Gary Mar was named President and CEO of the Foundation in April 2020. An accomplished and respected leader, Gary brings deep experience in government and business, and established expertise in CWF’s key policy areas in natural resources, trade and investment and human capital.

Prior to joining the CWF, Gary served as President and CEO of the Petroleum Services Association of Canada (PSAC), the national trade association representing the service, supply and manufacturing sectors within the upstream petroleum industry.

Gary has broad experience in government having served as a Member of the Legislative Assembly in the Province of Alberta from 1993-2007. During his time as an elected official, Gary held several Cabinet portfolios – Community Development; Health and Wellness; Education; Environment; and International and Intergovernmental Relations.

Gary then served as the Official Representative (Minister-Counsellor) of the Province of Alberta at the Canadian Embassy in Washington D.C., from 2007 – 2011. He worked extensively with the Alberta energy sector on advocacy issues in Washington DC and many U.S. States. Gary next served as the Province of Alberta’s Representative in Asia from 2011 to 2015. He led the province’s strategic outreach efforts from his post in Hong Kong and worked with Alberta’s offices in Beijing, Shanghai, Tokyo, Seoul, and Taipei.

Following his government service, Gary was an independent consultant working for both Chinese and Canadian companies seeking assistance with trans Pacific trade and investment. In 2016, he co-founded Canadian Advantage Petroleum Corporation which has successfully purchased heavy oil in Alberta and sold it directly to refineries in China.

Gary has been appointed as an Adjunct Professor at the University of Alberta School of Business in Marketing, Business Economics and Law beginning July 1, 2020. He is also an Adjunct Professor at the University of Calgary’s Haskayne Business School and is a public speaker at energy related conferences. In 2022, he was appointed as a member and chair of the Council of the Alberta Order of Excellence.

Gary completed a Law degree at the University of Alberta and practiced criminal, civil, corporate, commercial and real estate law in Calgary prior to entering politics. 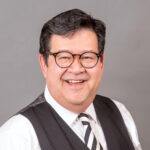