In June 2017, Canada was one of four Pacific Alliance observer countries invited to become an associate member of the bloc (along with Australia, New Zealand and Mexico). Below are five things you might not know about the Pacific Alliance – and why it’s an important trading relationship for Canada.

1) If the Pacific Alliance were a country, it would be the world’s 8th largest economy

The Pacific Alliance was created by Chile, Columbia, Mexico and Peru in 2011 as an initiative to increase trade with each other, and with Asia. With a combined GDP of close to US$2 trillion, if the bloc were a single country, it would be the world’s eighth largest economy – two spots ahead of Canada (we ranked 10th (pdf) with a GDP of US$1.5 trillion in 2016).

As a bloc, the Pacific Alliance is an important economy. In 2016, more than 75 per cent of Canada’s $48 billion two-way trade with Latin America was with Alliance members.

The North American Free Trade Agreement (NAFTA) re-negotiation and the Trans-Pacific Partnership Agreement (TPP) negotiation with the remaining 11 countries after the U.S. left the table have both captured a lot of attention, and rightfully so. But they have also overshadowed a third Canadian trade deal in the works – with the Pacific Alliance.

Canada already has bilateral trade deals with the four Alliance countries. But a requirement of associate membership, which Canada recently obtained, is to negotiate a trade deal with the bloc as a whole. In October, the first round of trade negotiations between Canada and the Pacific Alliance were held in Colombia.

A major focus of the Pacific Alliance is to become more competitive in trade with Asia. By completing a trade deal with this bloc – and thereby maintaining our associate membership status – Canada will signal we are serious about increasing trade, particularly with Asia. We should also be able to benefit from some of the integration measures of the group targeting penetrating Asian markets. For example, Canadian companies can use strengthened ties with the Pacific Alliance market to establish regional supply chains to trade with Asia, particularly in trade in services.

Traditional trade agreements focus on reducing tariffs and easing the movement of goods, services, people and capital. The Pacific Alliance does too, but the bloc is also building deeper co-operation through measures like integrating regulation and addressing emerging issues like the digital economy. The goal is to make the bloc more competitive in global trade, not just implement measures to make it easier to trade with one another. For example, the Alliance is working on one-stop-shop initiatives for foreigners looking to do business in the Alliance and implementing flexible rules-of-origin to incentivize business opportunities and regional value chains. 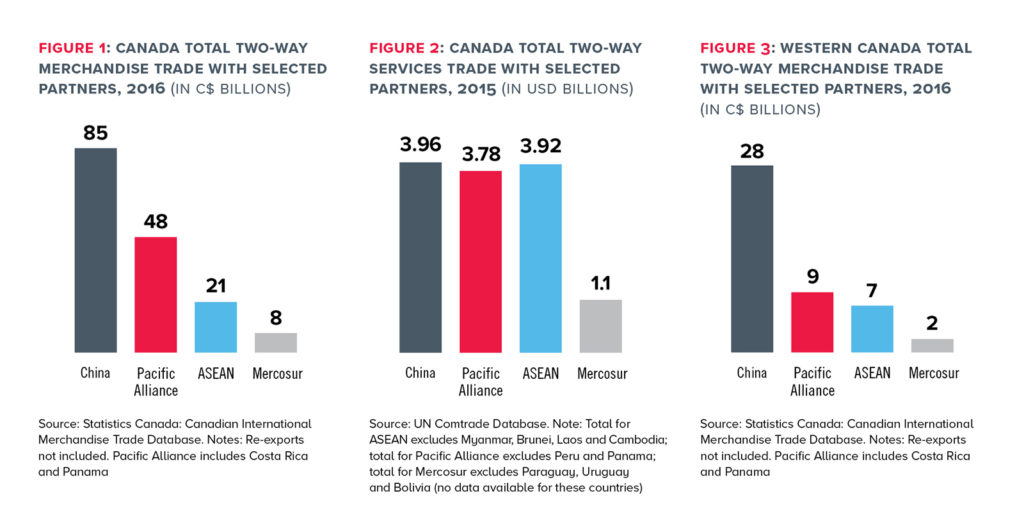