As the fourth round of North American Free Trade Agreement (NAFTA) renegotiations get underway, there is still understandable concern that U.S. President Donald Trump will make good on a threat he has made repeatedly since assuming the Oval Office: that the U.S. will terminate NAFTA.

With 76 per cent of Canadian goods exports (2016) and more than half our service exports (55 per cent in 2016) sent to the U.S., any disruption in our relationship with our largest trade partner would have serious consequences. While Trump’s bluster appears to be a negotiating ploy, it’s worth considering potential ramifications.

To skip to what a NAFTA withdrawal means for each western province, select it below
British Columbia
Alberta
Saskatchewan
Manitoba

Scrapping NAFTA is not as easy as it sounds. Many scenarios could unfold. The four below cover the range of possible outcomes. The bottom line is that under any scenario, a Trump withdrawal from NAFTA is likely to turn into a legal and political mess.

1) The President tries to end the deal but Congress doesn’t agree
NAFTA text is clear that any signatory may leave the pact after giving the other members six months notice of intent to withdraw from the agreement. But there are various opinions in the U.S. as to what would happen if a president unilaterally terminates a trade deal. The U.S. Congress passed legislation authorizing then-President Clinton to enter into NAFTA and integrate the measures into U.S. law. Congress also gave the president authority to withdraw from trade agreements – although it’s unclear that this is Constitutional. Under the U.S. Constitution’s commerce clause, Congress has the sole power to regulate foreign trade. If President Trump terminates NAFTA on his own, there would likely be a legal challenge that would quickly wind up in the Supreme Court. And many congressional Republicans, like Senate Leader Mitch McConnell, support NAFTA. Congress could also attempt to block funding for activities needed to carry out the withdrawal.

2) President and Congress agree to pull out of NAFTA, CUSFTA kicks in
If the president could get congressional approval to leave NAFTA, the deal’s predecessor, the Canada-U.S. Free Trade Agreement (CUSFTA), would kick into place.

CUSFTA measures froze when NAFTA came into force in 1994; if we revert back to CUSFTA, the agreement would enter year six. Tariffs on some goods would already be fully eliminated, while others would still have several years of reductions before they reached zero. NAFTA essentially rolled over the tariff eliminations made in the CUSFTA with added provisions for trade with Mexico. In this scenario, NAFTA would continue to exist between Canada and Mexico.

3) The U.S. withdraws from both NAFTA and CUSFTA, WTO trade rules govern trade
If the U.S. withdrew from NAFTA, it probably wouldn’t want essentially the same measures to continue governing its trade with Canada, under the CUSFTA. (Although it might, since a lot of its NAFTA concerns, like job losses, are directed at Mexico.) In addition to withdrawing from NAFTA, the Trump administration would also have to withdraw from CUSFTA to end all free trade deals with Canada; something that has not been discussed in the U.S. If the U.S. also broke the CUSFTA, then Word Trade Organization (WTO) most favoured nation (MFN) tariff rules would govern Canada-U.S. trade. The U.S. MFN average tariff in 2016 was 3.5 per cent (some goods have a WTO MFN of zero percent). NAFTA would continue to exist between Canada and Mexico.

4) The U.S. withdraws from both NAFTA and CUSFTA, imposes tariffs higher than WTO levels
It is possible the U.S. would impose tariffs higher than the WTO most-favoured-nation levels if it withdrew from NAFTA/CUSFTA. While WTO member countries agreed to reduce tariffs through the Uruguay Round Agreements of the late 1980s/early 1990s, the tariff reductions are not legally binding.

Despite the Constitution’s commerce clause, other U.S. laws give the president authority to impose tariffs during national emergencies and times of war. President Trump has mused about imposing 35 per cent tariffs on imports from companies that move operations out of the U.S., placing a 20 per cent tariff on imports from Mexico to fund construction of a border wall, and proposed a 45 per cent tariff on imports from China. It is unlikely the U.S. would impose tariffs this high on Canada, but it is possible we could face something higher than the 3.5 per cent average WTO MFN, or the 4 per cent average tariffs in place before the CUSFTA was implemented. If the U.S. imposed higher than MFN tariffs, Canada (and Mexico) may decide to retaliate, causing tariff escalation. It is also possible a U.S. withdrawal from NAFTA/CUSFTA would be combined with trade action against other countries, which could have trickle-down impacts on Canadian supply chains.

While it seems both legally and logistically difficult for the U.S. to withdraw from NAFTA, nothing should be taken for granted. It is worth considering the impact on western Canada’s merchandise trade with the U.S. under the scenarios above.

What trade data tells us about how the West would fare

The western provinces have varying levels of reliance on trade with the U.S. In 2016, 86 per cent of Alberta’s total exports were sent to the U.S. About half of B.C. and Saskatchewan’s exports go to the U.S., 53 per cent and 48 per cent respectively last year. Manitoba shipped 67 per cent of total goods exports to the U.S. in 2016.

The following charts show the top 10 merchandise exports to the U.S. for each western province by six-digit HS code, the most granular trade data publicly available. The corresponding tariff under the NAFTA, the CUSFTA and the WTO’s MFN give an idea of tariff barriers western goods exports would face if the U.S. broke both its trade deals with Canada. 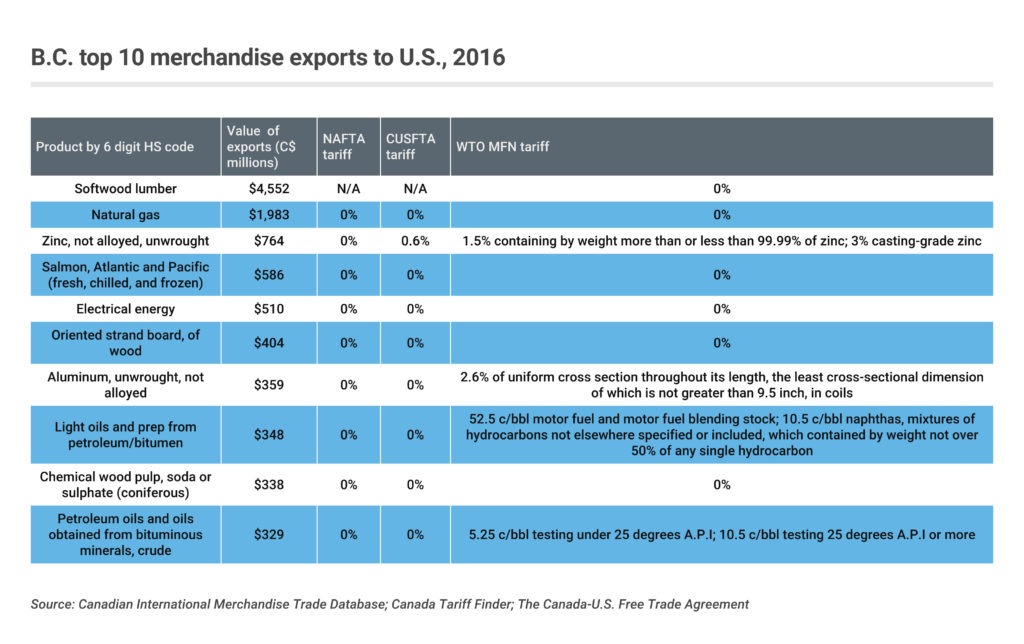 Softwood lumber is B.C.’s biggest export to the U.S., accounting for more than 20 per cent of the value of all U.S.-bound exports in 2016. Since softwood lumber is excluded from NAFTA, U.S. withdrawal would not directly impact U.S. tariffs on this commodity. However, the U.S. is pushing for the removal of NAFTA’s Chapter 19 dispute resolution mechanism in a renegotiated deal. If this occurs, it will have a major impact on the current (and any future) Canada-U.S. softwood lumber dispute. NAFTA Chapter 19 provides a process for any NAFTA member to appeal the imposition of countervailing or anti-dumping duties on a good implemented by another NAFTA partner. Canada has used a NAFTA panel multiple times since the 1990s to overturn U.S. imposition of duties on Canadian softwood lumber. Prime Minister Trudeau has indicated the removal of Chapter 19 from a renewed NAFTA would be a deal-breaker for Canada.

Only one of B.C.’s top exports to the U.S. (zinc) would be subject to a tariff under CUSFTA, because it is in the category of products that had tariffs phased out over 10 years. Since CUSFTA would kick back in year six, zinc exporters would pay decreasing tariffs for the next four years until the tariff is eliminated to zero. This would not be too burdensome as the CUSFTA tariff rate would be less than one per cent.

Four of B.C.’s top 10 exports to the U.S. would be subject to a tariff if NAFTA/CUSFTA were no longer in place. However, the tariffs are relatively low and would be unlikely to have a major impact on the trade of these commodities. 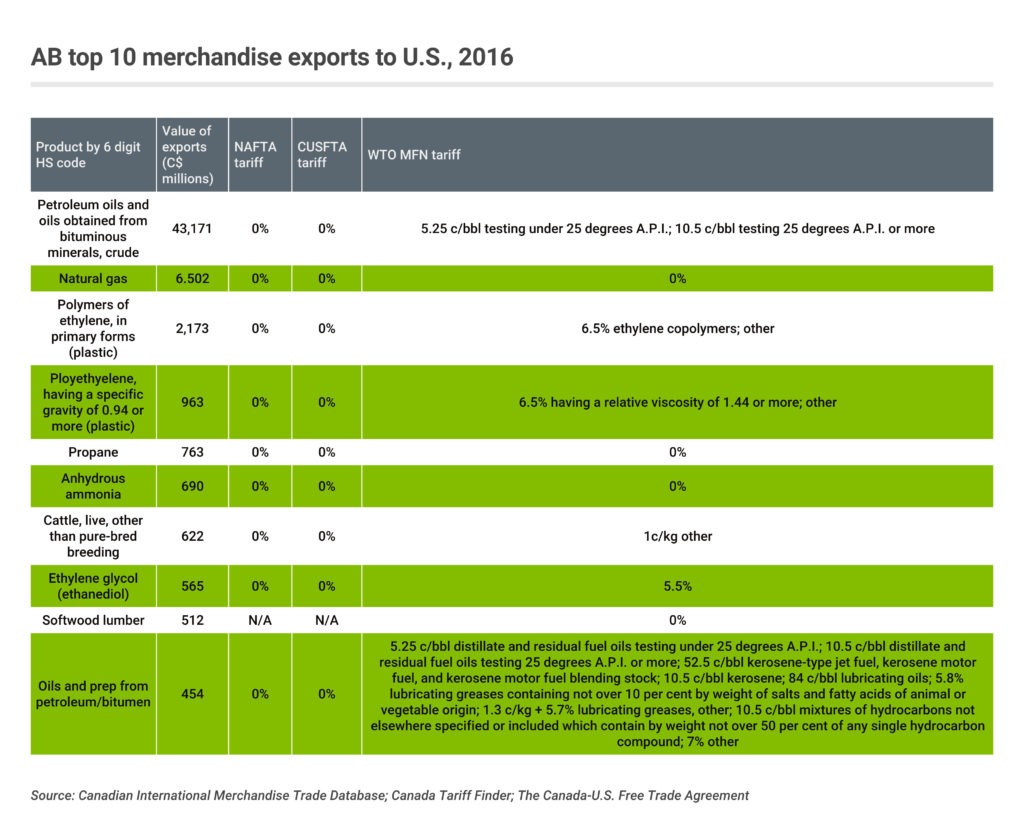 None of Alberta’s top exports to the U.S. would face tariffs under CUSFTA; these products either had all tariffs eliminated by 1993, right before NAFTA kicked in, or did not face export tariffs in the first place.

Alberta’s number one export to the U.S., petroleum oils, accounted for more than 60 per cent of total provincial exports to the U.S. in 2016. If the U.S. were to withdraw from NAFTA/CUSFTA, these commodities would be subject to a charge under WTO MFN. The exact charge depends on its API gravity measure – whether it is a heavy or light oil. Tariffs on Canadian crude exports to the U.S. will also negatively impact the American economy – Canada supplied more than 40 per cent of U.S. oil imports last year.

Like B.C., Alberta’s second largest export to the U.S., is natural gas. Natural gas made up nearly 10 per cent of Alberta’s exports to the U.S. last year, and would face no additional tariff barriers under WTO MFN rules.

Five of Alberta’s other top 10 exports would be subject to WTO MFN tariffs if NAFTA/CUSFTA were not in place; combined these commodities account for seven per cent of the value of 2016 exports to the U.S. 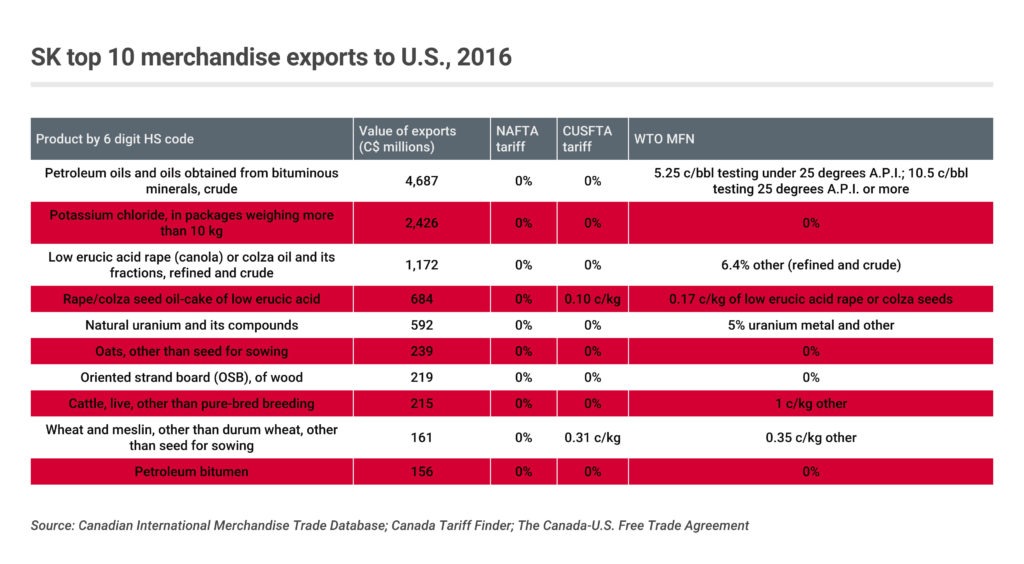 Two of Saskatchewan’s top exports to the U.S. would face tariffs under CUSFTA: rape/colza (canola) seed oil-cake and wheat and meslin. These tariffs would be less than 35 cents and would decrease down to zero over the next four years. Like Alberta, petroleum oils are also Saskatchewan’s top export to the U.S., making up 36 per cent of the value of the  province’s exports to the U.S. last year. Petroleum oils would be subject to a charge under WTO MFN rules, depending on its API gravity measure – whether it is a heavy or light oil. 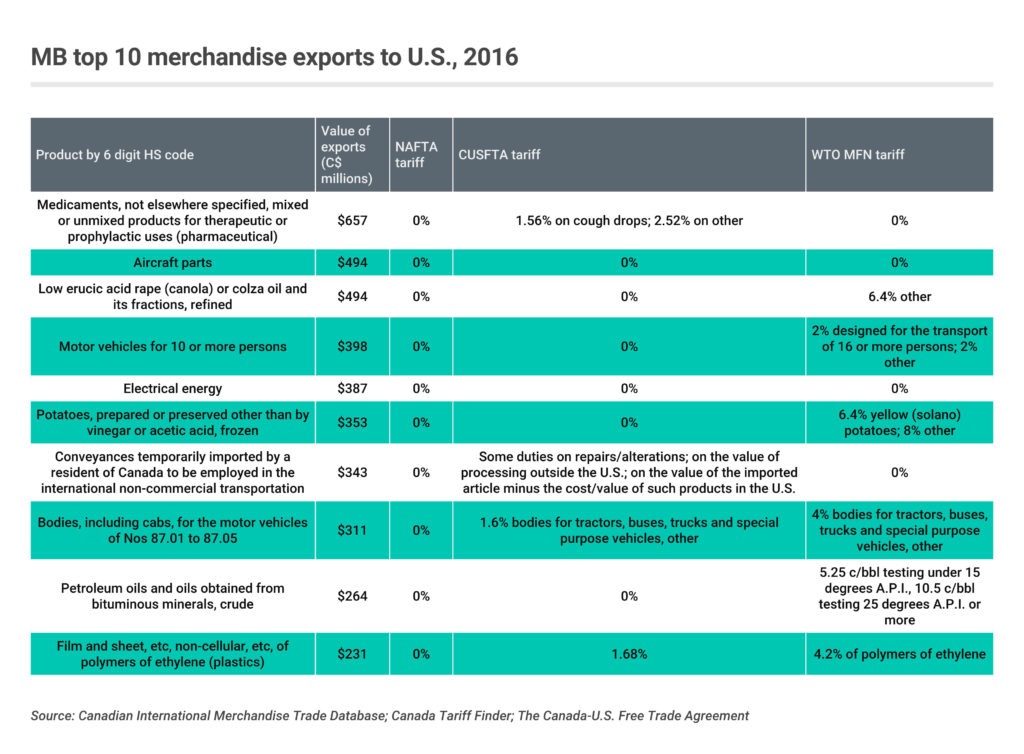 Manitoba’s top two exports to the U.S. – pharmaceutical products and aircraft parts – would not see any additional tariffs if the U.S. withdrew from both NAFTA and CUSFTA. If the U.S. left NAFTA but the CUSFTA remained in place, some pharmaceutical products, like cough drops, would be subject to minor tariffs that would decrease down to zero over the next four years.Aircraft parts would face no tariffs under CUSFTA. Combined, these top two exports account for 12.5 per cent of the value of total provincial exports bound for the U.S. last year.

Still, western provincial exports to the U.S. would not be crippled if Canada’s trade relationship with the U.S. were to revert to WTO MFN rules.  While tariff free-trade is the best scenario (under NAFTA or CUSFTA), the WTO MFN tariffs are relatively low.

But NAFTA brought about much more than the elimination of tariffs. It covers the trade of services as well as goods, fosters regulatory co-operation and enhances the movement of people. It also has a huge impact on the North American supply chain. Export Development Canada estimates 64 per cent of all goods and services trade between Canada and the U.S. is made up of intermediate inputs. In other words, raw materials, parts and services used by companies on both sides of the border in the supply chain.

If the U.S. abandons NAFTA, it is through these non-tariff measures that the biggest impact will be felt – in Canada, but also in the U.S.