In the lead up to the November 13 Olympic Games plebiscite in Calgary, debate over potential cost overruns has been fierce. And for good reason: Olympic/Paralympic Games are notorious for going over budget. But to understand the probability of a Calgary 2026 Games going over budget, it is necessary to understand why Games often go over budget. Our analysis shows that in fact, a Calgary 2026 Winter Games is unlikely to have cost overruns.

A widely cited report from Saïd Business School claims that all Olympic Games have had cost overruns since 1960, and that the average cost overrun for the Winter Games is 142%.

Those are two scary numbers. But they get a lot less daunting when understood in the context that Olympic cities are not all created equal. In fact, there are huge financial differences between them.

When you lump the Games together since 1960, you get a cost overrun average of 142%. But split them into relevant categories, and a different picture is painted. Since 1960, the Winter Games fall into three distinct categories: small cities/towns (less than 200,000 people); cities in undemocratic societies; and everyone else. The first two categories are prone to major cost overruns, whereas the last category is not. Small cities/towns do not have the fiscal capacity to host the Games, and that shows in the cost overruns. Games in undemocratic societies are often used to showcase the country to the world; no cost is spared, and citizens often do not have the ability to pressure their officials to keep costs under control.

Winter Games costs ranged from $US2015 21.9 billion, to Vancouver at $US2015 2.5 billion, for Games operations and venues. Overruns also demonstrated considerable variation – Lake Placid in 1980 was over 300%, but Vancouver was only 13%. So, that frightening average overrun number? Pretty much irrelevant to Calgary. 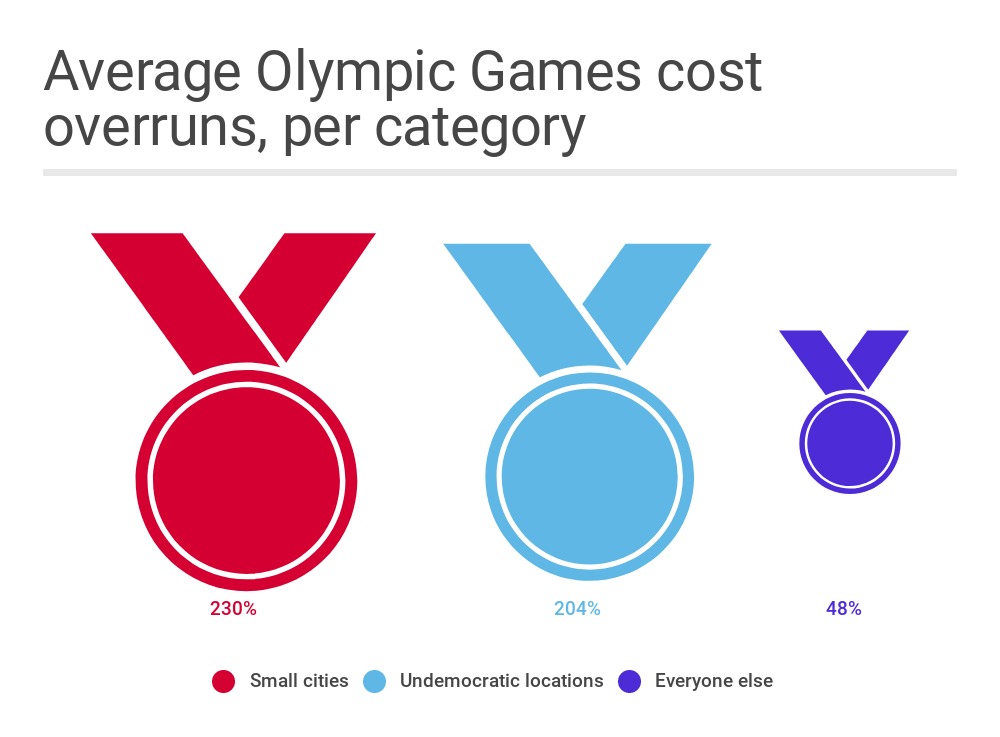 Operational spending is rarely at risk for overruns. A Johannes Gutenberg University/Pantheon Sorbonne study recently found that, in the last 20 years, all Winter Games operational budgets came in on budget or generated a surplus. Additionally, private sources (like sponsors) usually pay for almost all the operational costs, although governments typically have to contribute a relatively small amount for the Paralympic Games operational costs – for the Calgary 2026 Games Bid, this is budgeted at $218 million.

It is likely that the Olympic/Paralympic Games are notorious for this because the projects involved are so large (particularly for the aforementioned undemocratic locations, like Sochi). The Munk School reports that “International evidence suggests that the bigger the project, the more likely it will go over budget and miss its deadlines.”

This is one of the primary reasons why cost overruns appear less likely for a Calgary 2026 Games. The bid plan only calls for two new facilities – a field house and a mid-sized arena – with no associated transportation infrastructure tacked on to the bid. Calgary has a true advantage over other Olympic cities when it comes to cost overruns, because so much of what causes capital cost overruns is already built in Calgary – a legacy of the ’88 Games.

Beyond a modest and budgeted capital spending plan, Calgary has another card up its sleeve to ward off cost overruns: planning for the unexpected. After all, things can change between when a budget is written and when the Games are hosted. The Calgary bid tries to do this in two ways. The first is the level of detail of the budget – the more detail, the less likely there will be “surprise” unexpected costs. The Calgary bid budget has 30,000 line items, an unusually high level of detail for this early in the process.

Second, the size of the contingency fund in the budget is essential. The Calgary 2026 budget has $735 million (in 2018 dollars)/$1.1 billion (in 2026 dollars) in contingency, roughly 13% of the entire Games budget. Given this, and the small amount of capital spending needed for the Games, the potential for cost overruns shrinks.

The elephant in the room: security cost overruns

It is difficult to assess the likelihood of (a) because of the nature of security planning. Fewer details are released than for other parts of the Games for public safety reasons – too many security details revealed could help those who might want to attack the Games. The security budget for the Games was developed by a team of RCMP security experts. The recent reduction of the budget is disquieting, but presumably this was signed off on by the experts who developed that budget.

As for the second reason, It’s difficult to believe that the federal government would not step in if something of the magnitude of a terrorist attack affected Canada. Still, budgets – and negotiations – are often all about politics, and we’ve seen that aplenty in the recent debate over the security bill. Clearly, questions remain.

All of this is not to say that cost overruns will not happen in a Calgary 2026 Games. However, it is important to assess the potential for cost overruns in the appropriate context. Just because some recent Olympic Games have had high cost overruns, does not mean that Calgary will.