This tool shows Canadian businesses the expected impact of the CPTPP trade agreement on hundreds of Canadian exports to Japan. Find your product’s new tariff rate, expected export gains, and who the major global players are. Explore the results by using the dropdown below to search exports by HS category or keyword.

When Japan lowered tariffs for Canada under the Comprehensive and Progressive Agreement for Trans-Pacific Partnership (CPTPP), new export opportunities opened for Canadian businesses. The Canada West Foundation modelled and identified export opportunities to Japan to a granular and specific product level (HS6 code level), with a focus on Western Canada. Our work identified almost 200 sectors ­– including obvious ones like beef, pork, and coniferous wood and some that may otherwise be overlooked such as natural honey, frozen beef tongues and dried shelled peas ­– that would benefit from Japan’s tariff reductions. We even calculated how much trade is expected to divert to Canada and away from the top competitors for these products in the Japanese market.

Now, a new tool presents this data in an accessible way that allows Canadian businesses to track in detail tariff rates on potentially US$3.2 billion – or about US$1.7 billion for Western Canada – in new trade opportunities with Japan.

We are excited to present along with APF Canada the Canada-Japan CPTPP Product Competitiveness Tracker. The tool is intended to make it easier for anyone who does business in Japan, who wants to do business in Japan and who helps businesses interested in Japan visualize tariff differences under the CPTPP.

What is the CPTPP-Japan Product Competitiveness Tracker?

Use the tool to find products’ new tariff rate under the CPTPP, expected export gains, and who the major global players are for each product. The dropdown menu enables search by HS category or keyword.

Who should use this tracker?

By looking through the list of almost 200 products or searching for your particular product, you may get a glimpse of the final tariff for Japan under the CPTPP, the expected gain for Canada and each of the specific four western Canadian provinces, who your top competitors may be, and the amount diverted away from these competitors to your province.

How to use the tracker

To use this tool, simply enter the HS code or scroll through the list and select the product you are interested in (see image below).[1] Note that when entering the HS code, please ensure you only enter the HS number without the use of any periods (.) or hyphens (-). 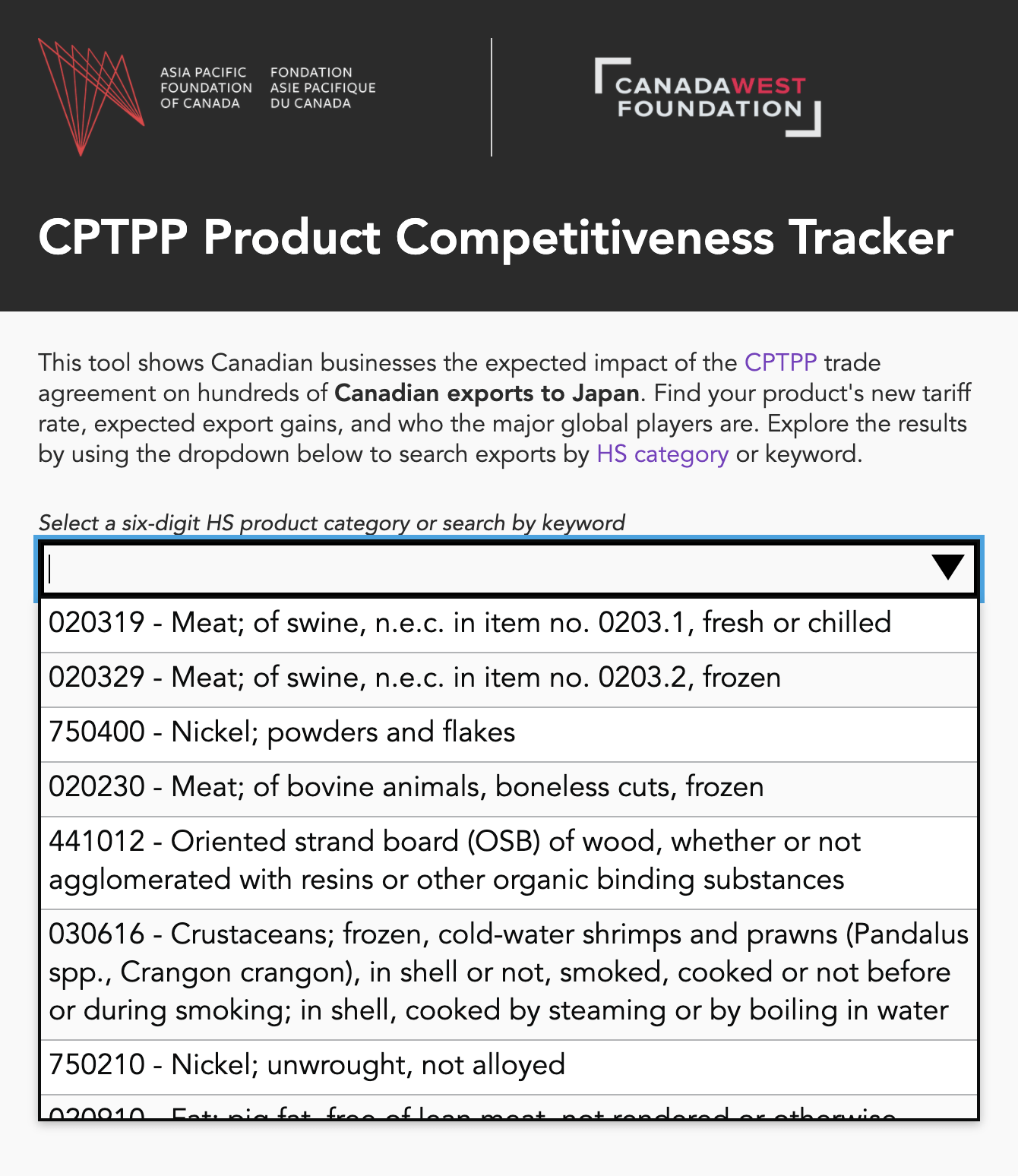 Once you have selected the product or entered the HS code, the tool will display the original or the standard Most Favoured Nation rate given to Canada prior to the CPTPP, as well as the final tariff rate assigned under the CPTPP. The tool will also display the total expected export gains in USD value and in percentage gain for Canada and specific Western Canadian provinces, relative to other major exporters (Canada’s competitors) to Japan for the specific products. What is interesting about this tool is that for every product identified, we have shown how much total exports to Japan Canada will displace its competitors because of the CPTPP agreement. Finally, there are footnotes that will guide you in explaining the figures displayed. 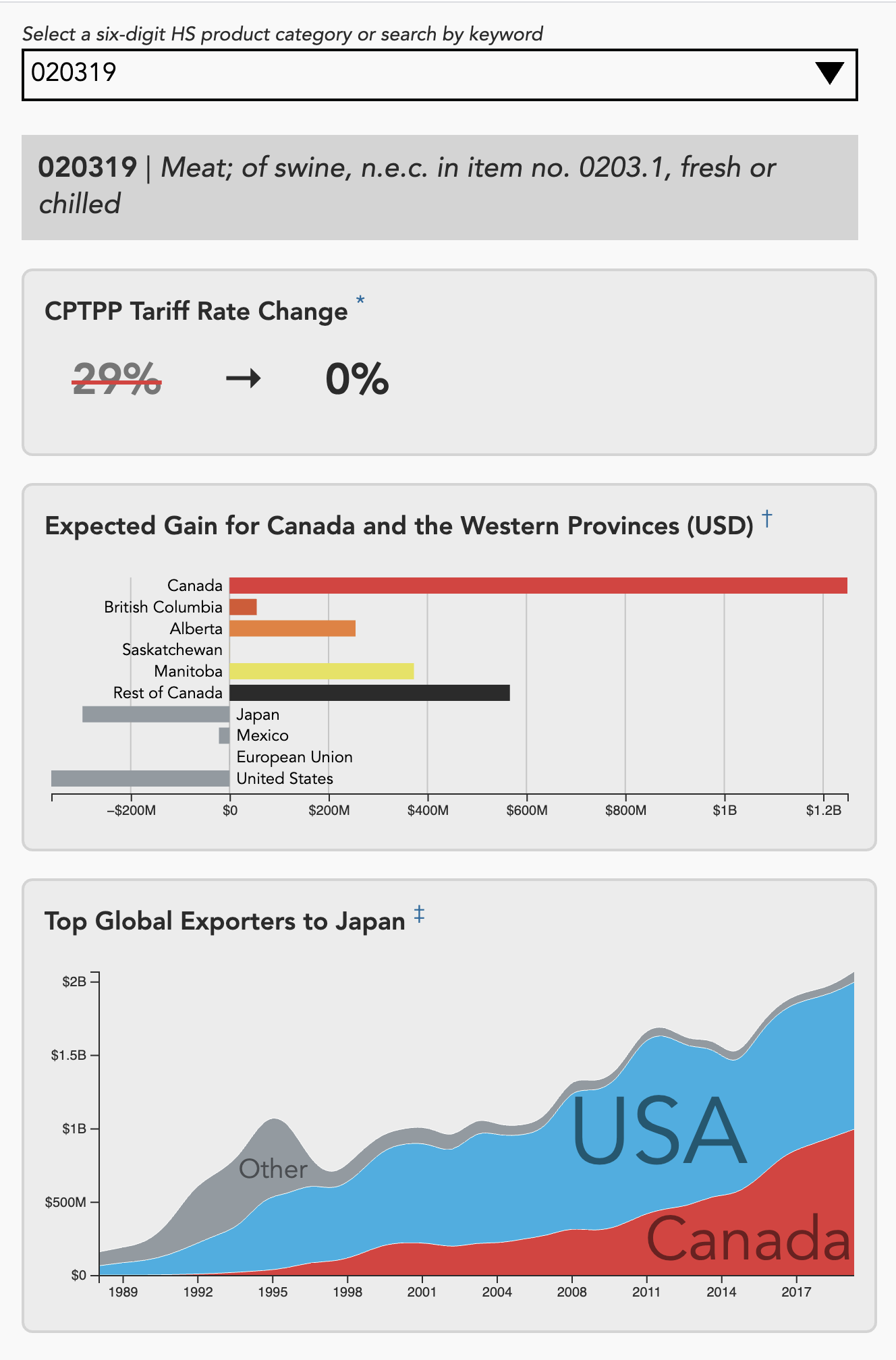 If you are a Canadian pork producer interested in fresh or chilled pork, simply enter the HS number 020319 into the bar or select the first item from the dropdown list (image 1). The tool will then display the original MFN tariff rate of 29% crossed out as well as the final tariff rate assigned under the CPTPP. The tool also displays the “Expected Gain for Canada and the Western Provinces” in current U.S. dollars (see image 2). I

f you put your cursor over each of the bars in the bar graph, it will display the total export gained by Canada to Japan under the agreement of US$1.2 billion as well as a 205% growth from Canada’s original export baseline to Japan. The baseline is calculated as the 2014-2018 five-year average baseline for Western Canadian and total Canadian exports to Japan for each of the products.

Subsequently, Manitoba sees the largest export gain in the West ($372.6 million or 131%) followed by Alberta ($254.7 million or 187%). The bar diagram also displays the amount in which Canada’s new export growth will displace some of Japan’s key suppliers of fresh or chilled pork (U.S., Japan itself and Mexico). The amount displaced is also displayed by putting your cursor over the bars beside the countries identified. Finally, the last diagram “Top Global Exporters to Japan” shows the key supplier to Japan for fresh or chilled pork and how much this export has grown over the last 30 years among the main suppliers.

A quick recap of what these numbers mean

Our report analyzed the total export gains for specific Canadian products to Japan with tariff reductions under the CPTPP, with a specific focus on Western Canada. Scheduled tariff reductions are one of the most obvious and direct impacts on trade diversion under a trade agreement. Exports such as canola seeds are, therefore, excluded from the study even though they represent the second largest Canadian export to Japan, because Canada already had zero tariff duty rates on canola seed with Japan prior to the CPTPP agreement.

We identified opportunities for products that Canada already heavily trades with Japan, the “usual suspects” such as beef, pork, and coniferous wood. Together, the three products account for approximately US$1.4 billion in growth opportunities or about 94.4% of the total gains. Identifying the impact and changes at a greater level of specificity within these usual suspects allows businesses and EPAs to identify opportunities and better defend against specific market competition. Getting better performance out of the usual suspects is one path to making better use of the agreement.

But the real opportunity for growing and diversifying exports lies beyond the usual suspects – with the less-traded, less-obvious and often overlooked opportunities, such as dried shelled adzuki beans, dried shelled peas, natural honey, frozen beef tongues, live horses and canola oil. Under the North American Free Trade Agreement (NAFTA), products in the less-traded category between Canada and Mexico grew to 30% from 10% of total trade over the first 10 years of the agreement. That growth, however, was slow and haphazard. Under the CPTPP, things could be different. If these products are identified early on, their growth can be accelerated, and EPA resources can be put to better use. Together, the less-traded exports identified in this report account for approximately US$458 million in Canadian export growth potential with Japan.

A tool for Japan, but a hope for more

This tool features Canadian export opportunities with Japan alone. But the possibility exists to expand this tool to encompass more CPTPP members – particularly Vietnam, Singapore and Malaysia (if it ratifies), as well as new members such as the UK or Taiwan who have shown interest in joining the regional block. This is particularly important as the CPTPP is the only regional trade agreement in which Canada is a part of in the Asia Pacific region, and there are growing tensions and competition in the region from Canadian competitors – from the U.S. and from other new agreements such as the Regional Comprehensive Economic Partnership (RCEP) in which Canada is not a part of.

If you or your organization have feedback about this tool or found it valuable, let us know, we would appreciate your input. If you are interested in helping us expand this tracker to include data from other CPTPP members, contact us and we would be happy to discuss how we can move forward together.

A special thanks to Dan Ciuriak (Ciuriak Consulting Inc.) and the Asia Pacific Foundation for collaborating with us on this project.

[1] You may also refer to our original report for the full list of products that are expected to see export gains with Japan under the CPTPP as a result of Japan’s tariff reductions, as well as details on the total additional market shares potentially contestable by Canada from its (TPP and non-TPP member) competitors. To compare Canada with the U.S. on where we compete in these items, please refer to the appendix II of the original report.