A permanent marketplace portal must be established, and the international rules-based trade system strengthened. But lessons learned can’t be forgotten.

By Colleen Collins and Carlo Dade
Published in Policy Options

For Canada, one of the disturbing realities arising from the pandemic response is the breakdown in the global, rules-based trade system when we needed it most for critical supplies to fight the pandemic. The damage done was not devastating but it is a call to action.

The US administration’s attempts to prevent a shipment of N95 masks from the 3M plant right across the border in Minnesota got our attention. But less noticed is that 68 other governments also imposed some form of export restriction on materials related to fighting COVID-19.

Critically for Canada, this list of countries includes almost all those from which Canada imports critical supplies as seen in table 1, below. All these countries except Mexico, Australia and New Zealand at some point during the crisis have had assorted forms of export restrictions on COVID-19 related materials. 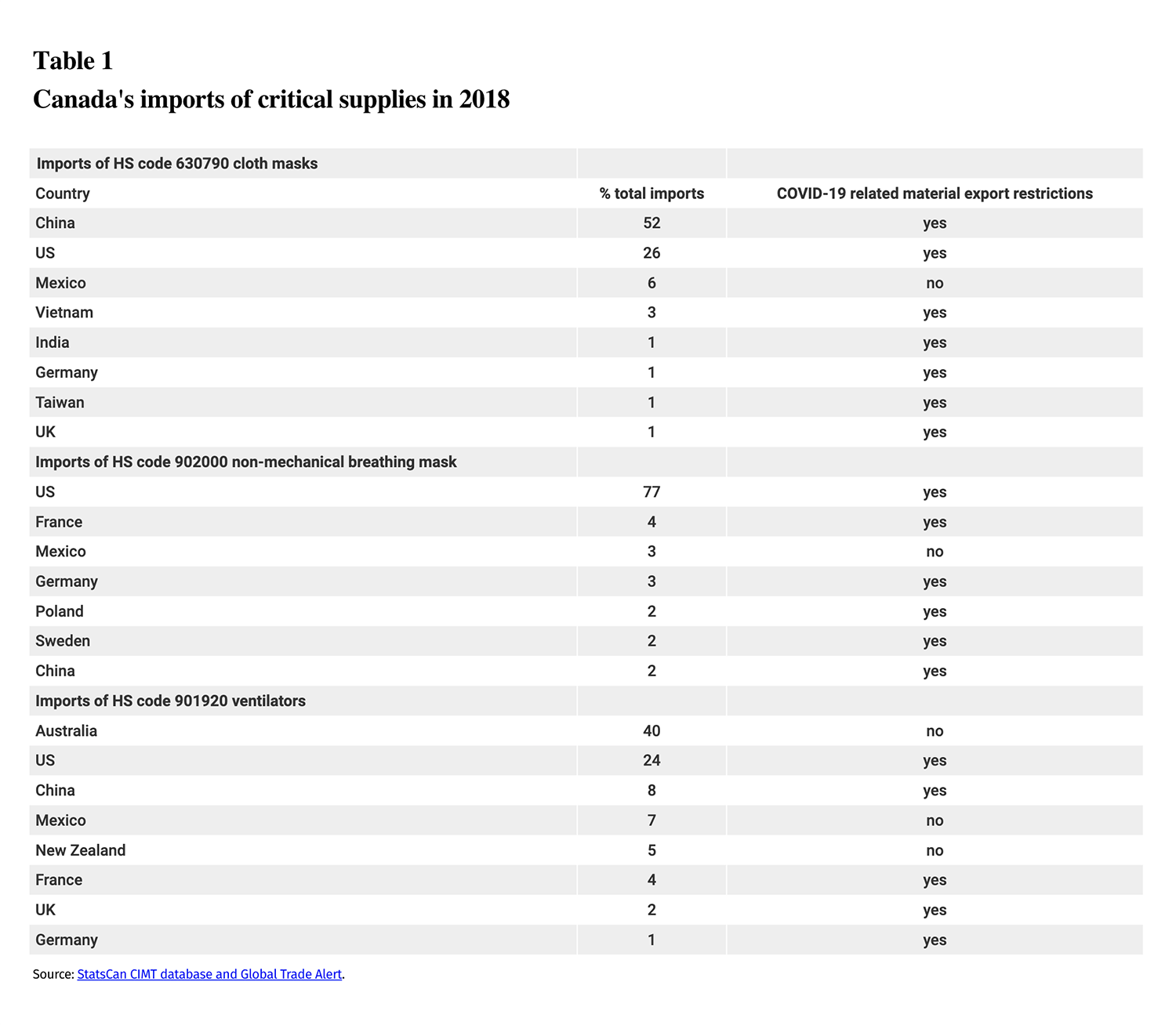 To be fair, countries such as Germany, China and Taiwan later relaxed export restrictions. But here, the exceptions just highlight a problem that precedes this crisis.

Canada has responded to other failures in global trade rules by doubling down on defending the liberal trade order of negotiated rules and institutions to enforce them. That system has increasingly come under stress and challenges, most notably from the US. Having the US throw Canada under the bus for normal trade matters like steel and aluminum tariffs is concerning and poses grave economic harm. But having the US and allies in Europe do so in the life-or-death case of a pandemic is altogether more serious.

Lesson number one for being prepared for the next crisis is the expectation that the US and other countries will behave this way again.

Canada will need to go beyond working to shore up global trade rules to prevent other countries, including the US, from restricting exports of needed supplies. We need a new Plan A.

This does not mean going it alone or abandoning defence of the global rules-based system. It means developing new options that can protect us from the knee-jerk protectionism that makes the international trade system unreliable in crisis and options that will not threaten the longer-term health of that system.

Specifically, in the case of pandemics, a new Plan A means building on the lesson from our current response – finding the capability to produce what we need within Canada in order to be less exposed to the whims and mercy of countries like the US and China. As a G-7 country, Canada has a large and varied economy that has within it the capability in times of emergency to shift production capabilities to produce what we need, as hockey equipment manufacturer Bauer, clothing producer Stanfield’s and many small businesses are doing.

These achievements are touted in the media and by the government, but that begs the question of how much more effective these efforts could have been if they had happened much faster and more efficiently.

Online marketplace portals to match buyers and suppliers have been around for years. What is needed is one that can be quickly turned on specifically for emergency situations at the local, provincial and national levels. One that will coordinate demand from public health and healthcare authorities as well as other essential services that require personal protection equipment and whatever other equipment (this time it’s testing for COVID-19, next time it could be dysentery or radiation) or treatment (this time ventilators, next time dialysis machines) the pandemic requires.

This portal would coordinate supply of finished goods and parts from existing suppliers and put out the call for new suppliers who have production capabilities to create capacity to produce goods required to fulfill demand. The same system could also be used to coordinate supply and demand of volunteers – identifying the competencies required at different locations.

While the digital aspect is new, the concept is not. During the Second World War, under the leadership of a private sector CEO on loan to the Department of Supply and Munitions, the “bits and pieces” program demonstrated that small business could pivot and scale up quickly to produce what was needed for the war effort.

This marketplace portal is different from, and goes well beyond, the government’s current response of convening a temporary business council to study the impacts of the virus.

Building the system is not a job for any one government. It should be led by supply chain “captains” with experience in purchasing from large and small providers of goods across the country and getting goods to communities across the country – including the North. It needs the participation of municipalities, provinces, the federal government, health authorities, public health and emergency planning agencies and front-line service providers. The military has critical capabilities to contribute to the design of such a system. Government procurement systems, designed with many objectives in mind, are not necessarily well suited for emergencies where speed is the overwhelming objective.

Finally, this portal needs to be placed beyond the ability of any government to neglect, cut or cut back when memories of the current pandemic fade, as arguably happened for many of the post-SARS recommendations.

For this to work, regulatory processes need to be accelerated where possible. Safety remains paramount, but speed is also critical. Heath Canada’s decision to amend its approval requirements on March 30 seemed like a long time coming in hindsight. We now know how to do better next time.

For this strategy to work, Canadian firms that switch to produce new items may need new intermediary inputs. To get inputs that are not available in Canada, the government can develop specific bi-lateral government-to-government emergency agreements with key suppliers rather than relying on existing trade agreements, or, worse, the global trade system.

Canada is a source country for some elements such as specialty fibre for masks that will be needed regardless the type of pandemic. Specialty agreements with specific countries in which the public has trust are key because they can be counted on to reciprocate any shipments of desperately needed goods. This mitigates public backlash over such exports that has arisen and been exploited by populists around the globe.

In a pandemic, the public does not want lectures about market efficiency and fairness, it wants certainty. Given the extensive list of countries including the US and EU members that have imposed export restrictions, finding candidates will prove difficult. However, Canada would not need a long list of such partners, and there are good candidates in Taiwan, Korea, Japan and others.

Updating the post-SARS North American Pandemic Plan to include prevention of export bans is needed but likely only aspirational under the current US administration. While special procurement agreements are not ideal and will harm the international rules-based system, they are better than blanket export bans and much better than relying on the naïve hope that countries, including the US, will miraculously behave better next time.

Canada needs to be prepared for the next pandemic. And to be clear, there will be more. In 2003, the world saw SARS, in 2009 we had H1N1, then 2014 saw Ebola and in 2018 it was MERS. Any one of these could have manifested differently and become the pandemic we now face. There are three lessons that emerge from our past brushes with a pandemic and our luck running out with the current crisis.

First, Canada needs to apply the lessons learned, in some cases for the second time, for pandemic response now while they are fresh, and consensus exists on solutions and the fact that the solutions must not disappear with time, domestic spending pressures or a change in government.

Second, these measures need to include proactive solutions such as establishment and funding for a permanent marketplace portal for emergency response.

Third, Canada has to stop relying on a faltering international trade order and the kindness of countries, including the US, that have shown a willingness to throw us under the ambulance as soon as things get tough.

While Canada should not abandon efforts to repair and strengthen the international rules-based trade system, that must be Plan B. That Canada and other countries did not learn the lesson of the potential for pandemic from SARS is not surprising. Knowing that a horse may kick you and that it will hurt informs your thinking; actually getting kicked changes how you operate. Failure to realize and take action based on what we know now will condemn the country to a getting kicked again when the next pandemic strikes.

This article is part of the The Coronavirus Pandemic: Canada’s Response special feature.