In this issue: What do experts see on trade? Can Canada now diversify? China and the CPTPP, the CWF Belt and Road Monitor

With the return of the two hostages, Michael Kovrig and Michael Spavor, there is much speculation on what trade relations between China and Canada will look like moving forward. This month, the brief did a roundup of expert views in the media to see what the perspectives were and how they differed. Our take? It’s going to be long process. Plus, a new blog post from CWF Trade Director Carlo Dade on what’s at stake for Canada with China’s bid to join the CPTPP.

What do experts see on trade?

While favourable views from Canadians on China have declined since 2016, trade has continued to grow. 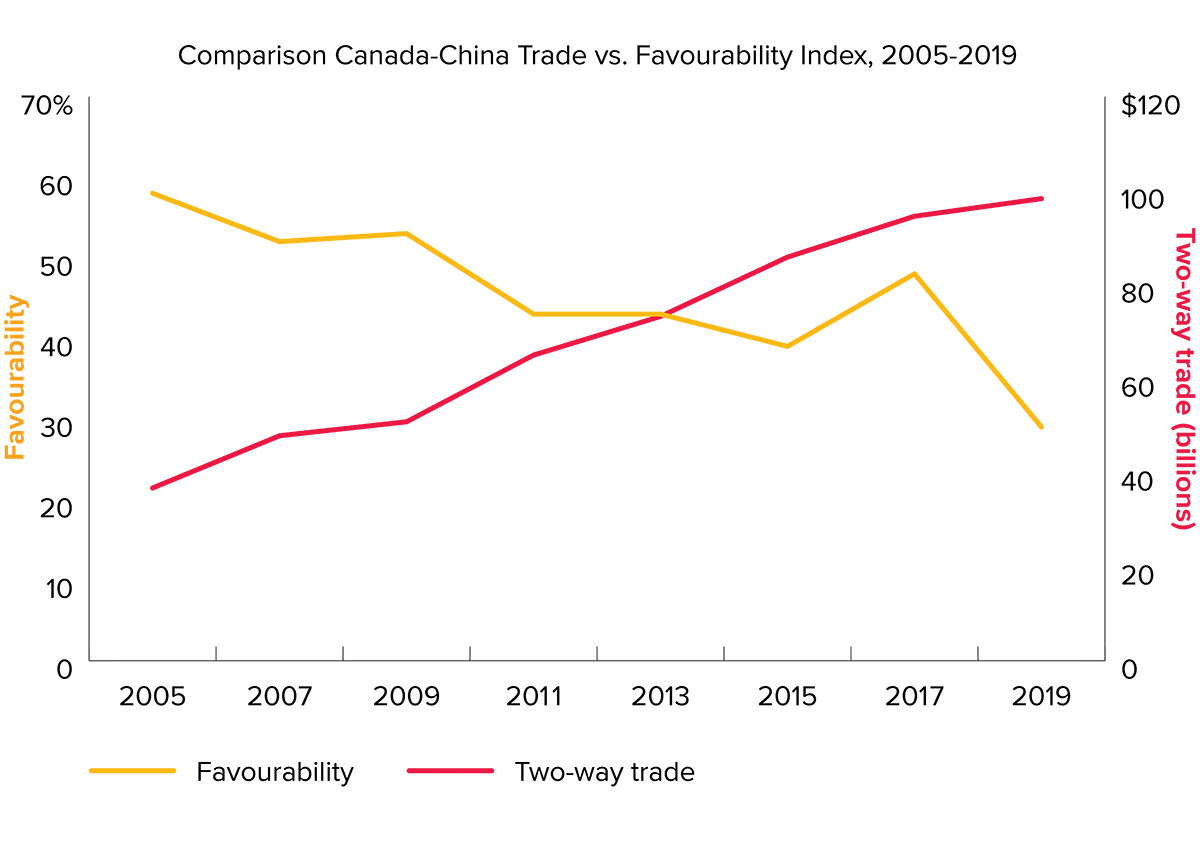 China’s Ambassador to Canada, Cong Peiwu, took steps to address Canada-China relations, particularly trade, in a recent op-ed.  Ambassador Peiwu pointed to this growth in trade between the two nations despite “stumbling blocks.” The Ambassador goes on to say “mutual respect at every level will ensure mutual benefit and win-win outcomes. This is the foundation of a strong, vibrant, and mutually beneficial China-Canada relationship.”

Canadian China experts are less resolved on a path forward. Sarah Kutulakos, Executive director and COO with the Canada China Business Council, Margaret McCuaig-Johnston, a former member of the Canada-China Joint Committee on Science and Technology, and Hugh Stephens, a senior fellow at the Asia Pacific Foundation of Canada provided some perspective in a recent Business in Vancouver article. Kutulakos sees an “[open] door to the resumption of normal economic and trade – as well as bilateral relations.” McCuaig-Johnston said now is the time “for all like-minded countries … to collaborate and come up with ways to [confront] China so they can’t get away with this.” Stephens said that “China continues to play an outsized role in global supply chains, and it continues to be an important export market for certain commodities. Neither of those roles are easily replaced.”

Anita Huberman, CEO for the Surrey Board of Trade, shared her views with 1130 News in Surrey. Huberman said “[i]t is time to look into other markets and to take a look at businesses and countries that have the same ethical values in doing business, and ensuring the safety of workers when they’re in someone’s country […]”

George McLeod, managing partner at Access Asia, made the case for Canadian companies to make use of Bangladeshi manufacturers over China. McLeod presents Bangladesh as providing both “market opportunities and no geopolitical risk.” However, reports of fires and building collapses in the country, in addition to wages, have raised concerns over working conditions in the country.

CWF’s own trade policy economist Sharon Zhengyang Sun discussed challenges in diversification from China with CBC’s Cost of Living podcast. Sun said “China is not yet a fully advanced economy but is already the second-largest in the world and it is expected to become the largest in the world.”  Sun went on to quote Carlo Dade, CWF’s Director of Trade and Investment,“[e]ven if Canada runs away from China, Canada will run into China because China is not going anywhere.”

Dr. Stephen Nagy, senior associate professor at the International Christian University in Tokyo and visiting fellow at the Japan Institute for International Affairs, commented in Nikkei Asia on how Canada and other middle powers can learn from Japan to counter China. Nagy said “Japan’s approach is both inclusive and exclusive, understanding that the best way to deal with China from a position of strength is to embed Japan into a series of multilateral frameworks that shape the rules of a free and open Indo-Pacific, in addition to shared institutional and national interests.” CWF is planning to host Dr. Nagy in Calgary for an upcoming discussion on Canada-Asia issues. Stay tuned.

China and the CPTPP

One area in which Canada is already running into China is in the Comprehensive and Progressive Agreement for Trans-Pacific Partnership (CPTPP). China and Taiwan have applied to join the 11-member trading bloc, which includes Canada. Wendy Cutler, vice president at the Asia Society Policy Institute (ASPI), reviewed the procedural steps needed for approval in a recent Diplomat interview. A key takeaway from the interview is that CPTPP is an “open architecture” agreement “with provisions encouraging expanded membership over time. The rationale is that as the membership circle broadened so would the reach of the high-standard rules, promoting them as the norm for the region.”

New Japanese Prime Minister Fumio Kashida recently expressed his skepticism that China could meet the standards in the trade agreement. A representative for federal International Trade Minister Mary Ng told Global News that China would have to meet the “high standard” of the agreement. Meredith Lilly, the Simon Reisman Chair in trade policy at Carleton University’s Norman Paterson School of International Affairs, said in the same article “I believe it would be a mistake for CPTPP members to water down the agreement to accommodate any new member.” CWF’s Carlo Dade told the Financial Post in a recent interview “[t]rade is three-times more important for us than it is for the Americans and twice as important than for the Aussies. So if we’re a global trader, having China agree to stronger rules is a win.”

Looking further than CPTPP, Dade also told Business in Vancouver that Canada should reconsider the Regional Comprehensive Economic Partnership (RCEP), which includes China. “The argument from [Ottawa] is that we don’t want to join a trade network that’s not as progressive as the CPTPP. But how do you negotiate bilaterally with Indonesia and India? Do you think Canada will have any chance in negotiating bilaterally anything that’s close to the CPTPP? The answer is hell no.”

Further reading: China and the CPTPP: Step One on Re-engaging, a new blog post from Carlo Dade analysing the economic pros and cons for Western Canada of China joining the CPTPP.

As the brief has covered many times in the past, China’s bans on Richardson and Viterra canola and dockage reductions were retaliation for Meng Wanzhou’s detention. Now that the detention is over, canola producers and others are left to wonder if China will reverse its bans and restrictions. Jim Everson, President of the Canola Council of Canada told CBC that “[o]ur goal as an industry is to have predictable, rules-based trade with China and for all our export companies to be treated similarly in China […] The announcement last week, I think, really provides hope that there’s a new environment there.” However, recent drought conditions have China looking to the Ukraine and Russia to offset the loss of Canadian canola imports.

China’s multibillion dollar Belt and Road Initiative (BRI), the state-backed global infrastructure development strategy, has the potential to enormously shift global trade through new levels of infrastructure and supply chain integration, in the Asia-Pacific region as well as globally. These shifts have the potential to alter global markets for Western Canadian-produced commodities. As part of Canada West Foundation’s efforts to track the Belt and Road Initiative and what it means for Western Canada, the China Brief will now include a section with relevant BRI developments. We welcome feedback as we continue to develop this new feature.

Research lab AidData, based out of William and Mary College in Virgina, have compiled a BRI data set which “captures 13,427 projects worth $843 billion across 165 countries in every major world region over an 18-year period.” The full report, with executive summary, analyzes the dataset and finds that “China now outspends the U.S. and other major powers on a 2-to-1 basis or more.” The report also notes that implementation challenges “are not equally prevalent across its overseas project portfolio. BRI infrastructure projects are less likely to face major problems during implementation when they are undertaken by host country organizations. They are also less likely to face major problems when they are implemented by organizations that are neither from China nor host countries.”

Reuters reports that a group of U.S officials have been “tasked with turning Build Back Better World (B3W), the international infrastructure investment initiative announced by the Group of Seven richest democracies in June, into reality.” Those officials have begun their listening tour in Latin America. A recent article from the Diplomat argues that the U.S. still has much to learn from China in terms of how to work in the region.

For Western Canadian interests, there is a lot to pay attention to when it comes to the BRI, B3W and Latin America. Earlier in September, oilprice.com Latin American correspondent Matthew Smith commented on the opportunity for China and Russia in oil rich Venezuela as the country struggles with “near-collapse and strict U.S. sanctions.” Smith also pointed to China’s broader aspirations in the region “in direct response to Washington’s ongoing presence in Asia and support for Taiwan. [This would] also strengthen China’s influence [in] a region traditionally under U.S. hegemony, giving Beijing greater access to South America’s abundant natural resources including oil, gold, silver, copper and rare earth metals.” China is Brazil’s number one trade partner and Brazilian beef makes up 40 per cent of Chinese beef imports. Argentina, similarly to Canada, helped offset barley exports to China after China put 80.5 per cent tariffs on Australian barley. Argentina saw record level exports as almost their entire export stock went to China.

In President Xi Jinping’s speech to the United Nations General Assembly, President Xi committed “to not build new coal-fired power projects abroad.” If China carries through on this commitment, it could mean projects totalling up to US $50 billion do not move forward. The move seems to reflect a broader trend in the coal industry. Teck Resources Ltd. is rumored to be looking to sell off its interior B.C. coal operations as the company looks to prioritize copper. MiningFeeds has more on the switch to critical minerals needed for tech and carbon-neutral projects here.