Quote of the week

One Big Story: China looking to ramp things up with Canada

• He also said that, while there are other factors, Canada’s focus on NAFTA is one of the reasons trade negotiations with China has taken a backseat.

• He also reiterated that China and Canada are far apart on some issues (like gender and labour issues, a.k.a. progressive trade) but he says that these have nothing to do with trade, and hopefully will not impede future talks.

• Additionally, the Chinese consulate in Toronto made the rare move of hiring a lobbyist, its first in Canada.

• Craig Brockwell of Solstice Public Affairs, has been hired to arrange meetings between the Consulate and senators and MPs to “promote various economic and cultural relations” between the two.

• Alberta Farmer Express, August 13: purchases of Canadian wheat by China more than tripled over the past crop year, and exports are expected to continue growing.

• Edmonton Journal, August 17: Canadian consumers eat more doughnuts than their Chinese counterparts, a fact at the front of mind for Tim Hortons during its China expansion.

• BCBusiness, August 17: China engagement remains a priority for the B.C. government, as two provincial ministers are interviewed on the province’s diversification strategy.

• The Western Producer, August 20: the selling prices for Canadian pork are falling due to the China-U.S. trade war, as Canadian prices are set based on trade war-hit American ones.

**A note for readers: we’re changing the “noise-o-meter” section to a quarterly update. Look out for our first quarterly noise-o-meter in the coming weeks!

• Last Thursday, China and the U.S. imposed new tariffs on each other, of about US$16 billion, deepening the trade war further.

• Infrastructure in the Canadian Arctic could be built using funding from China, argues one business expert.

• Lu Shaye, China’s ambassador to Canada, says China is “always ready” to restart free trade talks with Canada, part of a wide ranging interview on China’s relations with the world.

• U.S. President Donald Trump’s recent comments on China have raised fresh concerns in China that the ongoing trade war is a pretext to curb the country’s rise.

• U.S. concern over China’s technology acquisitions has led to the signing of new, tougher regulations on foreign investment.

• China’s Belt and Road initiative to connect China to the rest of Asia and Europe includes a “digital Silk Road” of communications infrastructure, which will shape the future of the Internet for years to come.

• The Director General of the International Food Policy Research Institute discusses how world agricultural markets will be impacted by the China-U.S. trade conflict in an opinion piece for Chinese state news.

• If China is unable to halt its recent swine flu outbreaks, the country’s pork industry will face “serious consequences,” according to agricultural analysts.

• China plans to be the biggest nuclear energy producer in the world. This has huge ramifications for the global nuclear industry – but China will face some unique challenges before it can get there.

• China has filed a complaint with the WTO over the U.S.’s import tariffs on solar panels.

• Even though China is working on upping its clean energy (check out a deep dive here), it is still wreaking havoc on the environment – it has hit its carbon “peak” 12 years earlier than it promised to in the Paris Climate Agreement (which went into effect in 2016).

• Carbon capture may be the way for China to both meet its growing energy needs and win its ‘war on pollution.’

• Last week, Australia joined the U.S. in banning Chinese smartphone company Huawei from its 5G mobile network, citing national security concerns – this has upped the pressure on the Canadian government to say whether or not it would follow suit with its intelligence-sharing allies.

• An op-ed argues that Canadian foreign policy towards China and other countries is more concerned with domestic audiences than international goals, a problem that crosses party lines.

• On the other hand, two other op-eds have argued that Canada is refraining from discussing environmental and human rights issues with China.

• A provincial investigation into alleged links between organized crime in China and a casino in B.C. has been called into question, as connections between the casino and a member of the probe have surfaced.

• DYK (I didn’t!): China has a team in the Canadian Women’s Hockey League? The Kunlun Red Stars joined the league last year, and finished in second place. They will be part of the league for this upcoming season, starting in October. 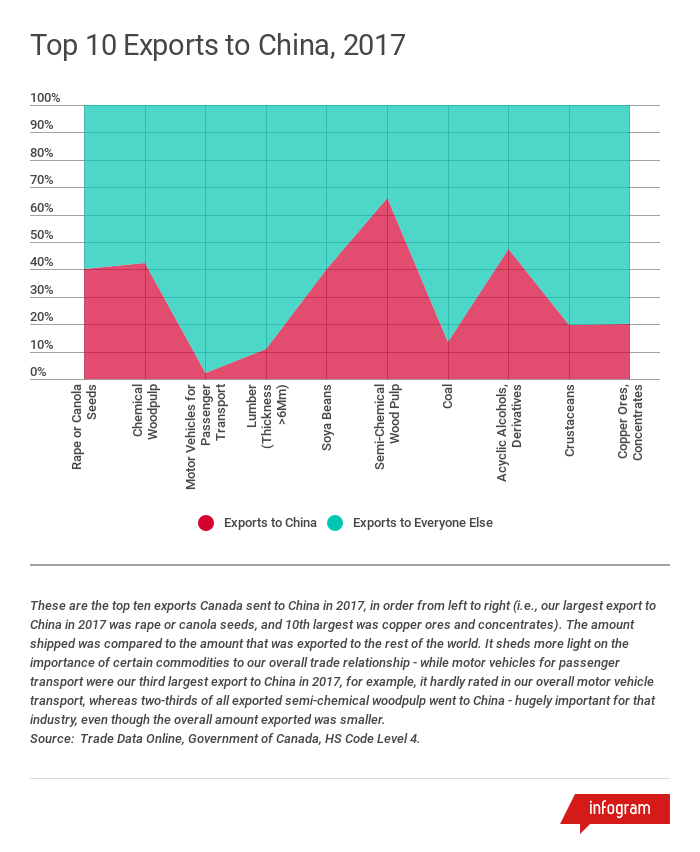 [i] Media measurement is provided by a third-party, independent media monitoring service. To be included in the noise-o-meter, “China” must be in the title, and one of the four western provinces somewhere in the article. While not a perfect system, this gives us an idea of how much China and the West are being discussed together.