IN THIS EDITION: Canada’s top cybersecurity official argues Canada can “handle” Huawei, new North American trade deal could have implications for a trade agreement with China, and a look at Canadian energy exports to China. Read more…

“[Beijing’s] approach is similar to their approach on general China-Canada relations. On one hand, China wants to have good relations with Canada. On the other hand, China has made a lot of progress in ensuring energy supply in recent years – through efforts related to the BRI in the Middle East, Russia, Africa, Latin America and even the United States.” – Wang Yong, director of the Center for International Political Economy at Peking University.

One Big Story: Canada and Huawei

Scott Jones, the head of the Canadian Centre for Cyber Security (Canada’s top cybersecurity official), says that he is confident “sufficient safeguards exist to deal with the risks of telecommunications hacking or spying by China, dismissing the need to follow the United States and Australia in barring Chinese telecom giant Huawei from next-generation 5G wireless networks.”

Back up: the United States and Australia recently blocked Huawei, a Chinese telecommunications company, due to national security concerns, specifically espionage. The United States has been pressuring members of the five eyes (in addition to Australia, includes the United Kingdom, New Zealand, and Canada) to ban Huawei.

Specifically, the concern is with a Chinese law that requires Chinese companies to “support, co-operate with and collaborate in national intelligence work,” when the Chinese government asks them to.

Canada’s reasons: Jones seems to suggest that Canada has a better system for testing Huawei equipment than Canada’s allies, and that Canada has “a very advanced relationship with our telecommunications providers, something that is different from most other countries.”

This is a different response than we saw in May, when the Canadian government blocked takeover of Aecon, a major Canadian construction company, by a Chinese company, citing national security concerns.

Just four days before the decision about Huawei came down, it was announced that Canadian carriers would be facing higher costs if they were barred from making deals with Huawei.

Response from Canada’s allies: Bewilderment. One American security expert said that, no matter how good your methods are to detect backdoors in Huawei’s 5G software, they would be extremely difficult to find.

Stories from the West:

• No trade deal but Premier Moe optimistic about China trip (Regina Leader Post, September 25):
Premier Scott Moe hailed his trip to China a success for Saskatchewan, highlighting that he advocated for important provincial industries, particularly value-added agriculture. China is the second-largest trading partner for Saskatchewan and is rapidly growing in importance.

• Escalating China-U.S. trade war an opportunity for B.C. LNG projects (Vancouver Sun, September 19): Canada’s West Coast LNG projects, when completed, are expected to be more cost competitive than American LNG when shipping to Asia. This is helped by the 10 per cent tariffs that China has put on American LNG. China is the third-largest importer of LNG in the world and is expected to become the largest importer soon.

• China will overtake the U.S. economy in less than 15 years, says HSBC, challenging Trump’s claim (Calgary Herald, September 25): not only will China be the world’s biggest economy by 2030, it is also expected to be the single biggest contributor to global growth for the next decade.

• There is a clause in the new U.S.-Mexico Canada Agreement (USMCA, replacing NAFTA) which could impact Canada’s ability to make a trade agreement with China.

• The USMCA requires signatories to notify the other countries if they plan to negotiate a trade agreement with a “non-market country.” Additionally, it “explicitly states that if one of the signatories enters into such an agreement, the other two have the right to withdraw from the USMCA with six months’ notice.” There is still much to digest with respect to the trade agreement and on this point, there’s much that remains unknown, but observers have suggested that this seems to be aimed directly at China. We’ll be watching as this develops.

• Canadian small business minister Mary Ng, who has some responsibility for the government’s trade diversification agenda, made her first international trip to Hong Kong and China in mid-September. Canada plans to boost exports to both, and to “woo investment” from the region.

• This article looks at how the China-U.S. trade war is hurting global growth – for Canada, this has recently meant a weakened dollar, and potential negative impact on export commodities.

• In an op-ed that argues that Premier Moe should accept that “clean energy is the future,” China was cited as an example of a country moving towards, and being a good market for, clean energy.

• The project: an LNG export terminal in Kitimat, B.C. The LNG would be exported primarily to Asia, with a capacity of 26 million metric tons.

• On a related note, China’s demand for LNG is expected to skyrocket between now and 2030, due to rising demand and environmental measures requiring cleaner fuels.

• China’s reaction to the Trans Mountain court ruling is bad news for Canadian economic interests, because “China’s thirst for oil has found other – and in many cases, more convenient – sources that Beijing can pursue without waiting for Ottawa to untangle the Trans Mountain issue.”

• This possible move elsewhere for oil is a “major issue for the Canadian oil sector… because the market remains the most attractive in Asia for Canada’s energy exports.”

• This article argues that Canada’s trade outreach to China is creating problems in NAFTA negotiations.

• Our own Carlo Dade argues that Canada’s progressive trade agenda is dead, and this will make negotiations with China easier. 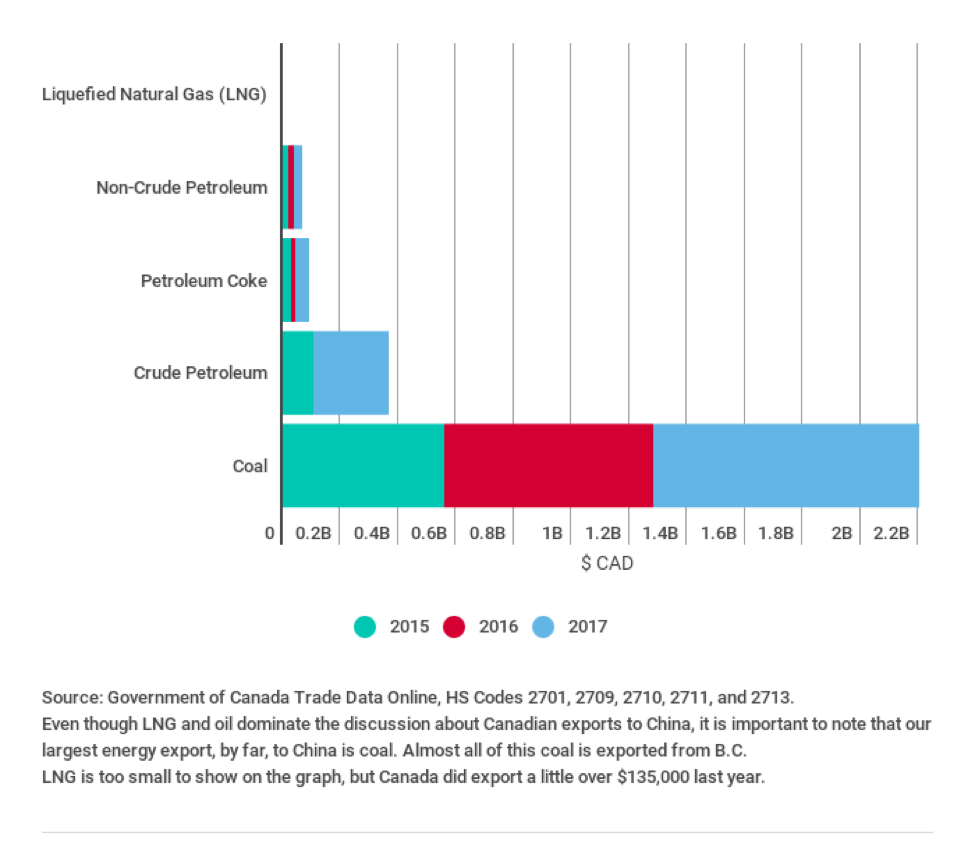 • Trump accuses China of 2018 election interference: “They do not want me or us to win” – Vox, September 26

• I would love to visit here!

• In the struggle for AI supremacy, China will prevail – The Economist, September 28