In this edition: The Meng Wanzhou saga carries on, Huawei investment in Canada rises, and Japan thinks it’s high time that Canada move its trade focus from China to Japan.

“As China under the leadership of President Xi Jinping and the Chinese Communist Party sees itself re-emerging as the world’s natural, irreplaceable superpower after two centuries of ‘humiliation’ at the hands of Western nations, engagement with China cannot and should not be avoided. But what the often sad and difficult story of Canada’s 150 years of involvement with China tells us is that we need to find a less self-delusional, more courageous, and more intelligent way of dealing with the new version of the Middle Kingdom.”

— Jonathan Manthorpe, Claws of the Panda

Has anyone else read this book yet? Let me know what you think!

Even though little has really changed in the last few weeks, Canada is still on tenterhooks when it comes to Meng, Huawei, and the relationship with China. (For recaps, check out the last several China Briefs).

Expect things to heat up this week: the Canadian Justice Department has until Friday, March 1, to decide whether or not to authorize extradition proceedings – in other words, whether the charges Meng faces meet the basic qualification for extradition. If this is authorized, Meng will appear in court March 6 to determine when the extradition trial will start. The trial itself, if it happens, will last for an indeterminate amount of time, so no word on how long this will drag on. Stay tuned!

• Business in Vancouver, February 14: this op-ed argues that Canada and China, quite simply “do not need to be friends” to work together to grow our economies.

• Vancouver Sun, February 13: Huawei’s push for soft power influence in Canada – for example, being the leading sponsor of Hockey Night in Canada – has raised debate.

• If Canada ends up banning Huawei from its 5G networks, there is the potential for Huawei to sue the Canadian government, under the terms of the Canada-China Agreement for the Promotion and Reciprocal Protection of Investments, signed 2012.

• Even in light of all that has happened in the last couple months, Huawei has continued to grow its presence in Canada. The company announced that it will add 200 more R&D jobs in Canada (a 20% increase) and increase its R&D spending in Canada by 15%.

• President Trump may have caused a few headaches in Canada, but it seems he is inadvertently responsible for boosting Canadian lobster trade to China (China imposed a 25% tariff on American live lobster, in retaliation for tariffs the Trump administration had slapped on earlier).

• According to consulting behemoth McKinsey & Company, Canada should perhaps keep its focus closer to home if it wants to continue to grow trade, and spend less time focusing on China.

• Canada’s Minister of International Trade, Jim Carr, said that the government expects Canadian business interest in China to slow, amid the current tensions.

• Japan’s Ambassador to Canada, Kimihiro Ishikane, said that it is “high time“ that Canada moves its trade focus away from China to other Asian nations.

• President Trump has again suggested he will interfere in the Meng case as part of the trade negotiations with China.

• Even though the Meng/Huawei case has had significant impacts on the China-Canada relationship, it may be just an example of how China does business internationally now, according to a new book.

• According to Chinese government documents, more Canadian multinational companies are being pressured to label Taiwan as part of China.

• This op-ed describes how Chinese companies launder money in Canada.

• This article describes why Chinese immigrants in Canada “live in silent fear” of the Chinese government.

• As part of trade negotiations with the U.S., China is proposing to buy an additional $30 billion a year of American agricultural products. 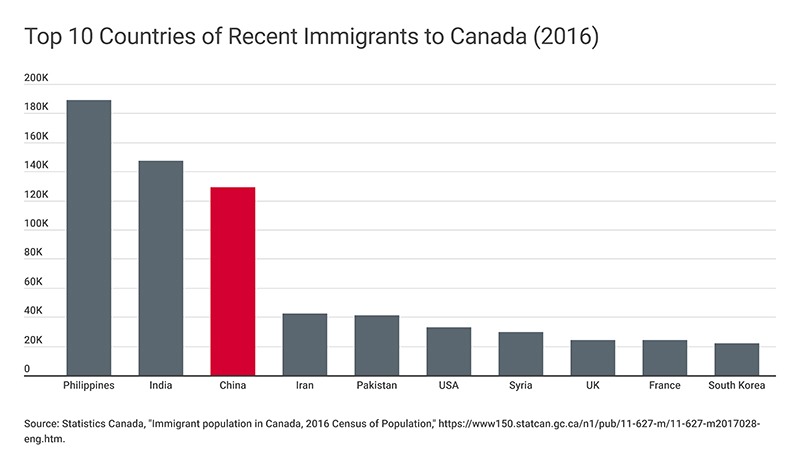