In this edition – China’s ban of Canadian canola drags on, and more crops fall on the chopping block; China’s investment in Canada decreases by nearly half; and Canadian universities debate their relationship with China.

“You buy from Canada, we’re going to make your life difficult.”

One big story: the canola shakedown continues, and more crops are added to the chopping block

China’s blockade of one of Canada’s most important agriculture exports, canola, continues – with no signs of letting up. Additionally, Canadian exporters of peas, soybeans, and pork are now seeing “mysterious delays and inexplicable rejections,” leaving exporters scrambling.

Farmers are heading in to seeding with worries of whether there will be a market for their canola – and potentially, other crops – when it’s time to harvest.

Last month, the Canola Council of Canada announced that “Chinese importers are unwilling to purchase Canadian canola seed at this time.” Additionally, two major Canadian canola exporting companies (Richardson International and Viterra) have had their licenses to export canola officially revoked. (Find more background in the last two China Briefs). The Chinese government insists this is because of pests in canola, but many experts believe this is punishment for Canada’s arrest of Huawei’s CFO upon extradition request by the United States.

The price of canola fell significantly, from a high of more than $500/tonne in December to $440.60 a tonne now – a 12% drop. The price of canola hasn’t fallen this low in nearly five years. This is because China is Canada’s largest purchaser of canola: in 2018, nearly $4 billion in canola was exported to China alone, about 40% of total exports. Canola shipments originally destined for China have been forced to sell elsewhere at a discount.

Other crops, like soybeans and peas, are being held up in customs for weeks in China, causing Chinese buyers to avoid buying Canadian products.

Why is canola so important?

Canola particularly important for the Prairies. There are 43,000 farmers in Canada who grow canola; close to 99 per cent of canola is grown in Alberta, Saskatchewan, and Manitoba. In 2017, canola contributed $10 billion in total crop cash receipts – 28 per cent of the Canadian total and 45 per cent of the Prairie total, far more than any other crop. It also accounted for more than a quarter of a million direct, indirect and induced Canadian jobs. 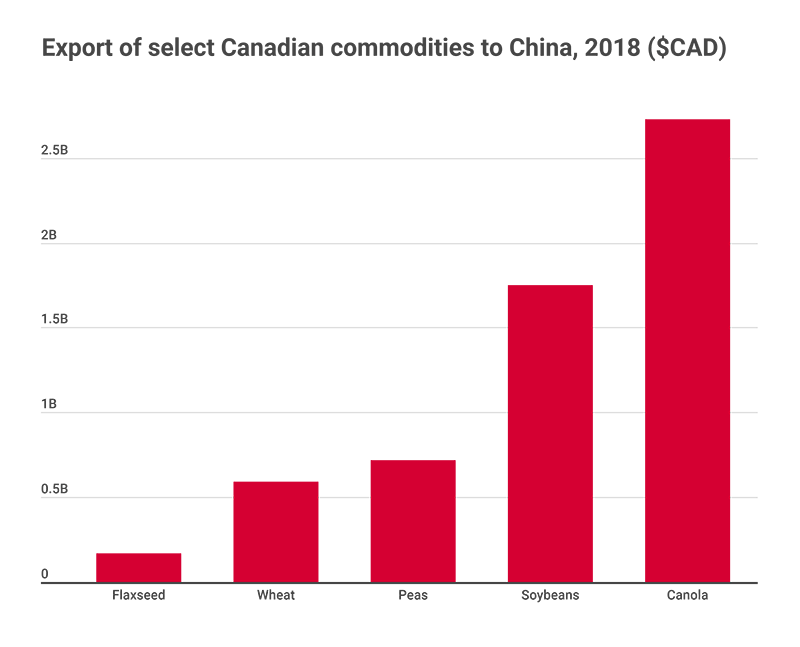 What are governments doing?

On March 31, Agriculture Minister Marie-Claude Bibeau sent a letter to her Chinese counterpart, asking if Canada could send a delegation of technical experts to China to talk about the pest allegations China has made of Viterra’s and Richardson’s canola. However, China has not yet agreed to receive this delegation

The Saskatchewan government has spent significant time focusing on canola. Premier Scott Moe has asked the federal government for high-level talks to push for a political solution, research partnerships to show Canadian canola is safe, and capital assistance for farmers. When he made these requests of the federal government about a month ago, he said he was confident that the issue was being taken seriously, but recently sent a letter to Prime Minister Justin Trudeau saying he was frustrated that there has been “no concrete support” for the industry, and emphasized the need he sees for capital assistance.

Opposition leader Andrew Scheer argues that Canada should, among other things, pull the hundreds of millions of dollars Canada has contributed to the China-led Asian Infrastructure Investment Bank.

David McNaughton, Canada’s ambassador to the United States, said that he asked the American government for help with Canada’s dispute with China, but the Americans are unwilling to do so (although it was unclear which aspect of the Canada-China relationship he asked for help with). McNaughton expressed his disappointment, saying that “We do expect the United States, in that we are such a strong ally of yours, we do expect you to be a strong ally of ours, particularly when the actions that are being taken against us are in retribution for things we did at your behest.”

Statistics Canada released its estimation of how much of the major crops will be seeded across Canada on Wednesday. Nationally, farmers are expected to plant 6.6% less canola than in 2018. 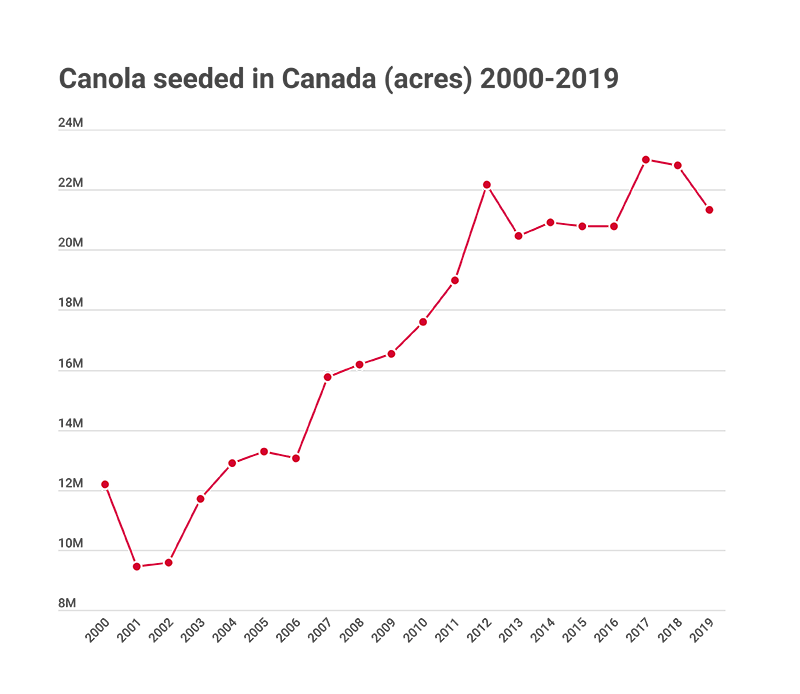 I take a deep dive into the China-Canola canola conflict in the latest What Now? policy brief, where I make the case for the urgency of the situation, for the Prairies – and for all of Canada. I argue that, while there is no silver bullet to end the canola dispute or solve Canada’s broader economic and political vulnerability when it comes to China, Canada has a handful of practical steps it can take. These include trying to get China to engage on a non-tariff barrier agreement for the agricultural sector; diversification of countries where Canada sells canola; diversification of the canola products sold, which would have the added benefit of creating more jobs and economic growth here; and a long-term China strategy. Each has its own challenges, but may create more stability for Canada’s canola industry right away, and provide a path to improve the Canada-China economic relationship in the future.

• University of Saskatchewan President Peter Stoicheff said that, after long discussion, his university has decided that “Canadian universities should stay the course with their relationships despite the political issues that are circulating in and beyond China.” Chinese students make up the largest proportion of international students at the U of S (40%).

• China will be one of the countries attending the inaugural African Swine Fever Forum being hosted in Ottawa. African Swine Fever was discovered in China last year, and Chinese officials say the outbreak has affected more than 100 operations, with at least one million hogs being culled. However, industry experts dispute these figures, saying the outbreak is likely worse. China is the world’s largest pork consumer, accounting for 49 per cent of the global market.

• China’s investment in Canada fell by 47 per cent in 2018, compared to a 40 per cent drop globally. According to Director of the University of Alberta’s China Institute, Gordon Houlden, “Canada for the moment is seen as less attractive in part because of past purchases that did not pan out well, especially in the energy sector, and, in part, some regulatory concerns.”

• As part of the trade negotiations with the US and China, China may agree to streamline its process for approving import of GM crops, which could make Canada a lot of money. China is the only country in the world that requires new genetically modified crops to be approved in the country of origin before it will consider approving it in China, and Canada does not commercialize new GM traits until approvals are in place in all key export markets – it takes six to eight years to get something approved in China currently, whereas in other countries (like Canada) it typically takes two.