In this edition: China’s block of Canadian agricultural exports drags on; the U.S.-China trade war shows no signs of resolving; and Huawei launches a full-court public relations campaign in Canada.

There is no shutting the door to China… But we will have to be much more thoughtful about how we do this, moving from comprehensive engagement to something smarter and more tailored to our objectives and vulnerabilities. The days of indiscriminately encouraging China-bound travel and pumping Canadian delegations into China, a state that capriciously detains foreigners, are over.

It looks like there’s no easy solution to Canada’s troubles with China, and there’s no indication it will resolve itself soon. (Check out the last two China Briefs for a detailed dive into the issue).

• Relations between Canada and China have been cooling for awhile. In May 2018, Ottawa blocked the takeover of Aecon by a Chinese company, due to national security concerns, meanwhile, the federal government has waffled over whether Huawei (a major Chinese telecom company) will be permitted to build Canada’s 5G network.

• In December 2018, Canada arrested Huawei CFO Meng Wanzhou upon extradition request of the United States. This prompted pushback and retribution from China, which included public rebukes of Canada’s arrest of Meng and the arrest of two Canadian citizens on spurious charges, Michael Spavor and Michael Kovrig.

• Until about March, Chinese government limited its response to the political and humanitarian realms. In mid-March, however, the first economic pushback started: the Canola Council of Canada reported that “Chinese importers are unwilling to purchase Canadian canola seed at this time.”

• Following this, other Canadian exports to China have run into “mysterious delays and inexplicable rejections” – peas, soybeans, and pork.

• Canadian leaders have not been able to communicate with their Chinese counterparts since the arrest of Meng on December 1, with their requests going ignored. Five Canadian federal ministers have requested conversations with Chinese officials since then.

• On the sidelines of the G20 last night, however, Agriculture Minister Bibeau was able to speak to her Chinese counterpart about the blockade of canola exports to China.

• It was revealed that Canadian leaders have not been able to communicate with their Chinese counterparts since the arrest of Meng on December 1, with their requests going ignored. Five Canadian federal ministers have requested conversations with Chinese officials since then.

• The Meng extradition trial, which was set to get underway last week, was postponed until September.

• Canola farmers are facing more problems due to the Chinese blockage of canola: Canadian farmers will have an “all-time record high” stock of unsold canola this year. This is expected to have a “dampening effect” on prices. There have also been less futures contracts for canola recently. 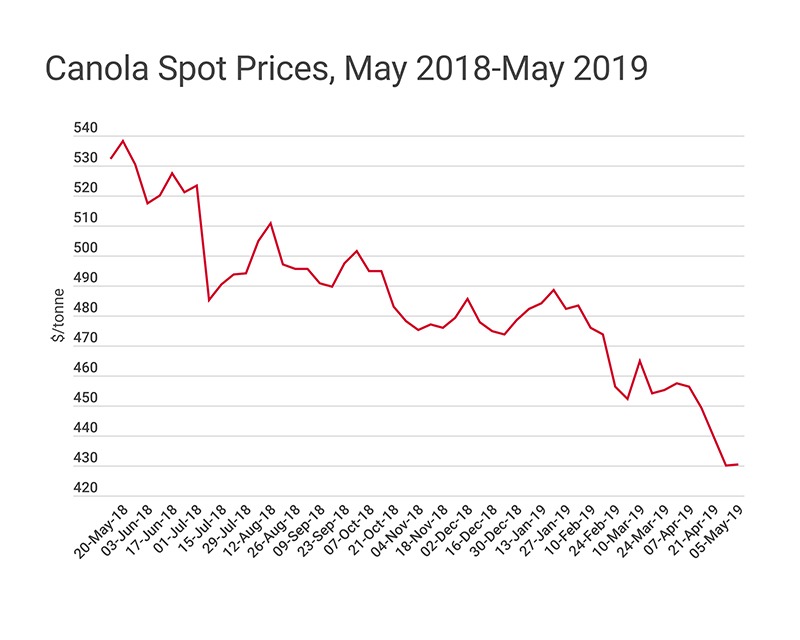 What can be done about it? Well, a lot of ideas have been floated

Some say that the relationship with China needs to be rethought:

• David Mulroney, former Canadian ambassador to China, argued in The Globe and Mail that Canada needs to learn from the current episode with China on how to shape our future relationship with China.

• Something we at CWF heartily agree with!

• Jonathan Manthorpe argued a slightly more positive note in iPolitics – that this is a good opportunity for Canada to recast its relationship with China on a more “realistic” basis.

Some people talk about the importance of the U.S.:

• Lawrence Martin in The Globe and Mail argued that, in dealing with U.S. intransigence on helping Canada in the current crisis, they should be reminded of the Iran hostage crisis.

• Heather Scoffield argued in The Star that the best, and perhaps only, hope for Canada getting out of this dispute with China rests with the United States.

• An editorial from the Toronto Sun argued that we cannot wait for the United States to protect Canada, but must take actions on our own.

Some talk about what Canada’s options are:

• Lawrence Herman argued in The Globe and Mail that Canada is in a trade war with China, and we must use trade war tools, such as the Customs Tariff Act to apply trade restrictive measures, in order to counter China.

• Susan Riley argued in The Hill Times that Andrew Scheer’s ideas about deploying retaliatory measures against China are not the approach Canada should take, because “We need China and China doesn’t need us. Retaliating can do a lot more damage to Canada than we can do to them.” (ß Susan quoted me from an interview I did with Maclean’s)

Some talk about lessons Canada should learn:

• Amy Karam argued in The Hill Times that China’s anger with China is not just about Meng Wanzhou, but also because in the last few years, “Canada mistakenly showed up with past assumptions, its own values, and took a lead in telling China how it wanted the trade game to be played,” angering China.

• An editorial from The Globe and Mail argued that there’s a lesson for Canada in the current mess with China, namely that “trade with China comes with costs and risks that are different from doing business with countries where the rule of law is less malleable. The canola case is an opportunity to reassess our country’s priorities, including the trade relationship with China.”

And there were some other thoughts:

• Barrie McKenna argued in the Globe and Mail that it’s important to remember that not everything in the dispute is political – for example, China would be importing much less canola this year anyways, because African Swine Fever means that it needs less canola for pig feed.

• Charles Burton argued in the Ottawa Citizen that what is happening is not simply a dispute between Canada and China, but is “the early steps of a [Chinese] geo-strategic campaign to eradicate the rules-based international order.”

• I spoke on CTV News and Global News about why China’s suspension of pork exports from two Canadian plants is so symbolically important. China is in the grips of African Swine Fever, and its imports of pork are expected to double this year, but China cutting of Canadian supply of pork is really China saying “we will cut off our nose to spite our face.” (A quote I managed to fit into both interviews)

• Trade & Investment Director Carlo Dade was on Alberta Prime Time talking about trade in general and China in particular.

• It looks like the U.S.-China trade war is back on, with both sides levying more tariffs.

• Huawei has launched a major public relations/lobbying campaign in Canada in an attempt to avoid being banned from building Canada’s 5G network and to help with Huawei CFO Meng Wanzhou’s legal efforts. People they have brought on board their campaign include those who have worked for Conservative and Liberal governments, and a wide array of businesspeople.