IN THIS EDITION: Hong Kong protests, theorizing on Canada’s China strategy, and the Foreign Affairs Minister finally meets with her Chinese counterpart.

“China’s actions come from a well-worn playbook, but one that Canada is unfamiliar with.”

– Richard Shimooka, writing in The Diplomat

• After 10 weeks of protests in Hong Kong (which started over an extradition bill), protestors occupied Hong Kong International Airport on Monday, August 12 (and are still there as of this writing), causing hundreds of canceled flights. The situation is volatile. China has had some vitriolic comments (the Chinese government characterized the protests as “Something approaching ‘terrorism’ that posed an ‘existential threat’ to local citizenry”) which has led to global tensions about where this could lead.

Frank Ching in the Globe and Mail discusses how China has been blaming the unrest in Hong Kong on “foreign forces,” including recently openly saying that these forces are Americans.

Andrew Coyne in the National Post argues that western government have been largely quiet in their defence of Hong Kong, and that needs to change. He also notes that 300,000 Canadians live in Hong Kong.

Terry Glavin writes in Maclean’s that the federal government “has failed to uphold the global values it so loudly claims to cherish.”

An editorial in Postmedia papers argued that Canada’s response to the situation in Hong Kong has been “troublingly muted.”

The general sentiment is that Canada is not doing enough, or being firm enough, with China.

• Jack Mintz writes in the National Post that the Canadian government has done little to retaliate against China, possibly due to fear of losing more trade. He argues this is a mistake, and that even a small move like no longer funding the China-led Asia Infrastructure Investment Bank, should take place. (It’s important to note that Andrew Scheer is a champion of this idea)Anthony Furey argues in the Sun newspapers that one of Canada’s biggest challenges in responding to China is that “There doesn’t seem to be any unifying principles, any actual goals or desired outcomes.”

• Richard Shimooka writes in The Diplomat (an Asia-Pacific international affairs magazine) that Canada needs to “get serious” about the dispute with China, and that “Ottawa’s response to Beijing should be measured, consistent, and firm. On the last point, the government’s approach has been lacking thus far.”

• Patricia Adams writes in the Financial Post that Canada needs to “disentangle” itself from China. He argues that the U.S. and China are on the brink of a cold war, and Canada needs to pick its side.

• Patrick Groeneveld-Meijer writes for CBC that “Canada’s response to Chinese actions has been lacklustre at best, and cowardly at worse. Canada needs to take a stand… Canada must be a leader and work with its international partners in pressing China on its human rights record and international muscle-flexing.”

On the upcoming Canadian federal election:

• This piece highlights concerns about pressures from China in the lead up to the election. Goldy Hyder (CEO of the Business Council of Canada) says, “Whatever it is that’s been happening (behind the scenes), it hasn’t worked. And as the election draws near, there’s a greater risk that we’re going to be squeezed even harder and I don’t know what our response is going to be.”

• This Postmedia editorial argues that the Canadian public must force politicians to discuss what’s going on with China before the election because “The government would prefer not to have this conversation.”

On trade (and the trade war):

• This article looks at how the U.S.-China trade war could hurt Canada – primarily through dampening commodity prices and limiting Canadian capital investments.

• This piece also looks at how the trade war could hurt Canada, and outlines three scenarios, from “mild” to “scorched earth.”

• This article takes a close look at how oil prices could be affected by the trade war, predicting a price fall to US$40/barrel.

On the trade war:

• A look at why a U.S.-China trade deal seems to be far off now, when it once looked to be close.

• As the tension with China drags on, farmers continue to feel the heat – soy farmers, canola farmers, pork farmers and beef farmers have all seen negative impacts.

• China says that it has African Swine Fever under control and it is ready to rebuild its swine production; however, analysts question whether this is really the case.

By the end of April, China said it had culled over 1 million pigs. This number is “oddly low” – Rabobank (a Dutch bank) predicted it to be closer to 150 million.

• China is removing soybean oil, rapeseed (canola) oil, and palm oil from its import tariff quota management, meaning they will not be subjected to restrictions like other agriculture products on the list ( wheat, corn and rice). This news came out right after Chinese companies stopped buying American agriculture goods.

• According to this article about Tyson Foods, China is still working its way through its frozen meat supplies in its pork reserve, but could start to have a shortfall as early as October. 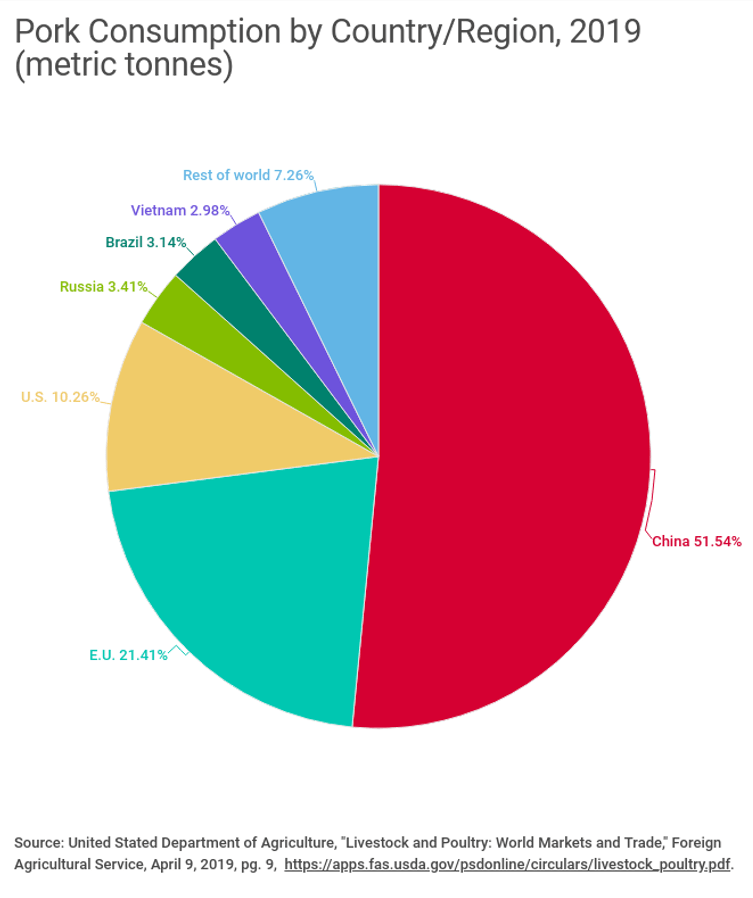 • China is expected to name Cong Peiwu as its next ambassador to Canada. Until recently, he was director-general of the Department of North American and Oceanian Affairs in China’s Foreign Ministry and worked in the early 2000s at the Canadian Embassy.

• Foreign Affairs Minister Chrystia Freeland met with her Chinese counterpart face-to-face for the first time since relations with China soured.

Freeland also met with her British counterpart, Dominic Raab, and said that they share views and concerns on Canadians detained in China.

• Bio-warfare experts are questioning why Canada’s National Microbiology Laboratory shipped samples of Ebola and the henipavirus family to China, which is suspected of running a secret biological warfare program. Shipping samples is a fairly standard practice in public health research, but one particular shipment to China from the Winnipeg lab is subject to an RCMP investigation and was the impetus for dismissing a lead scientist at the facility.

• This piece looks at the many problems facing China’s leader, Xi Jinping – such as decreasing levels of foreign direct investment in China, growing costs with the Belt and Road Initiative, and problems with Hong Kong.

• The Canadian government is being urged to monitor its diplomats in China for Havana Syndrome, after some American diplomats suffer from symptoms associated with the Syndrome.

• There have been reports of a Canadian and a Chinese journalist both having visa problems when trying to go to the other country.

• Finally, as noted in the Asia Pacific Foundation’s Asia Watch, China’s carbon emissions are projected to peak earlier than 2030 (when it was expected).