IN THIS EDITION: Canada’s new ambassador to China, Canada’s meat industry asks for assistance, and the story behind rising wheat exports to China.

Dominic Barton, former global managing partner of consulting firm McKinsey & Company and advisor to the Trudeau government, has been appointed Canada’s new ambassador to China. Barton spent five years in Shanghai as the chairman of McKinsey in Asia. Canada has not had an ambassador to China since the former ambassador, John McCallum, was fired by the federal government for publicly commenting on the Meng Wanzhou extradition case. Barton’s appointment comes as China appoints Cong Peiwu as its ambassador to Canada, who has experience both working at the Chinese Embassy in Canada and as the Director-General of the Department of North American and Oceanian Affairs in China’s Foreign Ministry.

Some commentary on the appointment:

• Jonathan Manthorpe in the Globe and Mail writes that, rather than a traditional ambassador, Barton needs to be a hostage negotiator, because his priority should be getting China to release Michael Kovrig and Michael Spavor from prison.

• Campbell Clark in the Globe and Mail argues that Barton’s appointment demonstrates that the federal government wants to reengage with the Chinese government.

• Shaun Haney writes in Real Agriculture that Barton is an ideal ambassador to China for the agriculture industry.

• Mehmet Tohti argues in the Globe and Mail that Barton’s appointment has concerned the Uyghur community, arguing that “given Mr. Barton’s former company’s [McKinsey’s] close engagement with businesses owned by the state that has oppressed our people, Uyghurs have every reason to be nervous about his appointment.”

• The Editorial Board of the Star questions whether Barton is the right fit for the job, arguing he would have been ideal in 2017, but is perhaps less so now.

• Here is a deep dive piece from the Financial Post on the issue, arguing that Barton “is as knowledgeable and connected as anyone when it comes to understanding China’s emergence as an economic powerhouse,” but note that the job entails much more than that.

• There’s an interesting piece in the Canadian Press from 2016 on Dominic Barton’s views on China. While now fairly dated, it does give some interesting insights.

Canada has asked for a WTO meeting with China over canola

Canada has formally asked for a meeting with China before the World Trade Organization (WTO) to resolve the Chinese ban on Canadian canola seed shipments.

This is an interesting piece exploring why farmers are still growing canola, even with the current difficulties with China, saying that “it is impossible for multi-generational farming operations to treat the challenge issued by China in isolation of the rich, nuanced agrarian history of which canola is a part.”

Canadian meat processors and packers are saying that the economic impact of the ban on Canadian beef and pork to China is almost at $100 million. The Canadian Meat Council is asking the federal government for financial assistance.

This piece explores how Canadian meat packers and processors are feeling the financial burden from this more than Canadian meat farmers, and this piece, from a few months ago, explores how the RCMP were asked to investigate a falsified meat export certificate that started off this ban.

On the balance: canola sales to China down – but wheat is up

While crop exports to China from Canada have largely taken a hit, wheat exports to China have soared. According to the USDA’s latest Canada Grain and Feed Bulletin, Canada’s share of total Chinese imports of wheat has risen above 60 per cent, whereas last year it was 32 per cent. This is largely a result of falling American (because of the trade war) and Australian (because of a major drought) exports. 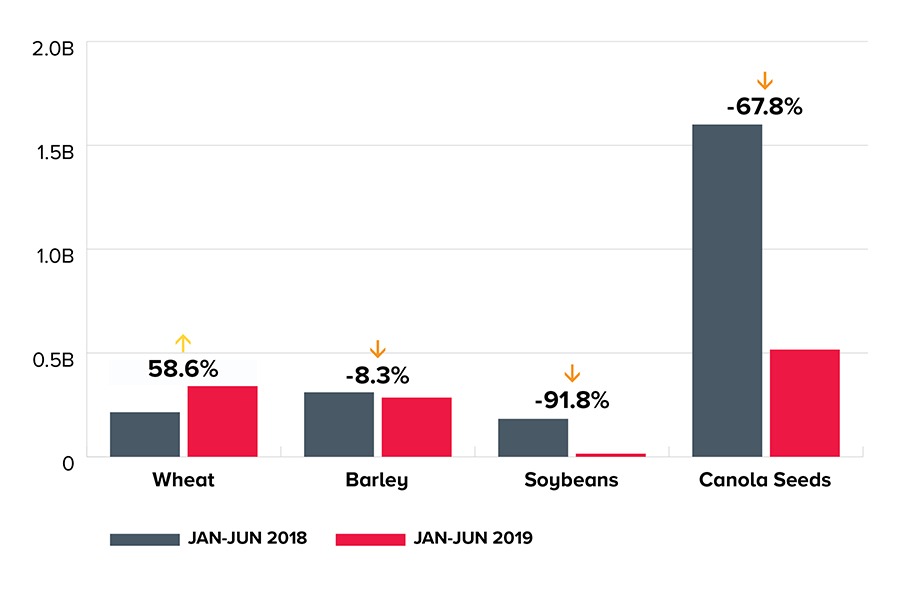 • The Bank of Canada is “alarmed” at the impact that the U.S.-China trade war on the Canadian economy, estimating it to have taken a 0.4 per cent dent out of Canada’s GDP.

• Terry Glavin in the National Post argues that China is allowed to “bully” Chinese-Canadian citizens too much.

• The Chinese government and Prime Minister Trudeau exchanged words: a Chinese government spokesperson said Canada needed to reflect on its “mistakes,” and release Huawei CFO Meng Wanzhou. Trudeau fired back by saying that China uses arbitrary detentions “as a tool to achieve its international and domestic political goals.”

• While European and American companies have left the Alberta oil patch in droves in the last few years, Chinese state-owned oil companies have stayed put. Analysts say that these massive companies can afford to stay in the oil patch even if they don’t make a lot of revenue.

• The tensions with China have hit many parts of the Canadian economy and life – a Saskatchewan academic’s book series, which was due to be sold in China and was nearly through being translated, was cancelled because the Chinese publisher “did not want to be seen collaborating with a Canadian.”

• This article explores how Canadian universities and colleges have a challenging time navigating current collaborations with China.

• One unexpected boon for Canada from the U.S.-China trade war: a soaring Canadian lobster industry.