Before diving into all the good stuff we have for you in the Brief today, I wanted to introduce a new, and brilliant, China Brief author: Stephany Laverty, fellow policy analyst at the Canada West Foundation. I will be stepping back from writing the Brief, but I leave you in excellent hands.

Also, while I have your attention, a quick reminder of what the Brief is, and why we do it: It’s a compilation of stories and links related to China and its relationship with Canada’s West specifically, and Canada more broadly. When there are complicated, large issues that last months (we’ve seen our share of those recently!) we do our best to keep everyone familiar with the whole story, not just what’s happened in the last day or two. The Brief is part of an internal learning and education process at CWF that we share with you.

Finally, like the Canada West Foundation, our Brief is non-partisan and balanced – we pass on what we see that we find interesting, relevant (and occasionally humorous). If you see a story or link you think we’ve missed, please send it along!

Sharing this Brief for you for the last two years has been my absolute pleasure.

The deal may also demonstrate China’s potential willingness to remove non-tariff barriers, those regulatory or policy measures to restrict or impede imports into a country and protect domestic supply. For example, the deal allows most U.S. beef products into the country for the first time since 2003. However, it remains to be seen if this reduction of non-tariff barriers will continue with trade agreements for other countries, such as Canada, and is something to monitor.

Slumping manufacturing is another reason stocks slid in Canada. Some are beginning to look at ways to increase domestic manufacturing and reduce reliance on Chinese imports, as we have seen with the ramping up of domestic personal protective equipment (PPE) production in the country. Historically, Chinese manufactured goods have been cheaper to import than for Canada to produce those goods domestically. However, companies may be willing to pay a higher price for domestic production as the pandemic and U.S.-China trade tensions have highlighted the risk of relying on these countries for key goods. However, Canada has some key considerations around labour, climate, resource availability, and domestic supply chain considerations that make such a pursuit fairly complicated.

In terms of PPE, Canada does not rely solely on China. In 2018, StatsCan reported the following: 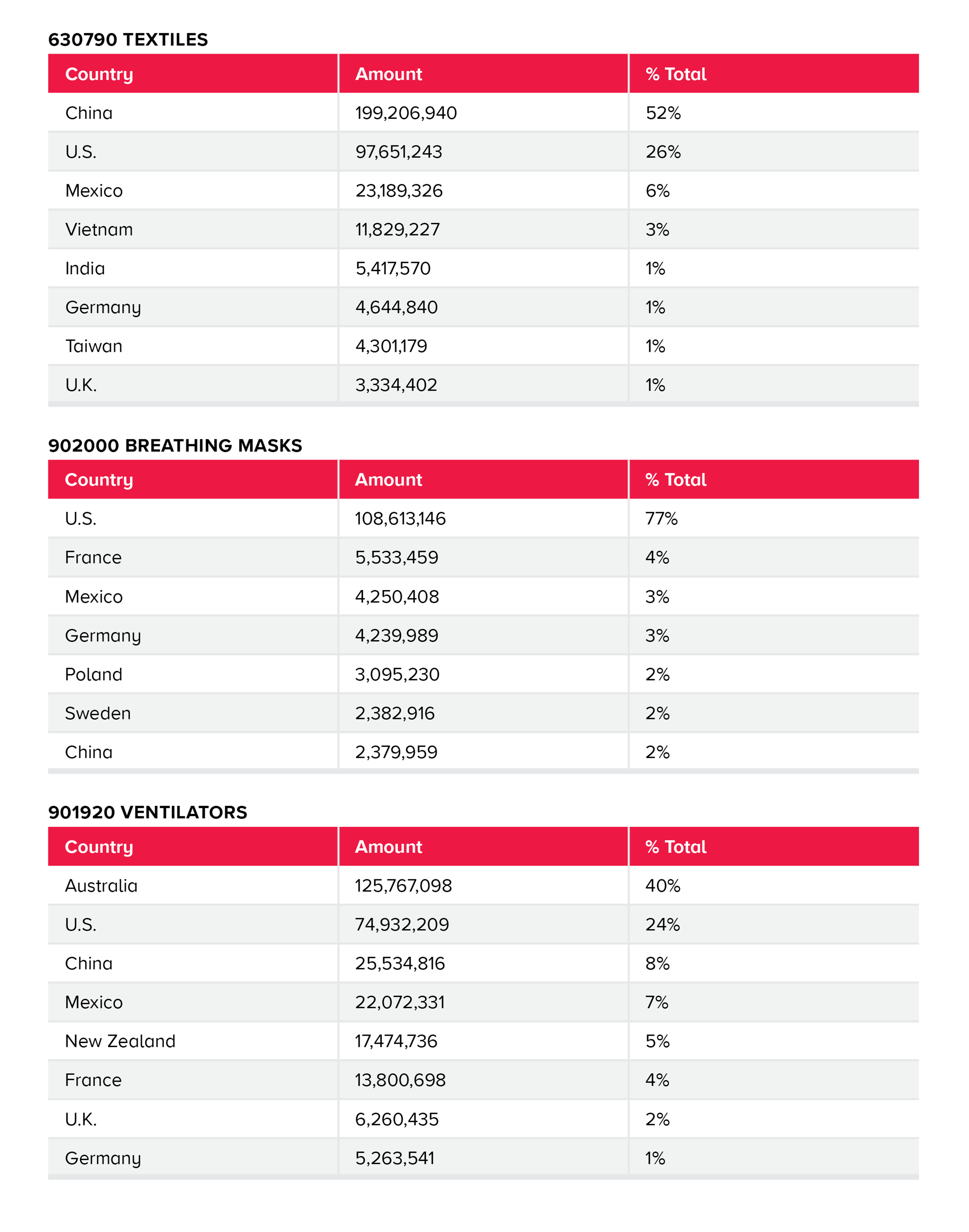 Japan has begun to take measures to lessen dependence on Chinese manufacturing and the U.S. has been more vocal in pursuing increased domestic production.

One Chinese company, China National Oil Offshore Oil Corporation (CNOOC), is also withdrawing investment in shale oil production. The company has announced plans to cut spending by 11% this year to 75-85 billion yuan with most of those cuts coming to Canadian oil sands and U.S. shale spending and production. CNOOC runs the Long Lake facility in the Canadian oil sands, which produces 72,000 barrels of bitumen a day.

As tensions between the U.S. and China heat up over COVID-19, China’s Ambassador to Canada has praised Canada for working with the country to respond to the crisis in the face of American finger-pointing. In agreement with Canada’s Foreign Affairs Minister François-Philippe Champagne, the ambassador said that the time for looking into the crisis will be once the pandemic is resolved. The ambassador also acknowledged that China is looking into reports of one million faulty masks from China as PPE concerns still continue; Canadian federal officials  have confirmed China will replace the masks at no cost to Canadians.

However, Canada and China disagree that there are restrictions on flight wait times at Chinese airports which may have contributed to at least two cargo flights returning to Canada without PPE supplies.

Champagne also recently expressed Canada’s concern over the arrest of fifteen activists in Hong Kong. The Chinese embassy issued a statement demanding that Canada cease interfering in Chinese internal affairs. Alberta Premier Jason Kenney tweeted a message of support for one of those detained, Martin Lee, founder of the Hong Kong Democratic Party. The Chinese Consulate in Calgary responded and urged Canadian politicians to not engage in internal Chinese affairs and to respect Hong Kong law enforcement actions.

• Cushing and Wakefield have published a survey of Chinese investors, conducted at the start of the COVID-19 outbreak in China, and their intentions for overseas investment in 2020. The survey found that Mainland Chinese real-estate investors overseas (MCREIOs) said they would maintain (about 5%), cease (just over 5%), or enter into new investment (roughly 2%) in Canada.

• New figures from provincial health authorities show that most early COVID-19 cases in Canada came from American-related travel and not China.

• Concerns are emerging that in the early days of the COVID-19 outbreak in China, Chinese officials took steps to stockpile N95 masks from other countries, including Canada.