THIRD IN A SERIES ON WESTERN CANADIAN TRADE

Western Canada’s trade with the Asia-Pacific region has increased nearly 25 per cent during the last five years.

It’s no surprise that China, the most populous country on the planet, dominates the focus of trade with Asia. Yet, it is Southeast Asia that is one of the fastest growing markets in the world – and also one of the least known.

The Association of Southeast Asian Nations (better known as ASEAN) is a regional economic community of 10 member nations: Indonesia, Thailand, Singapore, the Philippines, Malaysia, Vietnam, Myanmar, Brunei, Laos and Cambodia. Formed in the late 1960s, its primary goal today is to promote economic growth and regional stability among members. 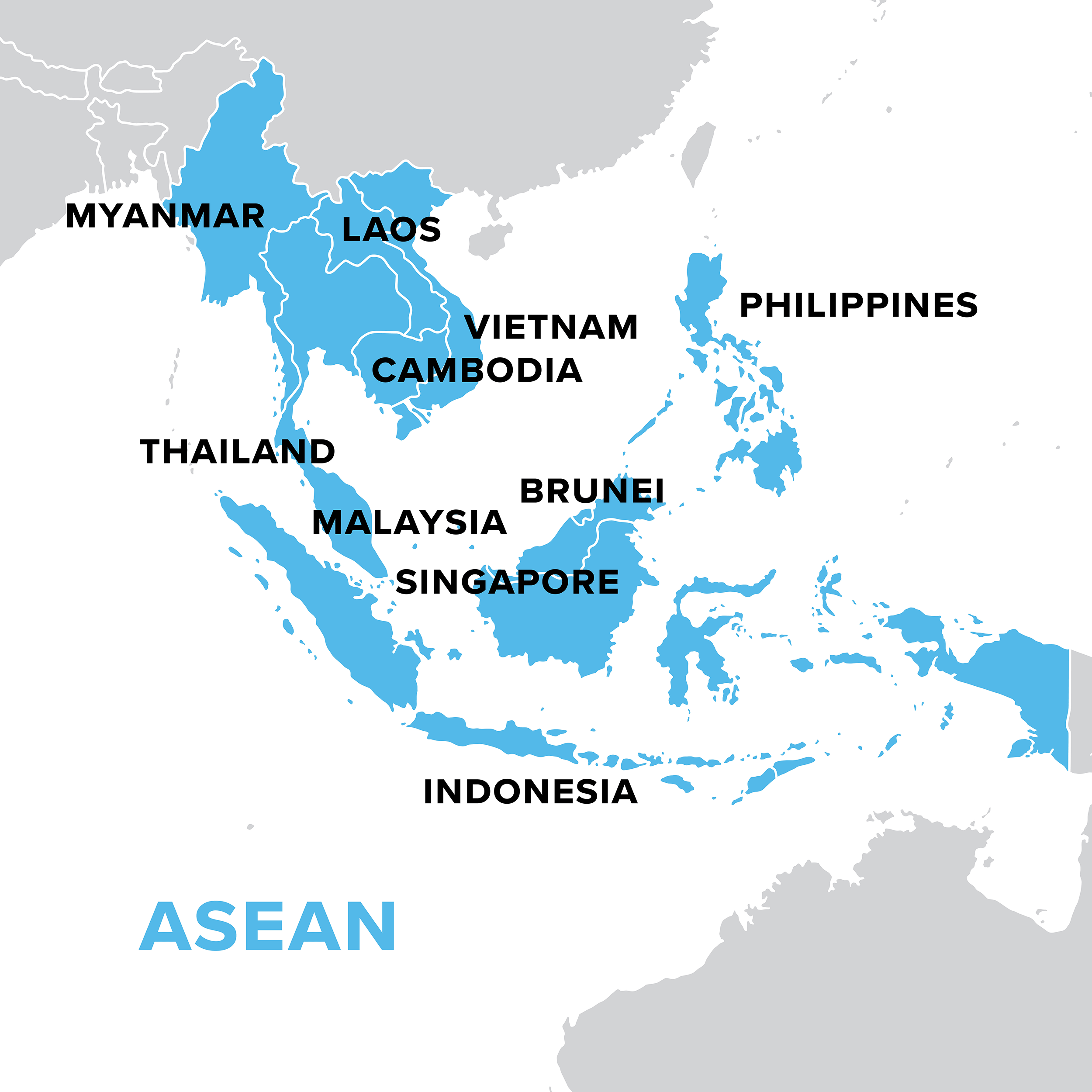 In 2015, member countries launched the ASEAN Economic Community (AEC) to promote ASEAN as a single market and production base, and ease the movement of goods, services, people and investment throughout the region. Measures include eliminating tariffs and non-tariff barriers to international trade, coordinating rules of origin for customs purposes, removing restrictions on trade in services and enhancing protection on investments in ASEAN countries.

ASEAN is a sizeable market. Its GDP of $2.4 trillion US is similar to that of France, the world’s sixth largest economy. Last year, ASEAN’s average GDP growth rate was more than five per cent. While most ASEAN members’ GDP per capita ranges from $1,200 – $10,500 US, Singapore’s ($52,888 in 2015) is higher than Canada’s and nearly on par with the United States.

If ASEAN were a single country, it would have the world’s third largest population. With about 620 million people, it has nearly twice as many residents as the U.S. Yet, ASEAN is not a homogeneous customer. The populations of the individual countries are diverse in terms of income, language, culture and religion.

The ASEAN region is rich in natural resources, such as oil and gas, rubber, minerals and forestry.

As one of the world’s fastest growing consumer markets, ASEAN is an important Asian market to build western Canada’s trading relationship with. ASEAN’s largest trading partners are China, Japan and the European Union. As a bloc, ASEAN has signed several trade agreements with the major markets of China, India and Japan, as well as South Korea.

Western Canada is responsible for more than half of Canada’s total exports to ASEAN (52 per cent in 2015). Last year, western Canada contributed four per cent of ASEAN’s total imports.

B.C. is the only western province that is not a net exporter to ASEAN. Saskatchewan is the largest exporter. Indonesia, ASEAN’s largest economy, is in the top 10 export destinations for the three prairie provinces. Since B.C. conducts the most trade with ASEAN, western Canada as a whole is net importer from ASEAN. 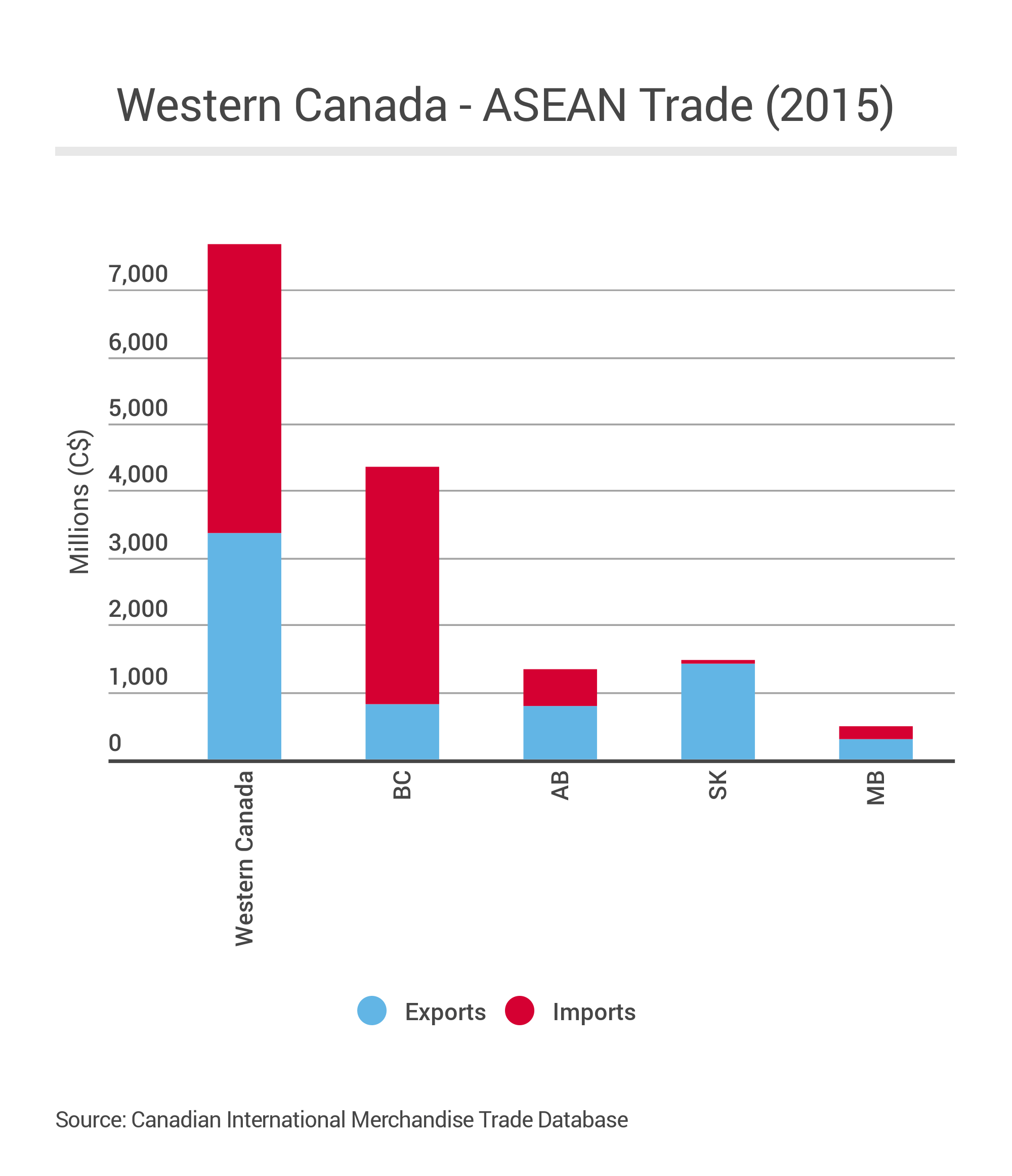 In 2015, western Canada’s top three exports to ASEAN were:

The number of ASEAN households with enough income to make purchases beyond basic necessities is expected to nearly double over the next decade. As incomes rise, consumption increases and changes. Universally, people want to improve their diets, consuming more red meet, seafood and vegetables – major products western Canada produces. Rising beef demand in Vietnam presents a great opportunity for western Canadian beef exporters. New Zealand and Australia are competitors in this region, supplying more than 80 per cent of ASEAN’s imports of live meat and oats.

Several ASEAN countries – particularly, Indonesia, Thailand, Vietnam and the Philippines – have an increasing demand for softwood lumber, as their furniture and packaging sectors grow. With Canada facing U.S. tariffs on softwood lumber this fall, expanding market diversification will be even more critical for the western forest sector. Canada holds a majority market share in the Philippines, but the largest trade barrier in the other markets is a lack of knowledge about Canadian wood products. Canada’s biggest competitors in the region are New Zealand and Chile.

While ASEAN ranks lower that NAFTA, the EU and the Pacific Alliance on all competitiveness indicators, some individual members are doing very well. For example, Singapore ranks first in the world for ease of doing business as well as enabling trade. Canadian companies in Singapore include Talisman, SunLife, Blackberry and Manulife. Singapore was ranked second in the world on the Wall Street Journal/Heritage Foundation’s index of economic freedom.

On the other end of the spectrum, Laos is in the category of repressed countries. Singapore is also second on the global competitiveness index, where half the ASEAN members rank in the top 50 (Singapore, Malaysia, Thailand, Indonesia and the Philippines). 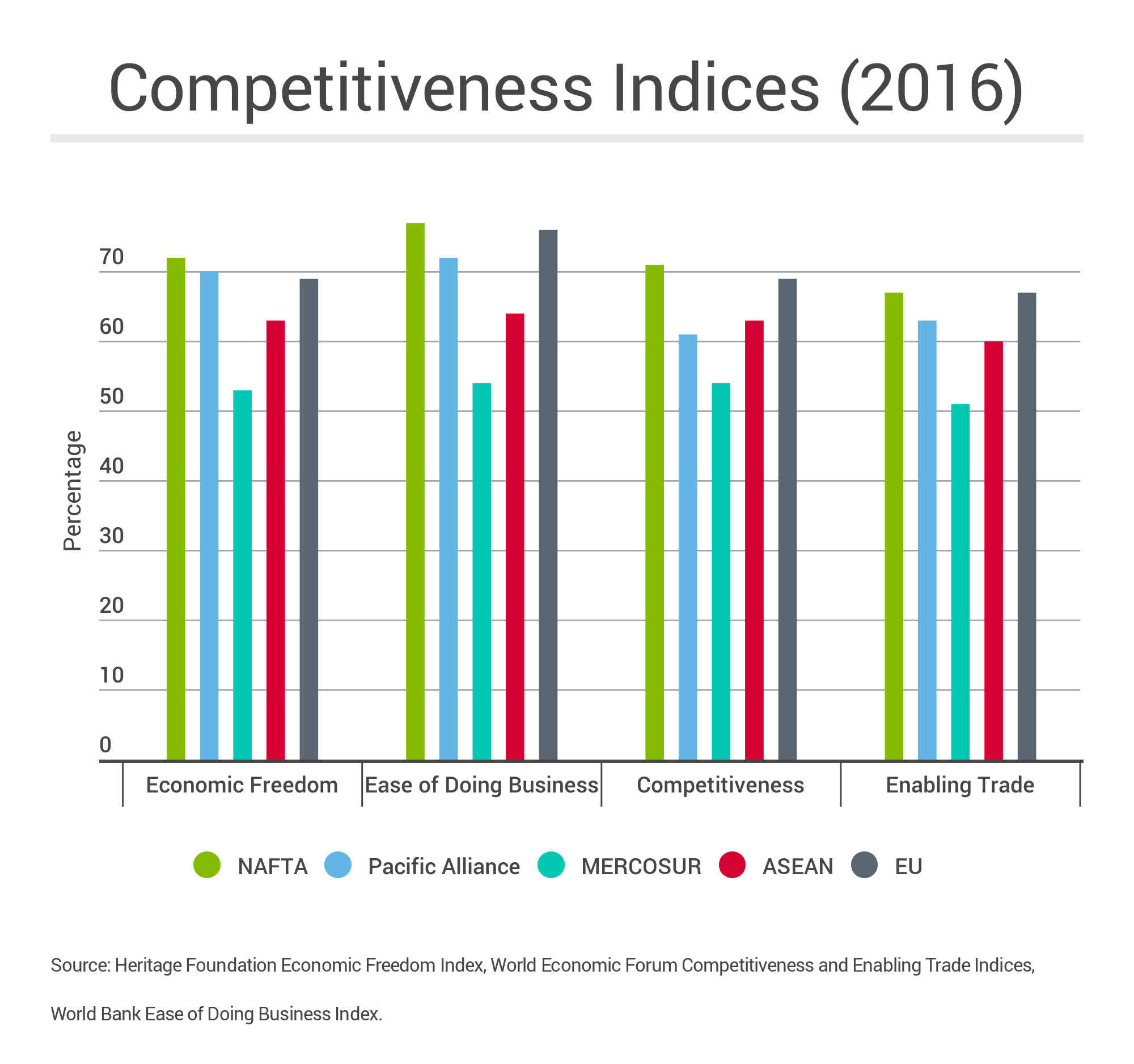 The Canada-ASEAN Joint Declaration on Trade and Investment implementation plan focuses on small and medium-sized enterprises, connectivity, education, innovation and corporate social responsibility. The Alberta government’s trade office in Singapore was established to be an entry point for exports into Southeast Asia.

If the Trans-Pacific Partnership trade deal – which includes several ASEAN members – fails to be ratified, Canada will need other trading alliances in the Asia Pacific. As western Canada looks to Asia for new markets, ASEAN is an attractive economic region to build stronger trade links with.

This is the third of a four-part series on western Canada’s trading relationship with global trade blocs. You can find out about the West’s trade with the Pacific Alliance here, and with our NAFTA partners here. Watch for the final report on the South American Common Market (MERCOSUR).

– Naomi Christensen is a policy analyst at the Canada West Foundation.