By Carlo Dade
Director, Centre for Trade and Investment

Transcript of prepared testimony from January 29, 2021 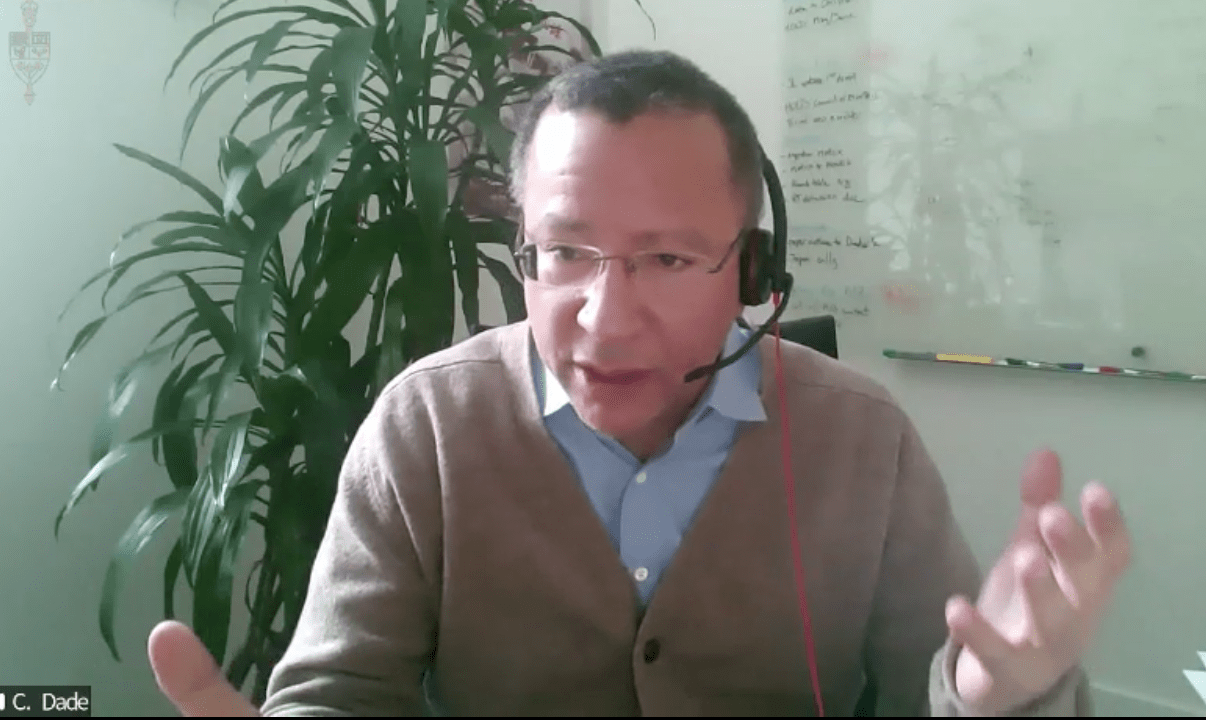 That, pursuant to Standing Order 108(2), the committee undertake a study on the government’s COVID-19 recovery plan for Canadian exporters; that this study include an examination of changes to how international trade will be conducted in a world impacted by COVID-19, of what the Trade Commissioner Service is doing to prepare for these changes and help Canadian businesses navigate them, and of which agreements would be in Canada’s best interests to pursue at the present time; that the Minister of Small Business, Export Promotion and International Trade be invited to appear; that the Chief Trade Commissioner be invited to appear; that briefs submitted to the committee be no longer that 2,000 words; and that the Committee report back to the House.

Testimony will focus on the second, third and fourth parts of the query – changes to how international trade will be conducted, what the Trade Commissioner Service (TCS) is doing to prepare, and which (new) agreements should Canada pursue.

Changes to how trade will be conducted

The most important issue, and a long-standing one, for Canada is with the fundamental element of how trade has been and will be conducted – the movement of goods, people, money and ideas to and from markets. Here Canada faces severe challenges that are not being addressed. In a policy brief published in October 2019, Building a Bridge to Trade Opportunities: A long-term approach to trade infrastructure planning we looked into the decline in Canada’s rankings in the World Economic Forum’s perception index rankings of competitiveness and reliability of trade infrastructure, falling from being perceived by international customers as having the 10th best trade infrastructure as in 2008-09 down to 32nd today. On the one hand, our customers are telling us that we have a problem. On the other hand, they are not seeing signs that we are aware that we have a problem. While competitors like Australia and the U.K. have developed comprehensive plans and transparent mechanisms to prioritize and coordinate projects into long-term pipelines, Canada  still has not indicated whether we will  recapitalize  our only trade-specific national infrastructure program, the National Trade Corridor Fund (NTCF). Despite supporting the infrastructure that facilitates 67 per cent of Canada’s GDP,  the NTCF’s relatively modest $2 billion share of the Government’s $188 billion infrastructure budget is now virtually depleted. CWF in partnership with the Business

Council of Canada, the Canadian Chamber of Commerce, Canadian Construction Association, Western Roadbuilders, and others have joined forces to develop concrete policy steps for Canada to close the gaps with its competitors. Devoting serious attention to the trade infrastructure challenge is fundamental for Canada. Having market access is useless if you cannot get goods to markets, or worse, customers do not believe you will be able to get goods to market. As opposed to many other trade challenges, this one is fully under our control to solve. This is a major concern for Western Canada. Solving it would be a win for the entire country. Fortunately, policy work on trade infrastructure is a mixed bag. While follow-through on the Canada Transportation Act Review was disappointing and the government has not yet announced recapitalization of the National Trade Corridor fund, Canada together with Provincial and Territorial governments have made a public commitment via the Council of Ministers of Transportation to improve the competitiveness of our trade corridors as a national priority. Currently co-chaired by Alberta Minister of Transport Ric McIver, the Council of Ministers has dedicated resources to the issue under the auspices of the Pan-Canadian Competitive Trade Corridor Initiative. Industry and the think tank community are also deeply involved including a coalition of organizations including CWF, the Business Council of Canada, the Canadian Chamber of Commerce, Canadian Construction Association and Western Roadbuilders and Heavy Construction association, Canpotex and others are using seven plus years of CWF research to o bring forward concrete policy proposals to improve policies and institutional structures to improve Canada’s trade infrastructure performance.

What the Trade Commissioner Service is doing to prepare

The Trade Commissioner Service (TCS) has taken prudent and necessary steps to meet the COVID challenge by moving more services online, transitioning to virtual trade missions and similar steps. However, there is a larger challenge. Overall, Canadian trade export services still tend to be analog in a digital world. The challenge was laid out in another CWF policy brief published in March 2020, Trade (Assistance) Diversification. Current mechanisms for providing export support services impose significant, especially in person, transaction costs that deter and thwart smaller exporters. Canada has a vast array of support services by region, sector and other attributes that make sense to insider trade practitioners but confuse and frustrate new users and the vast majority of small exporters who export only to the U.S. (and have never needed support services) but are thinking about other markets (where they need support services). An Alberta SME seeking assistance faces up to a dozen different and competing agencies, all of which can provide value – municipal agencies such as Calgary Economic Development; provincial agencies such as the Ministry of Economic Development and Trade, and if the business exports food products, the Ministry of Agriculture and Forestry. At the federal level there are another half dozen agencies. A food processor in Alberta that owns neither a tractor nor a chainsaw would be surprised to discover that there is help available in the Alberta Ministry of Agriculture and Forestry – not an intuitive guess. These upfront friction and transaction costs are disincentives that can stop an SME before it even considers taking advantage of new agreements to export. The policy brief shows how the U.S. International Trade agency has consolidated and brought U.S. export services online to reduce transaction costs for U.S. exporters as a model for what Canada could do. But resolving this issue in Canada will take cooperation from provinces and crown agencies, something that is beyond the pay grade of TCS.

On which agreements Canada should focus

Here the priority is simple and straight forward – focus first on increasing the use of existing benefits including expansion of the multi-party trans-pacific agreement, which the U.K. parliament has begun hearings on joining, and salvaging the World Trade Organization and second, on joining other multi-party agreements like the Regional Comprehensive Economic Partnership (RCEP). This means abandoning pursuit of old fashioned bi-lateral agreements such as an agreement with Indonesia. Multi-party agreements allow Canadian companies to build competitive supply and production chains. Bilateral agreements where rules apply only to Canada and the partner country do not. These agreements add to the already confusing array of rules, paperwork, tariff schedules and general confusion that has Canadian companies forgoing use of existing agreements. On the trade negotiation front, priority number one for Canada is to grow the CPTPP. Priority two is working on ascension to the RCEP. Additionally, finalizing an agreement with the U.K. given the size and importance of that market and the post-Brexit reality, would be one exception to the “no more bilateral agreements’ rule.

First, on the trade infrastructure file, Canada needs to plan now for post-COVID realities around the movement of people. Here the instructive analogy is the transition to the new normal post 9/11. The shock of the attacks made transparent the ongoing threat of terrorism and the need for responses. Initial reactions were fine tuned to adapt as the ongoing nature of the threat became clear. As CWF noted in a Policy Options piece in June 2020, with pandemics after learning and quickly forgetting lessons from SARS, it should be clear that this threat, like terrorism, will not simply disappear allowing us to get back to life as we knew it. In 2003, the world saw SARS, in 2009 we had H1N1, then 2014 Ebola and in 2018 it was MERS. Any one of these could have manifested differently and become the pandemic we now face. We need to think now while money and attention are available to start thinking through changes that will be needed. We can take appropriate lessons from the post-9/11 experience in doing so. The North American Strategy Competitiveness group is one regional entity looking at solutions.

Second, on dealing with China, Canada needs a made in Canada policy for engaging and cannot inadvertently default to adapting an American approach as our own. Where our interests align with the U.S., we cooperate. But where our interests diverge and we compete, we need to compete. This should now be clear in the aftermath of the U.S. China Phase One agreement, where the Americans essentially threw Canadian farmers under the tractor. During the NAFTA re-negotiation the Americans warned Canada, through insinuation and hollow threats, to not contemplate engaging China to protect our trade interests. Meanwhile, the Americans were negotiating their own agreement that positioned U.S. farmers to take market share from Canadians. The danger was not in the purchase agreements, which are temporary, but in what former U.S. Trade Representative Robert Lighthizer termed “structural changes to trade” that give U.S. exporters sustained advantage. On issues from security to human rights we have and can continue to cooperate with the Americans. But where our interest diverges, we need to put Canadian interests forward as we have done in the past. Forging an independent path with China while maintaining close security cooperation was a hallmark of the Diefenbaker government. While fighting the Cold War alongside the U.S., Canada was also able to put its foot down on the U.S. undercutting Canada in global grain markets by refusing to abide by a U.S. embargo on grain sales to China. In thinking through contemporary trade relations with a country that has become our second largest trade partner, lessons from the past should not be forgotten. CWF has completed one of the most extensive reviews of Canada’s agricultural trade with China, which includes a rare analysis of the impacts of the U.S.-China Phase one agreement on Canadian agriculture and lays the basis for new thinking on developing a new policy for engaging China based on convergence of Canadian and Chinese interests.

For the full written testimony and appendix, download the pdf