Globally we are trying to reduce GHG emissions. In Alberta and Saskatchewan, we are desperately trying to clean our electricity grids.

Yet, despite the fact that uranium deposits are abundant in Saskatchewan, no one is talking about nuclear power as a solution. In this blog series, we will give three reasons why nuclear should be part of the conversation: (1) it’s clean; (2) it’s cheap; and (3) the future is promising.

In this post, we look at (3) The future of nuclear energy is promising.

All operating nuclear power plants use fission, the splitting of atomic nuclei to release energy.

Along with this energy comes heat, neutrons, and radioactive fission products. Nuclear chain reactions create so many neutrons and release so much energy that the temperature has the potential to soar out of control and cause a meltdown – a major fear for those unfamiliar with the nuclear process.

There are many measures in place to prevent this from happening. In addition to circulating coolants, the temperature is also controlled by regulating the flow of neutrons created in the fission process.

To do this, control rods composed of neutron-absorbing materials are inserted into or around the fuel rods of conventional nuclear cores. The control rods absorb neutrons, controlling the fission and preventing the excess release of energy. These control rods can be inserted, removed and positioned as necessary to maximize the efficiency of the power plant.

The energy released from nuclear reactors is typically used to heat water into steam, with the steam then used to turn a turbine and produce electricity.

Though radiation is harmful, it is well-shielded by simple materials such as water. In fact, water is such a good radiation shield that if you were to swim just below the surface of an average pool with spent nuclear fuel rods at the bottom, you would likely be exposed to less radiation than if you were standing on the pool deck. This is because every 7cm of water cuts the amount of radiation in half. Staying at least a couple meters away from radioactive storage casks while underwater would be enough to avoid a lethal dose – swimming just under the surface would keep you shielded not only from the casks but also from everyday background radiation, making it possible that a lower level of radiation would actually be received than from standing out of the water.

Alternatively, nuclear waste can be recycled. Recycling nuclear waste to power reactors has been going on for some time now – about 17% of France’s electricity comes from recycled nuclear fuel, for example. However, spent fuel rods can only be recycled once before they are disused and set aside as nuclear waste. Much like certain plastic products – which can be recycled once but then degrade to a point where they have no further applicable purpose – it is better than nothing but far from a sustainable solution.

Through technology, more sustainable options are starting to develop that have the potential to transform the industry. Below are three of the major advancements that could usher in a new era of virtually waste-free nuclear energy.

These represent a technological step beyond conventional power reactors, and are poised to become mainstream. They employ more efficient use of uranium resources and also have the ability to “burn” plutonium, which is a product of spent uranium. FNRs and TWRs will not only create energy out of what would otherwise be nuclear waste, they will also deplete plutonium stockpiles – the key ingredient for nuclear weapons. There is no current long-term solution for storage of radioactive plutonium, a potential million-year hazard that could be even more dangerous if it fell into the wrong hands. But FNRs will solve the problem of where to put the plutonium by using it as a fuel source – essentially depleting it while providing cheap, doubly-clean electricity.

[Thorium’s drawback is that it would require all-new reactors – none of which are currently fully operational. It’s a completely different technology than the uranium fueled power all current nuclear employs] 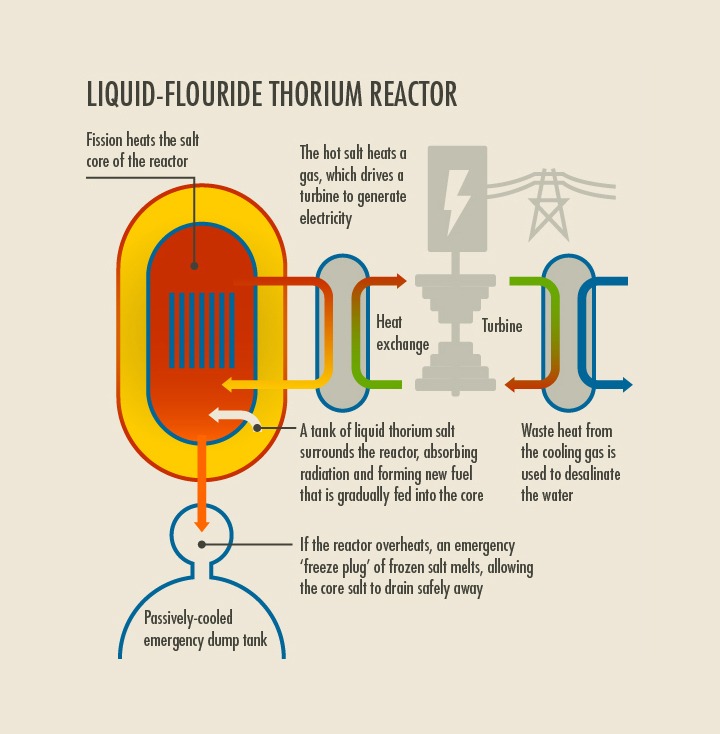 Using a molten-salt reactor design, thorium can be used more effectively and efficiently than any current nuclear material. Thorium – the element two spots lower on the periodic table than uranium – has the potential to become the planet’s most abundant stored energy resource if LFTRs are employed in large-scale operations. This would effectively make the actinoid metal a new “superfuel” – a virtually limitless, safe, emission-free fuel source that does not produce any significant amount of radioactive waste. A golf-ball sized sphere of thorium – worth only a few cents – will be enough to provide a lifetime of electricity for an average Canadian, according to Flibe Energy (a company that derives its name from a combination of lithium fluoride and beryllium fluoride [LiF-BeF2] salts often called “F-Li-Be”).

While FNRs, TWRs, and LFTRs will make nuclear energy safer, cleaner, and more efficient than it already is, fusion will be the ultimate game changer. Conventional nuclear power, including the new technologies just mentioned, all rely on splitting atomic nuclei to generate energy; fusion relies on fusing two nuclei together. This is significant because fission requires heavy elements with many protons, such as thorium and uranium, in order to generate the chain reaction necessary for sustained energy release. This results, to differing degrees, in radioactive waste and plutonium production. Although the amount of hazardous material created as a by-product of fission is relatively small, there are still safety and security concerns if not managed properly, which some consider a cause for worry regardless of how well it is done. Fusion negates all of that.

Fusion takes isotopes from the lightest and most abundant element in the universe – hydrogen – and fuses nuclei to release energy. This is significant because it utilizes a stable and readily available resource without creating any traditional nuclear waste. Fusion does not create radioactive fission products because heavy nuclei are not split. Instead, as light nuclei are fused together, comparatively more energy is created with less by-products. The main by-product is helium, an inert noble gas that just so happens to be the second most abundant element in the universe. In a sense, all the energy we use on Earth stems from fusion. Hydrogen – and progressively heavier elements – are constantly undergoing fusion within the sun and generating the ultimate baseload power for all life in the planet.  There is one catch with harnessing the direct energy of nuclear fusion in a reactor: We do not yet know exactly how to do it. 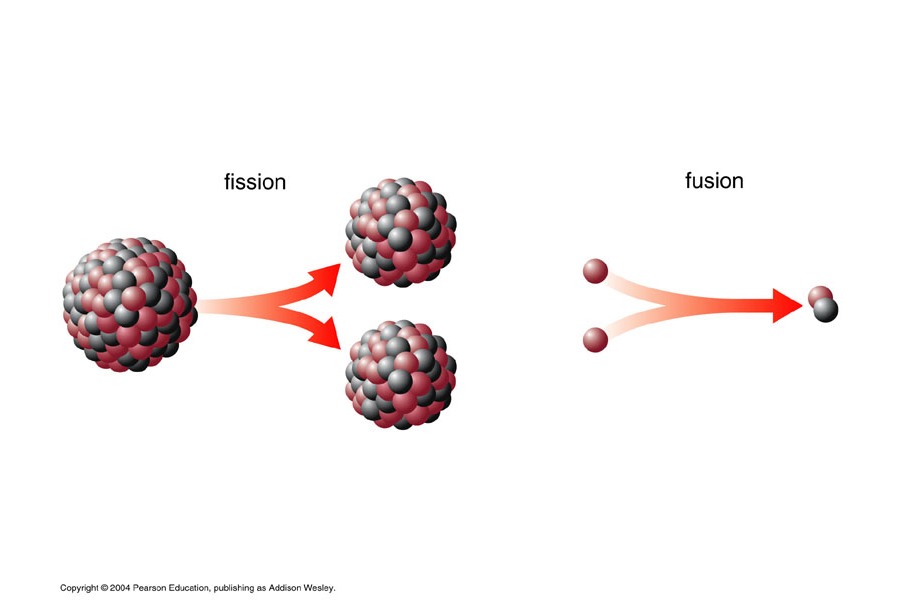 Fusion has been achieved in many laboratories around the world, but nobody yet has been able to produce a lasting chain reaction. The current results are promising but the energy input to create these conditions is still greater than the energy output from the fusion process. Once a stable reaction can become self-sustaining, a virtually inexhaustible, safe source of energy – with small fuel requirements – will become a reality. Research is being carried out in Canada at the University of Alberta and the University of Saskatchewan, among several other institutions, making it possible that the long-awaited breakthrough could come from one of the very places that need cleaner energy to replace coal power.

But whether it is fusion, FNRs, TWRs, thorium, or conventional nuclear driven electricity, one thing is certain: This diverse form of large-scale energy needs to be considered for Canada’s energy future – especially if electrification of end use energy services is rolled out nationwide. There may be no better solution for meeting increasing clean energy demand than that which is released from subatomic particles in massive reactors.

Read part two: The future of nuclear energy is promising

– Jordan Flagel is a policy analyst at the Canada West Foundation