In Western Canada and around the world, the energy sector is rapidly transforming to one that promises to be cleaner, greener and more efficient. Each month, the Canada West Foundation’s Energy Innovation Brief brings you stories about technology innovations happening across the industry – in oil and gas, renewables, energy storage and transmission. If you have an idea for a story, email us at: .

IF YOU WOULD LIKE TO RECEIVE THE ENERGY INNOVATION BRIEF IN YOUR INBOX,
PLEASE MAKE SURE YOU SIGN UP HERE

In this month’s roundup of energy innovation news:

In January, Alberta Innovates launched its Bitumen Beyond Combustion initiative – a set of contests aimed at identifying new and non-combustible products that could be produced from Alberta’s oil sands. Part of the initiative includes the Carbon Fibre Grand Challenge: a $15 million contest to develop and commercialize techniques to produce carbon fibre from bitumen. Because carbon fibre can be made from the asphaltenes naturally found in bitumen, it was identified as the nearest term, highest value and largest-scale opportunity for the oil sands to pursue. This is partly because it would allow producers to avoid some of the usual problems associated with bitumen products, such as pipelines and GHG emissions, while making a high-value product. The challenge is currently accepting applicants and will be running through to 2024. Read the full story here.

Part of the challenge for Alberta bitumen producers will be to produce carbon fibre at much lower costs than is being done today. Because carbon fibre currently fetches about 10x the price of steel, it is rarely used outside of niche sectors, such as race cars, aerospace and defense. But if it can be done (and Alberta Innovates thinks that it can), it could unlock tremendous added value for the oil sands. Yet, this raises the question: if it is such a great opportunity, why hasn’t it been tried and done before? Perhaps the right technology hasn’t been there until now, or perhaps the cost of pursuing it has been too prohibitive in the past (hence the lofty prize). Either way, it will be interesting to see what innovations evolve from this opportunity.

PetroCanada has rolled out the red carpet for Canada’s first nationwide electric highway. Spanning the TransCanada highway from Victoria, B.C. to Stewiacke, Nova Scotia, it consists of 50 electric vehicle (EV) charging stations. Each station is equipped with two DC fast chargers that can charge up to about 80 per cent of a typical EV battery (a 200-kilowatt charge) in just 30 minutes, where drivers are charged by time rather than energy at $0.33/minute. That works out to less than $10 for a 30-minute charge. The station’s two universal connectors are also compatible with a wide range of American and European EV models, such as Tesla, Ford and Mitsubishi, for example. Read the full story here.

In Canada, EVs are quickly increasing in popularity. There are currently over 100,000 EVs on the road in Canada, and as of 2019, EV sales represented 3.5 per cent of all passenger vehicle sales in Canada (and as high as 10 per cent in B.C.), representing 25 per cent growth from just a year prior. Part of the reason for this increase is that EVs are becoming increasingly affordable, and partly because EV manufacturers are continuing to improve the range and battery life of their vehicles. But availability of charging infrastructure is another major factor that will increase the feasibility of driving an EV. Cross-country electric road trip, anyone? 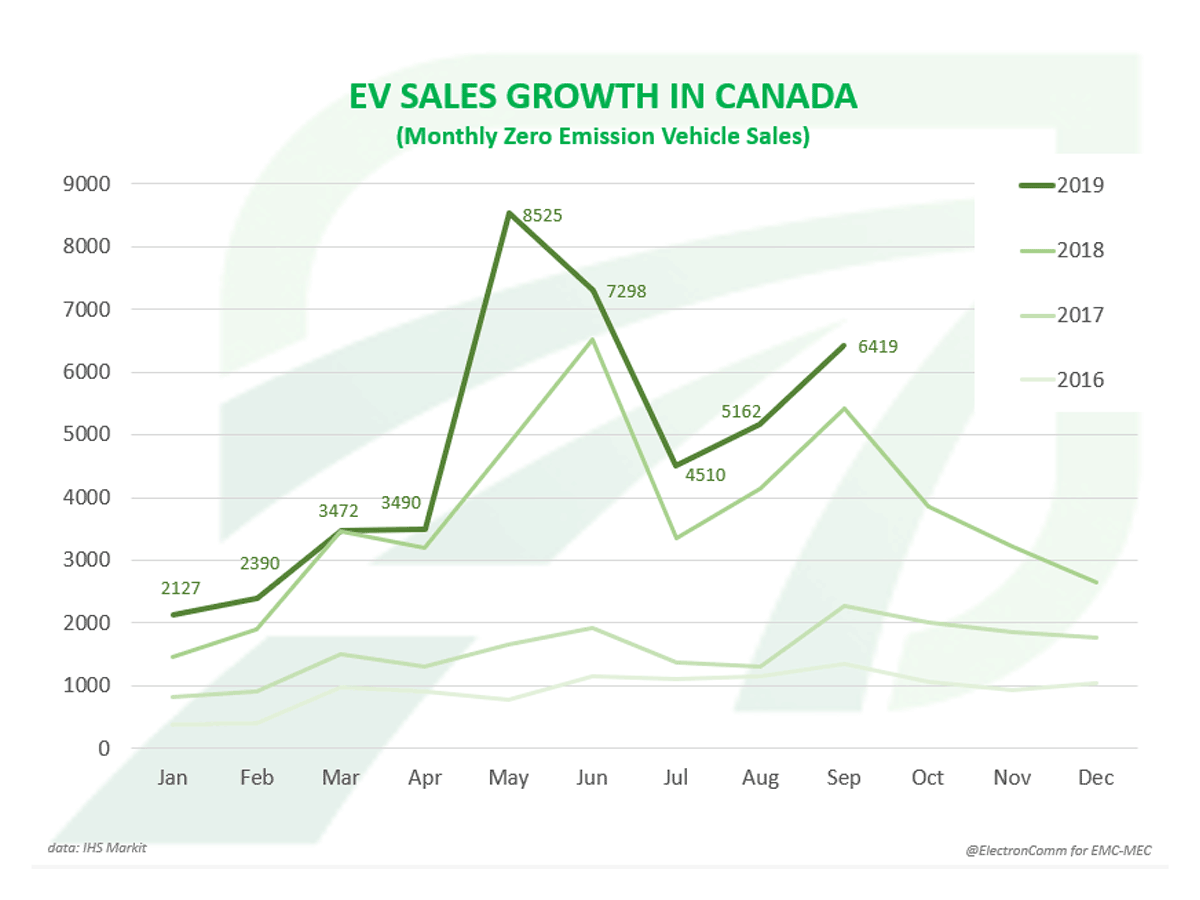 The desire to grow Canada’s nuclear industry is quickly gaining momentum – and is coming in the form of support for small modular reactors, or SMRs, as the technology of choice. In December 2019, the governments of Saskatchewan, Ontario, and New Brunswick entered into an agreement to work together on developing and deploying SMR technology. In February 2020, the formation of The Atlantic Clean Energy Alliance was announced in New Brunswick: a consortium of academic, public sector and industry representatives promoting the development of small nuclear reactors and other non-emitting technologies in Atlantic Canada. And just weeks ago, federal Minister of Natural Resources Seamus O’Regan voiced the federal government’s support for growing the country’s nuclear sector in an effort to position the country to achieve its net-zero emissions target by 2050.

Nuclear energy is nothing new – Canada currently generates about 15 per cent of its electricity from nuclear, with power plants located mainly in Ontario and uranium mining in Saskatchewan. However, the conventional nuclear reactors that we use today are large, expensive, and most are slated to retire within the next decade. Rather than replacing these facilities (which could take decades with regulatory processes and construction), small nuclear reactors present attractive solutions for many of the energy problems that Canada faces today.

First, they are scalable – allowing them to be used individually or together as part of a larger system. This flexibility enables them to be used in variety of applications, such as in remote areas of the country that aren’t grid connected. They can also fit onto existing brownfield sites, such as decommissioned coal fired power plants. And they are inherently safer than larger nuclear complexes – employing a range of passive safety features that work in a wide variety of conditions and don’t require active operator intervention. Given Canada’s need to bring down GHG emissions from energy production, looking to SMRs makes sense.

3D printed energy is closer than you think

There are a lot of things that 3D printers can do these days – and apparently printing energy-capture technologies is one of them. At the VTT Technical Research Centre in Finland, a team of researchers have successfully developed a prototype for an artificial tree that can be printed out of a 3D printer and capture energy from the sun and wind. These miniature solar trees mimic the look of real trees but have leaves made of organic solar cells and bark made of wood-based bio composites. At their current size, they can produce enough energy to power a cellphone or a small appliance and can be used both indoors and outdoors. Read the full story here.

This technology could enable renewable energy to be much more accessible (and perhaps more affordable) on a smaller scale, such as for powering things in your home. But if things go as planned and the initial models are successful, the scientists at VTT foresee their printing technology being scaled up to mimic life-sized trees in the future. And because the trees are replicable and could easily be mass produced, it’s not too far-fetched to think that we could see entire artificial, energy generating forests in our future.

CN developing a new way to send bitumen to market

A few years back, the Canadian National Railway (CN) set out to solve a problem – to get Canadian oil to market safely. But they also wanted to do this in a way that posed minimal risks to the environment (and even benefitted it). The result was CanaPux – a technology that solidifies bitumen into solid ‘pucks,’ which is mixed with and sealed in recycled plastic. The technology allows the bitumen to float in water, be picked up by hand, and presents virtually zero risk of an oil spill or leak. It can even be transported using existing infrastructure, such as rail cars and coal ports, which could allow oil companies to save on costs. But CN isn’t the only one involved – the Heart Lake First Nation is also partnering up to construct a plastics recycling facility that will source local plastic waste for the pucks. A pilot facility in Alberta is currently under construction. Read the full story here.

Over at the University of Calgary, a team of researchers is also doing something similar. Professor Ian Gates has patented self-sealing ‘bitumen pellets’, which are smaller than CanaPux and don’t require additives, but are a very similar concept. However, the pellets aren’t as far along the commercialization path. Since market access has been a persistent challenge for the industry for many years, these technologies present innovative ways to bypass some of the usual roadblocks. They could be a win for the oil and gas industry, and at least for CanaPux, also for Indigenous Canadians who have sought to play a greater role in the natural resource industry.

A small but mighty startup in Alberta is going full steam ahead on its plans to ‘green’ the marine shipping industry. The company, called Enlighten Innovations, is working to commercialize a technology that could allow oil sands operators to produce cheaper and cleaner marine fuel. Using chemical processes, their technology can be added onto existing refineries. It is expected to produce low-sulphur marine fuel at lower costs, in addition to reducing the lifecycle GHG emissions of the fuel by up to 40 per cent. In 2018, the company received funding from Emissions Reductions Alberta and Natural Resources Canada to build a pilot facility near Edmonton, Alberta, which is in operation today. The next steps will include gathering the funding and regulatory approvals necessary to take the technology to full commercial scale. Read the full story here.

Starting in 2020, the International Maritime Organization, an agency of the United Nations, established new regulations that will ban ships from using fuels with a sulphur content above 0.5 per cent (down from 3.5 per cent previously). The change has been long expected to place a downward pressure on Alberta’s already struggling heavy, sour crude oil producers. However, the company is hopeful that their technology will enable heavy oil producers – in Canada and around the world – to meet (or even exceed) these new standards, and even benefit from it.

Over 20,000 new wind turbines are installed globally each year, according to the Global Wind Energy Council. But what happens to these wind turbines after they’ve reached the end of their useful life?  A lot of people would be surprised to know that the typical operating life of a wind turbine is about 20 years, and even less for the blades (as low as 10 years).

Enter Re-Wind – a research program consisting of experts from several U.S. universities seeking to find new and sustainable ways to use wind turbine blades after they’ve been decommissioned. Because these blades are made up of composite materials, such as glass and carbon fibres, foam and resins, it is unsustainable for them to be put into landfills or incinerated. According to the group’s estimates, up to 40 million tonnes of these materials will require disposal by 2050 – and disposal costs are between $400 and $800 per ton. Hence, the program is setting out to find new and innovative ways to recycle the blades, which could include reusing them in buildings, infrastructure (i.e. bridges), or public art, for example. Read the full story here.