The COVID-19 pandemic has dramatically disrupted almost all facets of our lives. We believe this crisis is likely to accelerate the need for more efficient energy alternatives in the months and years ahead. We are continuing to produce the Energy Innovation Brief to provide up to date information in the hopes that it will help inform decision making as we move forward. In the meantime: stay well.

In Western Canada and around the world, the energy sector is rapidly transforming to one that promises to be cleaner, greener and more efficient. Each month, the Canada West Foundation’s Energy Innovation Brief brings you stories about technology innovations happening across the industry – in oil and gas, renewables, energy storage and transmission. If you have an idea for a story, email us at:

In this month’s roundup of energy innovation news:

General Motors (GM) has its sights set on an all-electric future. In early March 2020, GM revealed that it had developed an electric vehicle (EV) battery that it claims will not only outperform existing EV batteries but will also be more affordable. The single greatest expense in EVs is the battery cells, which currently hover between $150-$160 per kilowatt-hour (kWh) (based on 2019 numbers). With its new technology, GM has promised to reduce the price of its battery cell to below $100/kWh – a threshold that some experts claim is the sweet spot for enabling EVs to become truly cost competitive with most gasoline-powered vehicles.

The price reductions comes primarily from swapping out more cobalt (an expensive material mined in Africa that has also been linked to adverse health and environmental effects) with aluminum, which is both cheaper and easier to source. GM’s design uses 70% less cobalt, more nickel, and more aluminum than traditional EV batteries. But this exchange doesn’t limit performance. GM claims its battery will have a maximum driving range of 400 miles – beating out Tesla’s industry-leading 390-mile battery range. The final market advantage is a flexible design that allows the batteries to be scaled to fit different vehicle sizes and strengths – stacked together in groups of 6, 12, or 24, for example. Over the next five years, GM is planning to invest $20 billion to bring its battery technology to market. Read the full story here.

When most people think of solar panels, they think of bulky electrical equipment sitting on their rooftop. But what if you could generate electricity using just the windows in your house? That is the idea behind solar windows. These technologies, which vary in concept and design, allow glass windows to convert solar radiation into electricity, much like a solar panel. But unlike a solar panel, solar windows are less obtrusive, may have more practical applications (you’re going to install windows anyway), and according to some companies, could enjoy a payback period of just a few years rather than a few decades, as is the case with traditional solar panels.

While solar window technologies are being developed in several areas across the globe including the U.S. and Italy, an Alberta company has also thrown its hat into the ring. Based out of Edmonton, Applied Quantum Materials has successfully developed a technology called luminescent solar concentrators that could comprise an essential element of the solar window system. AQM’s technology is a nanoparticle coating that can be ‘painted’ onto a glass window to absorb the UV light from the sun and redirect it to solar cells located on the edges of a window frame, where it can then be converted into electricity. The company is currently working with other industry partners to scale the technology and hopes to reach commercialization within two to three years. Read the full story here.

Around the world, the oil and gas industry is looking to be a trailblazer in artificial intelligence (AI) and digital transformation. If this seems surprising, you haven’t met Spot. As the latest employee at Norwegian oil company Aker BP ASA, Spot is responsible for patrolling oil rigs and performing leak inspections, data gathering, and delivering safety reports. Oh, and did we mention that Spot is a robot dog? Developed by Boston Dynamics, Spot is a multi-talented, customizable dog-shaped robot that is designed for sensing, inspection, and remote operation – and at least in Norway, helping oil rigs to be safer and more efficient. Through its ability to capture and interpret large amounts of data, navigate, withstand extreme temperatures (+45 to -20 degrees Celsius), and monitor sites in real-time using its 360-degree, high-zoom vision, Spot is an ideal fit for inspecting oil and gas facilities. It also never gets tired. Spot is expected to experience its first day on the job at Aker BP ASA sometime this year. Read the full story here. 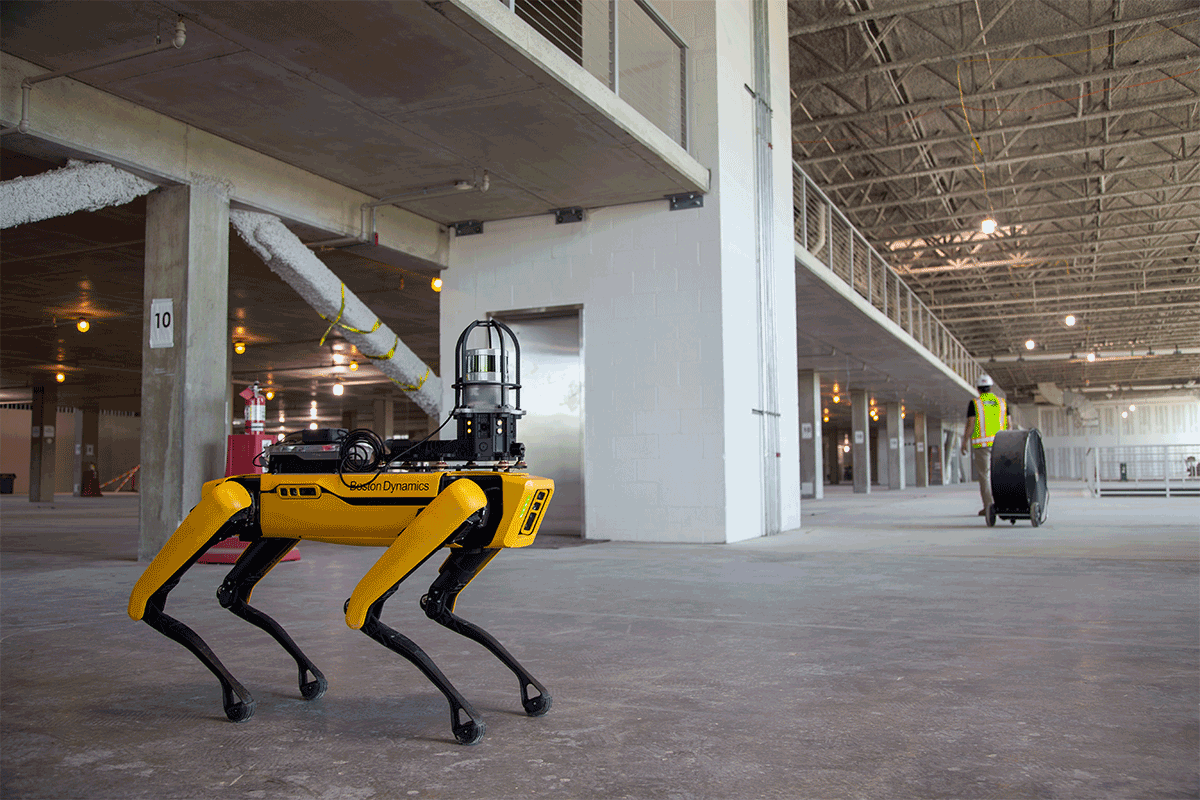 As they say, data is the new oil. The ability for AI to analyze, interpret, and model significant amounts of data at lightning speeds presents the industry with unprecedented potential to maximize productivity and efficiency. It will be interesting to see how different countries and companies are able to take advantage of this newfound opportunity.

Acceleware Ltd., a Canadian cleantech company based in Calgary, has found a way to improve heavy oil recovery while also dramatically reducing GHG emissions and freshwater use.  Rather than relying on steam-assisted gravity drainage (SAGD), Acceleware’s technology uses radio frequency heating – which they call RF XL – to heat the oil to temperatures at which it can be moved. Rather than an injector well, RF XL uses a transmission line that emits electromagnetic energy in the radiowave spectrum to heat the formation – in the same way a microwave oven does.

The environmental benefits are substantial, significantly reducing the need for fresh water, and, depending on the source of electricity, reducing GHG emissions by 25 to 100%. Acceleware also claims their technology reduces the operating and capital costs of heavy oil production by at least 40% compared to SAGD. In late 2019, the company completed a successful field test for its prototype RF converter and is now awaiting regulatory approvals to proceed with a test site in the Alberta oil sands. Read the full story here.

Today, the preferred method for heavy oil and bitumen production in Canada is in-situ steam-based technology, such as SAGD and cyclic steam stimulation (CSS). But they aren’t without problems. For example, these methods require large freshwater consumption and release high levels of CO2 into the atmosphere, both of which are factors that have drawn considerable environmental criticism to the industry. Although Acceleware’s technology may not be the answer to all of the oil sands prayers (i.e. it won’t be solving any market access issues), coupled with other emerging innovations such as bitumen solidification, it is certainly a step in the right direction both for producers and the environment.

Dusting off the science of cold fusion

Since the 1980s, research on cold fusion has been essentially taboo – the result of a scandal that involved charges of research fraud. But that may be about to change. A group of scientists from the University of British Columbia, MIT, Lawrence Berkeley Labs and Google, among others, are revisiting the science in search of a clean energy breakthrough.

Cold fusion is a nuclear reaction that has the potential to produce clean and cheap energy. Unlike nuclear fission, the process of splitting apart atoms that is currently used in nuclear power plants, fusion smashes atoms together – without the radioactivity associated with fission. Hot fusion occurs naturally in stars. Cold fusion involves creating the same atomic reaction, but without the need for star-like temperatures.

The idea of cold fusion has been explored for nearly 100 years but has been controversial, with many scientists believing it cannot be done. The multi-institution research team set out to re-examine different experiments involving hydrogen and palladium that have been proposed to generate cold fusion. While they have not (yet) found any evidence that cold fusion is even possible, the group believes that their potential learnings along the way in terms of clean energy research development represent a risk that is worth taking. Read the full story here.

A team at the University of Alberta is exploring new ways to create biofuels from forest waste – specifically from lignin, a structural material found in the tissues of vascular plants such as trees and straw. One of the most abundant and under-utilized renewable carbon sources on earth, lignin is mostly generated as a non-commercialized waste product during pulp and paper production. If it can be successfully (and economically) converted to biofuel, this could unlock significant market opportunities for Canada’s forest industry and provide a sustainable source of low-carbon energy for the future.

Using a lipid-to-hydrocarbon (LTH) technology developed at the university, the U of A researchers have partnered with InnoTech Alberta to explore ways to convert lignin into biofuels such as renewable diesel, ‘green’ gasoline, and biojet fuel. Currently, the researchers are continuing to work with InnoTech Alberta and forest products manufacturer West Fraser, which operates a lignin recovery plant in Alberta, to continue testing and developing their technology. Read the full story here.