“We would see eight feet of snow, and then all of a sudden a warm gust of wind would come.” Confused? So was Leonardo DiCaprio.

Chinooks have become such a reality for me since I have moved to Calgary – I sometimes forget that the rest of the world may not be well versed in the unique weather phenomenon. So, for Leo, and any else unfamiliar with the “unprecedented” gales that blow warm weather over the Rockies, a quick primer:

Chinook winds – also known as Foehn winds in other parts of the world – are a type of warm, dry wind that occur on the downward slope of a mountain when warm air has lost its moisture.

In Canada, the winds originate from the Pacific Coast. Cool as they blow up the Canadian Rockies, they warm significantly as they drop down the eastern slopes, freeing Calgarians for a few blissful moments from winter’s icy grasp. 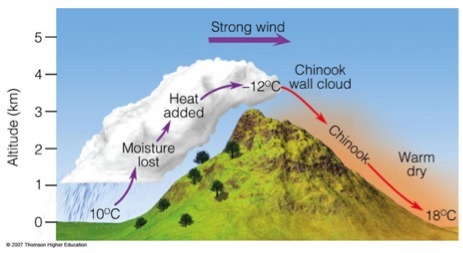 1) Legends celebrate – and warn of – the winds

Those who have not the warm, invigorating Chinook winds of this country, cannot well comprehend what a blessing they are. The icy clutch of winter is lessened, the earth throws off its winding sheet of snow. Humanity ventures forth to inhale the balmy spring like air. Animated nature rejoices. — Calgary Weekly Herald, 1900

There are quite a few famous folk tales and legends associated with the Chinook winds. One common thread in some native legends is that the warm air blows on the ridges to warn or send a message to people.

Another story, with Albertan origins, is about a man who rode his horse to church, only to find snowdrifts piled so high, only the steeple stuck out of the snow. So, he tied his horse to the steeple with the other horses, and used a snow tunnel to get into the church.

Upon his return, a few hours later, all the snow has melted, leaving the unfortunate horses dangling from the church steeple.

While the winds occur year round (November to May), frozen Calgarians tend to appreciate their thawing powers most in the winter months.

The word “Chinook” also refers to a member of an American Indian people of the north shore of the Columbia River (where the winds originate).

3) Southern Alberta has it all

While Chinooks can occur on the downward slope of any mountain in the world, including areas in Argentina and the Swiss Alps, in Canada they are most common in southern Alberta. More specifically in the Pincher Creek area and Crowsnest Pass through Lethbridge (second in getting more days with strong winds than any city in Canada).

Calgary on the other hand is the windiest larger city in Canada – famous for its Chinook winds (or so we thought, Leo).

4) Four seasons in one day?

The weather in Alberta keeps you guessing. Chinooks, sometimes comparable to hurricanes, bring astonishing temperature changes up to 20 °C  – once the warm wind sets in it can melt ice at a rate of up to one inch per hour and turn inches of snow into puddles of water, fast.

While most Albertans welcome the warm winds in sub-zero temperatures with open arms, some believe that the winds trigger migraine headaches (also called Chinook headaches). However, some studies have debunked this myth by saying there is not sufficient evidence to determine that link.