The Continuing Promise of the Last Best West

From the earliest days of Confederation, Western Canada’s population has depended on the migration of people headed West. The first pioneers and future entrepreneurs alike have found themselves drawn to the promise of a better life and a fresh start in “The Last Best West.” 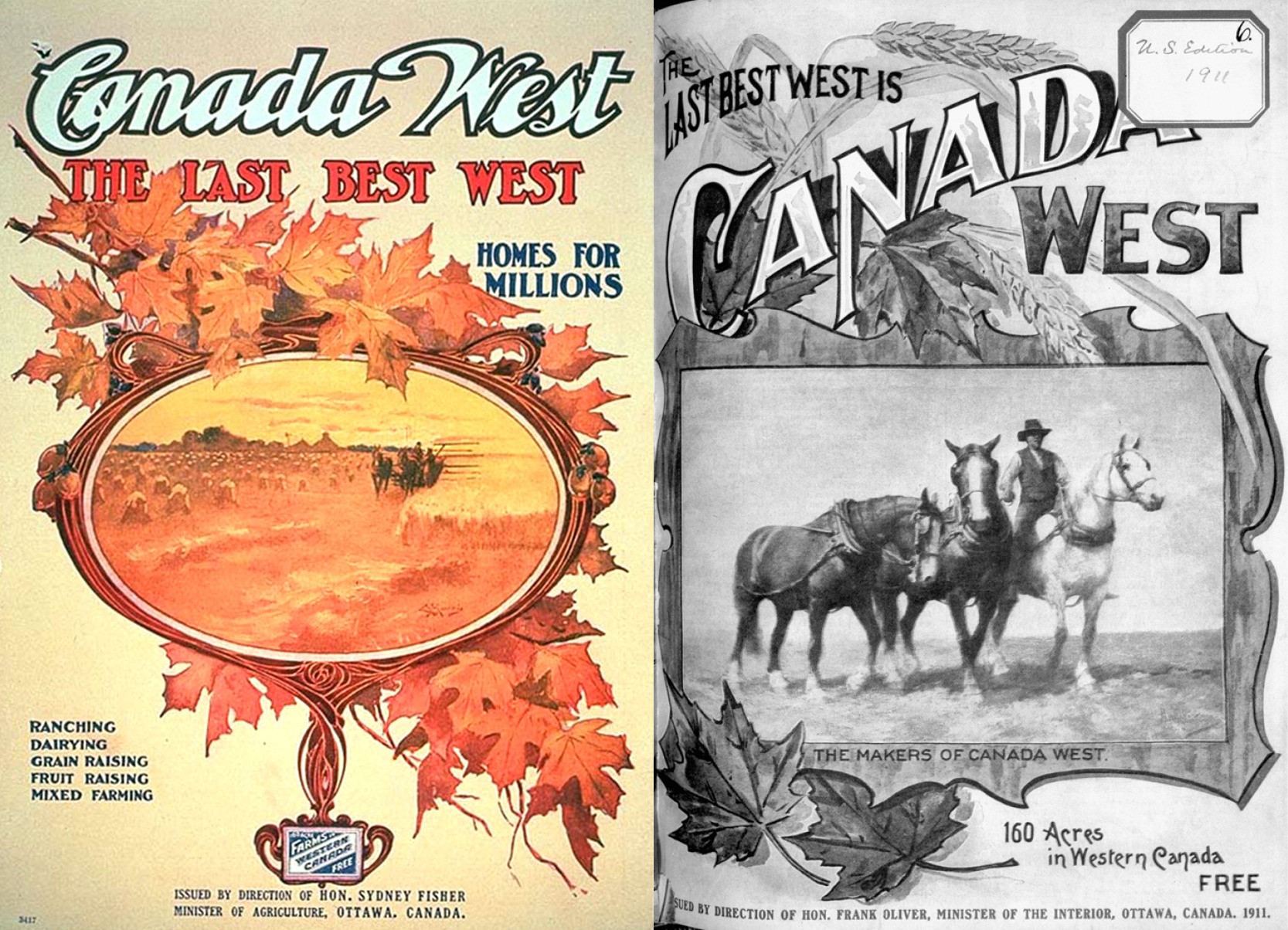 The future of interprovincial migration to the western provinces isn’t so clear cut.

Alberta and BC have experienced large swings in net interprovincial migration over the past 50 years. Change is the only constant. The benefits of the BC climate are well known to Canadians, but so are the high housing prices in the Vancouver and Victoria areas – other parts of the province are now attracting new residents. Saskatchewan and Manitoba on the other hand have fairly stable net migration, but still struggle to attract new residents. 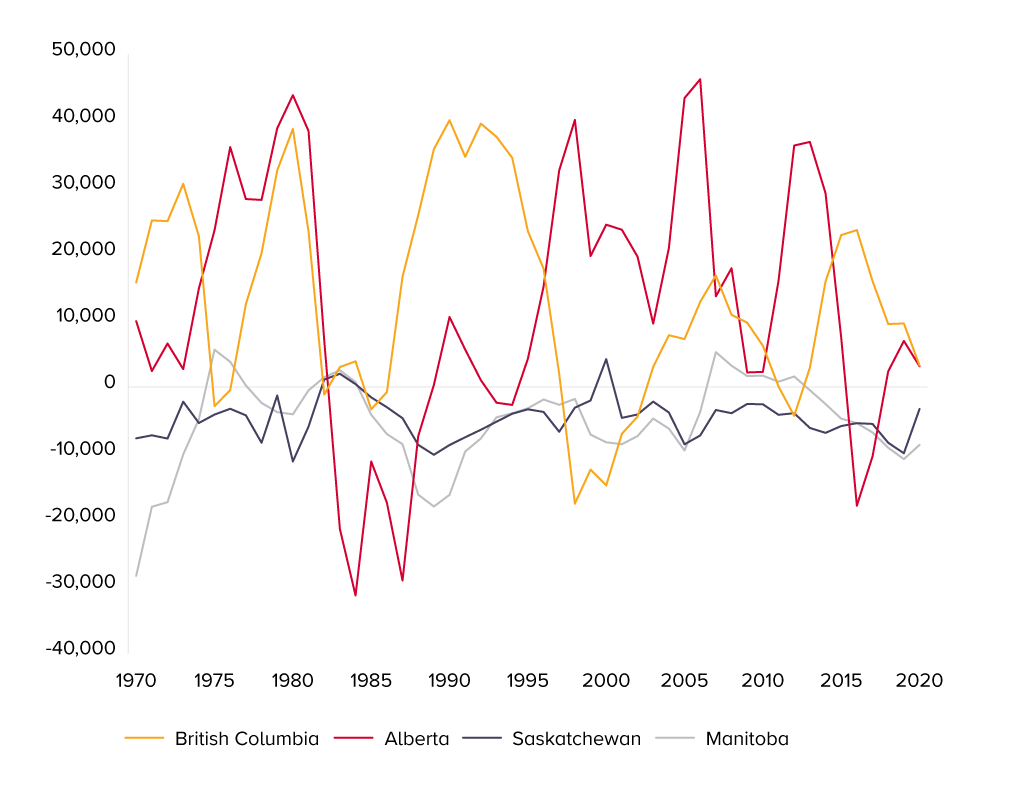 Busting up the boom bust cycle in Alberta

Alberta’s story involves welcoming newcomers from other provinces in boom times, many who stayed through the tough times too. Between 1971 and 2021, Alberta’s net interprovincial population growth reached just over 600,000. That’s a lot in a province with a population of 4.4 million at the end of 2020.

In northern Alberta, Fort McMurray has been called “Newfoundland’s third-largest city,” with almost 127,000 Newfoundlanders who moved to the oil sands boom town in the past 50 years. But they weren’t alone – just over 3.3 million Canadians moved to Alberta from other provinces in the same time period. Most came from BC, with more than one million British Columbians moving east to Alberta since 1971, or roughly one-third of all incoming migrants [1]. Interprovincial migration into Alberta peaked in 1979-81, when over 100,000 Canadians moved from other provinces to Alberta. Growth, however, has not been steady. Just five years after peak in-migration, Alberta experienced its peak outmigration as 73,000 residents left when oil prices bottomed out in the mid-1980s. In the last 50 years, 2.7 million Albertans left the province for elsewhere in Canada. Most went to Ontario, but almost as many Albertans moved to BC as British Columbians moved to Alberta.

Oil price declines that started in 2014, caused by the growth of US shale oil and gas production and actions by OPEC+, triggered a substantial outflow of people from the province. In 2020, 370,000 people left Alberta for other provinces. Even with record low oil prices, 357,000 Canadians moved to Alberta for a net loss of 12,000 people. [2]

What will the next 50 years hold for Alberta as a destination for other Canadians? There are likely to be fewer new major resource projects that would attract workers from other provinces at the same overheated scale as we saw between 2000 and 2010. Major oil and gas projects have been delayed or shuttered due to challenges that include lower oil prices, difficulties in transporting the product to market and changes in the federal environmental regulatory review process. At the same time, the transition to a lower-carbon world has initiated a rise in new jobs that are fuelled by technical innovation on sustainability. Alberta’s thriving cleantech sector, meanwhile, is also set to attract new skilled workers.

With a few blips, population outflows linger in Saskatchewan and Manitoba

In 1983, Saskatchewan’s population crested the 1 million mark. In celebration of this key milestone, the province threw a party, with then-Premier Grant Devine anointing Stephen and Lori Dennis ­– a married couple who had just moved to Regina from out of province ­ as official residents to carry the province above the total; a plaque was presented to commemorate the occasion. But the Denis’ didn’t stay long —they left in 1989, the same year the province’s population dipped below 1 million again. Just when Saskatchewan seemed to hit its stride on interprovincial migration, the tide turned. In 1989, people began to leave the province at a rate of 1 person every 23 minutes, making it one of the worst years for Saskatchewan’s out-migration. [3]

A consistent loss of people is not a new experience for Saskatchewan and Manitoba. With the exception of a handful of years where a positive net number of migrants settled in these two Prairie provinces, Saskatchewan and Manitoba have experienced a net outward trend in interprovincial migration. With relatively stable economies, especially compared to Alberta and BC, they haven’t experienced the boom-and-bust years. Population growth remains encouraging overall due to international immigration, but Manitoba and Saskatchewan have the lowest interprovincial migration numbers among all the provinces.[4] While Saskatchewan has seen an overall growth rate in population of approximately 26% since 1971, the province has also witnessed a loss of just over one million people during the same time period. Manitoba is not far behind almost the same amount of people who have left since 1971 – this despite a net growth of 38% in the province’s population.[5]  The question remains—how to address the perpetual exodus of people from the provinces attracted by opportunities elsewhere?

Manitoba has the most diversified economy in Canada – it weathers the ups and downs of various sectors because no one sector dominates the economy. It also has a relatively large finance sector that is not exposed to strong variability in the local economy. Saskatchewan’s growing oil and gas sector is smaller than Alberta’s and it represents a smaller share of the province’s economy – and while it has experienced the ups and downs of oil prices, its growth is less reliant on construction of major projects which attract inter-provincial migration.

British Columbia has been one of the top destinations for interprovincial migrants (next to Alberta and Ontario), which account for more than 30% of the provincial population in every census during the last 100 years.[6] Over the past 50 years, BC and Alberta have been engaged in a regular population swap. Each are the other’s biggest sources of Canadian newcomers, with slightly more Albertans going to BC, than vice versa.

The comings and goings in the two provinces are tied in another way – for the most part, Alberta and BC are complementarity destinations for Canadians. A good example is 2015/2016 when Alberta lost more people than it gained, British Columbia was the principal beneficiary of net interprovincial migration among the provinces in Canada, second only to Ontario.[7]

The temperate climate of the West Coast has a draw of its own, but burgeoning economic opportunities have equally drawn a stream of newcomers to British Columbia—and not just to the Lower Mainland. Recently, the lush Okanagan Valley has benefited from a population explosion. It received an impressive 20.3 people per thousand new residents during the last census in 2016, all thanks to interprovincial migration. [8] Other regions of the province are set to continue to experience growth into the future. Clean LNG developments along the coast, led by the LNG Canada project – the largest single private sector investment in Canadian history – are driving employment (96,000 jobs annually in BC as well as across Canada over the next 50 years) and attracting Canadians to northern BC’s gas fields, pipeline construction and operation of liquification plants and marine terminals and related services[9].

[1] Statistics Canada. Table 17-10-0022-01 Estimates of interprovincial migrants by province or territory of origin and destination, annual