READ what the Business Council of Canada, Canadian Chamber of Commerce, Canadian Construction Association and others in Canada and abroad are saying about From Shovel Ready to Shovel Worthy.

For more than a decade, international surveys have shown confidence in the reliability and competitiveness of Canada’s trade infrastructure has been in decline at home and abroad. This has occurred despite significant investments by the private sector and current levels of trade infrastructure spending by governments. In a country that relies on moving goods to and from foreign customers for two-thirds of its GDP, this is a serious problem.

While increased funding dedicated specifically to trade corridor infrastructure is required, it alone is not the answer. Rushing to impose quick-fix solutions to issues dominating the news will not restore confidence in Canada’s trade infrastructure. 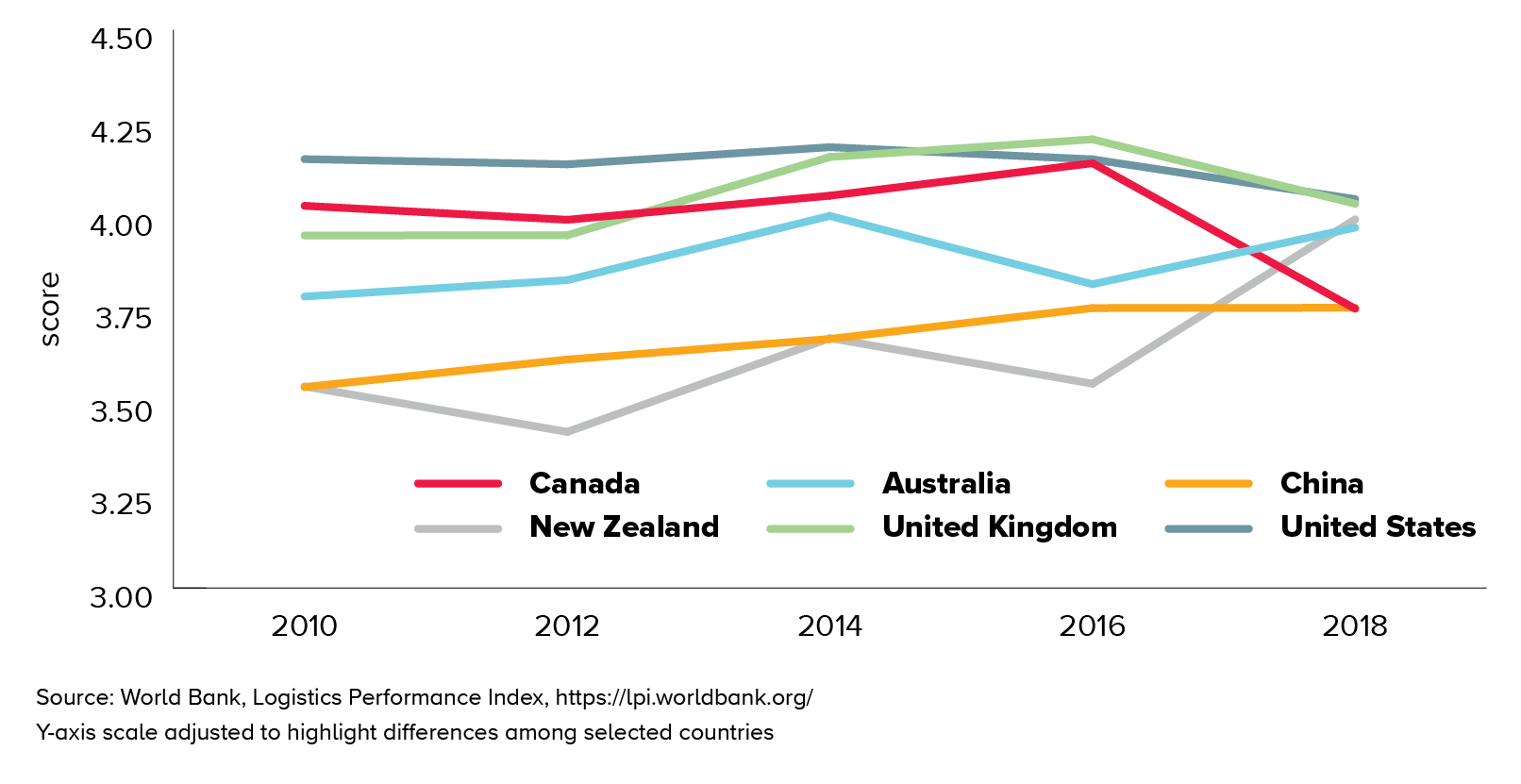 The path to returning to the top of global trade infrastructure rankings and restoring the confidence of foreign customers requires that, instead of “shovel ready,” Canada institutionalize an ongoing intelligence-based national plan for its trade corridor infrastructure. Drawing on the best features of already well-established national plans of competitor countries together with Canada’s own program successes, like the previous Asia-Pacific Gateway and Corridor Initiative and Transport Canada’s current Regional Transportation Assessments, offers Canada a shortcut
back to trade infrastructure excellence.

As the federal government turns to economic growth through the spring 2022 budget and the National Infrastructure Assessment, the report provides seven building blocks that are critical to the development of a nation-building infrastructure plan to grow the country’s trade economy.

What others are saying about From Shovel Ready to Shovel Worthy

“Strategic investments in infrastructure – including roads, bridges, airports, rail lines, and port facilities – are essential to helping businesses compete, grow and create more jobs for Canadians. In a world where our supply chains are increasingly exposed to geopolitical risks, Canada needs strong transportation and trade corridors so that it can supply the world with the products it needs to achieve both our economic and environmental goals.”

“Canada’s infrastructure must be a genuine investment that is based on clear priorities and measurable economic returns. As we plan new critical infrastructure to move our people and goods, we need to build for the future and not simply address today’s needs. Above all, we require approval processes that are transparent and fair, but that also allow projects to be undertaken much more quickly and efficiently. We must act now to ensure Canada does not fall further behind our competition.”

“It is vital that we scale up our trade infrastructure now to build supply chain capacity, support green innovation and emerging technologies, and fuel our global competitiveness.  This investment will benefit all Canadians.”

“This is a lost decade for investment in export capacity – equipment, facilities and the public infrastructure necessary to produce and transport goods to global growth hot-spots. What we are seeing right now is a lack of ability to grow because of that missing investment.”

“Trade infrastructure is vital to Canada’s economic growth and long-term prosperity. This report makes the case that our infrastructure has suffered from years of neglect, undermining our ability to compete globally. Most importantly, it is a call to action to create a coordinated, long-term strategy to build a more prosperous Canada through shovel-worthy projects that secure our collective future.”

“Moving to shovel ready, and away from sporadic, short-term investments in trade transportation networks, is fundamental to moving Canada to new and expanded global trade. And trade is Canada’s path to economic stability and growth.”

“It’s important that someone is proposing solutions to trade infrastructure issues. JORI Logistics’ 500-plus clients, all small and medium sized importers and exporters, depend on a steady inflow and outflow of products to run their businesses. These businesses don’t have the same resources available to them as large companies, which leaves them particularly vulnerable to trade infrastructure problems.”

“Trade infrastructure is the oil that keeps the engine running. It’s often unnoticed, but without it everything grinds to a halt and the repercussions are felt through the whole economy.”

“As a trading nation, Canada’s success is closely linked with the strength and competitiveness of our multi-modal transportation systems and key trade corridors.  Saskatchewan and the West produce much of what the world needs.”

“There are established best practices from other jurisdictions that can help us create a new national framework, without having to re-invent the wheel, we just need to look at their success and build upon it.”

“Canada’s economy depends on the ability to access world markets which includes the transportation of goods through road, rail, ports and pipelines efficiently and dependably.  As a landlocked province, Saskatchewan is particularly impacted by trade corridor issues. The CWF report captures the existing and growing infrastructure challenge and outlines a tangible path toward the next generation of economic growth.”

“The time has come to Western Canada to unlock its full potential by insuring we have efficient, climate resistant, world class infrastructure to get our world class products to the world.”

“For a country that relies on international trade for 65% of our national GDP, the findings in the CWF report From Shovel Ready to Shovel Worthy should alarm Canadians. When we can’t move goods, we can’t sell them. Our exports will create less revenue and our imports will continue to cost more. Neglecting infrastructure costs taxpayers more and undermines our ability to fund social programs.”

“Our infrastructure problems go deeper than responding to the latest slide or flood. Unless we get the basis for decision-making down, including factoring in climate change issues, we’re always going to risk making sub-optimal decisions.”

“As a certified logistics professional, municipal elected leader and economic developer – this report integrates what I’ve long struggled to articulate to all those who make policy and capital investments across this country. It should be required reading.”

“We are fundamentally a trading nation and the long term sustainability of our infrastructure is the foundation to increased supply chain competitiveness. It is imperative that we get it right to not only find the best long-term value for the rate payer but also ensure Canada can harness the full potential of the global access we enjoy.”

“CCCJ members recognize Canada’s international reputation and trade competitiveness is being undermined by the state of infrastructure in Canada. This report identifies the problems and proposes viable solutions to ensure Canada remains trusted as a reliable, secure and stable supplier to Japan and other international partners.”

“This new Canada West Foundation report reinforces data released by the Canada China Business Council in 2021, showing just how important exports are to Canada’s current and future prosperity. China’s demand for Canadian products generated record exports in 2021, and these exports benefit Canada at multiples of their reported export value.  The continued growth of middle-class Chinese consumers will help our exports continue to increase, but only if Canada’s infrastructure can keep up with that demand.  We hope that Canada will take to heart the negative implications of its drop in the rankings and ensure that global demand for Canadian products will not be satisfied by better-performing countries like the U.S.”