By Sharon Zhengyang Sun and Carlo Dade
Published in iAffairs

Canada’s agriculture exporters have enjoyed unanticipated advantages in Japan after the U.S. decided to quit the Trans-Pacific Partnership.  However, this month, the U.S. and Japan signed what is being termed a “partial” trade agreement that is expected to come into effect on January 1. For the Japanese market, the deal essentially gave the U.S. back some of what they lost when they left, and a lot of what Canada had gained under the Progressive Agreement for Trans-Pacific Partnership (CPTPP).

This is bad news for Canada. But, it’s not the end of the world. The agreement will pose several difficult but not insurmountable challenges for Canadian business and policy makers in the Pacific Rim. The immediate challenge is to defend gains made in the Japanese market from the return of a wounded and more aggressive United States agricultural sector.

If Canadian businesses and export promotion agencies can move quickly to focus efforts on advantages it still has over the U.S. in Japan, it can still do well. Doing so will also better prepare Canada to be more competitive in other CPTPP markets if the U.S. signs bilateral deals with other CPTPP members.

The Japanese tariff concessions under the deal are almost exclusively in agricultural goods[1]. This is bad news. Canadian agricultural exports are the key winners in the Japanese market from the CPTPP deal. Specifically, some of the key exports impacted by the U.S.-Japan trade agreement are pork, wheat, barley, beef and potatoes.

Canada has done especially well in Japan taking agricultural market share from the Americans. Pork was one of the largest Canadian export goods to Japan before the CPTPP and has seen substantial growth since the CPTPP came into force. Fresh or chilled boneless pork (HS 020319), for example, was Canada’s fifth largest export (at the HS 6-digit level) to Japan with C$892 million in 2018. Furthermore, we estimated a potential total Canadian gain of 204.9% with Japan under the CPTPP before the U.S.-Japan trade agreement. This opportunity has been a welcoming relief for Canadian pork exporters in light of trade actions and market developments in China. But this will no longer be the case as U.S. will share the same tariff benefits as Canada for pork with Japan (Table 2). 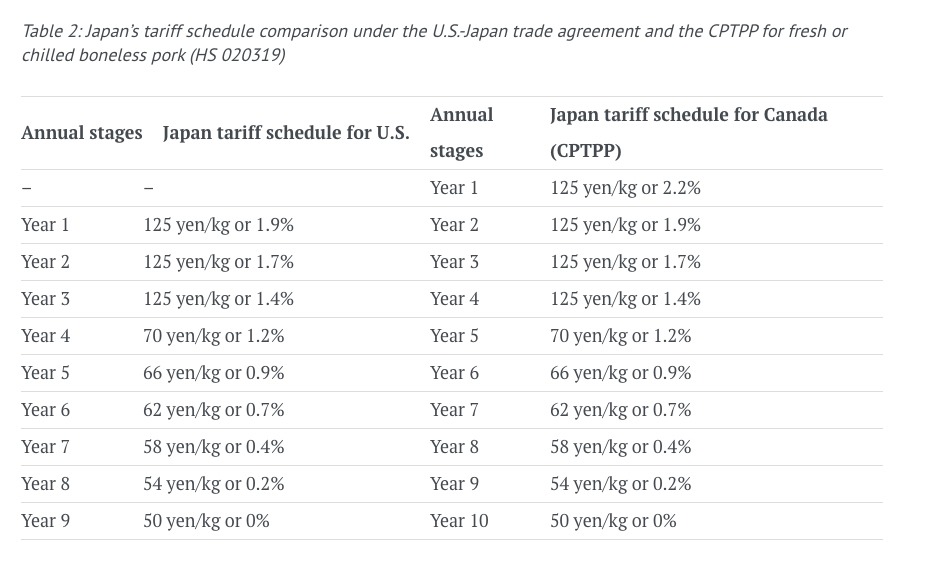 Extensive goods, or the less-obvious, previously smaller volume Canadian agriculture exports to Japan, such as beef, barley and potatoes have all seen tremendous growth (see Table 1). Between 2017 and 2018 alone, fresh or chilled beef has seen growth of 104.71% and barley 70.55%. But now, the U.S. will also share the same tariff reduction schedule as Canada for Japan (see Table 3). Year one of tariff cuts for pork, wheat, beef and potatoes for the U.S. matches that of the year two tariff cut for Canada with Japan under the CPTPP. Given how hard American agriculture has been hit by the country’s trade wars U.S. exporters will move aggressively.

Nevertheless, there is some good news for Canada. The agreement does not cover the 24 other areas in the CPTPP including dispute resolution. In addition, not all agricultural exports are affected. Canadian seafood exports to Japan will not be impacted and are expected to continue to see high growth. For example, Crustaceans (HS0306) is ranked top 15th in Canadian export to Japan at the HS 4-digit level with C$124 million and 43% of Canada’s total seafood export to Japan in 2018. Furthermore, specific fish products in which we estimated to have total growth of 39.1% to Japan under the CPTPP are not exported between U.S. and Japan.

Finally, thankfully we export a lot more to Japan than agriculture.  This still leaves everything else as an area of potential advantage for Canadian firms in Japan such as lumber and bitumen exports – which will not be impacted. But Canada needs to move aggressively to lock down these advantages before the U.S.-Japan trade deal is expanded.