While only roughly 50 years old, canola already has an impressive – and intense – history.

First introduced in the 1970s, canola is the country’s only “Made in Canada” crop. Since then, it has transformed agriculture on the Prairies and turned a profit for many farmers who rely on it as a financial anchor crop. The seed at one time best known for its use as a cooking oil and increasingly, as premium protein for animal feed, has also gained a reputation for its health benefits and the environmental sustainability of the way it’s grown. As demand grows, especially for canola oil in renewable fuel, canola crushing capacity in the Prairies has skyrocketed in recent years. Meanwhile, canola has become a main character in a high-profile geopolitical dispute between Canada and China. Today, predictability of demand for Canada’s canola exports is a major concern for growers in the face of a historic market volatility.

Made in Canada – Western Canada, to be exact

In the early 1960s, researchers were working to develop a seed that was low in erucic acid and glucosinolates — fatty acids that are problematic for cardiovascular health. The team, which involved University of Saskatchewan, the University of Manitoba, Agriculture and Agri-Food Canada, and National Research Council’s (NRC) Prairie Regional Laboratory (PRL) researchers, created a viable seed through conventional breeding of rapeseed, a relatively minor crop in Western Canada. In the 1970s, Dr. Keith Downey and Dr. Baldur Stefansson, the “Fathers of Canola” were focused on breeding out both erucic acid and glucosinolates. In 1974, the first variety with zero erucic acid and low glucosinolates (“double-low” variety) was registered. The new plant was named canola, a contraction of “Canada” and “ola”, referring to oil.

Canola has since become a major source of cooking oil, margarine, salad dressing and shortening. It took the agri-food industry across the world by storm by offering a healthier alternative to traditional oilseeds. Canola has also become a choice crop for its comparatively limited environmental impact—especially compared to its main global food oil competitor, palm oil, which is tied to large-scale rainforest deforestation and attendant massive greenhouse gas emissions each year equal to 0.8% of total global emissions or almost half that of global aviation emissions. Western Canadian universities continue canola innovation, notably through recent efforts to use canola meal in nutritious livestock feed and biodiesel production. [1]

The canola industry takes off

Between its introduction in the early 1970s and 2020, canola production in Canada jumped approximately ninefold to more than 18.7 million tonnes in 2020, up from 2.17 million tonnes in 1971. [2] Like other crops, canola remains at the mercy of world markets and unpredictable weather alike (the 2002 drought, for example, made for a particularly difficult year), but it has proven to be a reliable—and profitable – choice for farmers. Canola is the highest single source of farm crop revenue – accounting for about one quarter of all crop revenue in Canada. Canola’s annual production hovers around 20 million tonnes in Canada, with canola seed, oil and meal accounting for $11.9 billion of Canadian exports in 2020. [3] 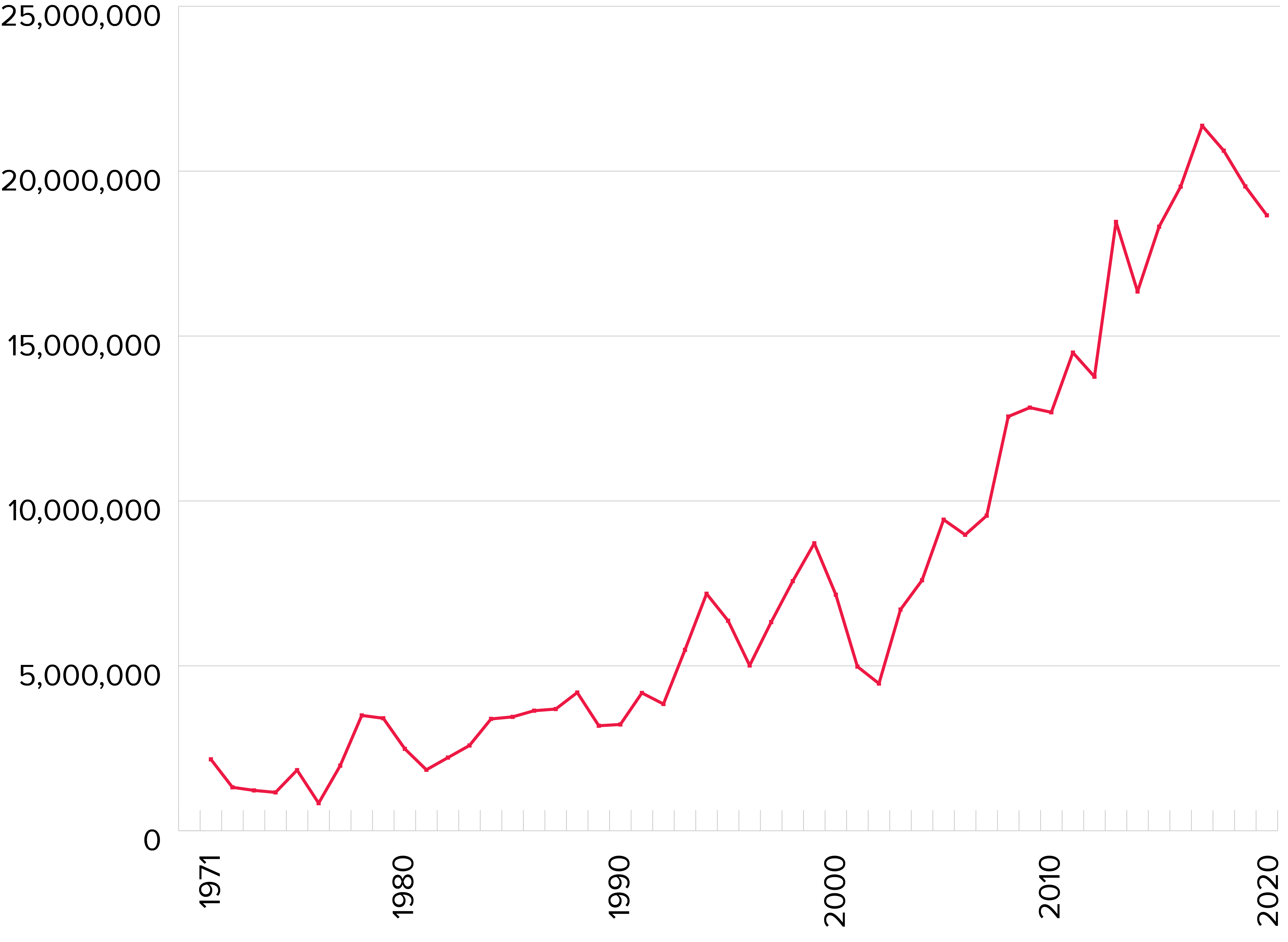 While landmark in the evolution of Canada’s overall agricultural landscape, the introduction of canola as a key crop has had an even greater impact in Western Canadian. In 1971, the Western provinces produced 2.1 million tonnes of canola. By 2020, this production had grown to just over 18.6 million tonnes. In 2020, of the 20.8 million acres of seeded area of canola in Canada, Saskatchewan accounted for 54.5% of total production, while Alberta and Manitoba each contributed 28.3% and 16.4%, respectively, to the annual canola production. [4]

While around for less than 50 years, canola has seen its share of trade tensions and disputes, particularly with China.

Over the past decade, periodic—and as of yet, unsubstantiated—concerns over the quality of Canadian canola, and its content of blackleg, a disease affecting canola crops, have been voiced by the Chinese administration. First in 2009 and again in 2016, these claims have prompted China to impose restrictions on the importation of Canadian canola seed (read more in CWF’s What Now? Canada’s China Canola Challenge). In each previous dispute, Canada and China signed a Memorandum of Understanding (MOU) to ensure Canadian canola exporters continued access to China. The most recent one was signed in 2016 and was meant to ensure access until 2020.

As recently as March 2019, China cited “quality control” issues with Canada’s canola seed and suspended the licenses of Canada’s two largest ag-export companies—Richardson and Viterra. While trade of canola meal and oil continues – with some smaller companies allowed to export their canola seed to China – Canada’s canola seed exports are down 50-70%  compared to pre-blockage levels in 2018.

Rising political tensions between Canada and China have led to speculation in Canada that the canola issue had more to do with wider political circumstances than any actual problems with the canola—especially considering the Canadian Food Inspection Agency has repeatedly tested the canola and found no issues with quality. Between March 2019 and August 2020, it is estimated that the trade dispute with China has cost the canola industry anywhere between C$1.54 billion and C$2.35 billion from lost sales and lower prices—collateral damage that has been borne largely by farmers.

The Government of Canada has taken some steps to challenge the disruption of canola trade with China – including taking the dispute to the World Trade Organization in October 2019 – at present, the issue remains unresolved.

Today, despite export woes (or perhaps because of them), business is booming in Canada’s canola processing industry. With four new or expanded crushing plants announced in Saskatchewan this spring ­– including the world’s biggest canola-crushing plant ­– the country’s canola production capacity is set to skyrocket to about 16.5 million tonnes a year, up from 11 million.

The ability to crush more canola at home sets the stage for increased demand for canola – and higher prices for farmers. Demand for biofuels is partly what’s fueling the eye-popping growth in canola crushing. Biodiesel and renewable diesel, which are derived from renewable materials such as plant oils or animal fats, is meant to be a cleaner substitute for diesel. Canola oil has a good chemical makeup for bio/renewable diesel and a better reputation for sustainability than its competitors, as soybean and palm oil bring concerns over deforestation. The federal government’s new Clean Fuel Standard, which is set to take effect next year, is also at play, as it requires a reduction in the carbon content of gasoline, diesel and other fuels of between 12 and 14 per cent by 2030. Meanwhile, demand remains high for canola oil for human consumption, which will also be served by the growth in crushing capacity. Industry analysts see the expansion of Canada’s canola crushing capacity as a move from export-oriented to a domestic use industry – an opportunity for Canada to add value, and economic security, to a key resource.

Meanwhile, Canada has seen some diversification of the markets to which it exports canola. In 2018, Canada’s top export destinations for canola seed were China, Japan and Mexico. By 2020, Canada had also turned to France, the United Arab Emirates and Germany as key destination markets.

Market diversification has allowed Canada’s canola sector to recover—though not entirely – from the 2019 restrictions. But China remains central to Canada’s canola exports. Some of the new destination markets Canada has expanded to are not consumers themselves of canola seed—they are importing Canadian canola seed to export it in turn to China.

Canada’s trade competitors such as Australia and New Zealand have recently upgraded their trade agreements with China, and the US has recently penned an “America first” Phase One trade agreement with China. Canada – and its canola farmers – risk getting left behind. A focus on better managing trade that continues to grow despite political tensions between the two countries, is essential.

For a full analysis and set of recommendations, read When Interests Converge: Agriculture as a basis of re-engagement with China.

To stay up to date on Canada’s trade relations with China, subscribe to Canada West Foundation’s China Brief.

Dade, Carlo and Sharon Zhengyang Sun. “When interests converge: Agriculture as a basis of re-engagement with China.” November 2020.