This report is the third in a series that presents the results of the Confederation of Tomorrow 2020 survey of Canadians, a national public opinion study that gives voice to Canadians on the future of the federation. The third report explores issues relating to identity, values and language and is published in three separate parts. The first two parts are available below, with the third part on language coming soon. 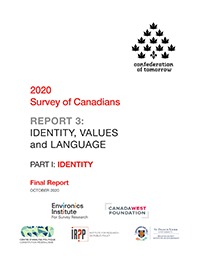 Regional tensions in Canada are often driven by conflicting economic interests, but may also be the product of differences in values. In recent years, attention has been drawn to potential value differences over religion and its place in public life. Francophone Quebecers are assumed to be more secular than other Canadians, and more adamant about the strict separation of church and state. This secularism (or laïcité) underpins public support for Quebec’s Bill 21, a law adopted in 2019 that prohibits certain public officials from wearing religious symbols in the exercise of their official duties. The law was a frequent topic of discussion in the October 2019 federal election, as party leaders were pressured to pronounce on whether they would support efforts to challenge the province’s law in court.

Against this background, this third report from the Confederation of Tomorrow 2020 survey of Canadians explores the extent of value differences across the regions of Canada, particularly as they relate to religion and the question of how the state, in a secular society, should exercise its religious neutrality. It also examines whether recent debates about how to balance majority rule and minority rights in a democratic society have affected Canadians’ attitudes toward the relationship between governments and the courts. 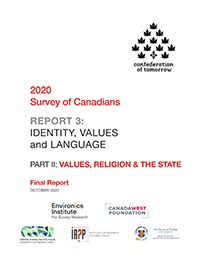 Previous surveys have confirmed that language is an important part of most Canadians’ personal sense of identity; that majorities in Canada support the policy of official bilingualism and believe it’s important that their children learn to speak a second language; and that most Quebec francophones believe that the French language in Quebec is threatened. 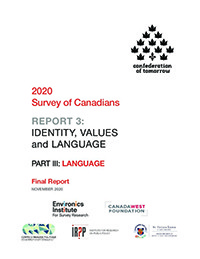 The Confederation of Tomorrow 2020 Survey of Canadians was conducted by the Environics Institute for Survey Research, in partnership with four leading public policy organizations across the country: the Canada West Foundation, theCentre D’Analyse Politique Constitution Fédéralisme, the Institute for Research on Public Policy, and the Brian Mulroney Institute of Government at StFX University.  The study consists of a national public opinion survey of 5,152 Canadians (aged 18 and over) conducted online (in the provinces) and by telephone (in the territories) between January 13 and February 20, 2020.

Report 1: Regional Perspectives on the Economy and Climate Change

Report 2: The Division of Powers and Resources