Introduction: Getting to where we need to go

The government’s call for a National Infrastructure Assessment, Building the Canada We Want in 2050, comes at a critical time for the country. Getting the Assessment right can provide unparalleled long-term economic benefits for Canadians, starting with the country’s post-COVID recovery. It can be the road map to build the country that we want.

A key component of the Assessment, as outlined in this submission, will be the infrastructure assets and institutions that make up Canada’s trade corridor infrastructure. The product and services mix transported via these corridors has evolved and will continueto do so, but the reality is that nearly two-thirds of the country’s GDP is linked to the trade enabled by this category of infrastructure. Canada will need to increase its productivity in the future to remain competitive if we are to retain and grow the market share for Canadian products and services abroad. This submission focuses specifically on trade enabling infrastructure, the infrastructure which drives Canada’s trade- based economy today and will do so in the future.

The National Infrastructure Assessment is a unique opportunity to introduce a permanent national plan, regularly updated, that will optimize Canada’s trade corridor infrastructure. Such a plan can address the elements to improve the assets and systems that move goods, people, ideas, and money to and from markets to generate prosperity while at the same time enhancing Canada’s reputation as a dependable trade partner nation.

The government can significantly improve its chances to get the assessment right by leveraging existing international best practices together with domestic learnings from when Canada’s trade infrastructure was ranked amongst the top 10 in the world, as well as more recent advances like Transport Canada’s Regional Transportation Assessments.

An infrastructure assessment is also critical to formulate policy responses to new economic security challenges posed by supply and production chain vulnerabilities. Without this information the country cannot formulate meaningful responses. Our political allies and economic competitors are using infrastructure assessments to gain economic and security advantages. This assessment offers a chance for Canada not just to catch up, but lead.

Building on this, a higher priority and more inclusive, transparent, longer-term plan for trade corridor infrastructure will enable economic returns to pave the way for other government priorities including social and environmental objectives and to assist the transition to the emerging economic future that Canadians want and need.

The Case for Prioritizing Trade Infrastructure in the Assessment

To build back better, the government will have to make use of every available lever for national recovery. Not usingall available assets leaves money and resources on the table, weakens chances of success and damages credibility. A clear focus is critical as is attention to the infrastructure that is the foundation for the country’s economy, and source of funding for building back better, is therefore critical.

Nearly two-thirds of Canada’s GDP comes from trade. This figure is above the global average and more than double that of the U.S. For Canada, the portion of this figure devotedto exports has steadily climbed from 28.5% in 2009, but still falls well short of the high mark of 44% in 2000.1 Recently, Canada’s exports have claimed an even greater percentage of GDP as demand for Canadian products remained strong during the pandemic. With projections among most analysts of a new “commodity supercycle,” that demand – and the incomes, jobs and tax revenue exports generate – are projected to grow even more. There is a real and clear potential for exports to contribute more to GDP, and by extension COVID recovery, to build back a new and better Canada.

As the call for public engagement in the Assessment correctly notes, “Canada is in a competitive global race at a time of a rapidly changing climate, digital transformation, changing demographics, and shifting geopolitics. Countries with next- generation infrastructure will be outsized winners at this critical movement of transformative change.” Yet, global confidence in Canada’s trade infrastructure has, according to global rankings by the

World Bank and World Economic Forum, been consistently falling. The country’s infrastructure ranking has fallen steadily from 10th best in 2008-09 to 26th today. More disturbing, when the specific category of transportation infrastructure is pulled out Canada ranks 32nd.

U.S. Transportation Secretary Pete Buttigieg recently described the urgency to correct a relatively smaller American decline in these same world rankings as key to the rationale for the new Biden infrastructure plan. The U.S., which as recently as 2010 trailed Canada’s then 10th place global ranking, fell recently to 13th from 11th. Citing their two-place drop as an unacceptable step back in competitiveness, productivity, and available jobs for Americans, Buttigieg highlighted massive transportation investments as part of the more than $2 trillion infrastructure proposal. 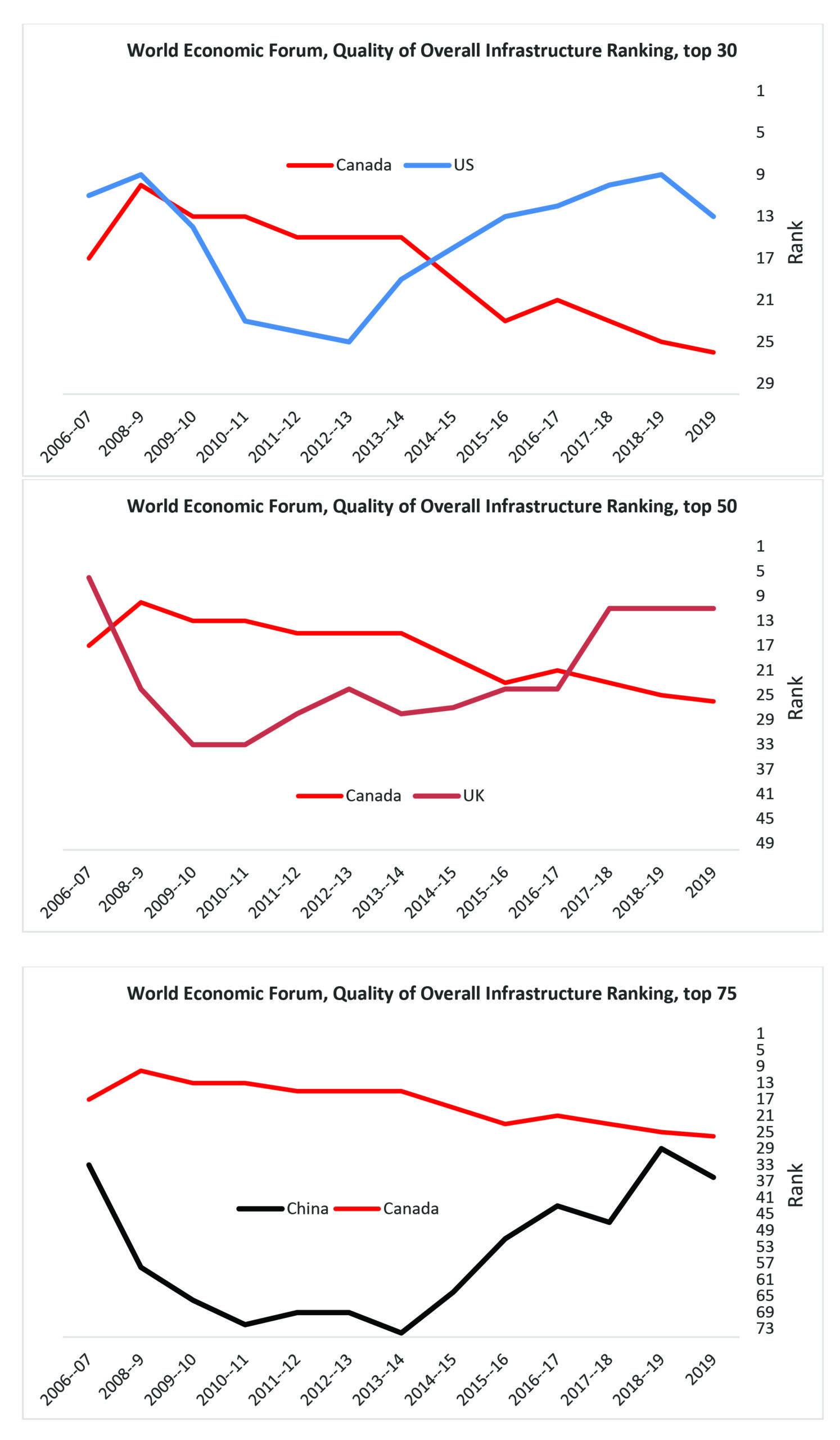 Canada’s recent drop in world rankings is a signal from the global market that something more than a one-off initiative is required.

The primary objective for the National Infrastructure Assessment therefore should be to prioritize the development of a long-term plan to improve Canada’s trade corridor infrastructure as Canada’s major competitors have done and which reflects global best practice. This approach must include a permanent, long-term planning horizon which recognizes that the planning imperatives for trade infrastructure work on a 25-to-50-year timeline compared to the four to five-year government electoral cycle.

Canada has advantages upon which to build such a plan to help catch up or even leapfrog competitor jurisdictions. Two in particular are recommended to guide this work:

A specific focus on trade infrastructure, as part of the National Infrastructure Assessment, needs to:

For trade infrastructure, a common starting point suggested by international best practices is to assemble a current picture of the country’s national network of key economic corridors, transportation assets and infrastructure projects that comprise the national supply chain. This perspective helps to create a shared frame of reference which describes these interconnected transportation components and in so doing facilitates coordination between the private sector and different levels of government, each of which own or manage different logistics assets along the corridors of the network. The resulting “one – network view” can also provide a more comprehensive basis to identify high- priority infrastructure investments to address future bottlenecks, redundancy, and capacity.

A forthcoming Canada West Foundation report details Canada’s past trade infrastructure wins, including national programs like the APGCI and the excellent recent work by Transport Canada’s trade policy branch in building Regional Transportation Assessments (RTAs) for each region of the country.

After identifying the baseline of key trade infrastructure assets, attention turns to the selection and sequencing of projects which have the greatest potential to improve the national network over the long-term. This assessment can begin this process by assembling a decades-long, infrastructure project list which extends beyond the shorter-term political cycle to serve as a comprehensive investment roadmap to guide national infrastructure investments. Best practice qualifies prospective projects on the basis of evidence-based proposals, qualifying them against criteria of national significance and demonstrating lasting value over the long-term. For example, the United Kingdom’s National Infrastructure Commission operates at arm’s length and employs a 30-year planning horizon and formally updates its national infrastructure plan every five years.

3. Include Criteria of National Significance

Like the national infrastructure plans of our competitors, this assessment will be challenged by the need to choose among a vast array of competing priorities with stakeholders lobbying on behalf of their respective infrastructure needs. To determine the relative priority of projects, other jurisdictions employ criteria to help separate out projects of national significance from those of local, regional or exclusively commercial benefit. Infrastructure Australia for example, has laid out in legislation what is considered to be nationally significant infrastructure by requiring projects to demonstrate a material improvement to national productivity.

Although these criteria are intended to separate out projects of national significance, leading jurisdictions emphasize widespread consultations to incorporate regional considerations and strategic priorities where project size or per capita metrics criteria are insufficient. For example, this might apply in the case of Canada’s northern territories. The forthcoming CWF report suggests guidelines for what would constitute Canadian criteria of national significance after having considered examples from leading jurisdictions and Canada’s past corridor and gateway projects.

4. Institutionalize Independent Infrastructure Advice: A Role for the Private Sector

The days of thinking about trade infrastructure planning and decision-making as the exclusive purview of government has long since passed. Competing jurisdictions, most notably the U.K. and Australia, credit significant advances in their own national infrastructure plans to permanent, institutionalized capacity which leverages industry expertise to fill intelligence gaps and augment government policy experience and regulatory oversight. This is particularly critical for trade infrastructure where, unlike schools or hospitals, the private sector has unique insights as a major funder, owner, operator and user of the assets. The full array of what this would constitute is in the forthcoming CWF report but includes: the most current front-line intelligence; proprietary supply chain expertise; construction innovation and cost management; and business requirements.

Best practices from countries with well-established national infrastructure plans include regular infrastructure audits against the criteria that they use to approve projects as a means of assessing the progress and to determine if outcomes have been achieved. In addition to evaluating previously approved trade infrastructure projects, these assessments afford the opportunity to anticipate future updates for the longer-term. For example, on updating priorities, in the proposed new U.S. Infrastructure plan, Transportation Secretary Pete Buttigieg announced alternative fuel corridor designations as part of the Biden administration’s plan to modernize electrical vehicle charging station infrastructure.The Federal Highway Administration’s “alternative fuel corridors” recognize highway segments that have infrastructure or plans for infrastructure that support alternative fuel options. To date, this next generation of U.S. corridors encompass roads in 27 states along 134 interstates and 125 highways and state roads totalling 166,000 miles of the US National Highway system.

While likely out of scope for the proposed National Infrastructure Assessment, historically, infrastructure planning in Canada has relied heavily upon extrapolating past trends forward using industry production levels or railway volumes, for example as a basis for predicting future infrastructure demand. While still an important source of intelligence, today, competing countries are employing more sophisticated methodologies like strategic foresight which employs new forecasting tools to understand and plan for plausible future outcomes.

In Canada, new tools are also available to better inform infrastructure planning and investment choices. For example, the Canada West Foundation has undertaken predictive modelling of new trade agreements such as the Comprehensive and Progressive Agreement for Trans-Pacific Trade (CPTPP) at a level of granularity that allows anticipated trade activity under trade agreements to be superimposed on the specific trade corridors of Canada’s supply chain by transportation mode. That information will be available in Q3 or Q4 of 2021 for use in the National Assessment.

A plan for Canada to build back better in a post-COVID world starts with trade infrastructure.

Putting a higher priority on trade infrastructure, with funding to match its importance, will support the transition to Canada’s economic future – and, crucially, help fund those upgrades and other essential infrastructure priorities. Doing so will provide long-term benefits for all Canadians in terms of jobs, a robust economy and cleaner, more inclusive communities.