The dialogue concludes this week in Winnipeg, Man. with a national symposium attended by stakeholders from across the country. From there, the government will use the input to craft an “approach focused on how the federal government can work with the provinces and territories to create the affordable energy and innovative jobs Canadians want.” There are two primary things the government should keep in mind as it develops this approach.

First, the approach should focus on outcomes while refraining from prescribing how to achieve these outcomes. The future is inherently uncertain. We do not know what type or to what degree certain energy technologies will play a role in it, but we do know the characteristics we want in the energy of the future. The submissions to Generation Energy so far describe a future where energy is sustainable, affordable and reliable. Policy should focus on ensuring our energy demonstrates these characteristics without picking winners based on today’s technology. It should encourage innovative technologies and solutions to help us achieve our desired energy future faster and at lower cost.

Second, the approach should help Canadians work together to achieve our energy future. When it comes to energy, the provinces have often taken a “go it alone” approach for much too long, while the challenges of addressing climate change effectively and increasing prosperity in a competitive global context are big. Achieving a cleaner future and economic growth will require the talent, investment and willingness of Canadians in every province. The provinces need to recognize that we are all in this together. Policy should encourage co-operation between the provinces to help Canada achieve its energy and economic goals together.

Canada’s energy future is about the quality of its energy

Governments, corporations and other organizations around the world spend millions forecasting energy trends and few are ever right over the long-term, especially when it comes to predicting fundamental shifts driven by innovation and technological change. For example, current predictions of peak oil demand by multinational oil companies, the International Energy Agency and others vary greatly, with some saying it will happen within the next 10 years to others saying it will not happen in the foreseeable future. Virtually no one forecast the boom in shale gas production enabled by hydraulic fracturing. Nearly no one correctly foresaw the rapid and steep price declines of solar and wind technologies until they were already occurring. There is a good chance no one is predicting the next innovation that will disrupt the way we produce and consume energy.

Canada’s energy policy should embrace the reality that the future is unknown. We do not know how much energy we will use in the future, how much solar and wind we will need, or how much oil and gas world markets will demand. It could be a little, or it could be a lot. For this reason, Canada’s energy future should not be defined by how much of certain types of energy we will need or how little other types of energy will need to be relied upon. Instead, it should be defined by the characteristics of the energy we will consume. When we envision Canada’s energy future, it should not necessarily be solar or wind or nuclear or oil and gas. It should be sustainable, reliable and affordable.

Policy that prefers sustainable, reliable, and affordable energy – as opposed to specific technologies and solutions – will ensure Canada drives the energy innovations that will define the future. It will allow Canada to capitalize fully on new and emerging clean technologies. Many of these innovations are happening now, but many more will happen in the future. Human ingenuity should never be discounted, and our policy should be ready for anything innovators can throw at it.

Canada’s energy future will require us to work together

Canada has enormous amounts of natural resources including the third-largest supply of proven oil reserves in the world, the fourth-largest supply of uranium, and nearly 80 per cent of Canada’s electricity supply is already carbon free. These endowments are distributed uniquely across the country. Carbon-free electricity sources like hydroelectricity have primarily been developed in British Columbia, Manitoba, Quebec and Newfoundland. Canada’s oil reserves (which were first developed in Ontario) are now concentrated in Alberta, Saskatchewan, and off the coast of Newfoundland and Labrador. Alberta and Saskatchewan also have some of the best wind and solar potential in the country. As Canada works towards its energy future, the provinces will need to work together to capitalize on these resources for the benefit of all Canadians today and into the future.

Working together will allow Canada to meet its climate goals and capitalize on its energy resources in the most beneficial way possible. For example, in the West, British Columbia and Manitoba’s hydroelectric resources are a natural complement to Alberta and Saskatchewan’s solar and wind resources. A more integrated grid would allow the West to decarbonize its electricity sector in a more cost-effective manner than each province going forward on its own. But an integrated grid will not be created if the provinces do not work together to figure out how to fairly and equitably share the resulting benefits. 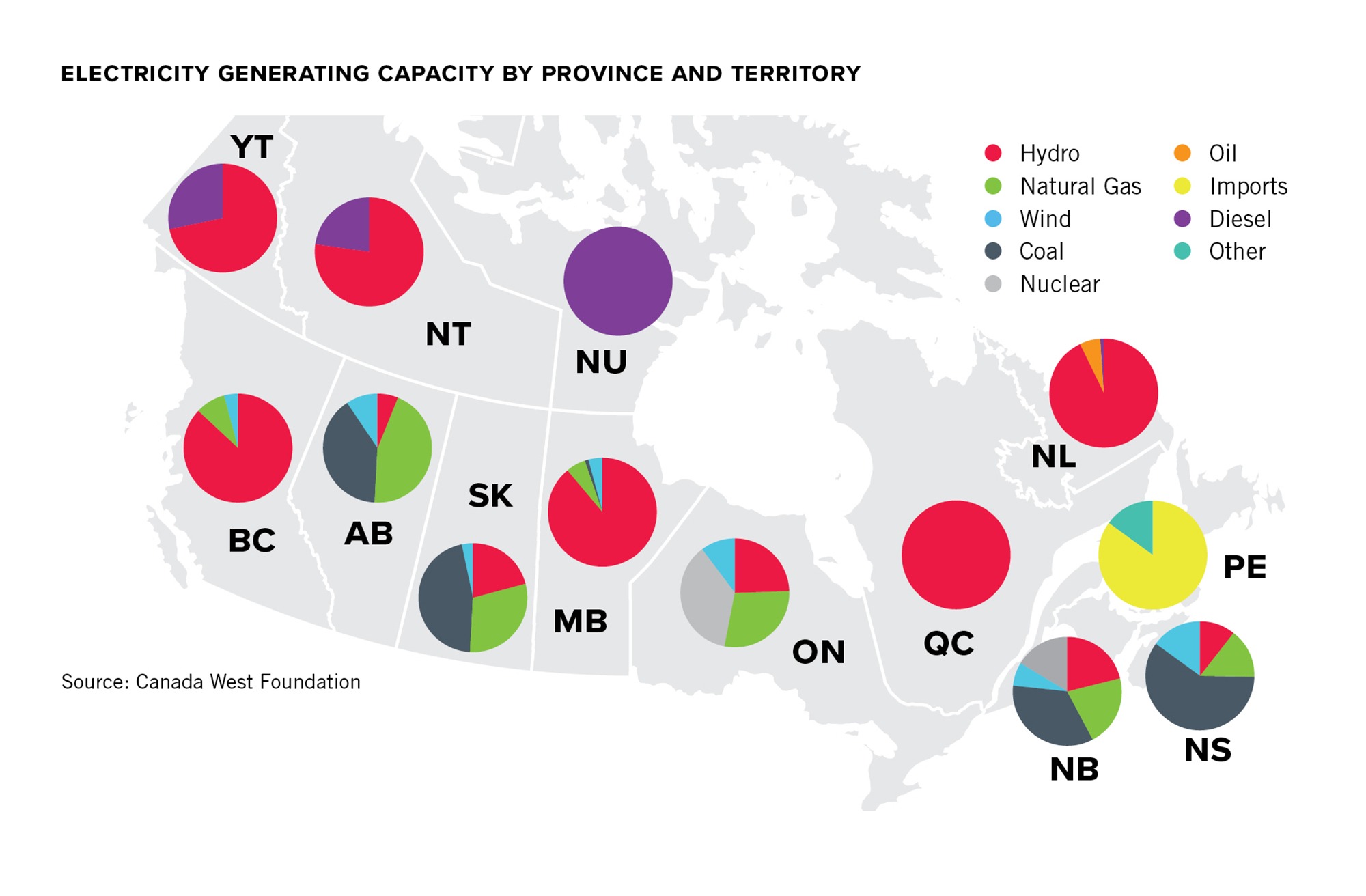 Canada’s natural resources are abundant, but unevenly distributed across the provinces. With electricity resources, some provinces have significant hydroelectric resources, while others rely on carbon intensive sources like coal which are being phased out yet have significant solar and/or wind potential. Inter-provincial cooperation can help fully capitalize on these resources.

The same can be said about oil and gas. The majority of these fossil fuel resources are land-locked within Alberta and Saskatchewan. Increasingly, these provinces are looking to their neighbours to get these resources to market. The extraction and production of these resources represent livelihoods and prosperity for millions of Canadians, yet for many others it represents the opposite of climate action. Yet, reducing the supply of Canadian oil will not have an appreciable impact on the global combustion of this fuel. The planet is awash in oil resources and if Canada does not produce it, another country will gladly supply the oil the world market demands and enjoy the economic benefits.

The provinces should work together to decrease their domestic demand for oil, but at the same time they should work together to reap as many benefits from Canada’s oil and gas resources as possible. Canada is a leader in producing these resources in the most environmentally sound way possible – Canadian companies have shown their willingness to step up to the challenge with their support for climate policies. Other countries cannot say the same thing.

The federal government can help to keep the national interest in the forefront of ongoing discussion and development and ensure other policies do not hinder inter-provincial co-operation. Natural Resources Canada is already undertaking steps to fill information gaps that fall between the cracks of individual provincial interests. The Regional Electricity Cooperation and Strategic Infrastructure Initiative (RECSI) is exploring the costs and benefits of electricity infrastructure projects to reduce greenhouse gas emissions including increased inter-ties and electricity trading between provinces. The government is also revisiting how it regulates interprovincial infrastructure like pipelines and transmission lines. A reformed regulatory structure needs to align with an energy future that allows for innovation in the oil and gas sector.

Moving towards the future

As Generation Energy comes to a conclusion, the government will begin to take stock of what it has heard and learned from Canadians across the country. It is safe to say Canadians across the board want clean, affordable and reliable energy. Now the government will have to reflect what it has heard into the policy it creates. This policy will determine whether and how costly we achieve the energy future Canadians demand. By aligning policy with outcomes rather than specific prescriptive solutions and helping the provinces to collaborate and work together, Canada will be able to move towards a bright energy future.