One of the pillars of Canada’s – and more specifically, Western Canada’s – relationship with China is trade.

China is the second largest export market for all four Western provinces. Of course, our trade with China also includes things we import, as well as trade in services and investment. Taken together, Western Canada’s total trade with China in 2017 (imports and exports) was worth an astounding $32 billion.

What, exactly, does Canada’s West trade with China? How important is Chinese trade to each Western province’s economy? Let’s break it down:

Due to its commodity mix, British Columbia trades more with China than each of the Prairie provinces. B.C. exports $6.67 billion.[i] Some of this is re-exports – goods from China to another destination, only stopping in a B.C. port – but how much that is, is difficult to tell in the data. The province’s trade with China has skyrocketed in the last decade, rising 240 per cent. This is a result of surging exports of wood pulp, lumber, and coal, among other products. British Columbia has many key raw materials in demand from China.

While the total exports from Saskatchewan are much smaller – $3.5 billion – the amount it exports to China has grown the fastest of all the Western provinces, at 270 per cent. This is largely due to rising export of canola, chemical fertilizer, and vegetables, among others. Manitoba’s export rate has risen substantially in the last decade as well, 125 per cent, exporting $1.41 billion in 2017.

While Alberta exports nearly $4 billion to China, its export rate has increased only slightly in the last decade, at 25 per cent. 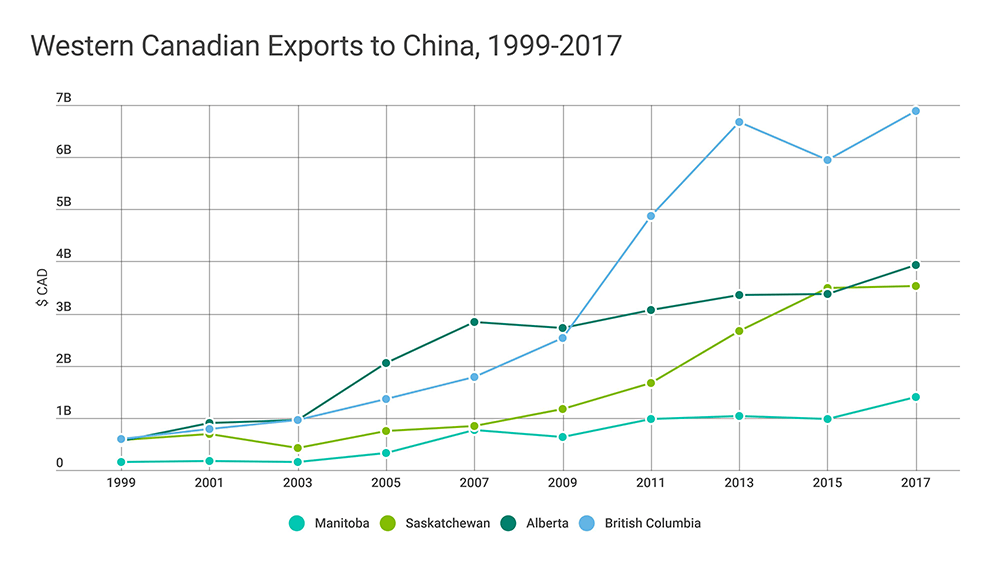 Trading Partners – Where does China rank?

China is the second largest export market for each of the Western provinces; however, the actual amount of goods exported to China by each varies widely.

Canada imports billions of products from China every year ­– but while China is our second largest trading partner, the reverse is certainly not true. Canada hardly registers on China’s trade radar, with Canada not cracking the top 25 trade partners.

Niches in the Chinese Market

The West has several products that it sells to China in large numbers. While not an exhaustive list, these four products illustrate why the Chinese market is so important to the Western provinces.

(1) Metals
Metals are exported to China primarily from B.C., but also from Alberta and Manitoba. In 2017, B.C. exported more than $860 million in metals to China: this includes copper, zinc, and other precious metals. These metals come from mines across B.C., including Highland Valley Copper and Gibraltar. Alberta exports nickel – a little over $89 million in 2017 – and Manitoba exports nickel, $190 million worth, to China.

This all goes to China because they are processed there, and go into a whole host of products, such as electronics.

(2) Soy
Soy is grown across the Prairies, but in fairly small amounts. Manitoba grows the most, and as such, exports the most to China – in 2017, approximately $391 million worth. Saskatchewan exported nearly $195 million, and Alberta exported about $31 million.

China is the largest importer of soy in the world by far – largely to feed its massive population, and in animal feed. The growing China-U.S. trade dispute is going to impact soybean growers, in the U.S. but also in Canada.

(3) Canola
Canada produces a lot of canola – as a crop that was specifically designed in Canada, we have a monopoly on global production. China imports most of the canola we export to feed its enormous population. In 2017, Alberta exported $1.29 billion worth of canola to China, Saskatchewan exported $1.66 billion, and Manitoba exported close to $350 million.

Canada certainly depends on China to take its canola crops. This reliance can lead to problems – like the canola dispute between the two countries in 2016.

(4) Wood pulp and Lumber
In the West, British Columbia dominates lumber and wood pulp exports to China, exporting $3.6 billion to China in 2017; Alberta also exported a sizeable amount, about $530 million in 2017.  Most of what China imports from Canada is chemical wood pulp, which is pulped woodchips, combined with chemicals, to be used in processed products (such as paper). Canada is the third largest exporter of wood and wood pulp to China in the world (behind the USA and New Zealand, respectively).[ii] In the last decade, China overtook Japan as the second largest customer for B.C. softwood lumber.

Trade with China is equally important for the West on the import side – the Western provinces get many goods that are not typically manufactured in Canada, from China. In 2017, China exported $16.5 billion worth of goods to Western Canada.

British Columbia imports an astounding amount from China – in 2017, this was $11.87 billion. However, it is likely that much of this was re-imported (only making a stop in B.C. before reaching its destination elsewhere in Canada). Alberta imported a little over $3 billion in 2017; Manitoba imported $1.2 billion, and Saskatchewan imported $378 million.

Consumer electronics are widely imported by the western provinces from China. In 2017, both British Columbia’s and Manitoba’s largest import category from China was laptops; they imported $386 million and $50.7 million, respectively. Saskatchewan’s largest import category from China in 2017 was “structures of iron and steel,” costing nearly $32 million. Alberta spent the most on materials for oil and gas drilling, spending about $111 million in 2017.

When we think of trade, we typically think only of goods; however, a main component of trade is trade in services, and tourism is a big part of this. The federal government declared 2018 the Canada-China Year of Tourism, largely because of the huge growth in Chinese tourism in Canada in the last few years. Canada was the second most popular destination for Chinese tourists in 2017 (tying with Australia). In 2016, 601,300 Chinese people visited Canada, contributing $1.25 billion to our economy – an increase of 24% from 2015. In 2017, an estimated 740,000 Chinese visited Canada, a 23% increase.

We know that tourism is important across the West, particularly for Alberta and British Columbia.  From January to July 2016, more than 2200 tourists flew into Calgary from China, and more than 130,000 tourists from China flew into Vancouver. Two of the most popular Chinese tourist destinations are Vancouver and the Rocky Mountains.

– Sarah Pittman is a policy analyst at the Canada West Foundation

[i] Unless otherwise noted, all data comes from the Government of Canada’s “Trade Data Online” database, https://www.ic.gc.ca/app/scr/tdst/tdo/crtr.html.