By Carlo Dade and John Law

Canada is missing trade opportunities because international perception of the reliability and competitiveness of Canada’s trade and logistics infrastructure is declining at the same time that new trade agreements are placing greater demands on the system. Short-term fixes focused on current problems bring some near-term improvements and political relief, but they do not fix the problems that have caused Canada’s trade infrastructure decline.

The government must improve and make permanent the temporary initiatives that have proven effective. This involves efforts to:

> Model the trade infrastructure impact of the Comprehensive and Progressive Agreement for Trans-Pacific Partnership (CPTPP), and all future trade agreements

> Go beyond playing catch up on trade infrastructure and move to true, long-term, proactive planning

> Broaden data and analysis to include planning for infrastructure for trade in services.

Increased demand for Canada’s exports will come primarily from two factors: (i) rise in overall demand for goods that Canada exports stemming from the rise of the Global Middle Class, and (ii) opportunities in new trade agreements.

An important reason for the rise in overall demand for commodities is growth of the Global Middle Class (GMC). The rise in demand for commodities driven by the GMC population’s rapid growth to 1.8 billion in the early 2000s was enough to wipe out a century-long decline in real commodity prices.¹ In the coming decades that growth will double, or even triple. The rate of growth of the GMC is faster than the rate of increase for the global population in general. 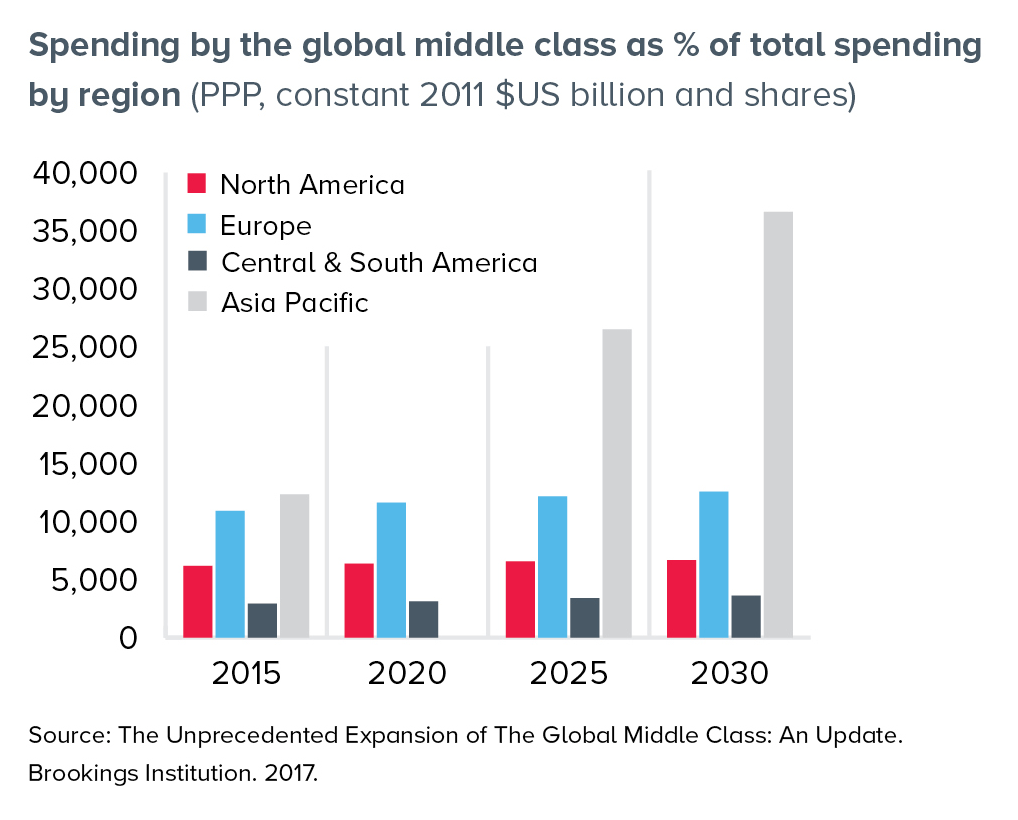 In addition to increased demand from global population growth, Canada will see shifts in the direction of demand due to increases and changes in trade caused by its new trade agreements. Modelling done by the Canada West Foundation shows expected increases in trade from the 11-member CPTPP, which Canada ratified in December 2018. Government of Canada forecasts are higher. If, as expected, the CPTPP agreement gains new members, it’s set to have even more impact on Canada’s trade infrastructure. 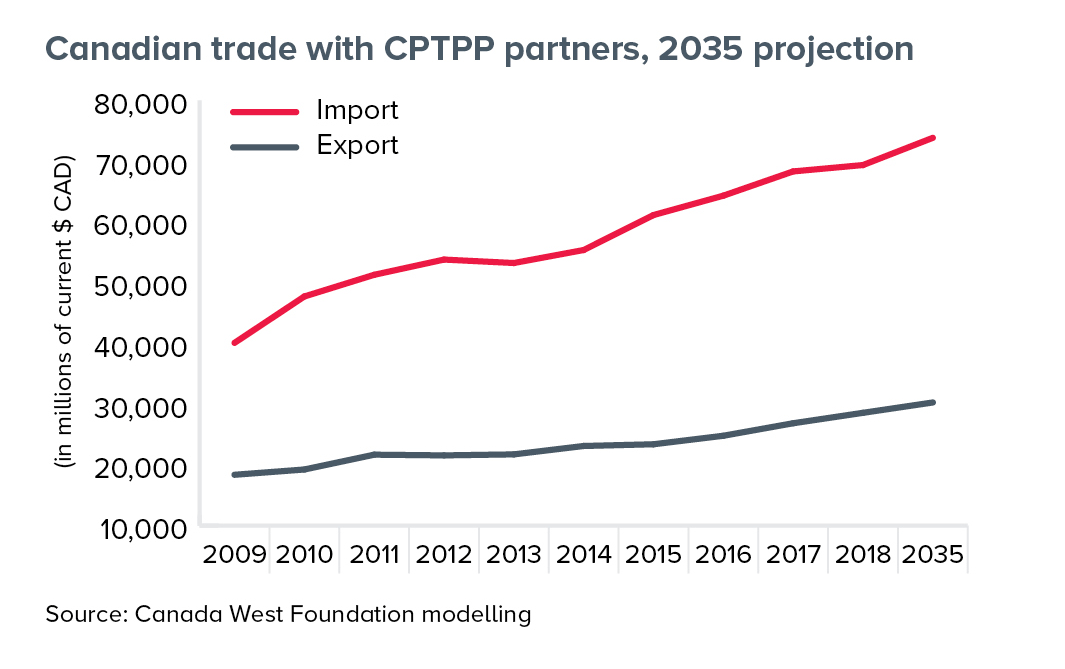 According to Transport Canada, the country’s trade transportation system moves $1 trillion worth of goods annually (of which $525 billion are exports), supports more than 1 million jobs and contributes nearly 10% of Canada’s Gross Domestic Product.² Canada’s trade and logistics system will feel the pressure of the increased demand. Transport Canada estimates a two to three per cent rise in demand per year for transportation services in Canada. But thanks to our recent trade agreements, demand will not only grow, it will also shift direction as exporters and importers respond to tariff changes and other incentives in markets tied to trade agreements. This will mean shifts in volume and direction of trade within Canada as well as shifts in volume and direction of foreign trade including to and from the U.S.

A first attempt to model the impact of trade agreements on Canada’s infrastructure examined projected impacts of the Canada-European Union Comprehensive and Economic Trade Agreement (CETA) and found:

“Demand for ports of clearance that are located on the east coast of Canada is estimated to increase following the trade agreement with the EU. For example, annual tonnage of exports from the port of Montreal is expected to increase by 2.3% by rail and 3.2% by truck. Volume of exports through the ports of Vancouver, Hawkesbury, and Sept-Iles are estimated to decline by 1.1, 0.4, and 0.3 million annual tonnes, respectively.”³

While demand is increasing, international perception of the effectiveness of our trade and logistics infrastructure is declining

Surveys of customer and user perception of quality, dependability and reliability of trade infrastructure are important drivers of business decisions on where to invest and from whom to buy. Perception of dependability, reliability and the cost of their absence also factor into decisions on whether tariff reductions move trade. These are not quantitative assessments, but they are arguably more important as an easily and universally understood signal of competitiveness.

In the early 2000s, Canada made significant investments in the National Policy Framework for Strategic Gateways and Trade Corridors, which included the Asia-Pacific Gateway and Corridor Initiative, the Gateways and Border Crossings Fund Program, and a rebuild of the National Highway System (NHS). As a result, by 2008-09, Canada was ranked as having the tenth-best trade infrastructure* in the world by the World Economic Forum (WEF) in its annual survey of economic competitiveness. Today it ranks 32nd.** 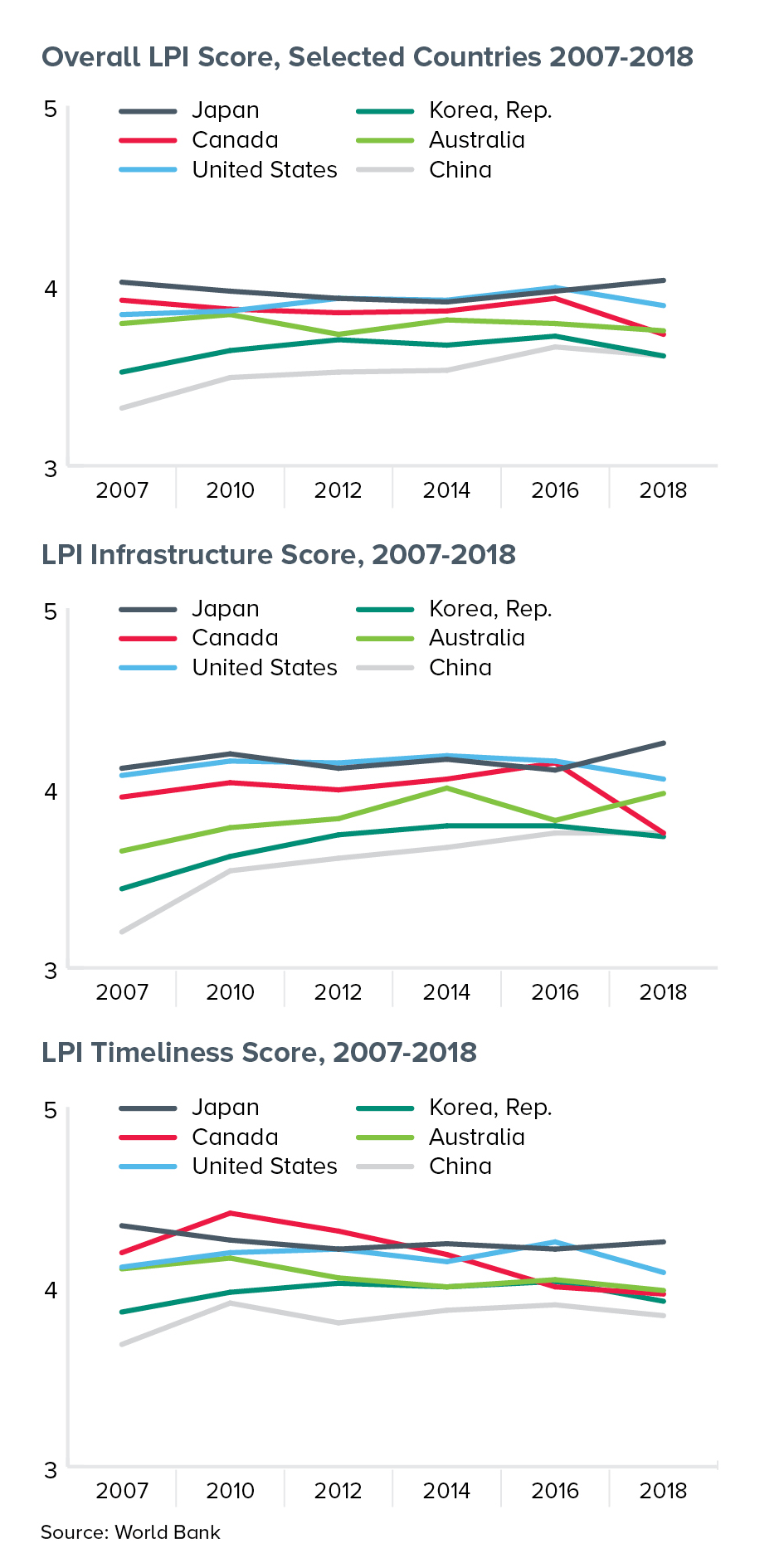 What needs to be done?

We know that Canada’s trade opportunities will increase, and we know that the measures of confidence in our trade infrastructure have been declining. The obvious solution is to devote resources to fix the problem. This is being done through the federal government’s National Trade Corridors Fund and supply chain visibility projects. But these efforts fall short of what is needed. Canada should also take several additional measures:

> The detailed freight flow forecasting model developed for CETA needs to be continually refined. This is especially true as new data sources emerge such as the Canadian Freight Analysis Framework (CFAF). It also needs to become a standard tool in the preparation of future trade agreements including the ascension of countries to the CPTPP agreement.

> The existing government national trade corridors initiatives need to transform from largely political acts to become permanent institutionalized instruments of Canada’s trade competitiveness. The revival of the gateways and corridors strategy is not permanent. It is therefore setting the country up for a repeat of Canada’s short-lived rise in international trade infrastructure rankings during the government-led Asia-Pacific Gateway programs from 2005 to 2008, and subsequent fall once these programs ended. The ending of the initiatives also led to a loss of knowledge and institutional memory within the government, which now needs to be rebuilt. This is more than counterproductive. It causes reputational damage as foreign customers question whether improvements in and quality of infrastructure are secure in a country that does appear to be capable of long-term focus and seriousness.

> Canada must stop playing catch-up on trade infrastructure and move to true, long-term advance planning. Our competitors like Infrastructure Australia have adopted forward-looking and future-oriented planning. Their longterm pipeline of projects provides an ability to plan two decades out, provides confidence to its trade partners and signals seriousness to investors. While the federal government-supported supply chain visibility projects are a good start to try and anticipate demand, they are still after-the-fact analytics done after major trade agreements have been ratified and come into effect; hence, Canada continues to play catch up instead of truly planning in advance. This points to the critical need for more proactive analysis – done before trade agreement ratification – of the type that the federal government did for the CETA agreement and which CWF is doing for the CPTPP.

> This work needs to be broadened to include analysis and planning for trade infrastructure tied to trade in services such as movement of people and telecommunications. Some of the most significant potential comparative advantages for Canada in the CPTPP and CETA agreements lie in services and new liberalization of temporary entry for business persons and credential recognition. Canadian firms now have significant advantages over American competitors in these sectors. Realizing these advantages requires data and planning capacity that is not yet available. It needs to be a priority.

Canada’s trade opportunities are increasing and so too is demand on our trade infrastructure, at the same time that perceptions of the reliability and competitiveness of Canada’s trade and logistics infrastructure are taking a beating. There are a number of measures that Canada can take to ensure that businesses of all sizes are able to take advantage of opportunities in new markets. But it will require the federal government to take a thoughtful, proactive and long-term approach.

? The LPI is an interactive benchmarking tool created to help countries identify the challenges and opportunities they face in their performance on trade logistics and what they can do to improve their performance.