Any farmer in Western Canada can tell you that China’s decision in March to cut off imports of Canada’s canola is alarming.

Canola is a major part of the agriculture industry: In 2018, Canada exported nearly $12 billion worth of canola – about 1.5 times the amount of seafood exported in the same time period.

The Prairies, which produce almost all of Canada’s canola, are particularly exposed. In 2018, Canada sold nearly $4 billion worth of canola seed and oil to China alone.

But beyond the threat to the industry – which delivers $26.7 billion in jobs, spending and other economic impacts to the Canadian economy – there are implications, both political and economic, for the overall Canada-China relationship.

China is Canada’s second-largest trading partner, after the United States, and the volume of trade is growing. A deteriorating economic relationship carries risk for all of Canada.

There is no silver bullet to end the canola dispute, or solve Canada’s broader economic and political vulnerability when it comes to China.

However, Canada has a handful of practical steps it can take. These include trying to get China to engage on a non-tariff barrier agreement for the agricultural sector; diversification of countries where Canada sells canola; diversification of the canola products sold, which would have the added benefit of creating more jobs and economic growth here; and a longterm China strategy. Each has its own challenges, but may create more stability for Canada’s canola industry right away, and provide a path to improve the Canada-China economic relationship in the future.

Why is canola so important?

Canola is a Prairie-made economic powerhouse. There are 43,000 farmers in Canada who grow canola; close to 99 per cent of canola is grown in Alberta, Saskatchewan, and Manitoba. In 2017, canola contributed $10 billion in total crop cash receipts – 28 per cent of the Canadian total and 45 per cent of the Prairie total, far more than any other crop.1  It also accounted for more than a quarter of a million direct, indirect and induced Canadian jobs.2

Farmers do not exclusively grow one kind of crop, but rotate through a few different crops based primarily on disease control, as well as a few other factors. Decisions about what will be seeded in a given crop season are often made months in advance. Canola is popular on many Prairie farmers’ crop rotation circuits. It’s particularly known for its profitability, as well as its ability to help with long-term weed control.

When considering policy solutions, it is important to keep in mind that (a) the China-Canada dispute affects virtually every crop farmer in the Prairies, and many outside it, and (b) while a farmer could perhaps avoid planting it this year, it is essential to crop rotations, so avoiding planting it in the future would be economically challenging.

Why is canola so vulnerable?

Canadian canola relies heavily on the Chinese market – farmers here export to only a handful of other countries, including the U.S., Japan and Mexico – and this leaves it vulnerable.

China has capitalized on this vulnerability multiple times in the recent past, and used its significant purchasing power to manipulate Canadian canola sales for specific purposes.

In 2009, unsubstantiated Chinese concerns about blackleg – a disease affecting canola crops – provided an excuse for China to impose new rules limiting the processing plants that could purchase Canadian canola, severely limiting demand for Canadian canola seed.3 At that time, China had a surplus of canola, and didn’t need to import as much as usual. 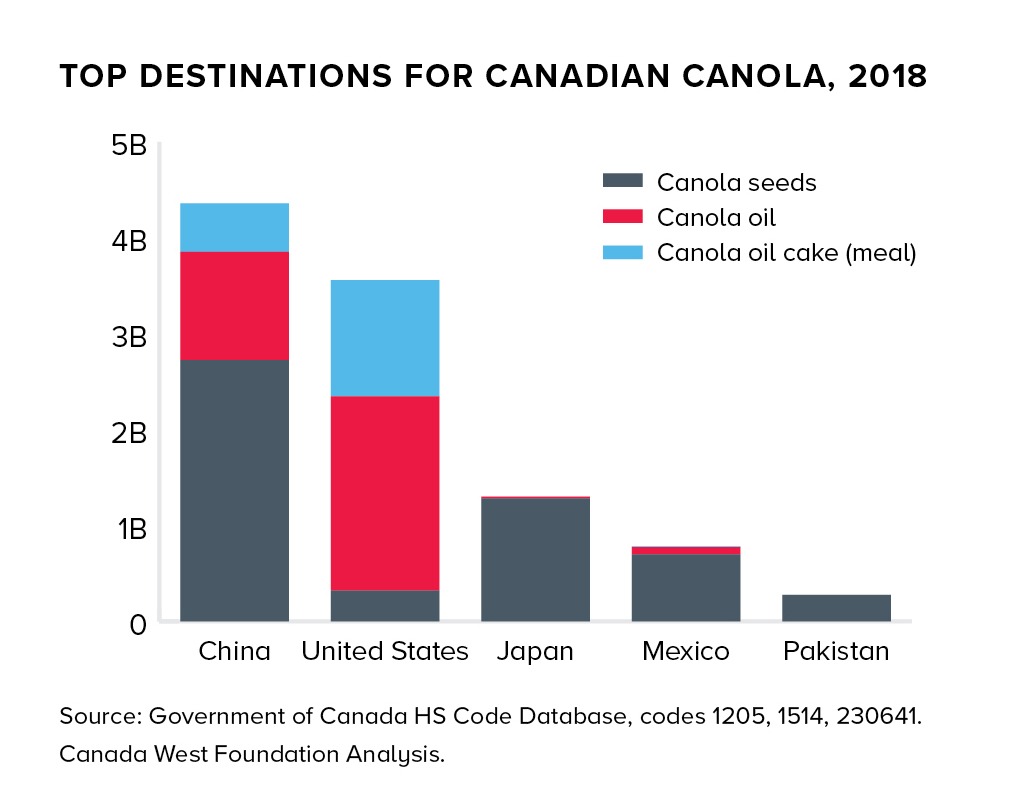 In 2016, China once again professed concerns about blackleg. This time the excuse was that there were concerns about blackleg being transmitted through dockage (organic things in canola that aren’t canola, like weeds) that was allowed in canola exports from Canada. China threatened to cut dockage to 1 per cent from 2.5 per cent – a move which would significantly have limited the canola that Canada could ship. (Processing out that much dockage is very difficult, and goes far beyond international norms.)

In each previous dispute, Canada and China signed a Memorandum of Understanding (MOU) to ensure Canadian canola exporters continued access to China. The most recent one, signed in 2016, was meant to ensure access until 2020.

Clearly, with Canadian canola exports all but cut off this spring, things have changed.

Political tensions between Canada and China have been simmering for months since Canadian officials arrested Huawei CFO Meng Wanzhou upon request of American officials. Meng has to face an extradition trial in Canada, which may result in her deportation to the United States. China has exerted significant political pressure on Canada because of this, as it has in trying to get Canada to allow Huawei to be part of building Canada’s 5G network.

So far, the pressure has largely been in the political and humanitarian realm. If the canola ban has to do with Meng, or Huawei generally, it would be the first real economic fallout Canada has suffered because of it. Because extradition hearings can take months or years, this could have serious economic implications – and waiting for it to “blow over” is likely not a good option.

What can we do about it?

Unfortunately, there is no silver bullet to the problem of Canada’s canola vulnerability. However, Canada has some practical options to try to end the latest canola crisis.

The Government of Canada has already announced its intentions to send a technical delegation to China to discuss the Chinese claim of pests in Canadian canola. There is an assumption in Canada that the canola issue has a lot more do to with wider political circumstances than with any actual problems with the canola, particularly because the Canadian Food Inspection Agency (CFIA) has repeatedly tested Canada’s canola and found no pests.4 However, the broader political issues cannot be dealt with if the scientific concerns are not put to rest. The trouble with this strategy is that it relies on Chinese co-operation. And so far, China has not approved the Canadian delegation.5

One thing Canada can do almost right away is to engage China more comprehensively on non-tariff barrier issues that hinder agricultural trade. Non-tariff barriers – obstacles to trade that are not tariffs – can include such things as delays at the border or different health and safety standards. If Canada had a non-tariff barrier agreement with China in place right now, and the question of pests in Canadian canola came up, there would be a protocol in place on how to resolve the issue and let trade flow unhindered again. This does not guarantee that it would work but it is better than what we have now. This does not require a full-blown trade agreement with China, and it can help with secure market access and predictability.6

Given the current chill in the relationship between Canada and China, it would be difficult (but perhaps not impossible) to get China to negotiate an agreement, although at least one senior Chinese embassy official in Canada has indicated to CWF that the Chinese government is, at least, open to the idea of engagement. Notably, Canada has also signed agreements with China in the past meant to stabilize Canadian canola exports to China – namely, the MOUs signed in 2012 and 2016 – that have not lasted as long as intended, and in fact seemed to only remain in place as long as the Chinese government found it convenient to leave it in place.

One standard way to avoid depending too much on one market is to diversify to other countries; however, this is more challenging for canola than it may be for other commodities. China is the world’s largest country and the world’s largest consumer of vegetable oil7  – if Canada wants to continue sell vast quantities of canola, it will be extremely difficult, if at all possible, to be able to get substantially away from China.

Canada sells a lot of canola, but only sells significant amounts to a few countries. For all these countries but two – the United States and China – the export levels have not risen much since 2000. That doesn’t mean that there isn’t more room for canola in these markets, but it would likely mean displacing something else, which is more difficult to do than simply meeting demand for your product. 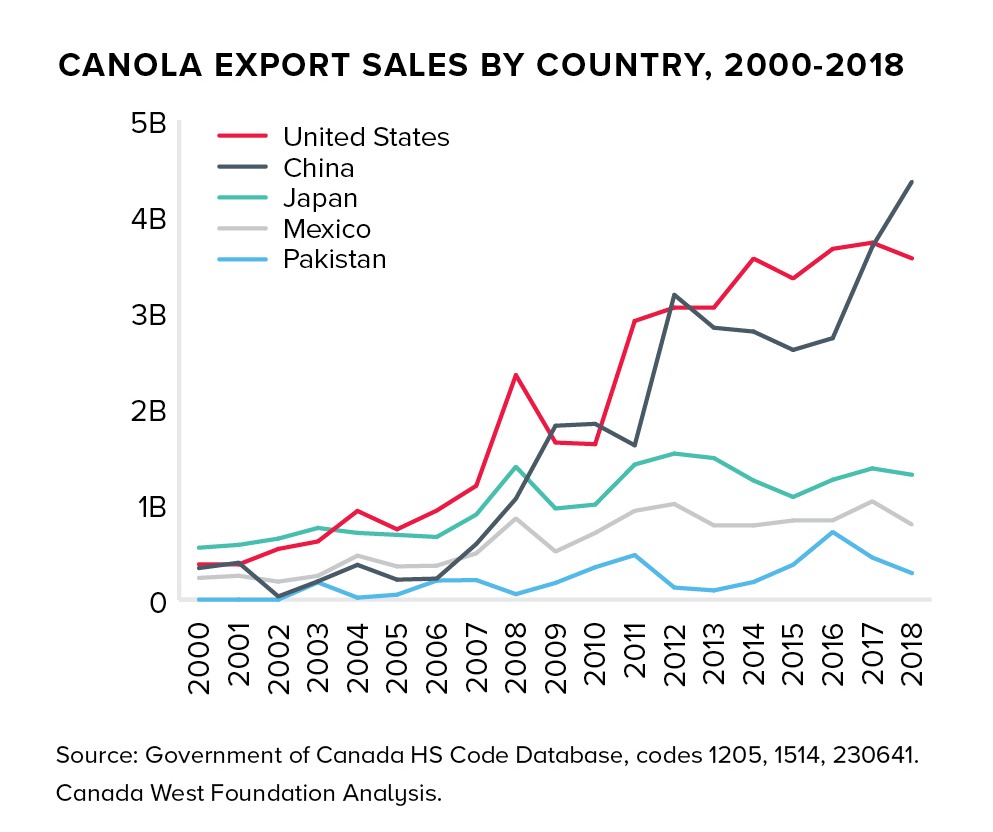 For simple diversification, then, there are three options: create new demand by creating new products or uses, sell more canola to the United States or sell to other countries that do not currently consume much canola. The United States is perhaps a more reliable trading partner for Canada than China, but ironically most of the effort in Canada to diversify is to move away from the United States, whom Canada relies upon for buying many of its exports. Selling to other countries is an option, but many of them may not have the ability to process canola seed and as such, it may not be attractive.

While Canada can continue to sell a lot of canola in its unprocessed, seed form, there may be more opportunities to sell canola to different markets in its processed form – canola oil and canola meal. Both products are quite useful, and countries that do not have the ability to process canola seed domestically may be more interested in these products. Currently, about 45 per cent of canola grown in Canada is processed here, and most of that is exported.8 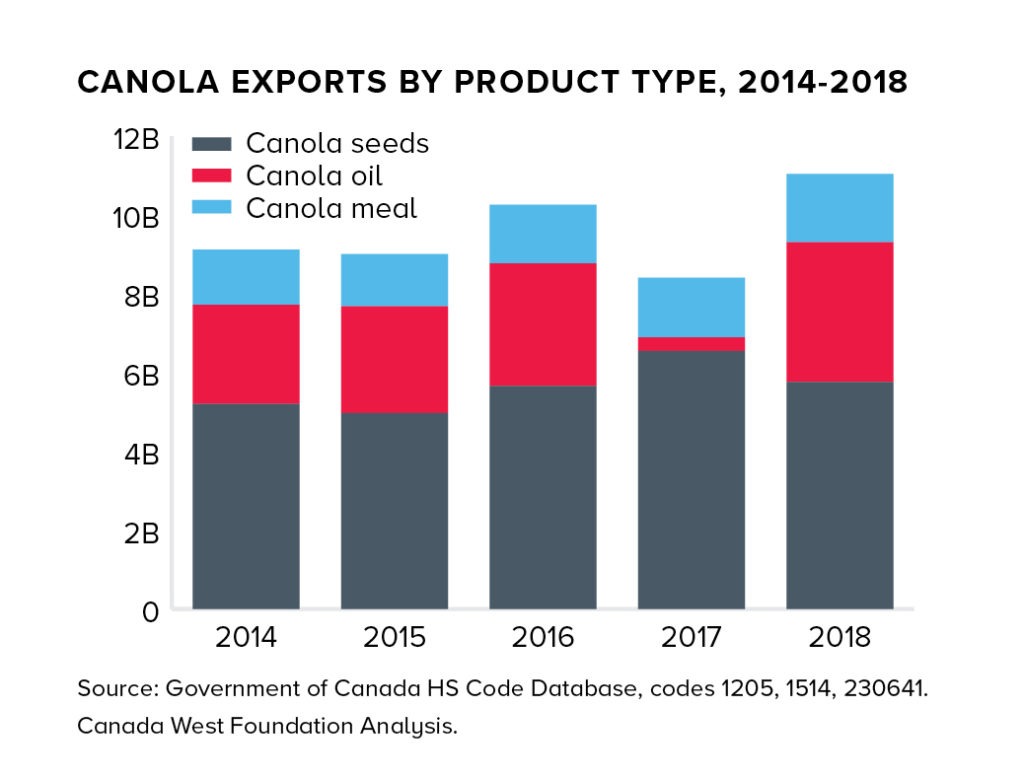 One of the added benefits of processing canola before selling it means more money and jobs are generated in Canada – specifically, the money and manpower that the processing plants require.

Canola meal is primarily used in animal feed. It is the second most widely used protein ingredient in feed after soybean meal9  and has a number of positive traits. For example, it is particularly useful in dairy feed: studies show that canola meal can increase milk production roughly one litre of milk, per cow, per day.10 Countries with significant amounts of dairy farming that Canada doesn’t currently export canola meal to – such as the United Kingdom or Ireland – could be targeted.

Canada has faced off with China on canola and other agricultural products more than once. Immediate relief for farmers is the priority, but the fact that the same problems keep repeating points to the need for a better long-term strategy.

If Canada is going to continue to sell a significant amount of goods to a country with China’s record of disruptions, then it’s critical to think through and prepare for all possible implications.

Any long-term strategy for China would have a few basic requirements: a clear idea of what Canada wants the relationship to look like; steps towards reaching that goal; and, crucially, plans and protocols in place to help guide the Canadian response when things go off the rails.

These policy options do not guarantee an overall solution. However, they do give Canada a chance to stabilize Canada’s canola industry, and in the process, will become more adept at managing the Canada-China relationship with security and prosperity both in mind.

? “How canola is processed,” Canola Council of Canada, https://www.canolacouncil.org/oil-and-meal/what-is-canola/howcanola- is-processed/.