Canada’s greenhouse gas emission targets are wrong – not because they are too tough or not tough enough, but because they are based on the wrong measurement. This has negative consequences for policy development and political discourse, which in turn means fewer reductions in global emissions and more local economic disruption.

It is important to measure emissions because you can’t manage what you don’t measure. But the approach adopted by the global community through the Paris Agreement is flawed. Canada, along with the rest of the world, tracks emissions with a territorial-based accounting approach that only counts emissions that occur within its own political boundaries.1 This choice encourages policies that reduce domestic emissions, but not necessarily global ones – the measurement that truly matters.

Nations can reduce territorial emissions – intentionally or not – by simply shifting them (and the economic activity associated with them) to other jurisdictions – a phenomenon known as “carbon leakage.” Instead of making goods domestically, a country can instead import them and add very little to its own carbon account while still consuming carbon-intensive goods. For export-oriented industries, constraining output will reduce the emissions associated with local production, but the global impact will be muted as other countries increase their output to pick up the slack.

Canadians want to address global climate change and they want to enjoy economic growth, but the way we judge our climate progress works against both goals. Canada needs a better way to measure its climate efforts – one that leads to better policy and better outcomes for the country and the world. Canada should also be encouraging other nations to do the same, in an effort to truly reduce global emissions rather than just shifting among jurisdictions.

Federal and provincial governments should adopt a consumption-based accounting approach as an alternative – or secondary – way to measure greenhouse gas emissions. Ultimately, consumption of goods and services drives emissions. As Canadians, we can and should make policies to encourage or discourage various kinds of energy embodied in our consumption. Having a better metric will help us make better policies.

LNG Canada – a $40 billion project to export liquefied natural gas (LNG) from the coast of British Columbia – represents a huge economic opportunity for the province and the country. Yet there are strong voices fighting against the project because of its impact on achieving local emission reduction targets.

For LNG Canada, the emissions associated with the increased production and liquefaction of natural gas will occur in British Columbia and count against provincial and national emission targets. The emissions from shipping the LNG will not be allocated to Canada (or any other country) since they will occur in international waters. 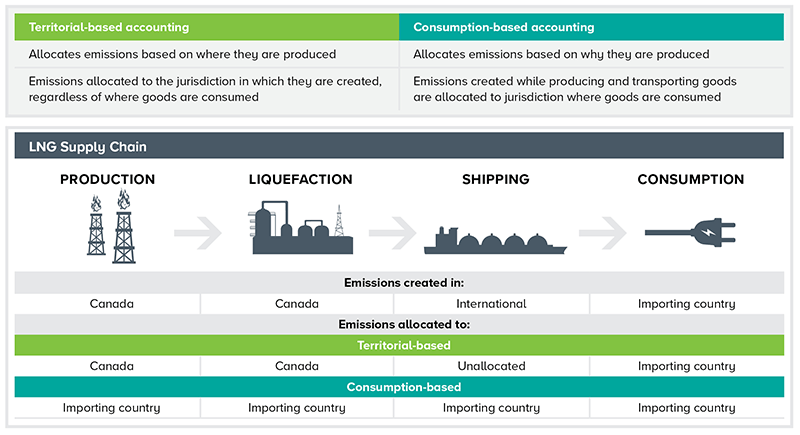 LNG Canada will be the most efficient LNG facility in the world, and British Columbia is implementing policies to reduce emissions from natural gas production; yet the export facility could still lead to an additional ten megatonnes of GHG emissions within British Columbia’s borders.2,3 British Columbia aims to reduce emissions to less than 13 megatonnes by 2050, which means up to 80 per cent of British Columbia’s 2050 emission target (and 7 per cent of the national emission target) will be consumed by LNG Canada alone. This leaves very little room under the target for emissions elsewhere in the economy – including more LNG development – even as global demand for natural gas grows.

Regardless of which choice you think is right, the impact on global emissions will be either negligible or worse, negative. The would-be buyers of Canadian LNG don’t want it because it’s from Canada, they want it because it’s LNG. If Canada does not provide it, other countries happily will, which means emissions will still be created to produce and liquefy natural gas – just not in British Columbia.4 In fact, since LNG Canada will be the most efficient plant in the world, blocking its development could increase global emissions if less carbon-efficient LNG takes it place.

Under the territorial approach, the only way British Columbia can benefit from its resource assets is by requiring the emission-intensity of future LNG projects (and associated natural gas production) to approach zero. While a worthwhile goal, it is constrained in a globally competitive marketplace. If the costs of reducing emission-intensity to levels in line with emission targets are too high, investors will choose to develop LNG projects in countries with less stringent standards – effectively blocking development in Canada with no benefit to global emissions.

In the end, British Columbia’s dilemma won’t reduce global emissions regardless of what it chooses. But it is sure to capture a lot of attention at a time when real solutions are needed.

A different way to count emissions

This means a consumption-based approach will shift emphasis from what we produce to what we consume. Canada is increasingly “importing” more and more carbon emissions. According to research by the University of Calgary’s School of Public Policy, Canada began importing more emissions than it exports in 2011 (the most recent year data is available).5 Policy-makers have largely ignored emissions associated with imports, but a consumption-based approach would place this sizeable contribution to climate change under emission targets and give us a metric that rewards importing less carbon-intensive goods. It would also incorporate emissions from international shipping. At the same time, it would place less pressure on exporting industries that are susceptible to carbon leakage. 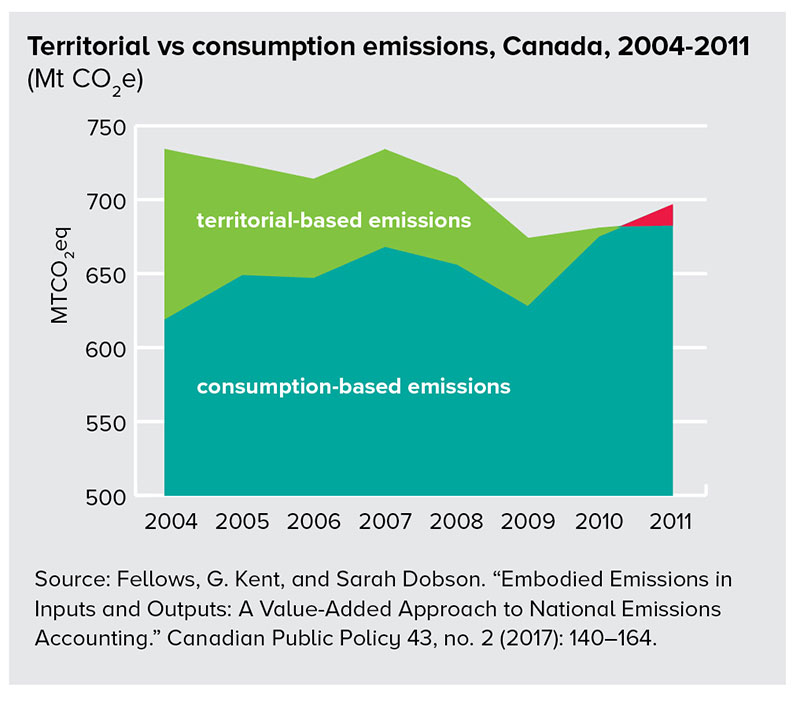 Most policy-makers are not oblivious to the climate counting problem. British Columbia’s government supports LNG Canada even though it will make achieving emission targets more difficult; the federal government’s carbon pricing plan includes mechanisms that reduce the incentive for trade-exposed sectors to send their emissions and economic activity elsewhere.6 Policy-makers recognize that it does not make sense to harm Canada economically in pursuit of deceptive emission reductions.

Yet the territorial-based accounting approach leaves policymakers to square-the-circle of increasing economically beneficial but carbon-intensive exports while simultaneously meeting domestic emission targets – not an easy thing to do. The fact is that developing these resources will likely mean Canada cannot hit its current targets as they currently stand – making a mockery of emission targets and repeatedly pitting climate action against the economic benefits of fulfilling global demand for Canada’s resources.

What is the point of meeting domestic emission targets, when meeting them won’t actually reduce global emissions?

There are reasons why territorial-based accounting is the conventional metric. It seems intuitive because it measures emissions that governments can directly regulate – though as this brief explains, this does not necessarily convert to global emission reductions. Territorial-based emission measurements are also much easier to calculate than a consumption-based approach. Consumption-based measurements require detailed data on trade flows and emissions in foreign jurisdictions – data that is often not available, not timely or of poor quality.

The flaws of territorial-based accounting are not ignored at the international level, and many have advocated for an alternative approach such as consumption-based accounting.7 Yet, there is little evidence of any political will to get the global community to transition to a better metric – partly due to the methodological complexity.

Canada should invest in further improving the capability to calculate consumption-based emissions measurements. Reducing the methodological complexities of this approach would help foster its adoption within the global community.

Ultimately, this approach would give greater meaning to Canada’s emissions targets. By measuring the emissions that we have the most influence over, actions to meet our targets will result in real global emission reductions instead of just shifting them to other countries – and avoid unnecessary economic disruptions or loss of economic opportunities in Canada.

1 Canada adheres to the 2006 IPCC Guidelines for National Greenhouse Gas Inventories, which states “national [emission] inventories include greenhouse gas emissions and removals taking place within national territory and offshore areas over which the country has jurisdiction.”

4 For example, the U.S. Energy Information Administration expects U.S. LNG export capacity to more than double by the end of 2019. See: https://www.eia.gov/ todayinenergy/detail.php?id=37732

6 This “output-based pricing system” (modeled after the one being implemented in Alberta), returns carbon tax revenues to trade-exposed industries as a function of output, which maintains the price signal for emission reductions but does not reward production cuts.