By Jade McLean and Marla Orenstein

The federal government is preparing to release details on its latest and potentially most ambitious climate policy yet – the Clean Fuel Standard (CFS).

The CFS is being implemented to help Canada meet its goal of a 30% reduction in GHG emissions by 2030. The government estimates that by 2030, the policy will reduce emissions by 30 megatonnes – or nearly 15% of its target of a 219 megatonne reduction.

We support the intentions of the CFS; reducing global greenhouse gas (GHG) emissions is critical. At the same time, we have seen the federal government struggle to get Canadians onboard with other environmental legislation, such as the carbon tax and Bill C-69. Clearly, the best of intentions don’t necessarily translate to success in implementation.

This briefing highlights what we hope to see when the details of the policy are released in the coming weeks, based on some key lessons from Canada’s past struggles in implementing successful environmental policies.

What is the Clean Fuel Standard?

The CFS requires all suppliers (producers, importers, and distributors) of fossil fuels in Canada to reduce the carbon intensity (CI) of the fuel over its lifecycle – that is, the amount of GHG emissions associated with producing and consuming the fuel. Under the policy, all fuel sold in Canada will be required to fall below a mandated maximum carbon intensity limit.

According to the draft regulations, key features that will be part of the policy include:

• Technology-agnostic. Fuel suppliers will likely have flexibility to choose how to achieve reductions. This may include reducing emissions along the fuel supply chain, improving energy efficiency, substituting existing fuels with lower-intensity fuels (such as biofuels, propane or natural gas), or turning to non-emitting sources such as electricity or hydrogen.

• Credit trading scheme. Fuel suppliers may be able to generate credits by supplying a fuel with a carbon intensity below the limit – and the credit can either be banked or sold on the market. Alternatively, if a supplier is unable to comply with the targets, they must purchase new credits or use their banked credits to offset their emissions. The credit trading scheme will also likely be available to other companies that deploy alternative energy sources (e.g., electric vehicles, wind power), who may opt into the credit market voluntarily.

• Exclusions. Exclusions cover fuels that are exported from Canada, fuels that are in transit through Canada, and coal combusted at facilities that are covered by coal-fired electricity GHG regulations. Exemptions will likely also apply to fuels used as feedstocks in industrial processes or for other non-combustion purposes (e.g., solvents).

The experience of other jurisdictions suggests that the policy is likely to succeed in avoiding emissions – at least with respect to transportation. B.C., California, and the EU have had similar policies in place for transportation fuels (gasoline and diesel) since 2011, and in all cases, the CIs of fuels have been reduced.

B.C.’s policy resulted in the “avoidance” of 7.73 million tonnes of CO2 between 2010 and 2017, compared to emissions without the policy. However, since people drove more over that same period, emissions rose overall.

Canada’s CFS is wading into uncharted territory in that it will be the first policy of its kind to extend beyond transportation fuels to include building and industry fuels. It will remain to be seen if similar outcomes will be realized in these other sectors.

In Canada, our fuels have been regulated under the Renewable Fuel Regulation (RFR), which was established in 2010 as a measure to support the biofuel industry.¹ The regulation, which expired in 2017-18, required fuel producers and importers to have an average of 5% renewable fuel content (primarily ethanol) in gasoline and 2% renewable fuel content (primarily biodiesel) in diesel fuel. Many provinces have since built upon the regulation by increasing their own biofuel standards.

However, we know that biofuels have variable environmental records. In fact, certain biofuels can generate greater emissions over their lifecycle than some fossil fuels. The CFS partly avoids this issue by giving fuel suppliers the flexibility to choose the means of intensity reduction (not just by supplanting with ethanol or biodiesel) at any point in the lifecycle – from production through transportation to consumption. Another benefit of broadening the policy beyond biofuels is that it may stimulate more innovative and less expensive approaches to reducing GHGs.

Why do we need a CFS if we already have a carbon tax?

While both the CFS and carbon tax are intended to chip away at Canada’s overall emissions levels, they deploy different and complementary strategies to do that. A carbon tax is intended to reduce the amount of fuel consumed by making it more expensive. The CFS is intended to make the fuel that is used less carbon intensive. 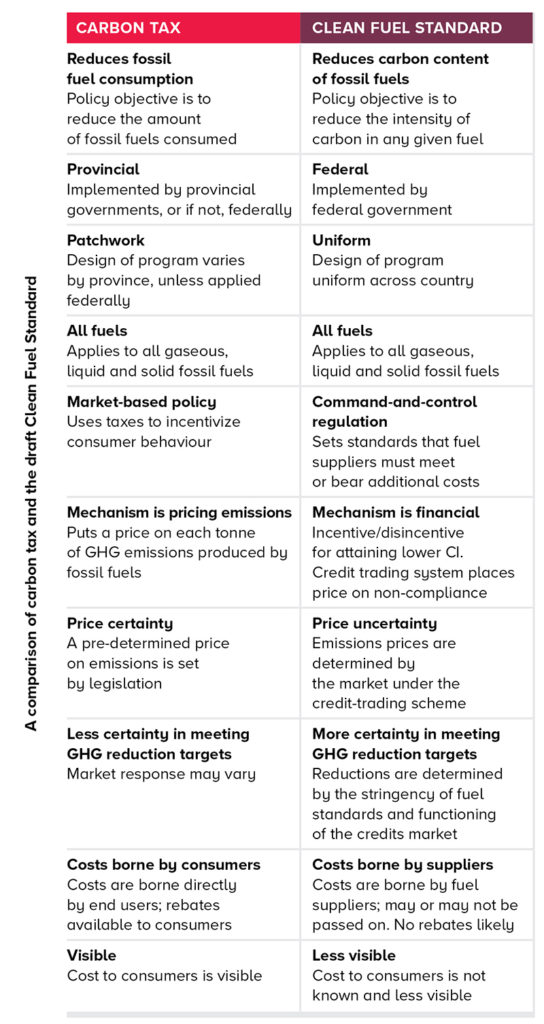 The CFS does some things a carbon tax can’t. For example, the commercial transportation sector is not particularly responsive to a carbon tax in the short-term, as it can’t simply reduce the number of kilometres travelled and there are few viable alternatives to petroleum-based fuels for the industry. Until vehicle stocks turn over to more efficient or alternative fuel versions, the CFS will be a more effective way to reduce GHG emissions.

Further, the CFS may be more politically palatable than the carbon tax. Since it was introduced to Canadians four years ago, the carbon tax has faced real or threatened court challenges on jurisdictional grounds from Saskatchewan, Ontario, Manitoba, New Brunswick and Alberta. The CFS may be more acceptable because the mechanism is not as visible to consumers. Unlike the carbon tax, any additional costs under the CFS will be borne by fuel suppliers – and may or may not be passed onto consumers. The costs could be negligible, if for example, fuel suppliers reduce CI through electrification, rather than having to purchase credits.

We strongly support the intentions of reducing GHGs across Canada, and low-carbon fuel policies have shown that they can be effective. But in the face of a changing climate and fragile economy, good intentions are not good enough.

If this policy is to succeed, it must be designed with consideration for Canada’s unique landscape. The federal government should learn from its struggles to find support for other environmental legislation, such as the carbon tax and Bill C-69, to build a policy that has broad support and is inclusive. We have identified several key lessons that may be critical for the ultimate success of the CFS:

Involvement of the provinces. Environmental policies have foundered when there is insufficient flexibility on how they are implemented across different provinces. The CFS interacts with other provincial legislation – whether the cap-and- trade system in Quebec or New Brunswick’s Climate Change Action Plan. Ensuring it is responsive to regional differences, and is harmonized with legislation across 13 jurisdictions, will not be easy. Collaboration with the provinces and respect for their distinct approaches is critical.

The EU faced a similar challenge in responding to the different contexts of its member states. The EU’s policies resulted from collaboration between the EU central body, country governments, and industry. The policy gave the states flexibility in deciding how to reduce the carbon content of transport fuels, in setting standards for different fuel types, and in choosing incentives/disincentives. As a result, the policies have received widespread acceptance and support among member states.

Learning. B.C. has had a low-carbon fuel standard for transportation in place for almost 10 years, and has figured out an approach that works for suppliers: from life-cycle analysis of emissions through to a carbon trading system. Yet, it is not clear that the federal government is interested in learning from B.C.’s experience, and instead has signaled that it will craft its own approach. It does so at its peril as this may jeopardize the province’s efforts and open the door to many practical complexities.

Fairness. The CFS will produce winners and losers – within and across sectors and regions. The “fairness” of these impacts will be important both for the acceptability of the policy and for ensuring it doesn’t undermine the country’s economic prosperity. There is concern that the policy will hamstring Canada’s trade-exposed sectors such as steel manufacture or mining, as they cannot raise prices to offset any increased costs. How will the policy ensure that different groups aren’t unfairly impacted, resulting in resentment and pushback? 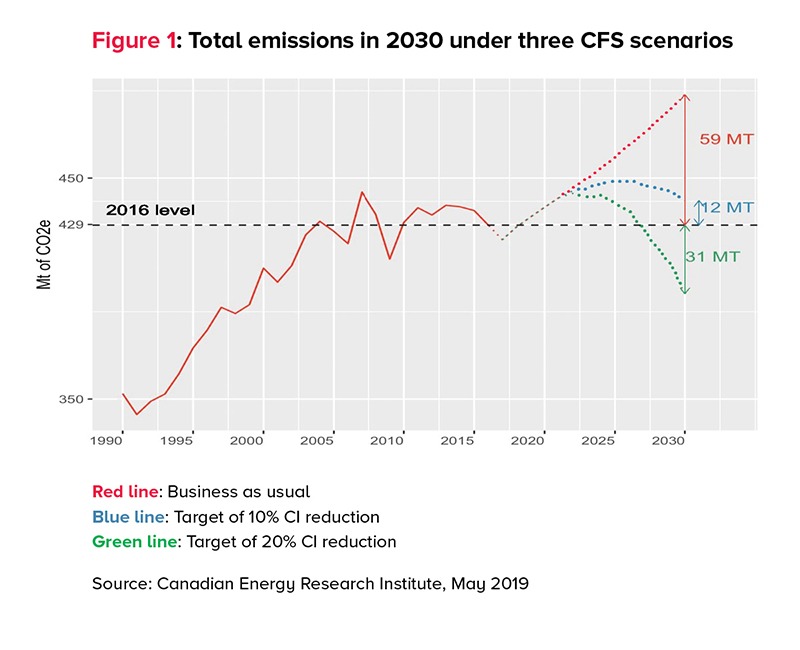 Administrative burden. The implementation of the CFS will be complex, requiring substantial work on the part of both fuel suppliers and government agencies to demonstrate compliance. If the policy is to succeed, administrative costs must not outweigh its benefits.

Effectiveness. The transition will not happen overnight, and the government must provide industry not only with a predictable timeframe, but also time for investments, infrastructure, and new technologies to take place. So far, the government has indicated that it is aiming for a carbon intensity target of 10% for the liquid stream, commensurate with other jurisdictions. According to a recent analysis by the Canadian Energy Research Institute (CERI), a 10% target will not be sufficient to achieve GHG reductions below 2016 levels because of projected increases in fuel use across Canada (see Figure 1).² The report says that a 10% target will create “avoided emissions” compared to emissions without the policy, but a target of 20% would be needed to actually reduce GHGs below current levels.

Cost. Cost remains a key question, and is much more difficult to answer than for carbon tax, where the price is clear. Under the CFS, any costs will be borne by the fuel supplier. Whether those costs are low or high will depend on the cost of the approach that the supplier uses to implement the CI reduction. This may be high (for example, purchasing offsets at $180 per tonne) or low (if a technology is implemented that winds up saving the supplier money). In some cases, costs may be passed on to the end consumer, but the challenge is different for trade-exposed industries that have to compete with international imports.

Many questions remain as to how this policy will play out among different sectors over time. The details provided by the federal government in the coming weeks will help establish how politically, economically and environmentally successful the CFS is likely to be.