How to Increase and Diversify Exports: Manitoba

Manitoba depends on its ability to trade. With the economy taking a major hit due to the COVID-19 pandemic, it will be vital that Manitoba is able to take full advantage of its trade opportunities once the pandemic subsides. Recent trade agreements, such as the Comprehensive and Progressive Agreement for Trans-Pacific Partnership (CPTPP), give the province the potential to expand trade through the diversification of products (what it trades) and markets (where it trades). However, realizing the full potential of these agreements requires better information for exporters and the government agencies that assist them to target the full range of new opportunities. This information has not been available at the product level for individual provinces.

New modelling of trade diversion in Japan created by tariff reductions under the CPTPP provides this information.¹ An extension to the report More Than the Usual Suspects: Western Canadian Export Opportunities to Japan under the CPTPP, this policy brief uses the modelling to shed new light on Manitoba’s best export targets in Japan. Of the 194 tariff reduced opportunities identified for Canada, only 48 products already exported from Manitoba are expected to see gains. Only 14 of these 48 products are expected to see more than US$200 thousand in total gains with Japan under the CPTPP. The small number of products identified sheds light on the factors that constrain Manitoba’s ability to achieve true product diversification under trade agreements – restricted by the limits of tariff reductions and by the capacity and characteristics of geography and resources (particularly for agricultural products). Nevertheless, having identified this narrow list of products allows export promotional agencies (EPAs) to focus outreach activities on targeting the right firms to confirm their capacity and export readiness.

Figure 3 illustrates some of the top expected export gains for Manitoba with Japan as a result of tariff reduction and trade diversion under the CPTPP, and the potential impact of U.S. competition from the recent U.S.-Japan partial deal, effective January 2020. The table is rank ordered from largest to smallest expected Manitoba export gain (Column 2).

Manitoba sees the largest gains in some of its already highly traded products with Japan. For example, Manitoba is the largest exporter of fresh or chilled pork, frozen pork and frozen pork products to Japan, accounting for 64% of Western Canadian exports and 43% of Canadian exports to Japan.² Subsequently, with tariff reductions, the largest gains are expected in these three areas with a total gain of US$659 million (Column 2). However, these three products also face high competition from the U.S. as the U.S. already exports on average more than Canada (compare Column 5 with 6) and has now received the same, if not better, tariff provisions than Canada under the new U.S.-Japan bilateral partial trade deal (Column 7, Figure 3). For example, Canada is ranked second, representing 40% of the Japanese fresh or chilled pork market, after the U.S. (57%) as of 2018 (Figure 1). Nevertheless, Canada has gained traction over the U.S. for chilled pork in Japan. Coupled with the one-year advantage over the U.S. in tariff benefits for fresh or chilled pork and the market strategy that focuses on higher quality, Canada may capture the total estimated gains of US$372 million. Figure 1 shows the growing market share of Canada in the Japanese fresh or chilled pork market at the expense of the U.S. The diagram also shows the significance of Manitoba exports as a share of total Canadian exports.

Pig fat is also expected to grow by US$1.4 million from US$4.5 million. Manitoba supplies 40% of Western Canadian pig fat exports to Japan. Previously less-traded pork products such as frozen bone-in ham also expects to see a total gain of five times more than the five-year average baseline. While the U.S. has similar tariff provisions with Japan for both products, Canada already exports much more than the U.S. to Japan (compare Columns 5 and 6).

Aside from pork, Manitoba sees gains in other already highly traded export opportunities such as natural honey, unwrought nickel, live horses and linseed oil. The U.S. does not have tariff benefits under the U.S.-Japan agreement for all these products, giving Canada ongoing advantage over the U.S. (Column 7).

Finally, Japan’s tariff reduction offers opportunities for new exports that are currently less traded by Manitoba, but which expect significant gains. This is particularly the case for Manitoba’s plant protein and pulses industries such as protein concentrates and textured protein substances, dried shelled peas and dried shelled kidney beans. Protein concentrates (HS210610), for example, expect to see a gain of US$839 thousand (Column 2) from the current baseline of US$156 thousand (Column 1). The U.S. has similar tariff provisions as Canada for protein concentrates under the U.S.- Japan agreement and exports on average 151% more than Canada over the last five years. Canada is ranked fifth after U.S., China, Australia and India as the largest exporter of plant protein to Japan. Nevertheless, the plant protein market is fragmented in nature owing to the use of different plant ingredients and the presence of numerous manufacturers.³ Canadian protein concentrates are mainly pea-based while the U.S. is soy-based.4 Figure 2 shows the top global producers of some of the major plant protein ingredients – lentil, barley, hemp, flax, oat, pea, canola and mustard.

Increasing purchasing power, technological innovations and growing health awareness among consumers are anticipated to open new market avenues and opportunities in the Asia Pacific for the plant-based protein industry.5 This may also mean the region will attract competition and industry rivalry. Having the CPTPP gives Canada and Manitoba some advantage over non-members in securing market share. But promotional efforts, targeted market strategies and informing consumers of new scientific evidence on nascent plant ingredients such as pea and canola (where Canada dominates) is important to increase acceptance rate and capture market share in Japan. The demand for plant protein ingredients is expected to reach 251 kilotons by 2025, growing at a compound annual growth rate of 5.8% from 2016 to 2025.

Canada West Foundation’s modelling has narrowed the list of export targets by tariff reduction, identifying new opportunities for both already highly traded and less-traded exports at a level of specificity that is useful for businesses. This policy brief has further narrowed the focus to identify what matters for Manitoba. To test the usefulness of our results, we consulted with various industries to gain insights into the market dynamics, feasibility and capacity in export readiness for some of these products as well as discuss the threat of U.S. competition. Pork and plant protein discussed in this brief were two of these examples. This verification process would have to be repeated with each opportunity. EPAs should use our results to target the right businesses and take our results further with conversations on capacity and export readiness, as well as current supply chain and logistics structures. The results should also save EPAs time and resources in determining the kind of assistance required, which may differ depending on firm size.

While our study did not include products that do not experience tariff reduction, this does not mean that products such as canola seeds are no longer important for the province. However, the narrowed results allow EPAs to more efficiently and effectively identify the right businesses and develop targeted seminars and outreach programs rather than the “boiling the ocean” approach.

In a separate policy brief, we make the case that this dataset needs to be made available through new online tools, that allow businesses to directly use and search for specific export opportunities. This would allow EPAs to engage more businesses in an efficient, effective and affordable manner that makes the pursuit of smaller volume trade opportunities more viable.6

This kind of modelling should be done for other members of the CPTPP beyond Japan, as well as other agreements, to identify export opportunities for Canada. Therefore, as it becomes standard practice done in a timely manner, Canadian businesses can maintain their first mover advantage.

For each product, Columns 1 and 3 displays the five-year (2014-2018) average baseline of Manitoba and Western Canadian exports to Japan. Columns 2 and 4 are the calculated total expected export gains for Manitoba and Western Canada respectively. Columns 5 and 6 compares the historical five-year average (2014-2018) of Canada export and U.S. export to Japan for additional insights on the degree of Canadian export competition with the U.S. for Japan. Column 7 compares Japan’s tariff schedule under the CPTPP with the U.S.-Japan agreement to identify products where Canada has the same, better or worse provisions than the U.S. for potential areas of export competition. 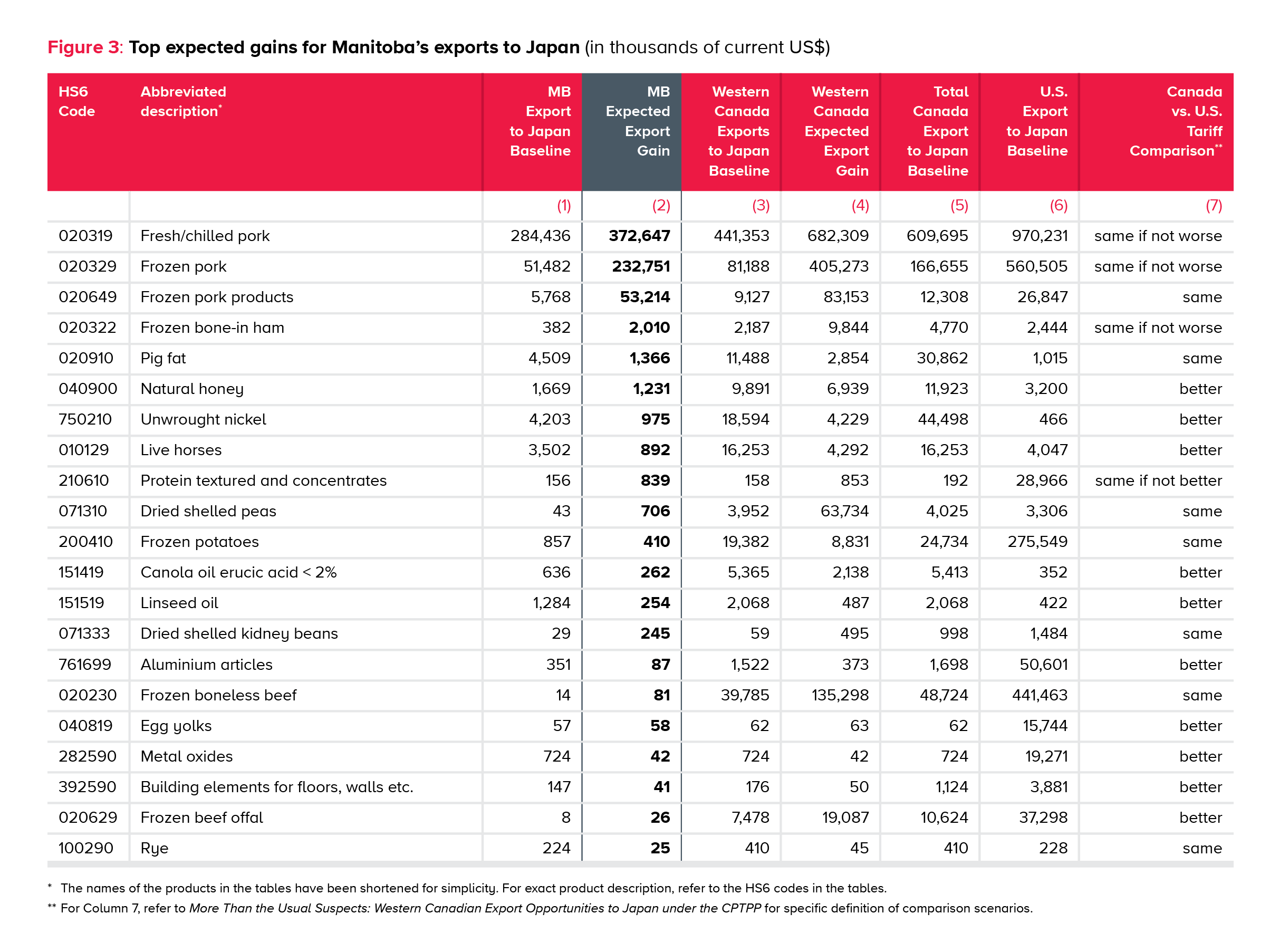 1 Dan Ciuriak and Canada West Foundation’s modelling has winnowed a list of good candidates to increase exports under the agreement.

2 Percentage of Column 1 with Column 3 and Column 5.

4 Currently, soy and dairy protein (and increasingly wheat) ingredients have higher acceptance rate as a result of confirmed augmentation of health benefits from scientific research, according to Grand View Research 2017.