Canada’s poor productivity performance is holding back improvements in its standard of living, including wages. In particular, labour productivity has been virtually stagnant since 2000.¹ For the last few years, Canada’s Gross Domestic Product (GDP) per capita has hovered about $14,000 below that of the U.S.² In advanced services, manufacturing and energy industries, the workforce in the U.S. is twice as productive as Canada’s.³

The usual solutions to improved productivity include investing in more capital items such as machinery and information and communication technology, or asking people to work harder. These solutions are not working. As more routine tasks are being assigned to machines, people are being asked to do more thinking, problem-solving and relational tasks. Rather than becoming less important, cognitive skills are becoming more important. It is clear that the Canadian economy needs to increase investment in another kind  of capital: human capital.

Working smarter, not harder can improve both productivity and economic growth. Working smarter requires the  skills to learn new ways of doing things. Advanced literacy skills increase a person’s ability to learn easily and efficiently. New evidence shows that improvements  in literacy can also increase productivity and GDP per capita more than ever before.? Research also indicates that improving the skills of the people with the lowest levels of literacy provides an even greater boost. Furthermore, Canadian experience has shown that literacy skills can be increased through inexpensive and efficient workplace learning programs.

Traditionally, the biggest drivers of improved labour productivity have been investments of financial capital and technology. Humans can accomplish much more when machines do the hard, repetitive, dirty work, leaving people to run the machines and do higher-order thinking and communication tasks. But the nature of work is changing. Jobs now require higher levels of both technical and cognitive skills to take full advantage of the technologies at their disposal. These skills are more important than ever – the impact of advanced literacy levels on the economy has doubled since 2003.? Recent analysis of international and Canadian literacy levels and economic performance, by researchers Guido Schwerdt and Simon Wiederhold empirically, measured the relationship between literacy and productivity. They found that:

01 As increased literacy skills are put to work, productivity growth increases on average by five per cent and GDP per capita by three per cent for every one per cent rise in average literacy scores.

02 There is a bigger economic return to boosting the  skills of people with lower literacy levels than those  with higher levels.?

These findings come from an analysis of data from the 2011 Programme for International Assessment of Adult Competencies (PIAAC) and international economic data from 1970 to 2010. The researchers examined the impact of differences in average literacy skills versus growth rates of inter-country GDP per capita and labour productivity growth, for 31 countries. The analysis was extended to include Canadian provinces, through funding from Employment and Social Development Canada’s (ESDC’s) Office  of Literacy and Essential Skills. Those results at the provincial level were virtually identical to those observed nationally and internationally.

In today’s context, if Canada’s literacy increased by one per cent on average, GDP would rise by three per cent, or the equivalent of $57 billion in additional economic output annually – 25 per cent more than the food and accommodation industry’s annual contribution to the Canadian economy.?

As with all investments in capital, the full impact on the economy from an investment in improved literacy skill will not happen all at once. The impact will be felt gradually, as the new skill is put to use. Based on the historical data, the authors of the study estimated that it would take six  to nine years for half of this new skill to be absorbed into the economy. However, the faster that jobs and job processes are ready to use newly available skills, the faster the economy will achieve the productivity gains.  As jobs requiring low literacy skills are disappearing from the economy, the improved literacy skills will be absorbed more quickly in the future than they were historically,  and the overall impact will continue to grow.

Where to focus an investment in literacy

Almost half of Canada’s workforce has lower skills than required to perform the peak cognitive demands of  96 per cent of the jobs in the Canadian economy.? This is commonly set at Level 3 literacy skill (Figure 1). This means that nine million Canadians could benefit from an upgrade to their literacy skills. While it would be great to improve all their skills, there are some groups in particular where improvements could make the greatest impact.

Figure 1 shows that the U.S. has poorer literacy scores than other countries – and yet its productivity is  higher. This is due to the efficiency of the labour market  in the U.S. Employers there are better able to match people’s skills with the demands of their jobs – whereas  in Canada, many people are in jobs that do not match  their cognitive skill level.10 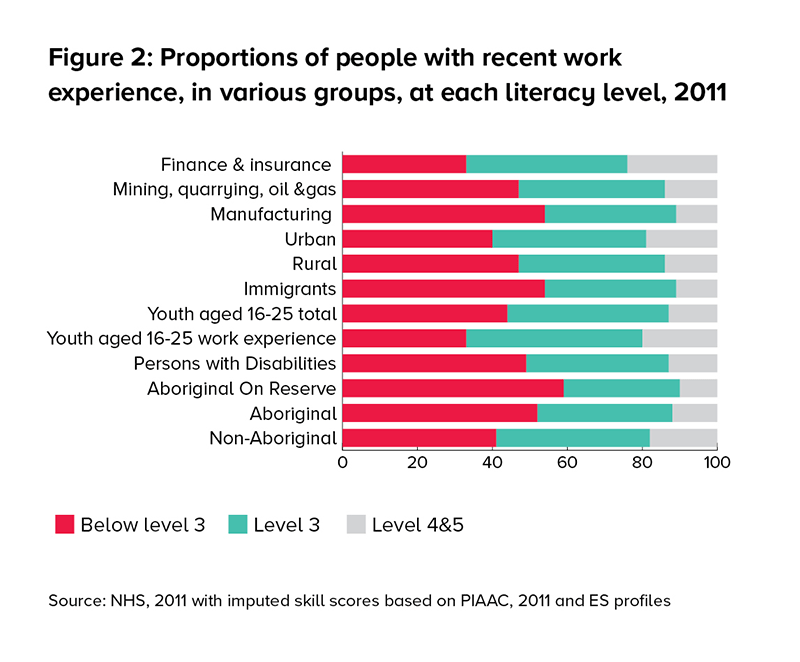 A variety of groups have high proportions of people with lower average scores (Figure 2). These include new immigrants, Aboriginal peoples, persons with disabilities, youth and employees working across the spectrum of industry sectors. Figure 2 shows that even in some of the most advanced industry sectors, where virtually all jobs require at least Level 3 literacy, more than 30 per cent of the employees have low literacy levels. Targeting upgrading efforts to these groups would provide the most efficient way to increase average literacy scores.

The proportion of all youth, aged 16-25, with lower literacy levels is 44 per cent.11 As Figure 2 shows, the proportion of lower skilled youth with recent work experience is estimated to be only 33 per cent. Youth with higher skills are first to become employed. The negative effects of having low literacy skills starts in youth and perpetuate over a lifetime.

There are effective ways to reach the people in each of the groups listed in Figure 2 through which Canada could increase average literacy scores: community colleges, local learning centres, community service agencies and a variety of online applications provide instruction in foundational skills. What’s more, there are programs that have been proven to do this in the workplace – where the results of the upgrading will be put to immediate use. 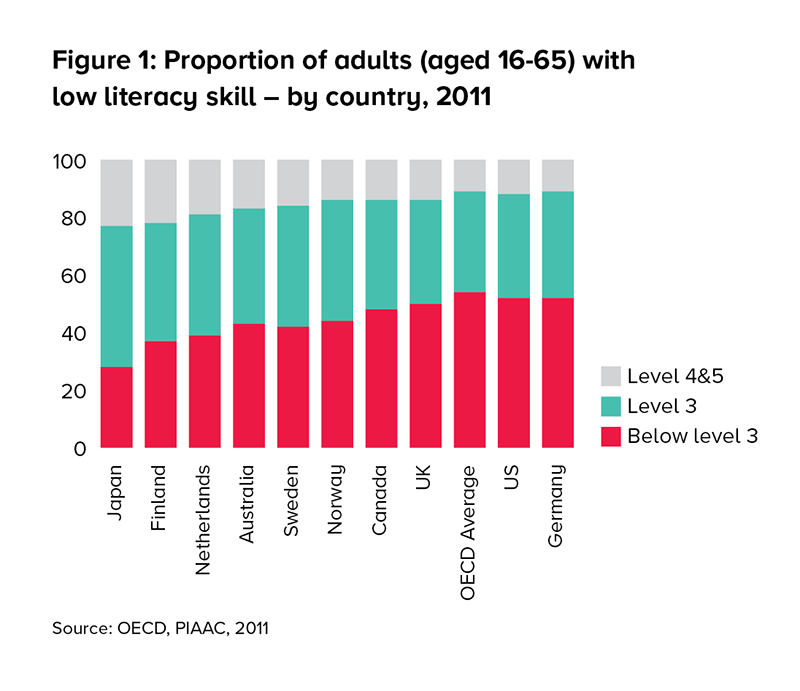 How Canada could achieve an increase  in average literacy skills

A series of studies funded through the Adult Learning, Literacy and Essential Skills Program – a program of Employment and Social Development Canada (ESDC) – has shown that high-quality instruction, delivered by well-trained instructors, using curriculum designed to meet the needs of individual employees and employers and using authentic workplace materials, can increase the literacy skills of employees by up to an average of 24 points. It has also yielded a 23 per cent direct return on investment to employers in the first year alone.12

These programs improve productivity and other business performance indicators and have the added bonus of improving skills people need for living as well as working.

> Work with employers to identify business issues that might be addressed through literacy skill upgrading, so that the increased skill is more likely to be put to use, and profile the levels of literacy demanded by the tasks of the job, so that the level of instruction is appropriate.

> Develop curriculum that explicitly focuses instruction on the tasks of the job and the factors that underlie the relative difficulty of the tasks. Curriculum also includes content that is relevant to the particular workplace. > Deliver instruction through well-trained, skilled and experienced instructors and actively manage instructional quality.

> Systematically assess learners at the beginning and end of the program to clarify their learning needs,  to adjust the instructional focus to better fit their needs, and to measure skill gain and instructor efficiency  and effectiveness.

Governments and employers around the world, from Mexico to South Korea, have found themselves obliged to focus more effort on increasing key cognitive skills to meet the needs of changing jobs. Lower-skilled, more routine jobs are most likely to continue to disappear as the trend towards technology continues. As we discussed in Literacy Lost: Canada’s basic skill shortfall, the supply of literacy skill is not rising quickly enough to meet the cognitive demands of new jobs.

Improving the average literacy skill of even a portion of the workforce – and putting the new skill to full use – would show big returns for both the individuals and for the economy as a whole. Comparative advantage is achieved by countries that get ahead in raising literacy rates for those with lower skills. The sooner Canada takes action  on this challenge, the better.

Federal and provincial governments already support corporate investment in capital and technology – realizing the full potential of these investments will depend upon a parallel investment in literacy. The economic benefits would be in the tens of billions yearly.

The social benefits of having more workers to meet the demands of new and changing jobs, to maintain employment and to continue to maintain a good quality  of life are worth the effort.

What’s more, not doing this will perpetuate an opportunity lost.

? Coulombe, Serge and Tremblay, Jean-François. Literacy, Human Capital and Growth.  Working Papers of the Department of Economics of the University of Ottawa. September 2004

11 Lane, Janet and Murray, T. Scott: Ready or Not: The need to improve this gen literacy. April 2019