Sarah Pittman is a policy analyst at the Canada West Foundation and the author of the China Brief, a compilation of stories and links related to China and its relationship with Canada’s West.

The new United States-Mexico-Canada Agreement (USMCA), which is destined to replace NAFTA, has generated controversy in Canada over a clause that seems intended to pressure Canada from negotiating a trade agreement with China. While these fears are at first understandable, a closer look at the facts shows the concerns are also largely overstated.

At issue is Article 32.10, “Non-Market Country FTA,” which says that any member of the agreement can pull out if another signatory enters a free trade agreement with a “non-market country” as defined by any member of the USMCA.¹ This has stoked concerns that the U.S. can use this clause to pull out of the deal if Canada enters trade talks with China. But this doesn’t mean that Canada can’t grow its trade with China. Canada will still be able to engage with China on trade in several different ways. Indeed, other options may even be better anyway.

Trade agreements are only one of the many tools available for increasing trade; others, like diplomacy and government/business engagement, have been used successfully for decades to develop the Canada-China relationship.

Further reading: What Now? | Strong Signals: China’s changing direction and what it means for Canada

As a result, Canada already has a strong economic relationship with China. Even with the USMCA clause, it’s poised to grow. That’s good news for the West and all of Canada – with or without a Canada-China trade agreement. Ironically, it’s the U.S.’s own tariff actions vis à vis China that have spurred more Canada-China trade.

China is already Canada’s second-largest trading partner – even without a “free trade” agreement.

China is very important to Canada’s economic prosperity. The sheer volume that Canada and China trade in goods shows why. In the last 10 years alone, our trade with China has almost doubled. In 2017, nearly $100 billion worth of goods was traded between the two countries – compared to $48 billion in 2007.² The amount traded between the two countries has risen significantly in the last several years, and even in the last few months.

Economically, the relationship is more important for Canada than for China. But politically, it is helpful for China to have a strong trade relationship with an advanced Western economy that borders the U.S. China is Canada’s second-largest export market, and second-largest source of imports (behind the United States for both). Canada is China’s 20th largest export market, and 19th largest source of imports.³ Part of this difference is because of China’s size: China has the world’s largest population (1.4 billion) and is the world’s largest export market. 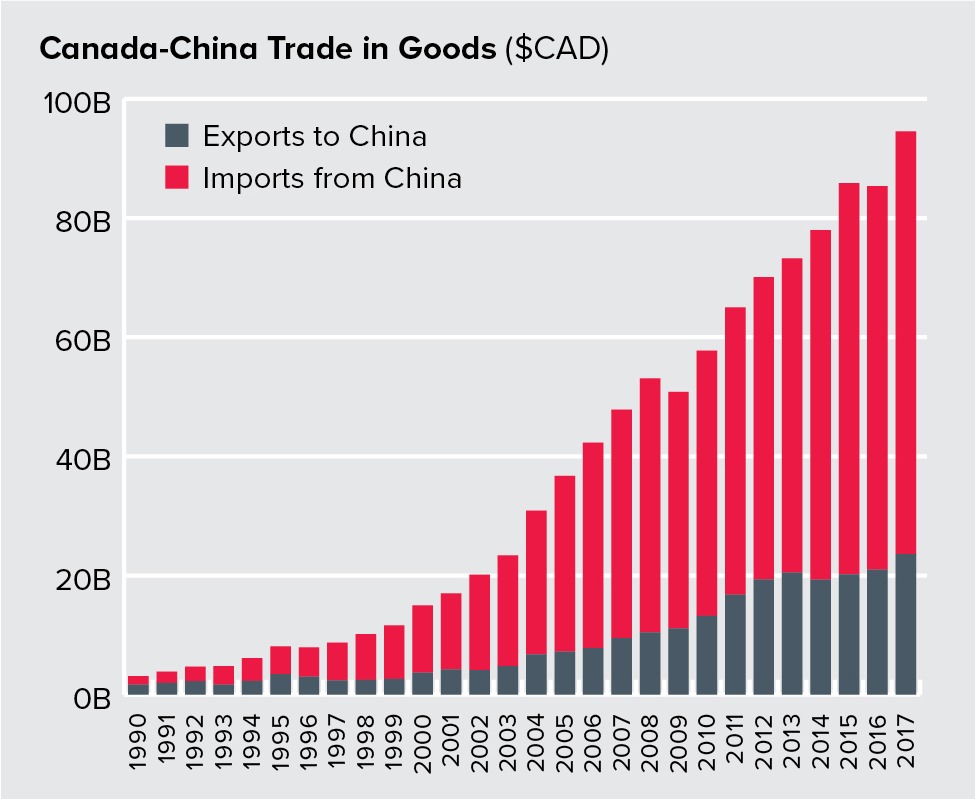 Trade often refers to goods – but trade in services is also important. In 2016, the total Canadian services exports to China amounted to $3.1 billion, a more than fourfold increase from 2000. In 2016, China earned $2.45 billion selling services to Canada, a more than fivefold increase from 2000. China is Canada’s third-largest market for services, following the United States and the United Kingdom. Some (but not all) of the important parts of trade in service include:

> Students: In 2017, approximately 187,000 Chinese students were studying in Canada, 32 per cent of all foreign students in Canada. The federal government has plans to increase the numbers of Chinese foreign students, who contribute significantly to the $11.6 billion that foreign student education brings in.?

> Investment: According to the University of Alberta’s China Investment Tracker, China invested a whopping US$6.5 billion (about C$8.4 billion) in Canada in 2017 alone, investing heavily in consumer products, entertainment and real estate, and oil, among other sectors.?

Trade between the countries has grown for decades. When good political decisions are made, it grows even faster.

These political decisions can be bilateral, between Canada and China, or on a global scale.

Late 1930s: Canadian Norman Bethune was a doctor for the Communist Party during the Chinese Civil War. While this was not a political decision, Bethune is still highly regarded across China, and this has positively influenced the political relationship between Canada and China.

1970: Establishment of diplomatic relations with China. Canada was one of the few Western countries to recognize China at that time.

2001: China joins the World Trade Organization. This integrated the Chinese economy far more into the global market, and the result was increased global trade.

2014: Canada and China signed a Foreign Investment Promotion and Protection Agreement (FIPA), which helps the foreign investor receive the same treatment as the domestic investor.? This was very much at the urging of Canadian business owners. According to the China-Canada Investment Tracker, Chinese investment in Canada was up nearly $500 million in 2015 from 2014, a 17 per cent increase.10

Each country has things that the other country needs. Because of supply and demand, trade between the two countries has almost continually risen. For example, China imports a lot of canola, mainly to use as oil and in animal feed; Canada, meanwhile, has the right conditions – and space – to grow canola. In 2017, Canada exported $3.6 billion worth of canola to China.11

Trade has grown and can continue to grow substantially even without a free trade agreement.

Trade agreements are a good tool to increase trade between two countries – but that does not mean that without them, trade will not grow. Comparing Canada’s exports and imports to Mexico and China is a good example. In 1993 (the year before NAFTA came into force) trade between Canada-Mexico and between Canada-China was about the same. Fast-forward to the present, and Canada’s trade with China is worth more than $50 billion more than Canada’s trade with Mexico. This is likely because China is bigger and has experienced rapid recent growth. Because the economy is so much bigger, our trade relationship has more room to grow. This demonstrates the strength of the attraction of the Chinese market. Canada signs a comprehensive trade agreement with Mexico and trade remained flat; at the same time Canada hadn’t signed a trade agreement with China and trade grew – and continues to grow. The economies of China and Mexico are very different, and that’s the point – free trade agreements are not the end all, be all of healthy trade relationships.

In Canada, trade with China is especially important for the Western provinces. In 2017, British Columbia, Saskatchewan, and Alberta were the top three exporters to China ($6.8 billion, $3.9 billion, and $3.5 billion respectively). Of the top five items in Canada exported to China, four of them are widely produced in the four Western provinces (motor vehicles are the exception). 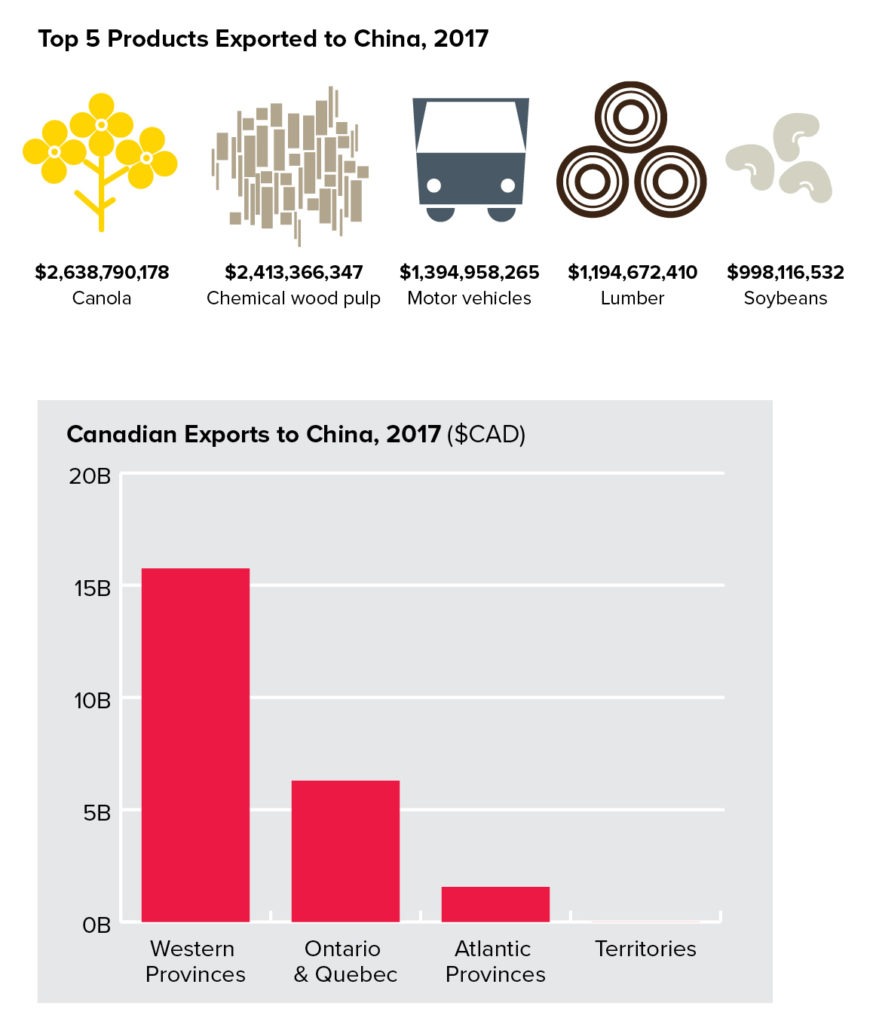 As long as demand from China continues to grow – as it undeniably will, given its population and the growth of millions becoming more affluent – opportunities for Western Canada will continue to grow, particularly food and natural resources. Canada has an abundance of these products, and China needs them due to fuel its staggering population. For example, China’s largest food import is soybeans. Canada’s soybean producers have a golden opportunity to help feed this demand. In 2016, China imported more than $32 billion worth of soybeans.¹²

In addition to these staples, Canadian businesses can also take advantage of China’s diversity and modernization. For example, the Canadian Prairies are poised to take advantage of the emerging plant ingredients industry and could export significant amounts of food ingredients, like pea protein or hemp fibre, to China.¹³ 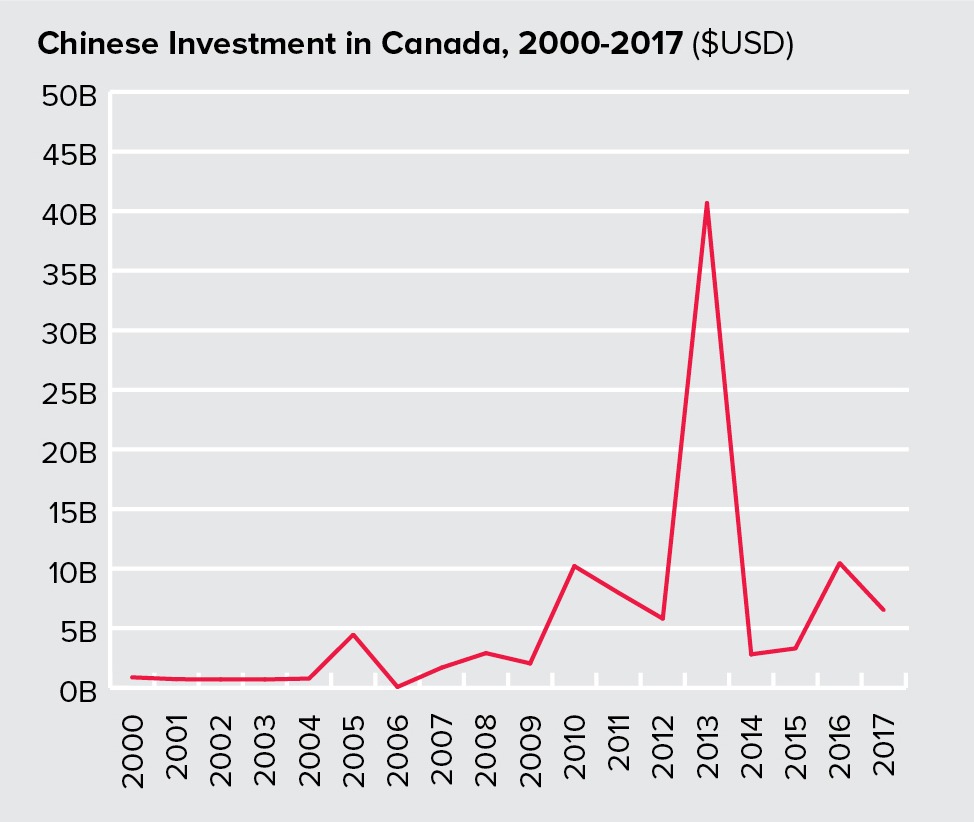 The economic relationship between China and Canada is already good. It could get a lot better.

There are a few ways for the relationship to get even better that do not involve a bilateral, comprehensive trade agreement. It is possible, for example, that China joins the 11-member Pacific Rim trade pact Canada has already signed on to – the Comprehensive and Progressive Agreement for Trans-Pacific Partnership (CPTPP) – before Canada signs the USMCA. It is also possible for Canada to develop sectoral agreements.¹? While sectoral agreements can be very useful, it is important to remember that they can only deal with non-tariff barriers; the WTO does not allow sectoral agreements on tariffs.

¹ The non-market country language is an explicit reference to China, which the U.S. considers to be a non-market economy. United States-Mexico-Canada Agreement, “Chapter 32: Exceptions and General Provisions,” 32-11.

² All dollar amounts are in CAD unless otherwise noted.