The planet cannot afford the environmental cost of feeding more than four billion people expected to be added to the population by the end of the century unless farming practices improve dramatically around the globe.

The world’s population is growing quickly, and the Global Middle Class is increasing even faster, leading to soaring food demand. This is prompting mounting concerns about the impact of agriculture on the global environment and climate change.

It takes hundreds of years to create an inch of topsoil and, over a few windy days, it can blow away.

Farming and nature are intrinsically linked. The most successful farmers work just as hard to improve their land as they do to harvest their fields. It’s a delicate balance between keeping the land in good shape and producing as much as possible, but Canadian farmers need to find that balance in order to keep their land sustainably producing for generations. Some countries with weaker economies don’t have the ability to maintain this balance, or see it as a luxury as they work to produce as much food as possible at whatever cost to the environment.

This balancing act with the environment is coming increasingly under strain as the amount of food needed to feed the world continually grows. The only solution for the long term is for the world to keep developing better, more efficient and more sustainable farming techniques.

Sustainable agriculture is one area where Canada can truly lead by example in the fight to reduce GHGs, manage land over generations and help feed the planet. In fact, Canada is particularly well-equipped to contribute here.

The problem is global, and it is two-fold: keeping up with a growing global population by increasing crop production, while at the same time limiting damage to the environment.

The United Nations predicts that the population will reach nearly 12 billion by the end of the century, with nearly a billion being added in the next decade. Compounding this situation is the number of people that will be entering the Global Middle Class in the coming years. 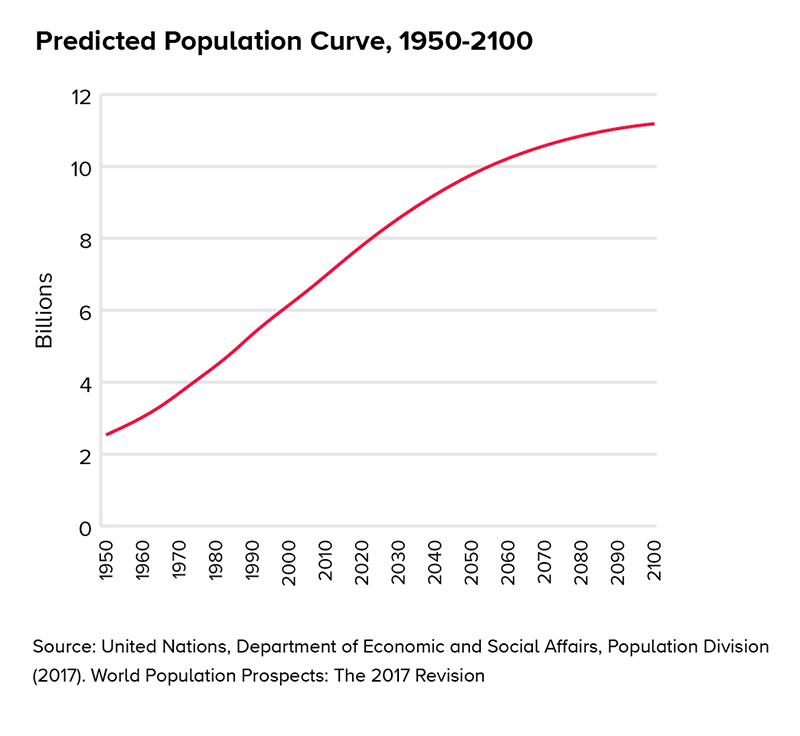 We define the Global Middle Class (GMC) as “those who have enough disposable income left after covering the minimum daily essentials and who feel secure enough about their income to begin to consume more and consume differently.”¹

Within the next 10 years an estimated two billion people from around the world will be added to the GMC. Weekly expenditures of households in the GMC, compared to lower incomes, spend significantly more on food items, such as produce, red meat and poultry, dairy and prepared foods.

People will also be able to afford to simply eat more: The United Nations predicts the world’s daily average calorie intake will rise from 2,789 calories in 2000 to 3,130 calories in 2050, a 12 per cent increase.²

Climate Change and Agriculture’s Impact on the Environment

The challenge of feeding the world now and in the future is daunting on its own. But it is compounded by two important problems: global agriculture’s impact on the environment and climate change.

01 Agriculture’s Impact on the Environment

Globally, agriculture has a significant impact on the environment, primarily through deforestation and some land management practices. In some places, these practices have led to loss of natural ecosystems, declining diversity and increasing net GHG emissions.4 There are also problems with soil formation and erosion which limits the ability of soil to hold moisture and provide nutrients.

The crux of the problem is this: the world needs more food, but the more food we produce in ways that damage the environment, the bigger an influence climate change has on food production – climate change lowers the ability to produce enough food in many regions.

Specifically, “climate change exacerbates land degradation, particularly in low-lying coastal areas, river deltas, drylands and in permafrost areas.”5 This means that the land will not be able to produce as much, either food for human consumption or feed for livestock that will become human food.

Dirtiest Oil On The Planet

Every year during the May to September dry season, commercial agricultural interests in Indonesia and other countries in Southeast Asia set fires to clear land for palm oil. In 2015, the daily GHG emissions from just the dry season fires in Indonesia were larger than the total daily GHG emissions from the entire U.S. economy and produced more GHGs than the entire economy of Japan or Germany in an entire year. Dirtiest oil on the planet? Palm oil from Indonesia and Malaysia. This makes Canadian canola oil even more attractive than palm oil,6 on top of its superior health benefits.

The world has two options when it comes to crop production: produce more food using conventional farming methods on more land (which will cause more problems in the long run) or enhance productivity and sustainability using land that is already being farmed. This is where Canada comes in.

During the past 30 years, there has been a fundamental change in how Canadian crop farmers operate. There has been rapid adoption of technologies that have benefited producers, improved our environment, saved and even enhanced the soil, all while helping to feed the world. Using zero-till methods, we can grow crops every year and still enhance soil volume and quality, instead of having to leave the land fallow every couple of years. Genetically modified (GM) crops, redesigned equipment and better fertilizer use have enabled a sustainable intensification of production.

This generation of Prairie farmers will be the first in history to leave their farmland in better condition than how they received it.

Below are some examples of the way farmers are using new techniques to produce high yields and be environmentally sustainable.

The introduction of GM canola and re-engineered planting equipment reduced production costs, increased yields and improved the environment. The Canola Council of Canada found that adopting GM canola resulted in reduction of herbicide use by 20 per cent, decreased soil tillage, and cut diesel fuel consumption by the equivalent of eliminating 500,000 cars from our roads.7 At the same time, crop yields doubled, making canola the most profitable field crop for Prairie farmers.

There is a myth that environmentally sustainable farming techniques are not financially sustainable, but canola illustrates that’s just not true. Canola is a Prairie-made economic powerhouse. There are 43,000 farmers in Alberta, Saskatchewan and Manitoba who grow canola. In 2017, canola contributed $26.7 billion to the Canadian economy. It also accounted for more than a quarter of a million direct, indirect and induced Canadian jobs.8 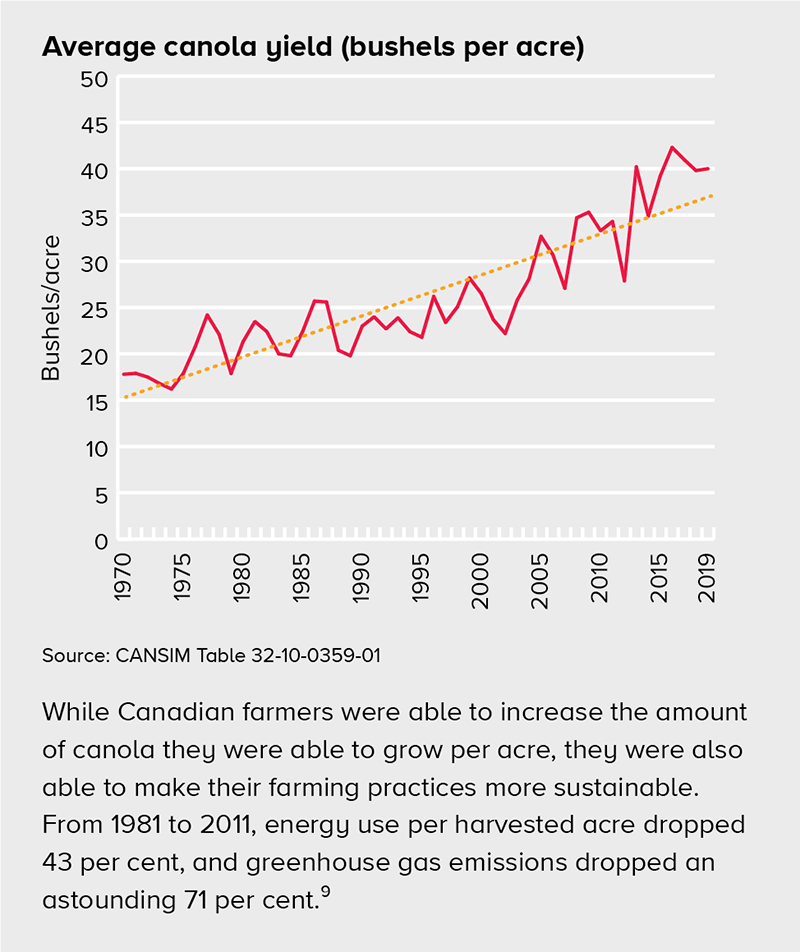 Zero tillage is an approach to crop farming that ensures the soil is kept as undisturbed as possible: the soil is mildly disturbed during seeding and left alone otherwise. This keeps the soil covered with crop residue, which helps conserve topsoil and water. It produces 10-20 times less erosion than conventional tillage.10 Zero tillage farming saves “money, time, and soil.”

While Canada is certainly not the only country that practices zero tillage farming, it is more widespread here than for many of our competitors. In 2017, the United States farmed 21 per cent of its cropland continuously as zero tillage,11 whereas in Canada in 2016 it was over half.

Zero-till is one of the methods that has contributed to a positive environmental legacy for Canadian farmers. Lana Awada at the University of Saskatchewan found that changes in farming methods on the Prairies have increased carbon sequestration by 400 per cent since the mid-1990s: remarkably, Prairie farms are now storing more carbon than they emit.12 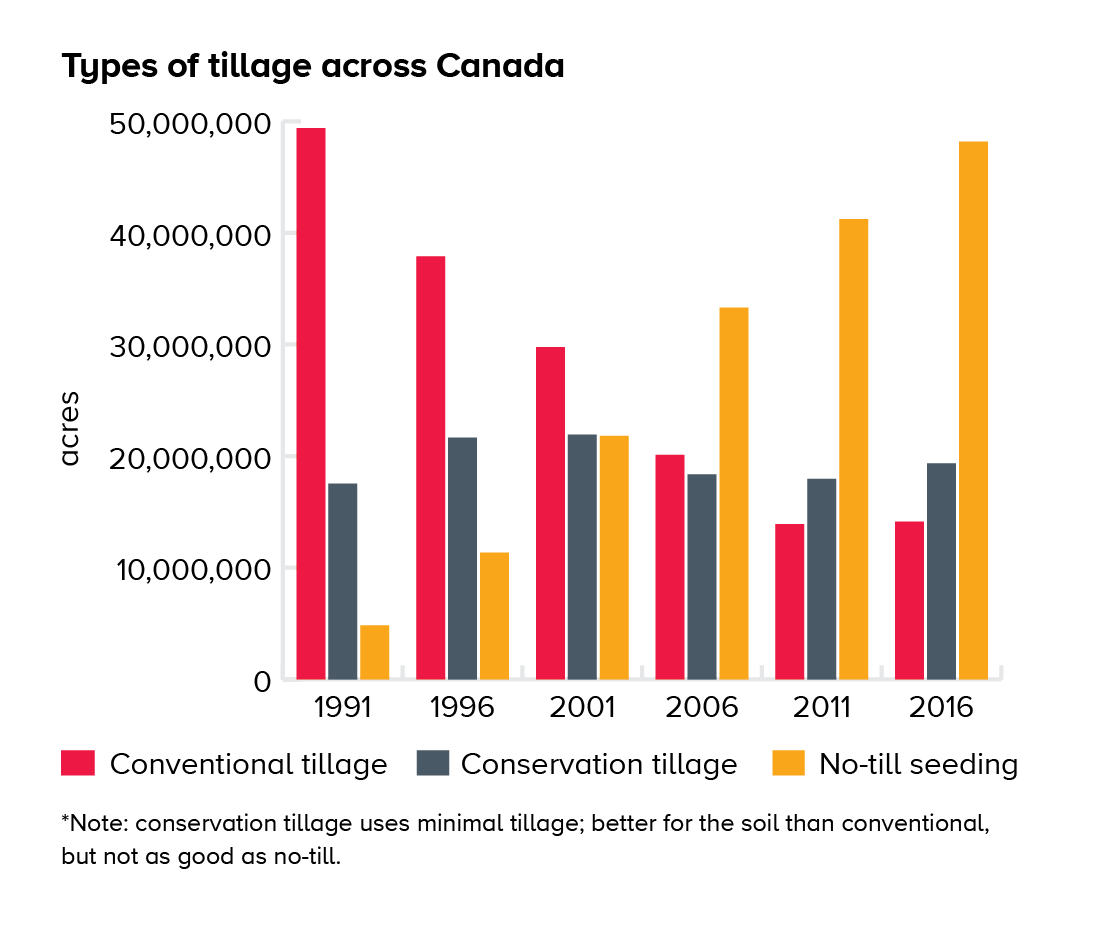 Crop science has flourished in the Prairies for decades. Each Prairie province is home to crop science centres, including federal research centres (such as the Lethbridge, AB research centre); crop associations (such as the Saskatchewan Canola Development Commission which has funded nearly 400 research projects since its inception in 1991);13 numerous colleges and universities; and for-profit agricultural science companies (for example, Corteva has several locations in Alberta). The goal of crop science is to make a crop more productive and suitable to both farmers and end users. This involves, for example, increasing desirable qualities of crops – for example, higher fibre wheat. The expertise is an advantage we have over other jurisdictions.

While Canada does not manufacture combines and tractors, it is a world leader in innovation for the seeding and harvesting implements that these machines use. Canadian manufacturers produce unique solutions to meet specific needs in diverse topographies and climates as opposed to the one-size-fits-all models sold by large equipment manufacturers. Better equipment built for local conditions allows farmers to seed and harvest more efficiently, further reducing GHGs and mitigating environmental harms.14 Additionally, Canadian agriculture equipment manufacturers are focused on cutting GHGs from fuel use, by increasing mechanical efficiencies, minimizing hydraulics, and lowering implement weight. Informal testing by one manufacturer, shows a 7 to 11 per cent reduction in fuel consumption as a result of (applying) these design measures.

Canada is a leader in sustainable crop production. This is good news for the rest of the world, because Canada has proven that it can grow quality food sustainably and in large amounts. For this reason, the world needs Canadian agriculture more than ever. This needs to be integrated into Canada’s agriculture trade promotion agenda to give Canada a rightfully deserved, competitive advantage.

12 David Dzisiak, “Canada can become a leader in sustainable food production in the 21st century,” The Globe and Mail, March 2, 2020, https://www.theglobeandmail. com/business/commentary/article-canadacan-become-a-leader-in-sustainable-foodproduction-in-the-21st/.