Marla champions the responsible development of the West’s natural resources for the benefit of all. Her focus has been on ensuring the well-being of communities in the context of development and change.

Skip to pdf of full report

Numerous voices from industry, government and the legal community have raised concerns that the federal project approval process is too onerous – that it takes too long, turns away too many “good” projects and drives investment out of Canada. Many blame the current federal environmental assessment (EA) process, but also fear that Bill C-69, which proposes to overhaul the EA process for major projects, may make things worse and stall infrastructure development and our economy.

For the most part, these concerns are based on a small number of high-profile examples, such as the denial of the Northern Gateway pipeline, the cancellation of the Energy East pipeline and the various challenges associated with the Trans Mountain expansion. While these “exceptions” are important, are they representative of the fate of projects that enter the federal approvals process?

A brief analysis of projects entering the federal EA approvals process found that:

• 95% projects that completed the EA process were approved.
• Even where significant potential adverse effects were found, 73% of projects were still approved.
• However, about 25% of project applications were terminated by the proponent before a decision was reached.
• On average, it took almost 3.5 years for a project to either receive approval or be terminated, with some projects taking over 10 years.
• An increasing number of projects are being terminated rather than receiving approval. What is driving this change – market conditions, Canadian competitiveness, regulatory scope or other hurdles – remains unknown.

Our analysis focused on 86 projects where there was a decision by the Canadian Environmental Assessment Agency, or where the EA was cancelled or terminated by the proponent. We did not include 77 projects for which the EA is currently in progress. We also did not analyze the 28 projects (shown in Figure 1) where a certificate was issued but an EA was not required, because the agency felt the effects were sufficiently well-understood and managed – almost a full quarter of the 114 projects that were subject to review.

The vast majority of projects that complete the federal EA process are approved.

Figure 1 shows that of 60 projects that completed the EA process, 57 were approved. That’s a great approval rate – 95%.

The approval rate for projects that complete the EA process should be high. This is the optimal time for the proponent to identify and rectify any issues that could be a problem (as well as to identify and enhance any potential co-benefits), in co-ordination with affected stakeholders, subject-area experts and government agencies. By the time a comprehensive EA process is completed, there should be no surprises left – for anyone.

Even when significant adverse effects are found, it isn’t necessarily a show-stopper.

The issues that comprised significant adverse effects included water quality; greenhouse gas emissions; effects on birds, fish and caribou; use of land and resources for traditional purposes; and Aboriginal rights and culture.

A large number of EAs are terminated at the proponent’s request.

Of the projects in our analysis, 21 were voluntarily “terminated” by the proponent. This number is substantial (over one-third) when compared with the 60 projects for which an EA was completed.

The reasons for termination vary enormously. In some cases, the market conditions changed enough that the proponent felt the project was no longer feasible (e.g., for the Aurora LNG project near Prince Rupert). In others, the project itself faced logistical hurdles that were too large (e.g., Cliffs Chromite project in Ontario). In at least one circumstance (Energy East), the termination was triggered at least in part by frustration with the regulatory process itself, and lack of political support.

Clearly a number of factors are at play – and our ongoing research will delve into a deeper analysis to better describe what happened. But these abandoned projects represent money left on the table. It is beneficial to understand how many of these terminations could have been avoidable – while also recognizing that there are legitimate reasons (environmental, social or financial) that some projects should not go ahead.

As shown in Figure 2, not all project types were equally likely to exit the EA process with a certificate. Electricity transmission and soil remediation projects had the best chances of receiving approval; hydro (which included dams, weirs and run-of-river), LNG and coal projects the least. 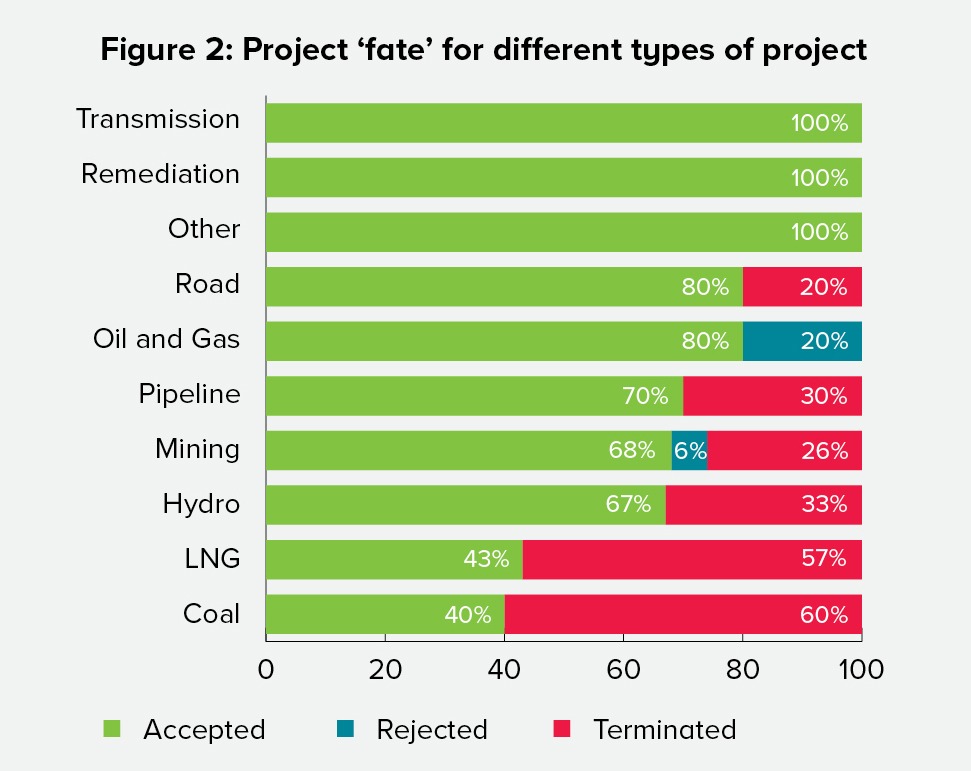 Moving through the EA process takes time – a LOT of time.

A key problem that this research has confirmed is that the EA process can take a very long time. Figure 3 shows the time it takes from the commencement of the EA to receiving a decision or having the EA terminated. On average, it took 41 months (almost 3.5 years) for a project to either receive approval or for the proponent to pull the plug. The range was large, with the high end at 124 months – over 10 years. These findings are consistent with other research that has been done on select projects under federal regulatory review. [1]

Not all of this time is under the government’s control; it also includes the time that a proponent needs to produce project documentation, prepare its Environmental Impact Statement, and conduct specialized studies, for example. 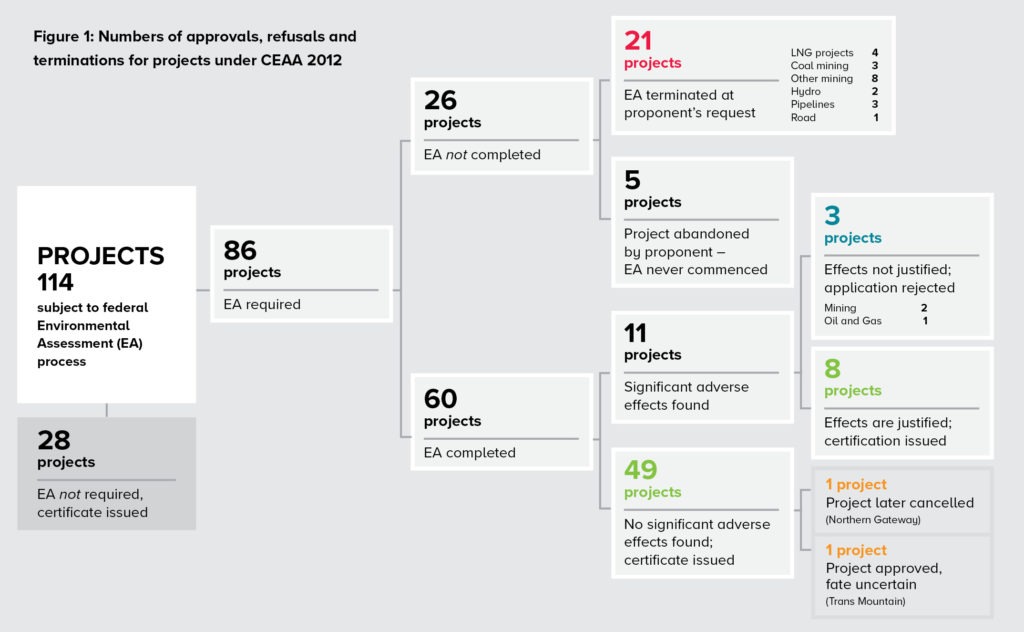 Hydro and roads, relatively quick. Coal and other mining, not so much.

The timeline varies substantially by project type. Hydro, roads and transmission projects all had an average timeline of 30 months or less. Pipelines averaged 33 months. Mining and coal project were around 50 months; and port projects averaged 69 months.

Some of this variation is due to the complexity of the project or its siting; some to the vagaries of the regulatory process; and some to the amount of public scrutiny that the project generates – a combination of objective and subjective issues, some of which are more easily dealt with than others. 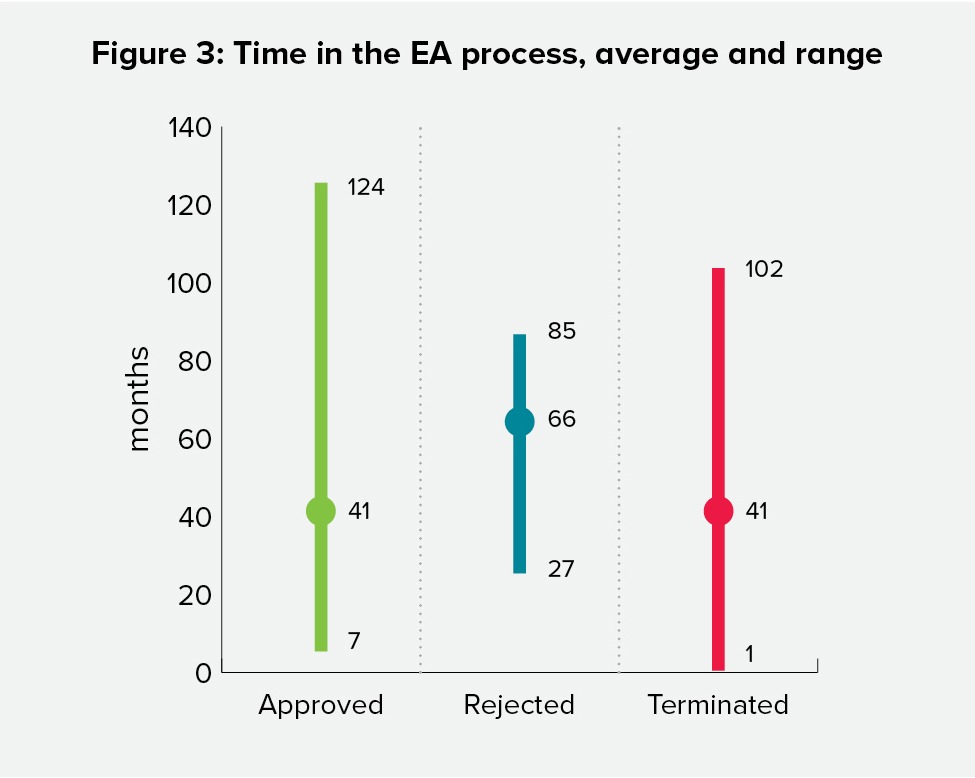 Are patterns of approval changing over time?

Finally, it is interesting to note how the patterns of project approvals, rejections and terminations may be changing over time. Figure 4 shows the date when projects were approved (green dots), rejected (blue dots) or terminated (red dots). (The orange dots represent Northern Gateway – which received approval and then had approval withdrawn, and Trans Mountain – which received approval which has not yet been enforced.) An increasing number of projects are being terminated rather than receiving approval. Is this due to changes in market conditions, Canadian competitiveness for investment, industry uncertainty, regulatory scope or other hurdles? Further analysis will help us uncover whether there are any true patterns in the data.

This analysis provides some preliminary findings about what happened to projects that entered the federal environmental assessment process under CEAA 2012. Yet it also raises many questions.

Over the next few months, the Canada West Foundation, in conjunction with partners at the University of British Columbia, will undertake a more robust analysis that will help us answer questions such as:

• What were the issues that caused projects to be rejected or otherwise not be built? Were these issues ones that could have been identified or addressed in advance of the EA process?
• What factors are associated with the length of time a project spends in the EA process?
• What were the reasons that led to projects being voluntarily terminated?
• Were projects more or less likely to succeed if they were subject to review by a panel?
• Where could the very long time frames have been reduced?

We welcome input and discussion on this topic – please let us know if you have something to say or contribute.