In a world where jobs are changing quickly, or being eliminated altogether, it’s more essential than ever for the people in Canada’s workforce to be able to “learn their way” into new or changing roles. The problem is that in Canada, more than 40 per cent of the workforce doesn’t have enough “learning-to-learn” skills to enable them to maintain stable and well-paying employment.

To learn easily, an individual must first master the basic skills: communicating well – through speaking and listening (language); understanding and using printed and digital material (literacy); and, managing basic arithmetic (numeracy). Written words only make sense if you understand at least some of the language, and basic reading skills are needed to understand, formulate and solve problems, including those that involve numbers.

Because learning is entwined in language, literacy and numeracy, improving these skills is critical if Canada wants a workforce that can thrive in the changing world of work. As it stands, much of the country’s workforce won’t fare as well as they could as jobs change or disappear altogether. That outcome could be improved if we – individuals, employers, training providers and governments – build on and expand proven methods for improving basic skills in adults, though education, training and workplace learning programs.

A broad range of research, including studies by global management consulting firms, e.g. Deloitte1 and McKinsey2, various institutions such as the Organisation for Economic Co-operation and Development (OECD)3 and World Economic Forum4, and for big employers like the Royal Bank of Canada5, have determined that work is being disrupted because of changing processes, globalization and the advance of artificial intelligence and robotics.

Robots have been replacing human workers for years. They can do the heavy, dirty, hard, repetitive and boring work previously done by humans – usually without errors and injuries. There is every reason to believe that this trend will continue – what can be done by machines more cheaply than by human labour, will be. While we do not yet know how many jobs will be fully or partially automated, the consensus is that there will be an even larger number of jobs for people who have learned how to work alongside the machines.

The studies usually conclude by saying that to survive – and thrive – in the new world of work, people need to learn continuously. Often, the discussion about learning ends there. But learning to learn – and to keep on learning – is only the starting point. While all three basic skills (language, literacy and numeracy) are needed for efficient learning, this brief discusses literacy – which correlates closely with numeracy.

Literacy is at the heart of learning. Research has shown that literacy:

• Is a prerequisite to learn and apply other skills at advanced levels.

• Is necessary for jobs that require technical skills and knowledge to be applied in non-routine ways.

• Is a better indicator of capacity to adapt, change and grow in an uncertain future, than measures that reflect past or present skills such as belonging to a particular occupation, or holding a particular credential.

• Is a better proxy for an individual’s capacity to learn than other measures, such as educational attainment (which often do not reflect the level of skills currently held or how these skills levels change over the course of one’s life).6

Without adequate levels of literacy skill, people either avoid learning or have difficulties when they have the opportunity to learn.

—
The shortage of ‘learning-to-learn’ skills

The level of literacy skill demanded by jobs has been rising. People need to have at least Level 3 literacy skills – the mid-point on the five-level scale for literacy – to do the work associated with 97 per cent of jobs created since 1997. At Level 3 and above, people can analyze, evaluate and create new information, which in turn is needed for problem solving and critical thinking. On the other hand, most people with skills below Level 3 can only retrieve information and apply it in routine, predictable ways. In Canada, jobs requiring Level 1 have disappeared, and as shown in Figure 1, there are only a few Level 2 jobs remaining. 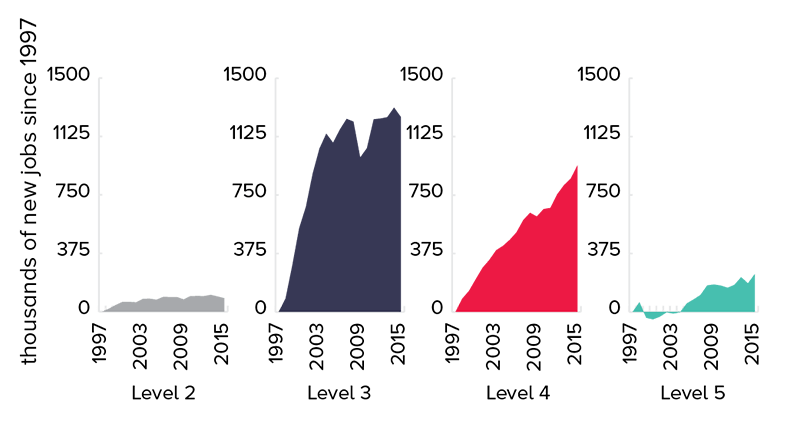 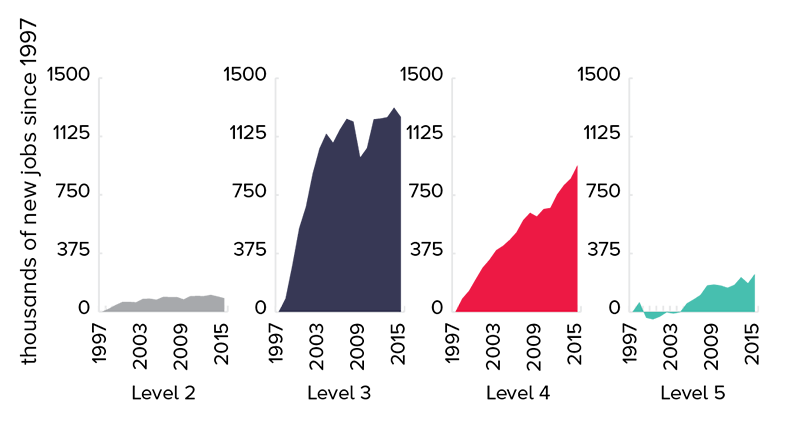 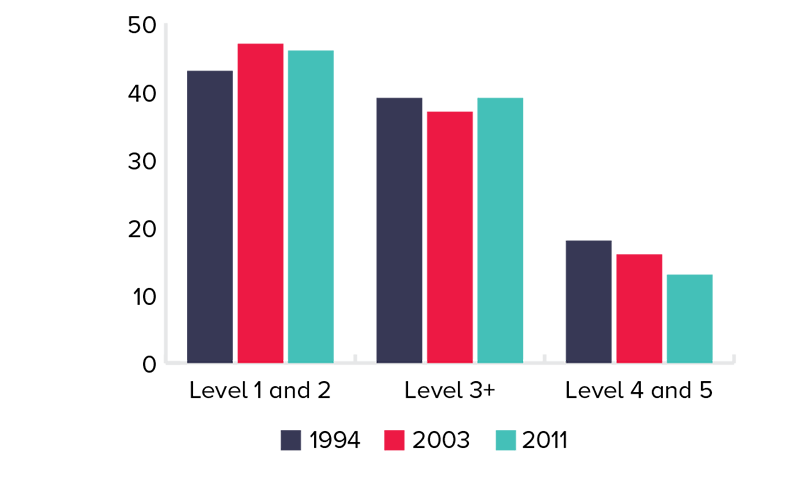 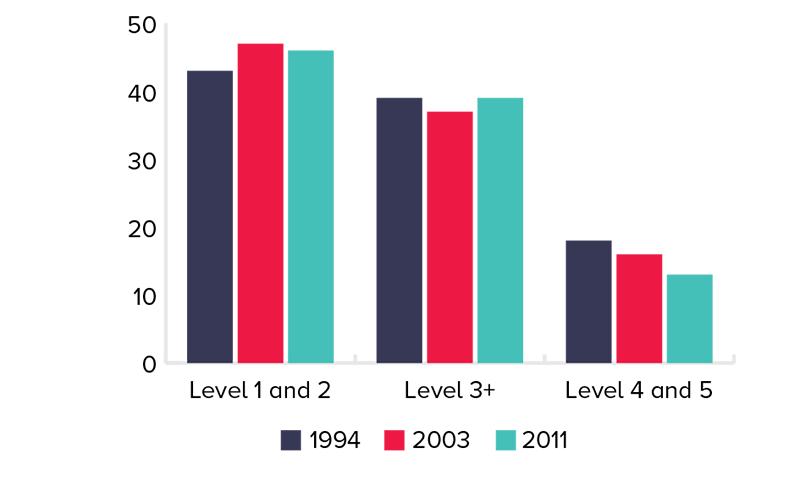 Figure 3 shows that people gain and lose skill from the time they leave the secondary education system. Most people tend to gain skill until age 35, and then most lose skill as they age. Research has shown that it is not aging itself that causes people to lose skills beyond age 35; many do, but most likely because they have not been challenged to maintain their skills by the jobs they have been doing.7 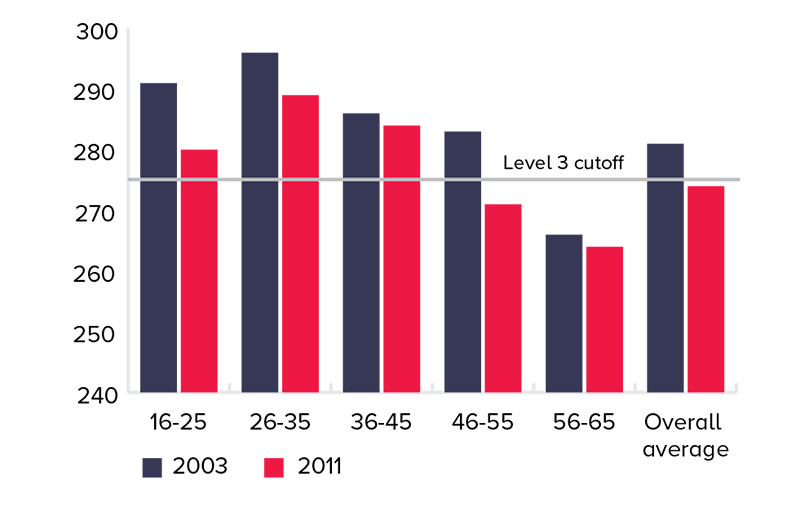 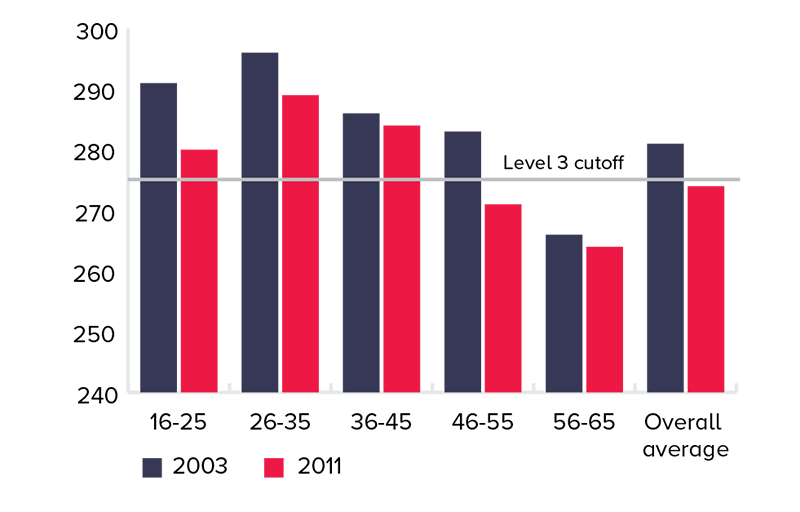 Adding to the problem is that, as Figure 3 also shows, average literacy scores were lower across all age groups in 2011 than in 2003. Skill loss is now starting from a lower level.

The usual method of improving the average literacy skills of the workforce, through higher-skilled younger generations replacing retiring lower-skilled generations, isn’t working anymore. Even among 16-25-year-olds, fewer than 60 per cent meet the Level 3 or above standard. 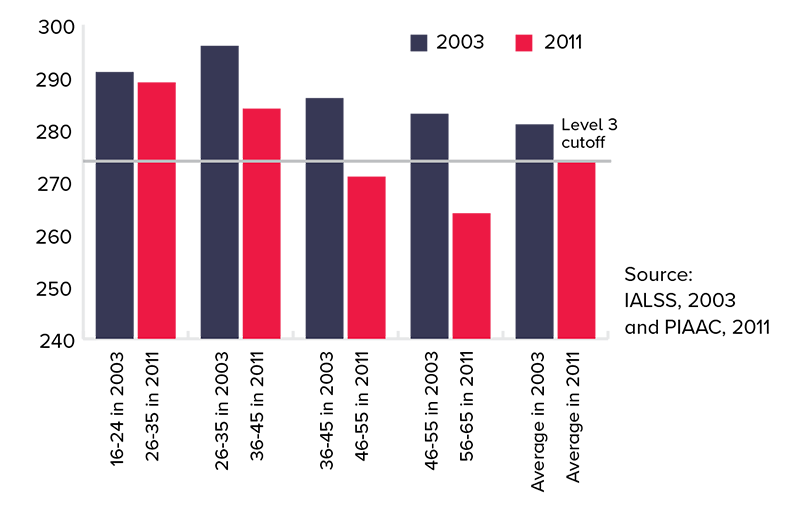 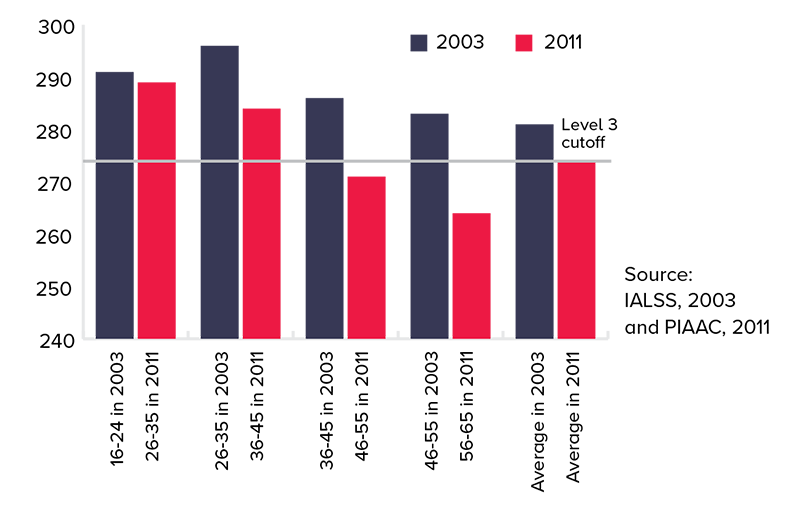 Too many young people leave Canada’s education systems with insufficient levels of “learning-to-learn” skills. This has to change. But, even if all students graduated with the required literacy skills, that would not guarantee they would still have the skills to learn later in life. While individuals have responsibility to build and maintain skills in adulthood, more needs to be done to ensure that working-aged adults have the skills to learn and thrive throughout their working lives – and beyond.

We recommend these strategies:

1. Literacy and other “learning-to-learn” skills be embedded into workforce education and training initiatives for both youth and working-aged adults who have low levels of skill. Recent research has proven that quality workplace training programs can quickly, reliably, and relatively cheaply help people with lower levels of literacy and other cognitive skills to improve their cognitive skills while learning skills directly related to their jobs. One study showed that this training increased employee retention, improved productivity and customer satisfaction and provided a return on investment of 23 per cent in the first year.8

2. Employers who are using a low-skill, low-wage strategy and who want to maintain or increase their competitiveness need to:

a) Increase the knowledge and skill intensity of their jobs by, among other things, increasing the level of critical thinking and decision-making required and reducing levels of supervision.

b) Start assessing the skills of job applicants with tools that reliably certify skills and competencies so they can make better hiring decisions – which will reduce skill loss and increase productivity.9

c) Invest in literacy, numeracy and problem-solving skill upgrading for current employees, by embedding it into other training.

d) Adjust work processes to ensure that skills gained through upgrading are put to use and do not stagnate or deteriorate.

To increase the speed at which these two strategies are implemented, supports are needed, including:

• Expansion of the federal-provincial job grants for offering training to new and existing employees.

• Government support for industry to build and implement competency frameworks which identify the levels of all skills and competencies required by the jobs in the economy – including language, literacy and numeracy.

• Requiring the federally funded Labour Market Programs, offered in the provinces and territories to lower-skilled workers and those who are unemployed, to embed basic skills in curricula.

• Mandating the new Future Skills Centre to include literacy and other learning-to-learn skills in its research.

As jobs change or disappear, most of Canada’s workforce will need to upskill, reskill or develop skills over the next few years. Fully 40 per cent of Canada’s workforce will not find this learning easy because they don’t have enough “learning-to-learn” skills. Fortunately, there are ways to incorporate basic literacy and numeracy skills into programs offered by education and training providers. The time to get started on this is now – basic skill levels are falling at a time when we need them the most.

Where the data comes from

The analysis in this report relies on the data from three comparable Organisation for Economic Co-operation and Development (OECD) international adult literacy surveys conducted in the last 25 years. The data has been adjusted for the changes in the methodologies.

Canada oversampled the population in each survey to ensure they received statistically accurate information.

3 Putting Faces to the Jobs at Risk of Automation. OECD. 2018

5 Future-proof: Preparing young Canadians for the future of work. Brookfield Institute for innovation and entrepreneurship. March 2017.

The Economic Benefits of Literacy: Evidence and Implications for Policy, CLLRNet and Competencies at age 14 and competency development for competent learners, study sample. (2004)

9 For an example of such a tool see Vametric’s Valid-8 tool at www.vametric.com