A new North American trade pact will not protect Canadian businesses from the threats posed by a president willing to capriciously misuse executive power to ignore or override trade rules like those in the North American Free Trade Agreement (NAFTA). Canada has recently experienced some, but neither all, nor the worst, of what a U.S. president can do to unilaterally impose tariffs or take other measures to block trade. Even with a new North American trade agreement, unchecked unilateral executive power remains the biggest trade threat that Canada faces.

Rather than sitting back after celebrating a new North American trade agreement, Canadian businesses and policy-makers need to take proactive measures against the continued threats posed by unilateral action by U.S. President Donald Trump. These include:

The three threats that Canada faces and will continue to face

The U.S. is Canada’s largest trading partner by far – any trade action from the Americans can affect more than 75 per cent of Canada’s exports, and at least the 85 per cent of Canadian small and medium businesses which export only to the U.S. Even with a new North American trade agreement, Canada will continue to face three principal threats from unchecked executive power in the U.S.

a) Limited statute: The national security tariffs on steel and aluminum with which Canadians are most familiar is an example of using a limited statute. The “limit” on presidential power to impose these tariffs is that they first require that the Department of Commerce conduct a study to determine if importation of a product diminishes or threatens U.S. security. For steel and aluminum tariffs, this took almost a year. The process also allows time for U.S. businesses to petition the U.S. government agencies administering the tariffs for exemptions for products on the tariff list. Foreign governments such as Australia and Argentina were also able to use this time to negotiate alternatives to the tariffs. The original steel and aluminum tariffs on Canada have been joined by tariffs on autos and auto parts, and uranium with the potential for further near-term expansion into critical materials and unlimited potential expansion in the longer-term.

b) Unlimited statute: Trade actions under unlimited statutes give the president leeway to act almost immediately and without interference from Congress. In May 2019, Trump used the International Emergency Economic Powers Act (IEEPA) to declare an emergency on the U.S. southern border, which allowed him to threaten immediate tariffs on all products entering the U.S. from Mexico. While there was debate within the administration, not to mention Congress, about whether an actual emergency existed, there was even wider concern and opposition, including in the president’s own party, over the threatened tariffs. None of this deterred, much less slowed, the president.

As is fairly standard in trade disputes, when the U.S. imposed tariffs on Canadian steel and aluminum in March 2018 without sanction from a body like the World Trade Organization (WTO), Canada viewed the tariffs as unjustified and responded with retaliatory tariffs on imports of U.S. goods. Unfortunately, some of these imported goods are inputs sourced from U.S. firms for Canadian production. Retaliatory tariffs are designed to inflict maximum political pain, as such, items and sectors not involved in the original dispute get dragged in. As the dispute over steel and aluminum tariffs dragged on, Canada threatened to expand its list of items on which it charged retaliatory tariffs.² Businesses that were not involved in the original dispute and that did not think it would involve them were blindsided when critical inputs that they sourced from U.S. firms were suddenly slapped with or threatened with retaliatory tariffs. Canada tried to balance preventing harm to Canadian business with inflicting pain on the U.S. But there are only so many products that can be put on a retaliatory list.

Even though the president did not follow through on his threat to use the IEEPA to immediately impose tariffs on Mexico, the announcement that he was contemplating doing so had a chilling effect on the Mexican economy, including a plunge in the value of the Mexican peso. It also demonstrated that the U.S. president has far-reaching, unchecked power and that he is willing to use it even if it threatens other U.S. self-interests. While Canada has trusted basic self-interest to limit use of tariff power by a president, that isn’t the case any longer. This demonstration of the power at the president’s disposal, the lack of constraint on its use and the president’s willingness to use it, all gives real power and effect to any threat – or in Trump’s case, tweet – by the president. The mere threat of action is itself a powerful tool that the president appears increasingly willing to use.

What has Canada been able to do?

Canadian attempts to negotiate resolution of the use of the limited statutes have not been successful. Trying to circumscribe their use in the new North American agreement has not fared better.³ For national security tariffs on steel and aluminum, Canada’s negotiated settlement with the U.S., which effectively suspended but did not eliminate the tariffs as claimed, has actually left Canada worse off.?

In the new North American trade agreement, Canada and Mexico have negotiated inclusion of side letters committing the U.S. to guarantee exclusion from tariff of 2.6 million passenger vehicles imported from Canada on an annual basis; this is roughly 1 million more units than Canada exported to the U.S. in 2018. The agreement contains an additional side letter committing the U.S. to provide Canada a 60-day grace period from the day of imposition of new national security measures on any other good. This is slightly shorter than the grace period that the U.S. had, indirectly, given Canada before imposition of the steel and aluminum tariffs.

Canada’s protest of the U.S.’ use of national security tariffs on steel and aluminum at the WTO was withdrawn when a deal to eliminate, or pause, the tariffs was reached. But even if the complaint had gone ahead, a decision would likely have taken at least 18 months to two years, not including any appeal.

In effect, Canada has only three protections from unilateral action by the president and these apply only to national security tariffs: 1) the 60-day speed bump on new measures and 2) generous quota of auto exports negotiated in the new North American trade agreement; and the 3) slight protection on tariffs on petroleum.

This is thin gruel for the limited statutes. For the unlimited statutes like the one used to threaten immediate across the board tariffs on Mexico, Canada has no real protection.

What more can Canada do?

Canada has only been able to react to U.S. presidential actions on trade. Given Trump’s behaviour – and lack of willingness (or ability) of the U.S. Congress to constrain him – Canada needs to take a concerted proactive approach.? This involves three steps.

1) Educate businesses about the risks of presidential action to allow them to prepare. The federal government can issue widespread warning of impending Section 232 and 301 investigations. The government and foreign trade risk insurance agents can also develop new tools to rapidly provide insurance in response. Businesses will need to develop contingency plans for new surprise tariffs or counter-tariffs. For actions under the limited statutes, those with investigations or other delays before imposition of tariffs, businesses will have time to prepare. Figuring out likely counter-tariffs that Canada would impose on U.S. goods can be informed by recent precedent. Informing Canadian businesses of the threat will help build support in Canada for continued ramped up government engagement.

2) For limited statutes, the U.S. has an exemption process in which industries can appeal for relief or exemption from tariffs for critical inputs. These appeals are made by U.S. companies. Working now to identify potential advocates for Canadian interests, U.S. firms that rely on Canadian inputs and thinking through how to make these firms aware of the risk and mobilize and support them to file appeals is needed.

3) More broadly, Canadian federal and provincial officials along with private sector counterparts need to expand and transition outreach and advocacy efforts in the U.S. that were originally created to push for the new North American trade agreement. The purpose would be to form coalitions to demand exemptions for Canada from use by the president of any of the statutes.

The combination of these measures should mitigate potential damage from presidential tweets or threats of use of executive power over trade with Canada. The power of the threat lies in its ability to play into fears of uncertainty that panic markets. By taking and advertising these measures, Canada can provide some assurance to markets that it has thought through and is prepared for any presidential action. While this cannot remove all uncertainty, it would go a long way to filling the current information vacuum, replacing fear of the unknown with a viable counter-narrative and data. 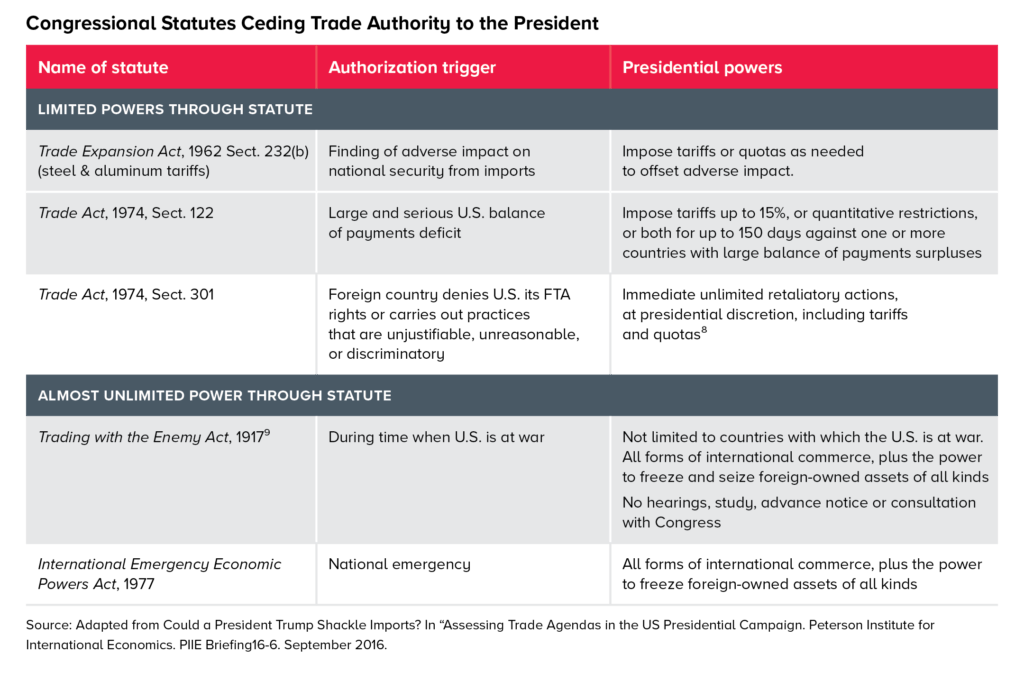 1 For a full description see: Could a President Trump Shackle Imports? In “Assessing Trade Agendas in the US Presidential Campaign. Peterson Institute for International Economics. PIIE Briefing16-6. September 2016.

3 At one point, Mexico had secured agreement from the U.S. on a broader constraint to the use of these limited statutes. That agreement did not carry over to the final agreement between all three parties.

4 While the agreement eliminates the tariffs, it allows the Americans to reimpose them if steel and aluminum imports “surge meaningfully beyond historic volumes over a period of time”. The U.S. may reimpose the tariffs and if it does so Canada agrees to limit its tariff retaliation to the same products upon which the U.S. imposes sanctions. Neither “surge” nor “historic period” is defined in the agreement, leaving the U.S. to define these terms as it sees fit. The U.S. now only has to demonstrate that a surge, which it will define, has occurred. It no longer has to demonstrate that there has been damage to U.S. business. This makes re-imposition of tariffs easier than the original imposition. And the surrender of the right to impose wider ranging retaliatory tariffs is a self-explanatory loss.

7 There have been two measures introduced in the Senate to constrain the president and a third is circulating. None have gone anywhere, and the current measure lacks wide-spread support and clearly lacks veto proof support.

8 This statute was used to by President George W. Bush to impose tariffs of steel imports in 2002. Canada and Mexico were exempted from these tariffs due to protections in NAFTA. It is highly unlikely, but not impossible, that Trump could use these tariffs with Canada or Mexico. They are mentioned in the table to present a fuller picture of the statutes available to the president.

9 If it seems farfetched to imagine Canada being subject to this provision, it already has been. In 1971, U.S. President Richard Nixon undertook a series of economic measures called the Nixon shock. These included a 10 per cent surcharge on imports to the U.S. Canada was not exempt from the surcharge. Nixon cited the Trading with the Enemy Act as authorization for his actions. So, in effect, Canada has already seen the TWEA used against it. Interestingly, the use of the TWEA to place a surcharge on imports was upheld by U.S. courts.