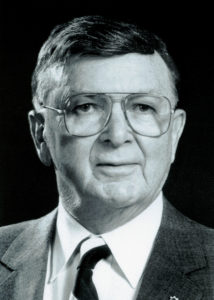 Arthur J. E. Child was born in Surrey, England, on May 19, 1910. At the age of three, he emigrated with his family to Canada, residing in Gananoque, Ontario. He graduated from Gananoque High School at the top of his class, and enrolled at Queen’s University.

It was here that Child had one of the defining experiences in his life. He joined the Canadian Officers Training Corps at Queen’s, which began an interest in military matters and history that would continue for the rest of his life. After graduating from Queen’s, Child went to work for Canada Packers, bringing with him ideas on authority and responsibility honed by his time in the military. These ideas proved successful at Canada Packers, and no doubt helped propel Child from office clerk to Vice-President and Secretary/Treasurer.

In 1960, Child became President and CEO of Intercontinental Packers. Six years later, he was asked to become the President and CEO of Burns Foods, a company facing bankruptcy. Under Child’s leadership, the company turned around and began to thrive again. Child remained CEO for three decades.

Arthur Child was known for his generosity, both financially and in his willingness to give people the benefit of the doubt. Former President of the Canada West Foundation David Elton said this about him:

“Mr. Child’s interest in the well-being of the community spanned almost every aspect of community endeavours, from the arts to poverty, from politics to education and the military. His breadth of interests and involvement in the Calgary community, in Canada and throughout the world never ceased to amaze me.”

Child was dedicated to a stronger Western Canada, a goal he pursued as not only a founder of the Canada West Foundation, but by chairing the board from its inception until 1994.