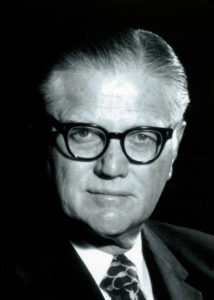 Frederick C. Mannix is known as one of Canada’s great builders. Born Oct. 21, 1913 in Edmonton, AB, he began working for his father’s contracting business at an early age, becoming a partner in 1935. When his father’s failing health led to the sale of the business in 1942, the younger Mannix maintained on ownership position in the company, which became a Canadian subsidiary of Morrison-Knudsen Construction Company of Boise, Idaho.

Through this company, Mannix contributed to many of Canada’s infrastructure projects throughout the 1940’s, such as highways, pipelines, mines, dams, railways and airports. Through these works he established his legacy as a great builder. In 1951 Mannix brought ownership of the company back to Canada, under the banner of Mannix Construction.

Having established one of Canada’s largest construction companies, Mannix began to diversify, creating the Loram Group of Companies and Manalta Coal, Ltd., in his time Canada’s largest coal producing company. The Loram Group proceeded to create Pembina Pipe Line Ltd., which grew to become the Pembina Corporation, the largest owner/operator of crude oil and liquids feeder pipelines in Canada.