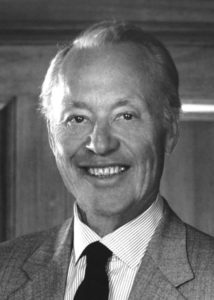 Hon. James Richardson, PC (born March 28, 1922 in Winnipeg, Manitoba, died May 17, 2004) was a Canadian Cabinet minister under Pierre Trudeau, and a Winnipeg businessman.

After attending Queen’s University in Kingston, Ontario, Richardson enlisted in the Royal Canadian Air Force. He served as an anti-submarine pilot based in Iceland and Labrador during the Second World War. Following the war, Richardson joined the family owned grain company, James Richardson and Sons, and became Chief Executive Officer and chairman in 1966.

He left the company to enter politics, winning a seat in the Canadian House of Commons in the 1968 election as the Liberal Member of Parliament for Winnipeg South. Richardson easily defeated future provincial cabinet minister Bud Sherman, his Progressive Conservative opponent.

Richardson was appointed to the cabinet of Prime Minister Pierre Trudeau as a Minister without portfolio on June 6, 1968. He also served as acting Minister of Transport for five days in early 1969, and was promoted to Minister of Supply and Services on June 5 of the same year. From November 27, 1972, until October 12, 1976, he was Minister of National Defense.

Richardson was re-elected without difficulty in the 1972 election. In the 1974 election, he defeated future Premier of Manitoba Sterling Lyon by only 1,266 votes.

Richardson was known as a “business Liberal”, on the right wing of the party. He resigned from Cabinet in 1976 to protest the government’s implementation of official bilingualism. In 1978, he left the Liberal caucus entirely and crossed the floor (by actually physically crossing it) to sit as an Independent MP for the remainder of his term. He was not a candidate in the 1979 election.

In 1987, Richardson announced his support for the newly-created Reform Party of Canada. He was the brother of Agnes Benidickson, former Chancellor of Queen’s University and brother-in-law of former Liberal MP and Cabinet minister William Moore Benidickson.