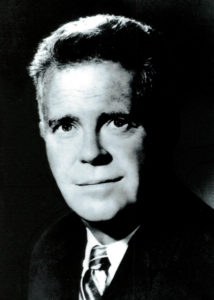 George Maxwell Bell (1912-1972) was an entrepreneur and devoted philanthropist who thrived on taking risks.

After graduating from McGill University with a degree in commerce in 1932, Bell worked a variety of jobs such as labourer and prospector in British Columbia, until he was able to secure a contract providing railway ties to the Canadian Pacific Railway. With the profits from this he made his first major investment, in a dormant Turner Valley oil company.

In 1935 Bell became the business manager of the Albertan, a then-ailing newspaper of his father’s. By 1943 he was able to purchase the paper outright, and within two years he had repaid the $500,000 of debt it has accumulated.

1947 saw Bell’s earlier Turner Valley investment pay off, as an oil boom in the region brought him his initial fortune. In a similar initiative, he would later become one of the original owners and developers of the Alberta Eastern Natural Gas Company.

A noted athlete, Bell also had several interests in the sports world. He co-owned a horse racing operation with Frank McMahon, whose stable’s colours were a familiar sight across North America and in Europe. For a time Bell was part owner of the Vancouver Canucks, and was the first chairman of Hockey Canada.

Max Bell was devoted to philanthropy. He gave generously and repeatedly to various boys’ camps, the Salvation army, and Msgr. Athol Murray’s Notre Dame College in Wilcox, Saskatchewan, as well as anonymously donating countless university scholarships. He was often quoted as saying, “The only time money is important is when you haven’t any. Once you have it, however, you must accept the responsibility to make the best use of it and to ensure that those who become dependent on you for a livelihood are not injured by your transactions.”

This spirit of philanthropy is carried on my the Max Bell Foundation, which since its inception in 1972 has given out over $65 million in grants.