What is the regulatory compact?

What is the regulatory compact? The “regulatory compact” is a term that was developed in the early 1900s. It describes the situation in which the regulator grants a for-profit company a protected monopoly to provide services in exchange for commitments around supply and price. The regulatory compact has traditionally been applied to utilities – essential commodities such as electricity or natural gas. It is intended to create a balance between the competing economic interests of energy providers and energy consumers (see Figure 1). 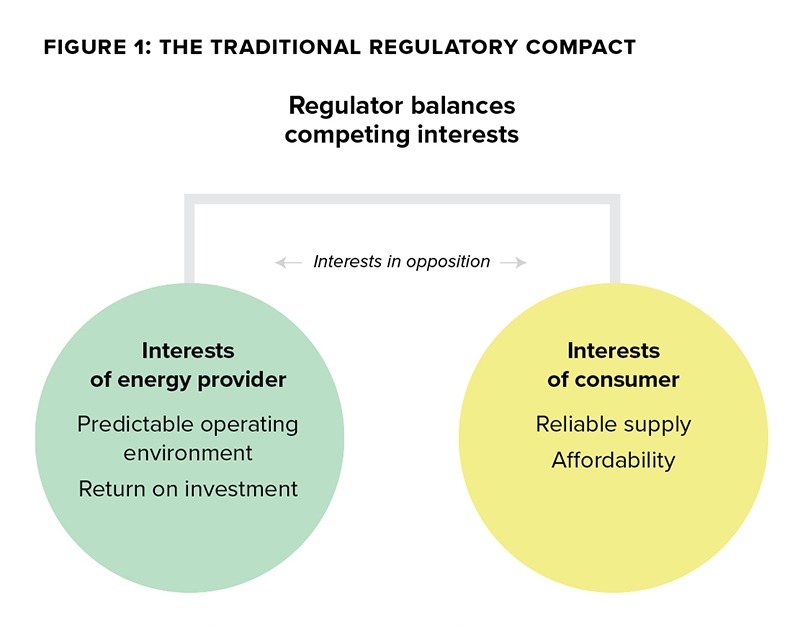 Over the last few years, the idea of the regulatory compact has come under increasing criticism. Some critiques focus on the need for change due to evolving business models and changing markets for electricity.¹ ² Other critiques, however, focus on the misalignment of the compact with broader societal objectives that lie outside of financial considerations.³ ?

Perhaps it is time for the regulatory compact to be reframed more broadly – both in terms of what types of energy providers and regulators it refers to, and what the desired outcomes are. After all, the public interest is broader than just reliability of supply and price. It includes outcomes such as public health and safety, environmental impacts, Indigenous rights, economic prosperity and decarbonization. These outcomes are both influenced by the for-profit activities of energy companies, and are mediated by energy regulators. And they don’t just apply to utilities such as electricity or natural gas.

Figure 2 shows a different way of framing the regulatory compact. While maintaining distinct interests between producers and consumers, it also identifies areas of shared concern, and places the regulator in the position of optimizing for desired outcomes, rather than as an arbiter of competing interests in a monopoly setting. This broader reframing means that the regulatory compact applies also to those regulators that have more than just regulated utilities in their remit, such as the Alberta Energy Regulator or New Brunswick’s Department of Energy and Resource Development. 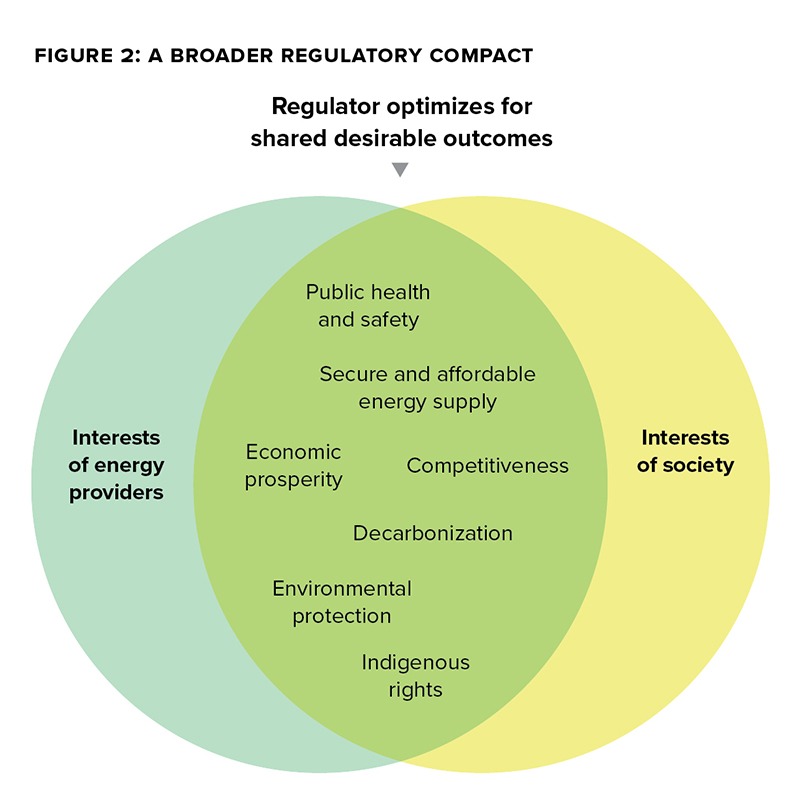 A changing regulatory compact is not the only challenge that energy regulators currently face. The energy sector is transforming rapidly, as are the political and social frameworks in which they operate. The section that follows highlights five key challenges that energy regulators will need to navigate – and find solutions to – as they move into an uncertain future.

Today, possibly more than ever before, the regulator is disputed in its role as a technical expert. This change has occurred for a number of reasons: the internet enables easy access to information – correct or incorrect; there is a general societal trend of declining trust in experts and institutions; and in some places, the reputation of the regulator has been under siege. According to the Edelman Trust Barometer, the trend of declining trust in institutions has been growing over the past few years, and doesn’t show signs of abating anytime soon.?

For energy regulators, this difficulty is compounded by the need to work closely with regulated energy companies. On the one hand, many societal goals can best be accomplished through a close partnership with industry. On the other hand, there is a public expectation of what a regulatory experience should look like; and anything that appears too “easy” or too “cozy” may undermine the legitimacy of the regulator.

Over the next few years, energy regulators will need to find novel ways to build public trust and confidence. But energy regulators aren’t alone in this – other regulators (including financial, telecommunications and others) and other institutions such as the media and the government more broadly – are under the same pressure.

The regulator as part of the innovation ecosystem

The pace of innovation is accelerating across the energy sector, and is a major force that regulators will need to figure out how to handle in the very near future. As stated by the World Economic Forum, “an innovation tsunami has the potential to wash over the world’s energy systems. With it, disruption and transformation throughout the world economy could be as profound as the shocks of electricity and oil a century ago.”?

The regulator is an essential part of this innovation ecosystem – and can play either of two roles (and even sometimes both at the same time): deterring and stifling innovation, or driving and stimulating it.

In practice, there are a number of factors that influence the extent to which a regulator stifles or stimulates energy innovation. These include:

> The culture of the regulator: whether is it prescriptive vs. outcomes-oriented; whether it is willing to take risks vs. fear-driven

> If innovation is part of the regulator’s legislative mandate

> The degree of trust between the regulator and the regulated companies

> The degree of public and government support

> Sufficient resources (money, personnel) in the regulator to manage the additional workload required to assess innovation

Innovation is particularly important for achieving a number of the shared objectives shown in Figure 2 – in particular, decarbonization and environmental protection. Figuring out how to manage innovation thus comprises a critical role for the regulator under the new regulatory compact.

Decreasing greenhouse gas (GHG) emissions has become an overwhelming priority – and one that is being managed through a combination of market controls (such as carbon pricing and cap-and-trade schemes) and command-and-control approaches (like clean fuel standards).

Canada’s energy regulators play an important role in achieving this objective; but the role also comes with substantial challenges.

How, for example, can regulators incent energy solutions that increase local production and decrease consumer demand for hydrocarbons – such as solar power, net metering, or waste heat to power – without causing undue burden for remaining utility customers or initiating a “death spiral” for the utility? How do regulators best work with other arms of government to ensure that different approaches to decarbonization are complementary and fair?

One of the challenges that has faced energy regulators in Canada in recent years is being stuck in the middle of policy debates that the regulator is not set up to handle.

But what happens when clear policy has not been set at the government level? It has resulted in highly contentious, protracted and disputed proceedings, where the regulatory forum has become the de facto site for policy debates. Not only has this been frustrating for all involved, it can undermine public trust in the regulatory process.

While there is no clear and easy solution to this dilemma – at least not one that can be implemented by the regulator alone – this problem will continue to plague the energy regulation space for as long as the policy vacuum exists.

The value of data

Data represents a new commodity that increasingly being produced alongside energy resources. And it is one that brings up connected issues of privacy and value.

The communications infrastructure associated with the electricity grid – and also other energy end-uses – is increasingly collecting more and more data about the energy use of individuals, households and businesses. This data is valuable to the utility companies, but also to third-party providers, regulators, hackers, data scientists and others.

As noted in a report produced by the Interstate Renewable Energy Council, “In developing rules for access to data, regulators will need to balance the importance of ensuring cybersecurity and protecting consumer privacy with potential consumer benefits of permitting third-party access to such data, many of which have been used to justify investments in AMI and other technologies in the first place. These rules should reflect regulators’ modern conception of utilities’ role and the public interest within the updated regulatory compact.”?

In a changing energy landscape, the role of energy regulators is also evolving. This brief has highlighted some of the key challenges that regulators will have to negotiate over the next few years. These challenges can best be faced by framing the regulatory compact in a new light – one that focuses on the shared values of industry and society that can lead to desirable outcomes, rather than oppositional interests of energy producers and consumers.

¹ Black & Veatch. The new power grid: obligations in the era of change. 2018. https://www.bv.com/insights/expert-perspectives/new-power-grid-obligations-era-change