Because all focus has been on COVID-19 lately (and understandably so!) we thought we would do something a little different for this Brief. We’re looking into the economic impact of COVID-19 on China, and how this could impact Canada-China trading relations.

IN THIS EDITION: A deep dive on the impact of COVID-19 on Canada’s economy, China’s economy and what it means for trade between the two countries.

Before we dive into the impact of COVID-19 on our trade, it’s important first establish why China is so economically important to Canada in the first place.

Beyond trade in goods is the highly valuable trade in services, post-secondary, and tourism industries. Chinese students bring in about $5 billion dollars for post-secondary every year. The University of Alberta’s China Institute Investment Tracker tells us that, in 2019, China invested more than US$3 billion in Canada.

Particularly Important for the West 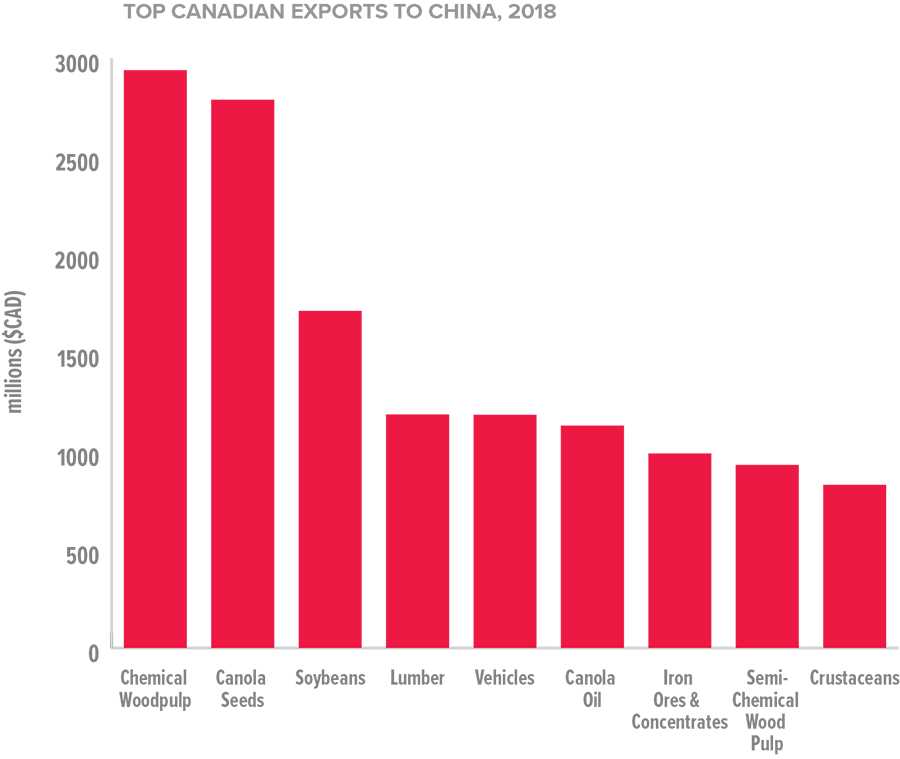 Some Canadian agricultural exports rely on China as their largest market. For example, in 2018, 60% of Canadian soybeans were sold to China; 53% of flaxseed; 48% of canola seeds; and 75% of barley.

Of course, adding to the question of the impact of COVID-19 on Canada-China trade, is the fact that things have already been off the rails with China for more than a year. After Huawei CFO Meng Wanzhou was arrested in Vancouver in December 2018, Canada has faced increasing pressure on several fronts, including trade. This has included a partial ban on canola seeds and soybeans, and a temporary ban on beef and pork.

The Chinese economy was pummelled by COVID-19 in January and February of this year. Industrial output fell 14%; retail sales fell 21%; and investment in fixed assets fell 25%. Chinese economic growth was expected to be 5.7% for 2020, but some are downgrading that to 2.4%. China’s exports fell 17% in January and February. Other signs of a widespread slowdown in economic activity in China include depressed shipping levels and low levels of pollution.

Importance of China to the Canadian economy

As the world’s second largest economy, and Canada’s second-largest trading partner, China holds significant importance to Canada. While Canada is still far more closely tied to the United States, as China put pressure on Canada throughout 2019 it became obvious that China has the ability to make waves for the Canadian economy based on decisions it makes.

COVID-19 has significantly impacted the Canadian economy, particularly with the drop in oil markets due to reduced demand and the Saudi Arabia-Russia price war. Western Canadian Select dropped to $9.19 a barrel on March 18, the first time WCS has dropped below $10 a barrel. RBC is forecasting a recession in the coming months with 2.5% decline in the second quarter and 0.8% decline for third quarter. The TSX did see a 400 point gain on Thursday, March 19, even as the Canadian dollar fell to its lowest point since 2003.

In comparing February 2019 with February 2020, the total accumulated traffic in the Port of Vancouver dropped 11.8% with exports down 13.1% and imports down 10.7%. With the spread of the virus to Canada, ports in B.C. are taking steps to mitigate supply chain impacts including increased cleaning, reducing travel, and implementing work-from-home options when possible.

The United States is assessing the use of anti-virus controls on all import and export goods from China. It is not yet clear what the impact of these controls will be on the amount and timeliness of manufacturing at Chinese plants as they rely on materials from the United States to make these goods.

For Canada, this could mean less imports from China for consumer goods, compounding the reductions already seen at the beginning of the month.

In terms of Canadian exports to China, COVID-19 is exacerbating commodity transportation issues from the CN rail strike in November 2019 as well as blockades in February of this year.

The Canadian government sent 16 tonnes of medical personal protective equipment to China at the beginning of February. The Chinese government responded with appreciation showing medical diplomacy as a possible tactic to repair China-Canada relations but, as we discuss below, this is unlikely. A Montreal-based medical research lab with experience during the SARS and Ebola outbreaks offered help to Chinese scientists in mid-February. Researchers at Canadian post-secondaries have since joined the effort, with the University of Calgary receiving funding from the federal government for COVID-19 research.

Even with medical support during the crisis, the Ambassador to China has said there is still a chill in Canada-China relations. While the Chinese government has refused to release Canadian detainees Michael Kovrig and Michael Spavor amidst the pandemic, Kovrig was allowed to call his sick father last week.

Chinese Ambassador to Canada Cong Peiwu has said that the Special House of Commons Standing Committee on Canada-China relations has “no right” to ask him to appear before it.

• Some argue that this would give China a chance to share “their side” of recent tensions with Canada.

The House of Commons National Security and Intelligence Committee is saying that China, and Russia, are increasingly conducting “significant and sustained” foreign interference in Canada, trying to influence media, politicians, academics and students.

In 2018, Chinese students ranked second at 24.98% for proportion of international students at Canadian post-secondary institutions (PSIs). In 2016, Global Affairs Canada estimated that international students contributed $15 billion to the Canadian economy annually, contributing $12.8 billion to Canada’s GDP. When China threatened to pull students from Canadian universities over diplomatic tension in 2019, Moody’s Investors Services predicted that the largest institutions in Canada would experience revenue problems.

Canadian PSIs are looking at ways to allow Chinese students to meet entrance requirements for the upcoming academic year. Manitoba universities are assessing applications from Chinese students on a case-by-case basis as English language tests and semesters were cancelled in China due to the coronavirus outbreak.

As the number of cases in Canada increase, travel restrictions tighten, and online learning rolls out for Canadian post-secondaries, it is unclear what the upcoming academic year will look like for Canadian post-secondaries and their students, including those from China. The Canadian government has said that the transition to online learning and extension of semesters will not impact current student visas.

China is opening factories outside of the outbreak centre in Hubei and working to increase production. It is estimated that 62% of businesses in the Hubei region and 72% of businesses outside the region are resuming activity.

Economists are predicting a sharp rebound for the Canadian economy as early as the summer or by the end of the year depending on how quickly the virus is contained. Export Development Canada is predicting 0.4% growth in 2020 and 3.8% growth in 2021. The oil and gas sector is still predicted to have a slow recovery even if other sectors experience a bounce back. There are reports that the Canadian government is preparing a multibillion dollar bailout for the oil and gas sector.

Eyes are on the US-China trade relationship with the measures the US government is bringing forward as well as China’s ability to offer aid and supplies to other countries while the US is occupied with the crisis at home.

• Some Chinese high school students in Canada and their parents are saying that some Canadian private high schools are taking advantage of them by not properly teaching them English and then inflating their grades to try to get them into university.

• The China Institute at the University of Alberta released their second media monitoring report: it is a mass data analysis of China in Canadian newspapers from May 2018 to July 2019. The authors found that there were “significant shifts in the amount, topics, and tone of coverage since the beginning to the middle of 2018. … Coverage of trade related issues increased by seven times, with the ongoing China-U.S. trade war as well as the export restrictions set on some Canadian goods by China being frequently discussed. China-Canada diplomacy also featured more prominently.”

• Canadian newspapers most often used “conflict” and “unpredictable” to frame their coverage of China, but also “rising,” “declining,” and “opportunity.”

• This is a fascinating piece of research – we highly recommend taking a look!

• The New York Times has a piece on “astronaut families” – families that live in Vancouver but one parent routinely flies back to China (usually, sometimes it’s somewhere else in Asia) for long periods for work.