Minister of Foreign Affairs François Philippe-Champagne has announced that Canada is walking away from free trade agreement (FTA) talks with China. Chinese media has said that freedom for Meng Wanzhou is more important than a FTA. The news does not come as a surprise given current tensions in the relationship. For Western Canada, which is responsible for close to two-thirds of Canada’s exports to China, this means continued uncertainty hanging over the heads of farmers and others. It’s a situation not shared by Americans who continue to benefit from much more than just the purchase agreements in the U.S.-China phase one trade agreement. Watch for our upcoming CWF paper on resolving non-tariff barrier issues in agricultural trade with China for an explanation and ideas as to what Canada can do. Check out a sneak peek below.

China has banned German pork imports after African swine fever (ASF) was detected in German pork with seven new cases found this week. Canada could potentially gain from this, however, the Maple Leaf Foods plant in Brandon, Man., is still halting pork shipments to China due to a COVID-19 outbreak at the plant.

ASF has hit Chinese producers hard, which has caused a serious disruption to global pork sectors. For more on this issue, read this piece from Alberta Farmer Express.

Amid COVID-19 and ASF concerns in the animal protein sector, peas and lentils show promise. Beyond Meat has a deal to open a facility near Shanghai and new Chinese plant-based food startups have emerged. Experts also see China is a strong export opportunity for this sector, especially as India maintains its 50 per cent tariff on Canadian peas and recently established a 30 per cent tariff on Canadian lentils. China has maintained steady imports of peas and lentils despite trade tensions.

The Canadian International Trade Tribunal (CITT) is following up on a complaint and reviewing the federal procurement contract granted to Chinese company NucTech. The deal would mean that NucTech scanners would be installed and operated at Canadian embassies.

In an upcoming report from the Canada West Foundation, Carlo Dade, director of the Trade and Investment Centre, and Sharon Sun, trade policy economist, take a look at agriculture and how non-tariff barriers and the pandemic have affected exports to China. Despite the current bilateral dynamic the impact of COVID-19 had on demand, supply chain woes and base effects, Canadian agricultural export to China is expected to regain momentum in 2020 from the 2019 decline. Q1 and Q2 of 2020 has already seen $1 billion or 27 per cent growth compared to Q1 and Q2 of 2019. Stay tuned for more on this report! 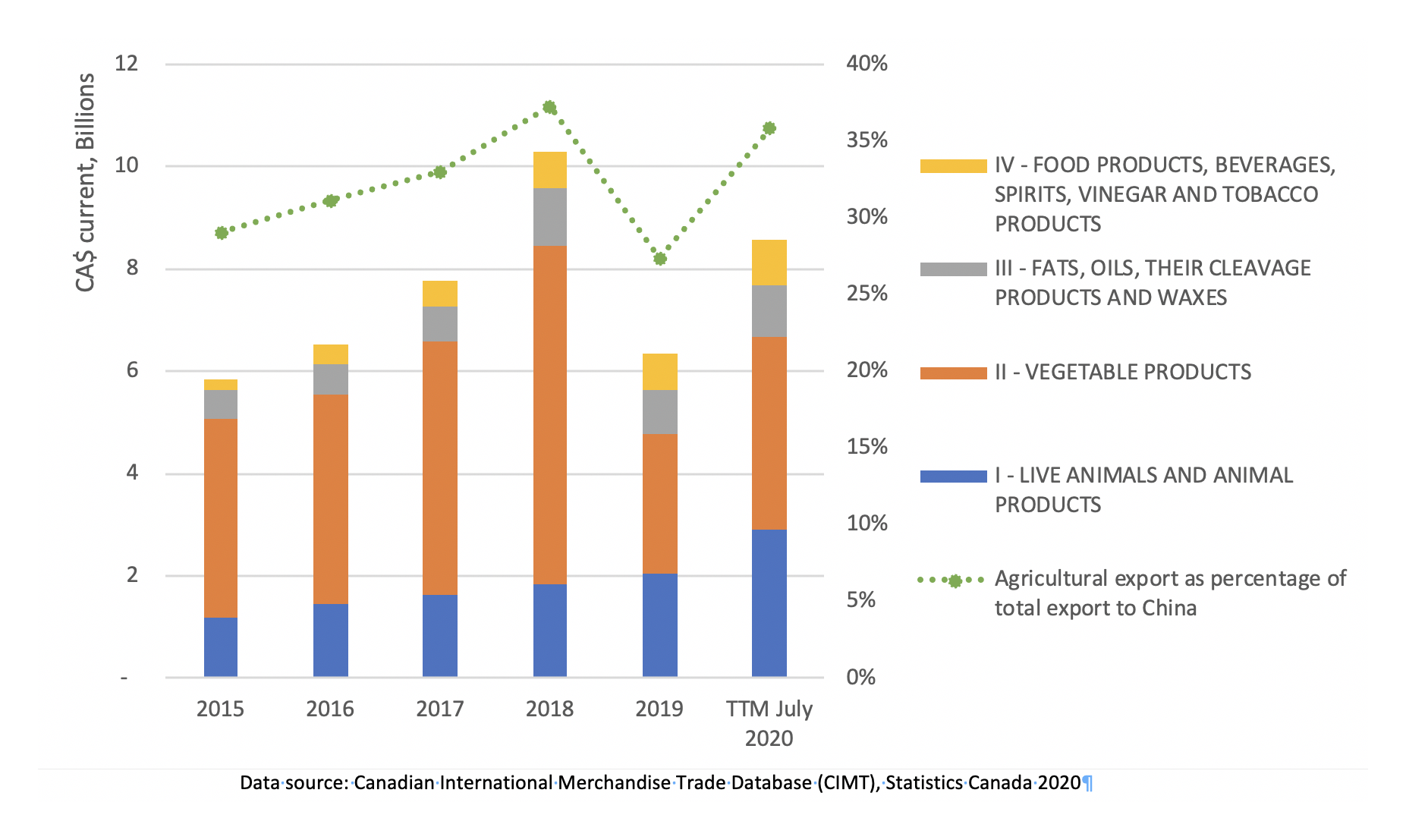 • Huawei has reportedly drafted an agreement between the company and the federal government that provides for a “no-backdoor and no-spying” agreement.

• The Australian Strategic Policy think tank has released a report on China and coercive diplomacy. The report finds that the top three countries subject to this type of diplomacy are Australia, 17 attacks, followed by Canada, 10 attacks, and then the United States, nine attacks.

• Some Canadians are urging the federal government to take similar steps as the United States in its treatment of Chinese researchers and graduate students who have ties to the Chinese military amid intelligence sharing concerns. The United States recently revoked visas for individuals they believed were part of a Chinese campaign to gain technologies for military use.

• International dairy market shares in China dropped to 23 per cent from 52 per cent in 2018 and 32 per cent in 2019. Nationalism is one explanation as Chinese demand for dairy is on the rise.

• Calgary and China briefly shared one thing this week – poor air quality. Calgary’s air quality was worse than China’s as smoke from the California wildfires drifted into the city.

In our next (what we are for now calling) Spotlight Question, we ask what the U.S. election could mean for relations between Western Canada and China and specifically trade in commodities.

Will U.S. policy towards China remain largely unchanged no matter which candidate wins the upcoming U.S. presidential election as many analysts are suggesting? How will a commodity exporter like Western Canada (ag, energy, timber, minerals, etc.) be impacted by any policy shifts made under a Biden presidency or a second Trump administration?