China reported quarterly record, year to year, GDP growth cent in Q1 2021 of 18.3 per cent. Economists predict 8-9 per cent growth overall in 2021 beating the government’s target of 6 per cent. In contrast, the United States is expected to see a 3.08 per cent annual GDP growth for 2021, according to Statista, although other estimates are as high as 6 per cent. 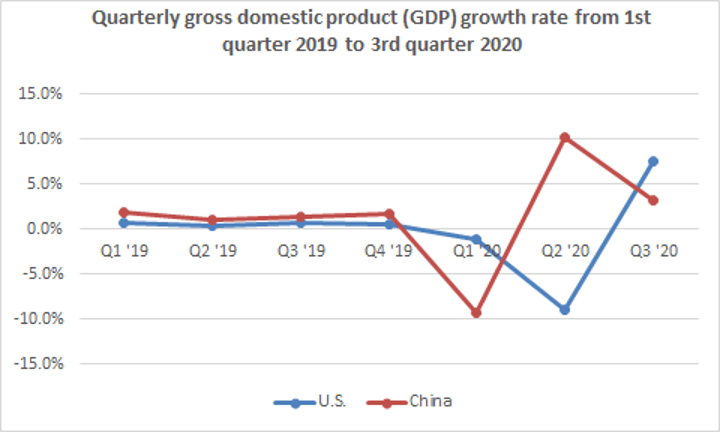 This data is a confirmation of 2020 year-end predictions from the UK Centre for Economics and Business Research (CEBR) that China was on an accelerated path to overtake the US by GDP in seven instead of 22 years thanks to a stronger COVID recovery. 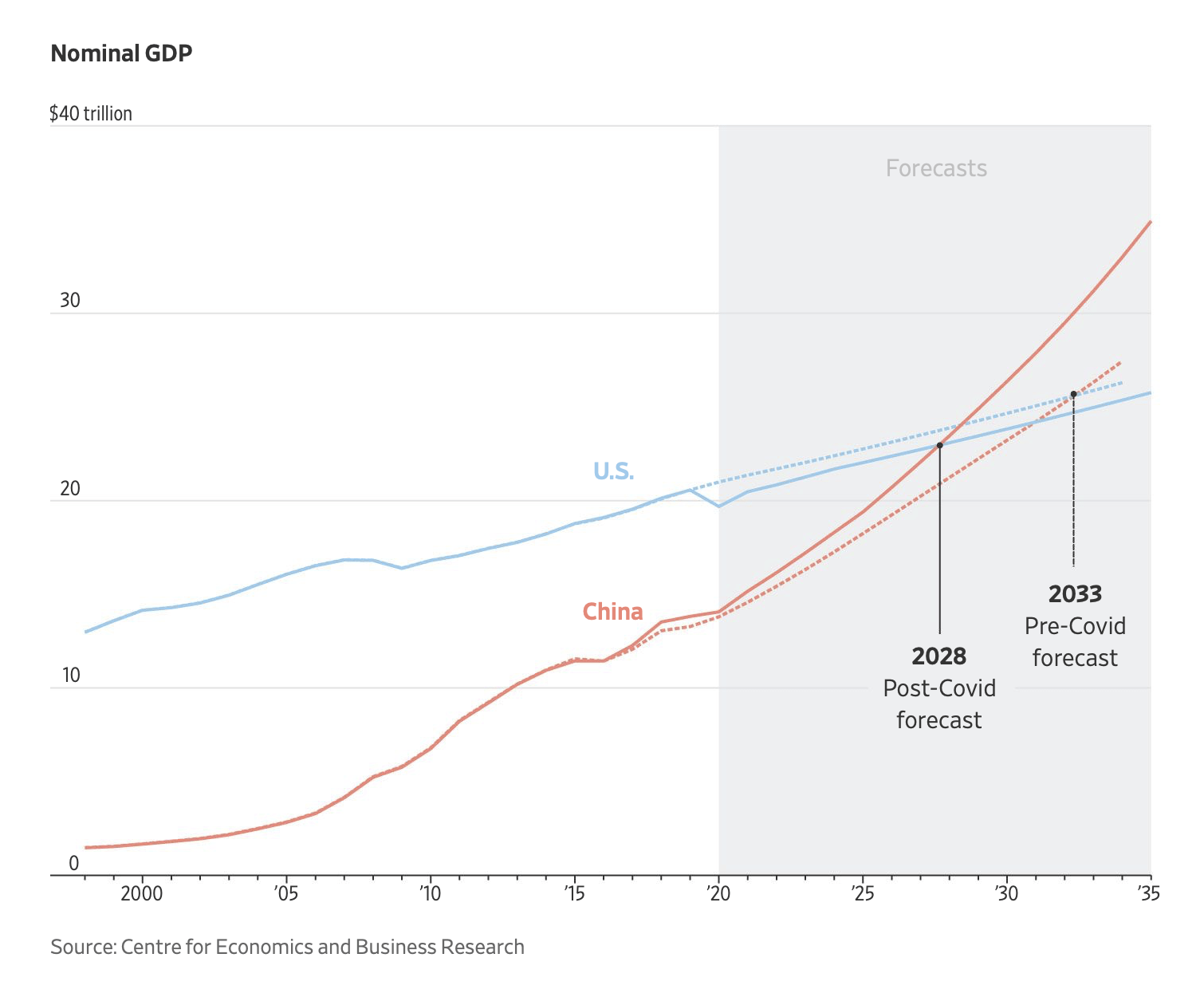 Julian Evans-Pritchard, senior China economist at Capital Economics provides some context to China’s growth, noting that “[…] this was entirely due to a weaker base for comparison from last year’s historic downturn. In quarter-on-quarter terms, growth dropped back sharply and, with the exception quarter one of last year [Q1 2020], was slower than at any other time during the past decade.” Evans-Pritchard adds that “China’s post-Covid rebound is levelling off,” and “[w]e expect quarter-on-quarter growth to remain modest during the rest of this year as the recent boom in construction and exports unwinds, pulling activity back towards trend.”

Trade data also shows increases in Chinese consumption with March imports up 38.1 per cent over March 2020, an increase from experts’ forecast of 23.3 per cent. Exports were up 30.6 per cent for the same time, compared to forecasts of 35.5 per cent. The overall trade surplus is at US $13.8 billion. The numbers show that the recovery is “reaching a more mature level” according to Paras Anand, Asia-Pacific chief investment officer at Fidelity International.

New data from Statistics Canada show that in 2020, Canadian exports of farm, fishing and intermediate food products were up 38.0 per cent to China; however, that’s still down 23.1 per cent from highs recorded in 2018.

Both the Chinese and Canadian numbers might suggest good news for exporters, particularly the agri-food sector. Container shortages are still creating challenges at the ports, which has caused exporters to lose out on international sales; lumber and lentil sales to Asia have been affected. Meanwhile, the first ever shipment of phosphate fertilizer from China to the Port of Vancouver, destined for the Prairies, arrived this month. Northern Nutrients Ltd. found the new trade route after the U.S. issued countervailing duties on Morocco and Russia product.

Insights from the Diefenbaker years on today’s China troubles

B.C. Senator Yuen Pau Woo recently gave a speech at Carleton University, “What is China to Canada,” that turned to the Diefenbaker years for insight on Canada’s current troubled relationship with China. The Senator shared the story of how the Diefenbaker government was attuned to “the plight of prairie farmers who were struggling under depressed wheat prices due to dumping on world markets by subsidized American producers;” as a result, Canada rejected US pressure to join the Americans in an embargo of grain sales to China.

“[Canada has] ALWAYS had to tread lightly with China because of pressure from the United States. The perennial challenge for Canada is to identify, clarify, and amplify the degrees of freedom we have in pursuing ties with the PRC that are in interests of our country while managing the even more important economic and political relationship with our Southern neighbour,” Woo said.

The Senator added that Canada must manage the relationship with China as a “global neighbour.” This means “[i]n some geographies and on some issues, our stance to our global neighbor should be to build a sturdy fence; in other areas, we should have an open border; yet other areas, something in between.” Woo also weighed in on a U.S. deal with Meng Wanzhou and what that could mean for Michael Spavor and Michael Kovrig. If Canada does not play a role in the deal, China may not release either Spavor or Kovrig and Canada should get involved, Woo told a Carleton University webinar recently.

The Jack Austin Centre and Simon Fraser University’s Beadie School of Business’ Fourth Canada-China Economic Forum. The forum was a rare event to make the case for Canada to engage China on new trade initiatives. In addition to the Senator, former federal Minister of Foreign Affairs John Baird, professors Bo Chen and Fan Cui, and CWF’s own Carlo Dade. Carlo focused his remarks on the need for Canada to match actions taken by Australia, the EU, New Zealand, and the US as well as an analysis of how the infamous “nothing burger” that is article 32.10 of new NAFTA agreement does nothing to prevent Canada from engaging China on trade.

The annual report from the National Security and Intelligence Committee of Parliamentarians, which summarizes the national security risks other countries pose, states that Canada’s risk from China are largely related to espionage, cyber-attack, and regional testing of ballistic missiles. Acting Chief of the Defence Staff Lt. Gen. Wayne Eyre also recently highlighted Chinese expansion into the Arctic as a potential future concern for Canada.

Member of Parliament Michael Chong, recently sanctioned by China, penned an op-ed in the Globe and Mail that urged Canada to take further action, including steps to: ban Huawei, suspend payments to the Asian Infrastructure Investment Bank, make a plan to counter threats to the domestic Chinese community and increase enforcement against diplomats, and work with allies.

Members of Canada’s Hong Kong community who are pro-democracy have reported threats from individuals who they believe are agents of the Chinese Communist Party (CCP). Those threatened say they are scared for both themselves and friends and family. It is unclear to those who experience the threats whether the local police, RCMP, or the Canadian Security Intelligence Service (CSIS) handle the case.

Members of Parliament unanimously voted on a nonbinding motion to support Taiwan’s President Tsai Ing-wen as recipient for the Halifax International Security Forum’s John McCain Prize for Leadership in Public Service. China said it “deplores and rejects the wrong motion related to Taiwan.” Politico also reported that the federal government threatened to withhold funding from the organization in 2020 if it gave Ing-wen the award; Minister of Defense Harjit Sajjan denied the story.

Vancouver Mayor Kennedy Stewart has suspended all meetings with Chinese officials over the treatment of Muslim Uyghurs in Xinjiang and the detentions of Kovrig and Spavor. In a statement to Glacier Media, the consulate responded to say “[w]e hope that the Canadian politicians and people of influence can take off their tinted glasses, respect the truth and the legal system of China and the development path chosen by the Chinese people, remove instead of setting up obstacles in the relationship between our two countries.”

China issued its fourth ASF outbreak notification since January. Hunan province is the latest region to be affected. The latest outbreaks have ravaged herds with estimates of 20-25 per cent of herds in the north parts of the country to be affected. Henan province lost an estimated 20-30 per cent of its breeding sows alone. The recent outbreaks could even slow soybean meal and feed grain imports.