By Sharon Zhengyang Sun and Carlo Dade with contributions from Deborah Elms, executive director of the Asian Trade Centre

Deborah Elms, a colleague and occasional collaborator of Canada West Foundation and executive director of the Asian Trade Centre in Singapore, has produced an in-depth quick take explaining the RCEP which we’ve included below our short first take on what it means for Western Canada.

What does the RCEP mean for Canada and Western Canada?

A preliminary look at introducing the RCEP to the region shows a spaghetti bowl effect with no significant trade gains within the region, as every country in the bloc already had some form of bilateral and/or regional trade agreements with each other prior to the RCEP. Indeed, this was a pre-requisite for being part of the negotiations.

Canada already has a bilateral agreement with South Korea, as well as agreements with Japan, Vietnam, Singapore, Malaysia, Australia and New Zealand under the Comprehensive and Progressive Agreement for Trans-Pacific Partnership (CPTPP). From this perspective, RCEP is unlikely to have significant impact on Canadian trade with the region. The biggest possible loss in trade opportunities for Canada under the RCEP may be with China and to a lesser extent, Thailand, Indonesia, and the Philippines.

The RCEP is an additional blow to Canada’s trade future with China, where the current relations is already at an all-time low and where very specific Canadian agricultural sectors have been harmed. For China, RCEP is symbolic in furthering stability in the area, geo-politically and economically, as well as enhancing regional supply chain integration. The regional nature of the RCEP is consistent and integrates well with China’s regional strategies, such as the Belt and Road Initiative, which has further implications on Canadian trade – particularly a possible shift in Chinese demands for Western Canada agricultural exports.

Finally, for a country that is reliant on trade and that seeks trade expansion and diversification, Canada needs to be more present in the fastest growing region in the world. Figure 1 shows the current two-way trade shares Canada has with the key blocs in 2019. With only recent exploratory discussions on a Canada-ASEAN free trade agreement, being late to the table and not participating in the bloc implies further falling behind on Canada’s part in competing with its allies in the Asia Pacific region. 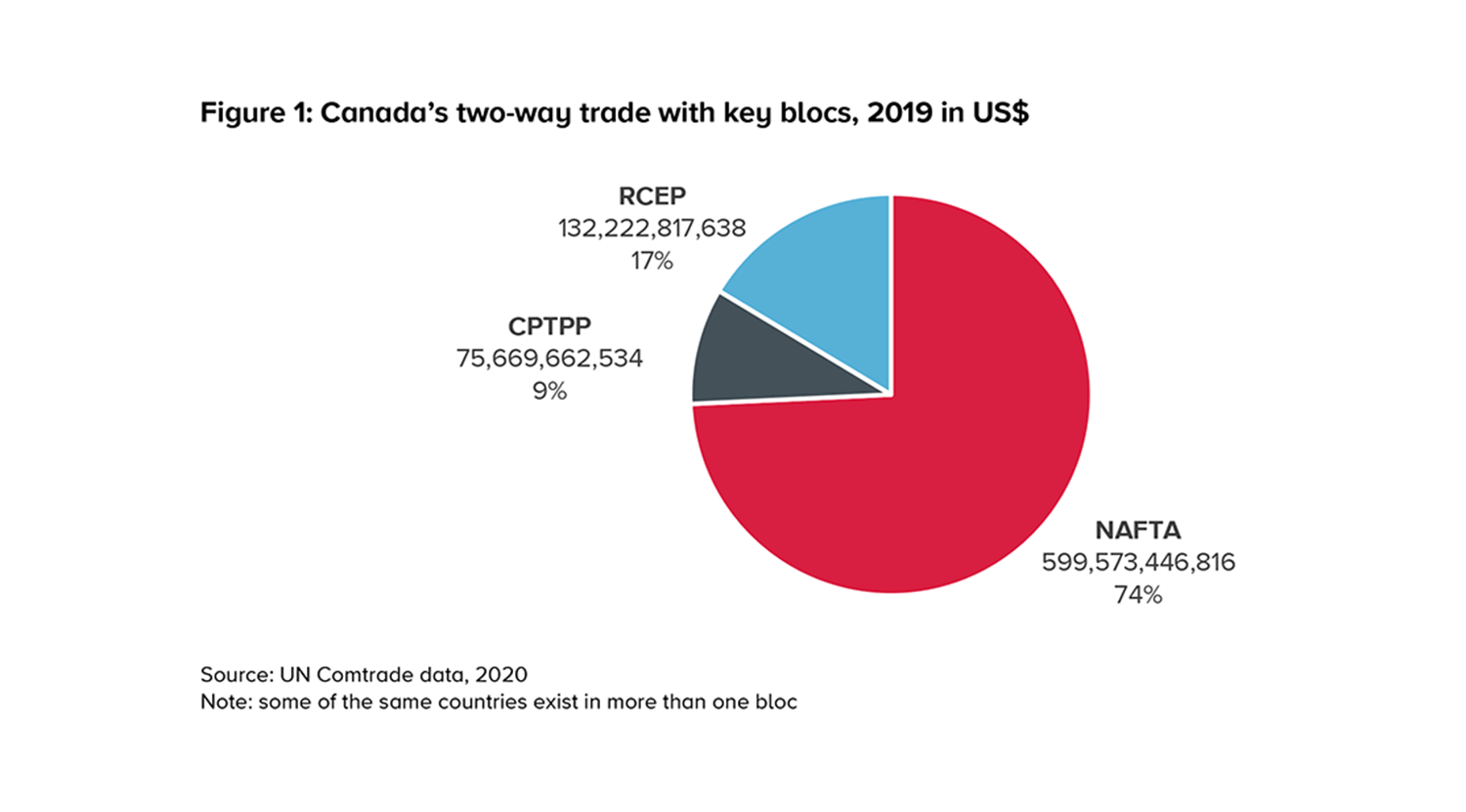 The recent signing of the RCEP is an indication that our allies, who are also our competitors, are not pulling away. Our competitors are not only engaging ASEAN but continue to engage with China. Despite the recent trade tensions between China and Australia, the signing of a new pact gives Australia yet more ways to engage China. Despite tensions amidst the trade war, the U.S. signed a bilateral Phase One agreement with China that addresses structural changes benefiting American farmers at the expense of Canadian farmers.

Comparing two-way trade flows, Canada does not trade nearly as much as Australia with China, ASEAN and the RCEP partners (Figure 2). This is reasonable as Australia is geographically closer and much more reliant on trade with the region. However, by being late to the table, Canada will lack the supply chain integration that Australia and New Zealand will have with ASEAN, China and the regional bloc.

Figure 3 compares the Top 20 Canadian export sectors in ASEAN and Top 30 Canadian export sectors in China with Australia and New Zealand. For ASEAN, Australia has a competitive advantage and exports more than Canada in 13 of Canada’s top exports with ASEAN. New Zealand only has a competitive advantage and exports more than Canada in one area with ASEAN – wood and articles of wood. On the other hand, Canada has a competitive advantage over Australia and New Zealand in the majority of its Top 30 key exports to China. Australia only exports more than Canada in eight areas with China and New Zealand only two. The data shows that there are many common sectors that Canada, Australia, and to a lesser extent New Zealand, exports to ASEAN and China. In the case of ASEAN, where Australia and Canada have more areas of competition, further supply chain integrations under the RCEP would mean further falling behind for Canada. In the case of China, the further integration initiated by RCEP may threaten the areas where there is currently less competition and where Canada currently exports more. Finally, while there are some areas of immediate competition identified, there are many sectors in which Canada does not compete with New Zealand and Australia, presenting opportunities to cooperate and complement each other. This signals the opportunities the RCEP bloc presents to Canada. This also signals the importance for Canada to work with Australia and New Zealand, under the CPTPP, to bridge their supply chain presence, network and know-how to access markets for both products that Canada is already good at and has a strong presence in, as well as products that Canada has a lesser presence in the market.

The RCEP is a weaker agreement than the CPTPP in terms of rules and ambition. But it is nonetheless more important as a convening of major markets of importance to Canada. Australia and New Zealand, for example, have gained yet another forum in which to engage China, Japan, Indonesia, Malaysia, Vietnam and other markets to settle trade disputes, advance market access and build the relationships from working on a common project that signals commitment to the region.

This makes the CPTPP agreement all the more important for Canada. Canada was not a leader in resurrecting the TPP after the Americans withdrew. Just the opposite, as the country almost torpedoed the agreement at the APEC meeting that was supposed celebrate its completion. In so doing, the Canadian government publicly embarrassed the Japanese Prime Minister, who had invested personal political capital in the negotiations, and infuriated the Australians. This coupled with a history of disappearing from the region makes Canada’s entry into other regional forums more difficult. It also makes the performance of one of the few blocs of which it is a member all the more important.

This also makes a coherent, long-term strategy for the region – Pacific rim, Asia Pacific, Indo-Pacific or however it is defined, all the more critical. To gain entry to the RCEP, Canada would first need an agreement with ASEAN, something that has dragged on for ages and shows no sign of shifting out of park. A coherent and long-term strategy for the region would require focus of resources and political capital for a process that is as long as negotiating two sequential multi-lateral agreements. This may mean redirecting trade and diplomatic resources from other areas of the globe like Africa and the Americas.

Finally, the RCEP negotiations contain an important warning for Canada about trade negotiations with India. A major reason the RCEP took so long to negotiate was Indian trade demands. Chief amongst these demands after IT and a manufactured goods trade imbalance with China, and much more politically sensitive was agriculture. The fact that the RCEP, a deal in which China is a major player, could only proceed once India dropped out is a warning on how difficult a negotiation with India may be with Canada.

What is next for research?

While the preliminary surface research shows that the RCEP may not have significant trade gains in the bloc and is more symbolic of a further regional integration and stability, more in-depth analysis is needed. Specifically, there needs to be work done to compare the tariff schedule differences between the RCEP bloc and the individual bilateral and/or regional trade agreements each RCEP member has with each other prior – e.g. compare Japan’s tariff schedule with Australia under the CPTPP with the RCEP, China’s tariff schedule with Australia under ChAFTA with the RCEP, and compare South Korea’s tariff schedule with Australia under their bilateral agreement with RCEP etc. – in order to fully and quantitatively understand the level impact the new RCEP has on Canadian and western Canadian trade. Analysis also needs to be done in understanding whether there are new non-tariff barrier provisions and benefits that may put Canada at a disadvantage – particularly the impact of western Canadian agriculture with China. 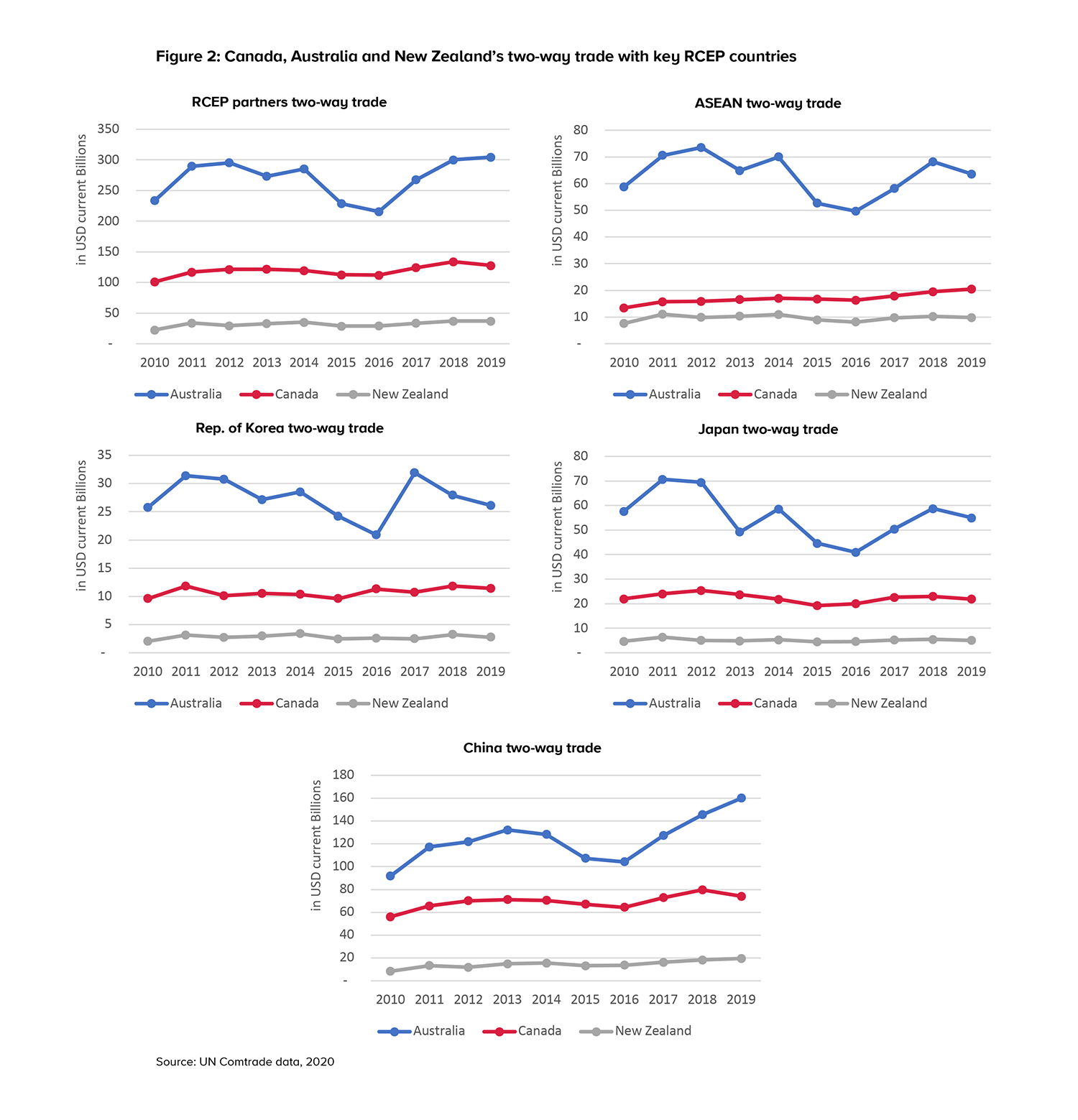 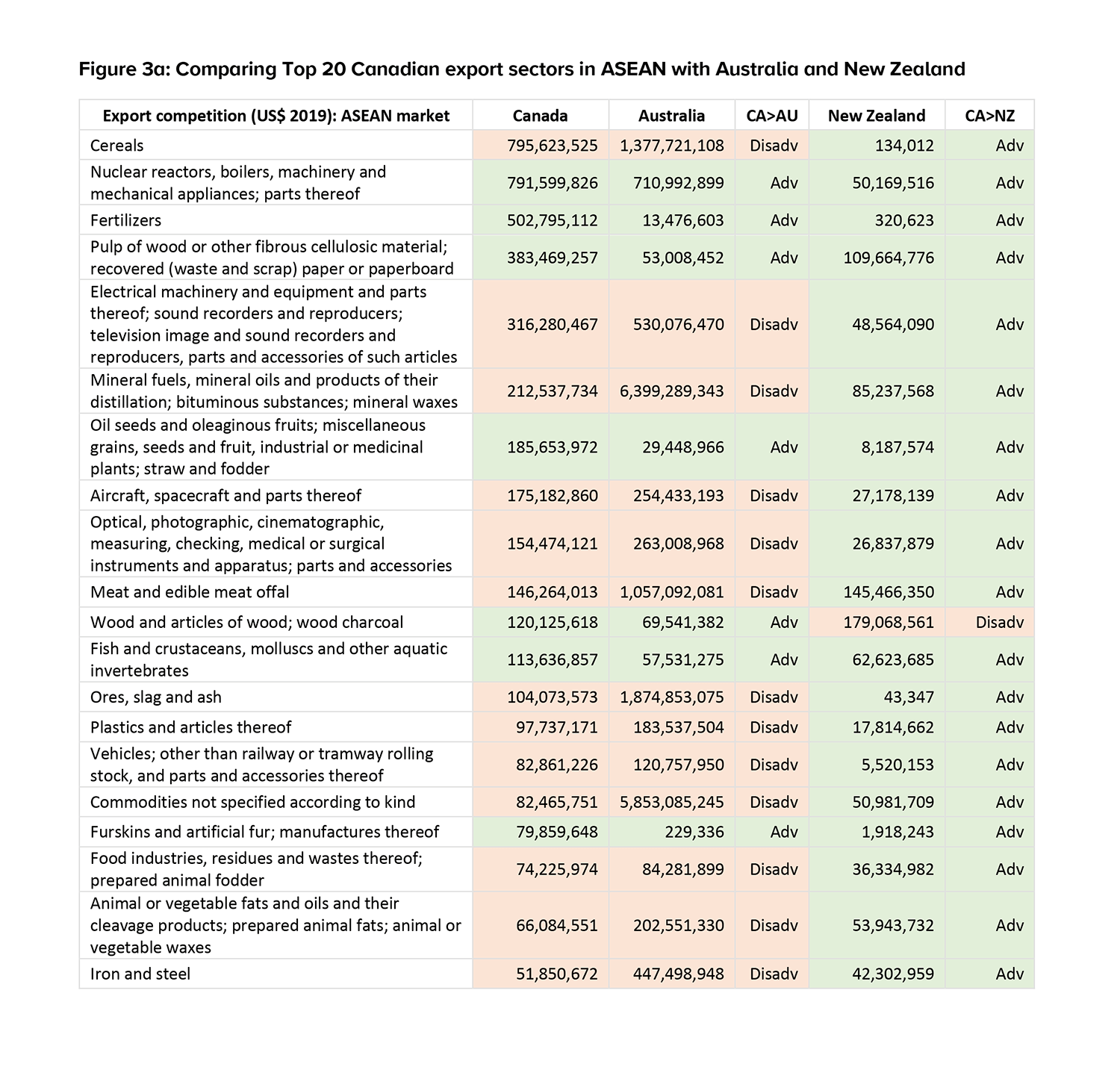 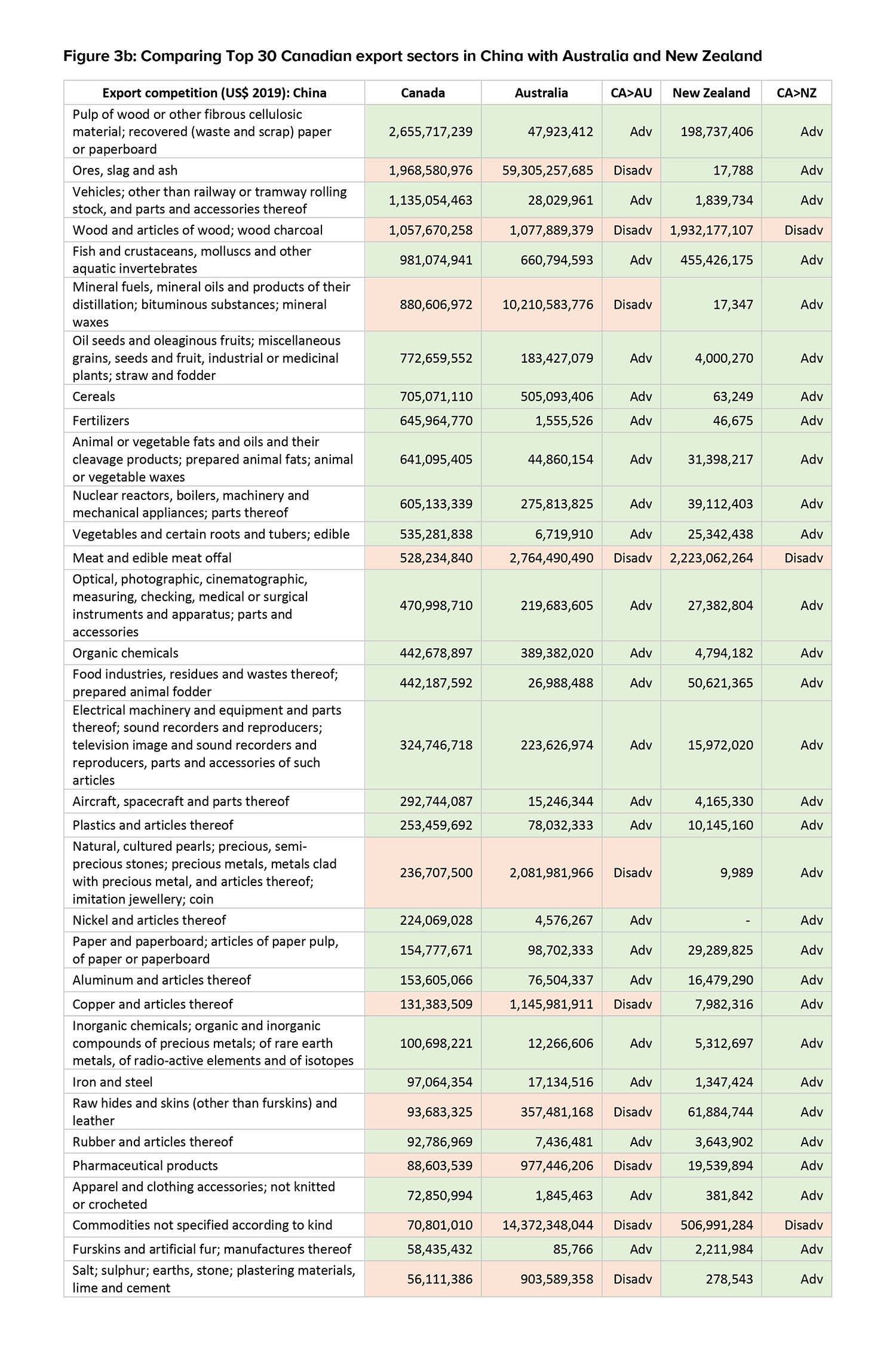 RCEP: A first look at the texts

The 15 countries in the Regional Comprehensive Economic Partnership (RCEP) held an elegant virtual signing ceremony on November 15, 2020.  The relevant texts and schedules were released shortly afterwards and can be searched here.

The Asian Trade Centre will be delving more deeply into the specific details and producing a series of materials to help companies get ready to use the agreement.  For now, here is my first quick technical assessments of the agreement.  Note that this early look should not be taken as the definitive guide, as an agreement with 20 chapters across 510 pages and thousands of pages of associated schedules will take some time to unravel.  To get a sense of the task ahead, the Korean tariff schedules alone run to 2743 pages.

Compounding the difficulties of making a quick assessment: governments can be quite creative in burying important details inside of different provisions.  Flexibilities and exceptions, in particular, are going to be tough to note, understand and unravel.

RCEP will, of course, have important implications for trade in the region, for economic integration and for the future of trade policy.  This post, however, will focus on the details of the agreement itself.

Many of these chapters were not included in the underlying ASEAN+1 agreements that formed the original core of RCEP.  Getting these negotiated took significant time, which is partly why RCEP has taken 8 years to reach conclusion.

RCEP also represents the first time that many members have engaged in this sort of trade arrangements: especially between China, Japan and South Korea.  As expected, this created additional friction as officials grappled with managing outcomes.