The one thing that the October 2019 federal election appeared to make clear was just how regionally divided the country had become. The Liberals were shut out of Alberta and Saskatchewan, the Conservatives fared almost as poorly in Toronto and Montreal, and the sovereigntist Bloc Québécois rebounded to form the third largest party in the House of Commons. With no party having an overall majority, none of the issues that drove the campaign, such as how to mitigate climate change, were settled.

An in-depth look at public opinion, however, casts doubt on the conclusion Canada is more regionally divided than ever. Certainly, Canadians are divided on how best to balance the environment and the economy. But the 2020 edition of the Confederation of Tomorrow survey shows that this division of opinion does not pit one region against another. It exists within every part of the country.

At the start of 2020, a slight majority of Canadians (52 per cent) agreed that protecting the environment is more important than protecting jobs. But what is most striking is that, across the country, agreement was either just below or just above 50 per cent, rather than heavily weighted to one side or the other. Alberta is no different: the province is split right down the middle, with almost as many agreeing as disagreeing with the proposition.

About one in two Canadians (48 per cent) also favour a gradual phase-out of the use of fossil fuels so that we can move to more renewable sources of energy without suddenly putting people who work in the oil and gas industry out of work. The remainder are split between an accelerated or delayed phase-out.

But again, Canadians are less regionally divided than might be expected. In every jurisdiction, a plurality favours a gradual phase-out of fossils fuels. Agreement with this compromise option ranges from 41 per cent in P.E.I. to 54 per cent in B.C. In Alberta, 44 per cent favour this option, which is only slightly lower than the national average.

Where differences emerge is on the second-place choice. Twenty-eight percent of Quebecers favour a more rapid phase-out, even at the cost of jobs in the oil-and-gas sector, compared to only 10 per cent in Alberta. Conversely, 37 per cent of Albertans, say we should delay any phase-out and focus on protecting the jobs of people who work in industries like oil and gas, compared with only 10 per cent in Quebec.

To put these figures in perspective, imagine putting 100 Albertans and 100 Quebecers in a room together and asking them to discuss how quickly we should phase out the use of fossil fuels in order to address climate change. Sixty-four people from each province could find someone from the other province who held the same opinion as them. Another nine on each side could find a partner who, like them, was undecided. That leaves 54 people out of 200 who would be left facing someone who disagrees with them, perhaps strongly, on whether we need to speed up or slow down the transition to renewable source of energy. 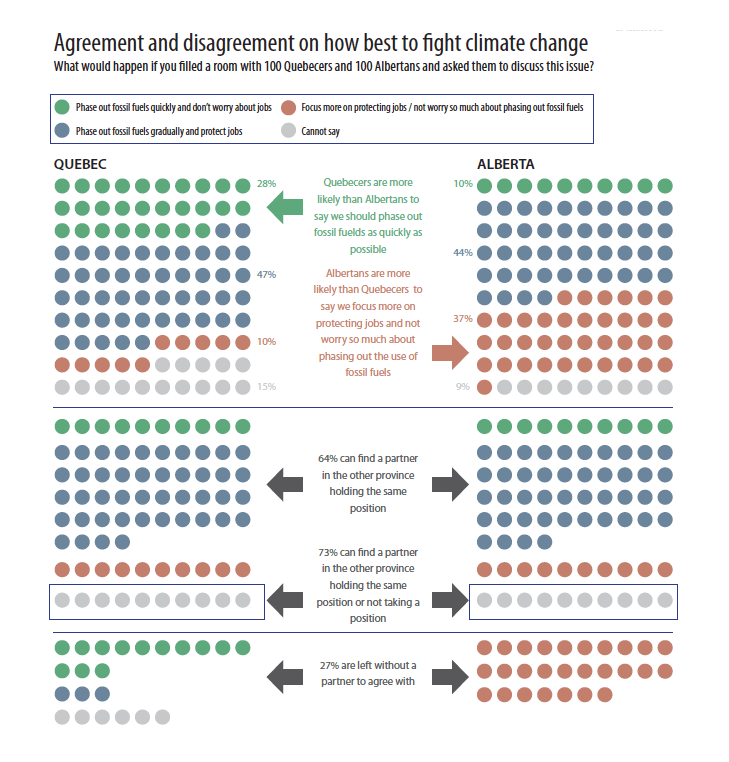 These differences are important. But just as they should not be swept under the carpet, they should not obscure the fact that 146 of the 200 people in the room (73 per cent) would have no quarrel with their partner from the other province.

There are good reasons why our regional differences tend to be exaggerated. The electoral system is one—by painting whole regions of the country in one colour, it obscures the diversity of opinions that lies underneath. Entrepreneurial political leaders are also adept at mobilizing those differences that do exist to their electoral advantage. And first ministers like to present themselves as championing the positions of their entire constituency, when in fact a significant portion of the citizens they represent disagree with their approach.

These political manoeuvres are understandable, but the public and the media should look beyond them. The conclusion of the Confederation of Tomorrow survey is not that we are all on the same page. It is simply that divisions on key issues like how to fight climate change exist right across the country. This may sound like a strange way to think about national unity. But acknowledging the diversity of views in every region is a good first step to defusing the political tensions that sometime threaten to tear us apart.